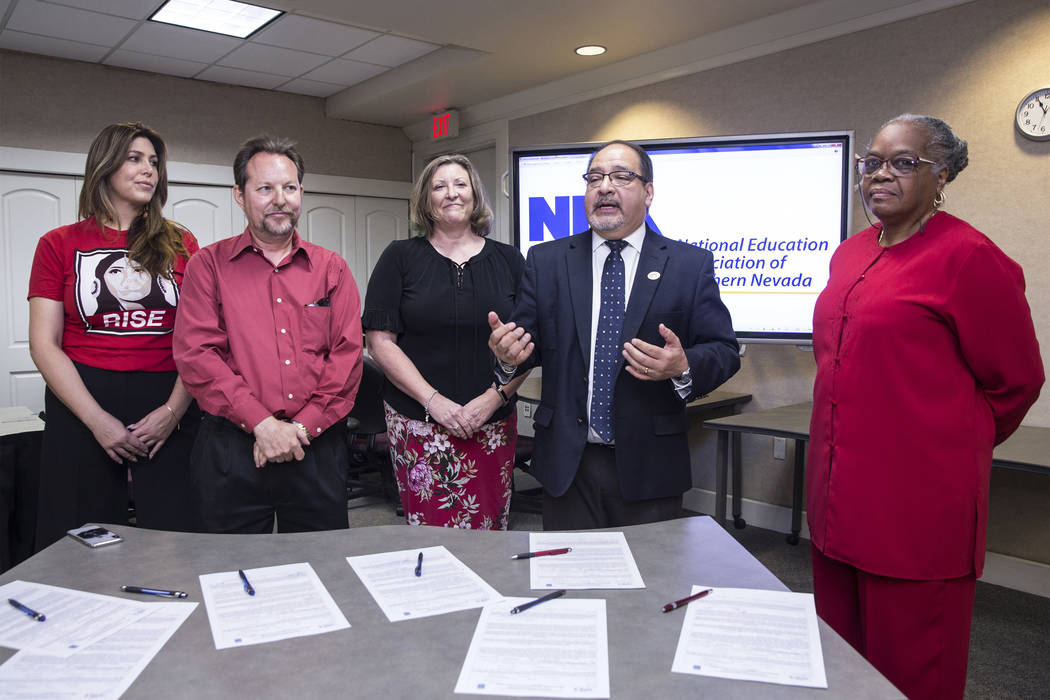 For some teachers, requesting that they choose between dueling local unions is akin to asking a small child to pick which divorced parent to live with. It’s an exercise certain to inflame emotions and deepen the divide that led to the split in the first place.

For teachers looking to switch, the issue is about more than money, however. Some say they want representation that is more responsive to their needs and respects their opinions.

But others see no value in moving to the new local, noting that it has no power to bargain on their behalf and would likely continue to siphon local resources to the state organization.

The CCEA is the formal bargaining unit with the school district, but supporters of the new union, referred to by the acronym NEA-SN, hope it can eventually wrestle control of that coveted position by capturing the allegiance of a majority of the district’s teachers.

Starting a new, competing union is a common tactic in school districts where the local unit has disaffiliated itself from the state organization, said Mike Antonucci, director of the Education Intelligence Agency. Few of the competing unions have successfully taken over the bargaining rights though.

“Ousting an incumbent union is a tall order, regardless of whether it is affiliated or independent,” said Antonucci, who describes himself as a one-man contract research firm studying the inner workings of school unions nationwide.

Teachers are weighing their options, relying on history, personal relationships and promises made by leaders on both sides to decide where to send their dues.

In a normal year, about 1,000 teachers leave the CCEA, including those who retire, move to another district, leave the profession or decide that they’re not getting enough for their money and drop out. Whether or not that number grows this year, both sides are settling in for a years-long fight for the loyalty of the district’s teachers.

Vicki Kreidel, a second-grade teacher at Fred Watson Elementary School in North Las Vegas, is pledging her support to NEA-SN. In an interview with the Review-Journal, she said it’s tough for teachers to choose but her relationships with leaders of the new union helped her decide.

“Trying to figure out who is telling the truth is so difficult,” she said. “Some people are comparing it like some parents divorcing. How do I choose when I don’t even know who to believe? I’m fortunate, I know who to believe. I was there from ground zero.”

Kreidel joined the CCEA when she moved from California to Nevada in 2013. She quickly realized how different things were here, she said. She had trouble reaching leaders to get information, was frustrated that negotiations always went to arbitration and she didn’t like the bickering between the state and local leaders.

The new union has a different feel, she said. As part of the recruiting effort, Kreidel suggested NEA-SN members hold informal coffee meetings to with teachers to talk about their organization. Leaders took the idea and ran with it, and it’s become one of the group’s main recruiting techniques.

Debra Cooley, also a second-grade teacher, traces her dissatisfaction with CCEA to what she considered unsatisfactory testimony during the 2017 legislation session when lawmakers were deciding how much of a student’s state test score should factor into a teacher’s performance evaluation.

She also noticed that the local and state unions often testified on opposite sides of the same bill.

“I felt like they were weakening our position as teachers by not working together. That became a big problem for me,” she said.

A history of success

But other teachers say they’re satisfied with the progress CCEA has made and that sticking with the union that has the exclusive bargaining power is the right choice.

David Tatlock, a business and industry teacher at Mojave High School, said CCEA’s success has been obscured by decisions made by the Clark County School District, including fighting in court to overturn a recent arbitrator’s decision awarding teachers pay increases.

“Amid all that fighting, CCEA has actually won a number of good decisions,” he told the Review-Journal. “If CCEA hadn’t won … people don’t realize what their pay and working conditions would be like.”

Dan Barber, a social studies teacher at Arbor View High School, said he was dismayed by the resources leaving Clark County. About 70 percent of the total money he paid left the district, he said.

“The services our union was trying to provide to our members, we weren’t able to provide those adequately without a reallocation of resources. That’s how it began,” Barber said of the dispute with the state union.

Unless membership drops below 50 percent — and it currently appears to be holding steady around 60 percent, Barber said — CCEA will retain the exclusive bargaining rights with the school district. And because negotiated agreements affect all teachers, whether they are dues-paying union members or not, that’s a strong reason to stand fast and get involved, he said.

“A union is a union because they have the ability to represent the bargaining unit, they can sit and hammer out all the details. They (NEA-SN) don’t have that,” Barber said.