Superintendent returns to board meeting 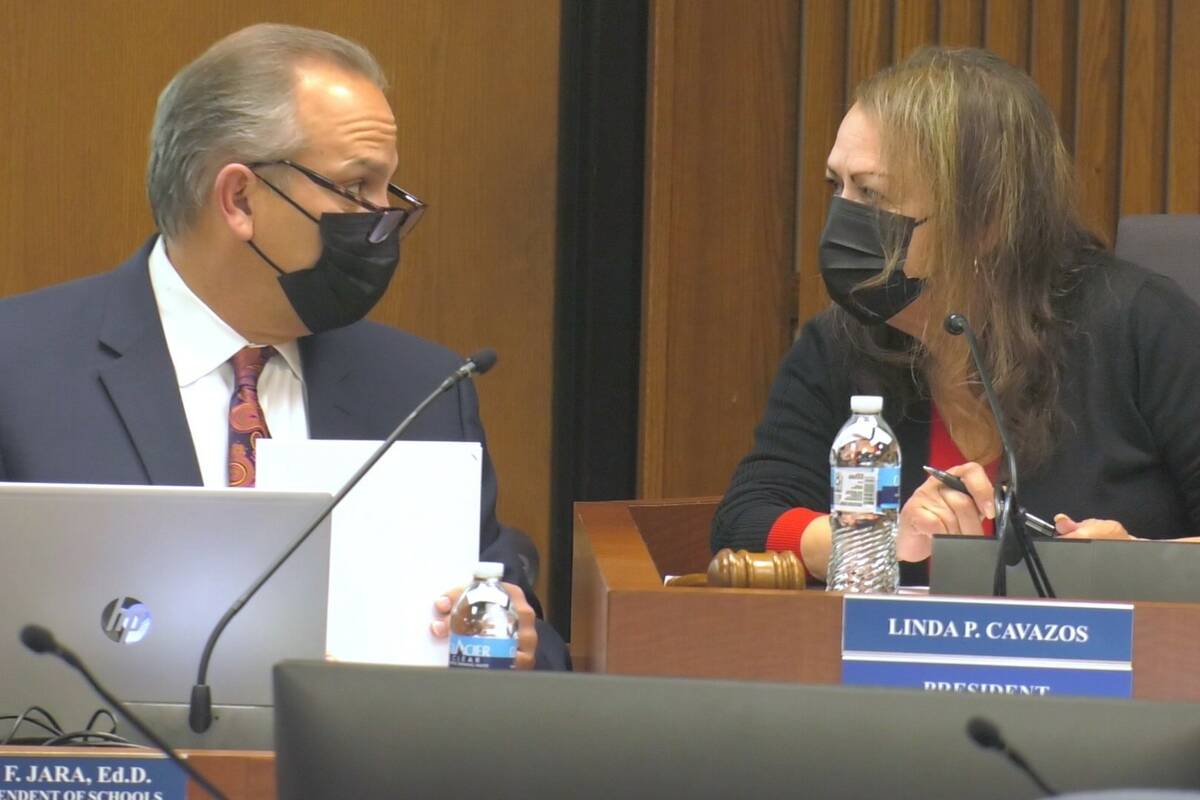 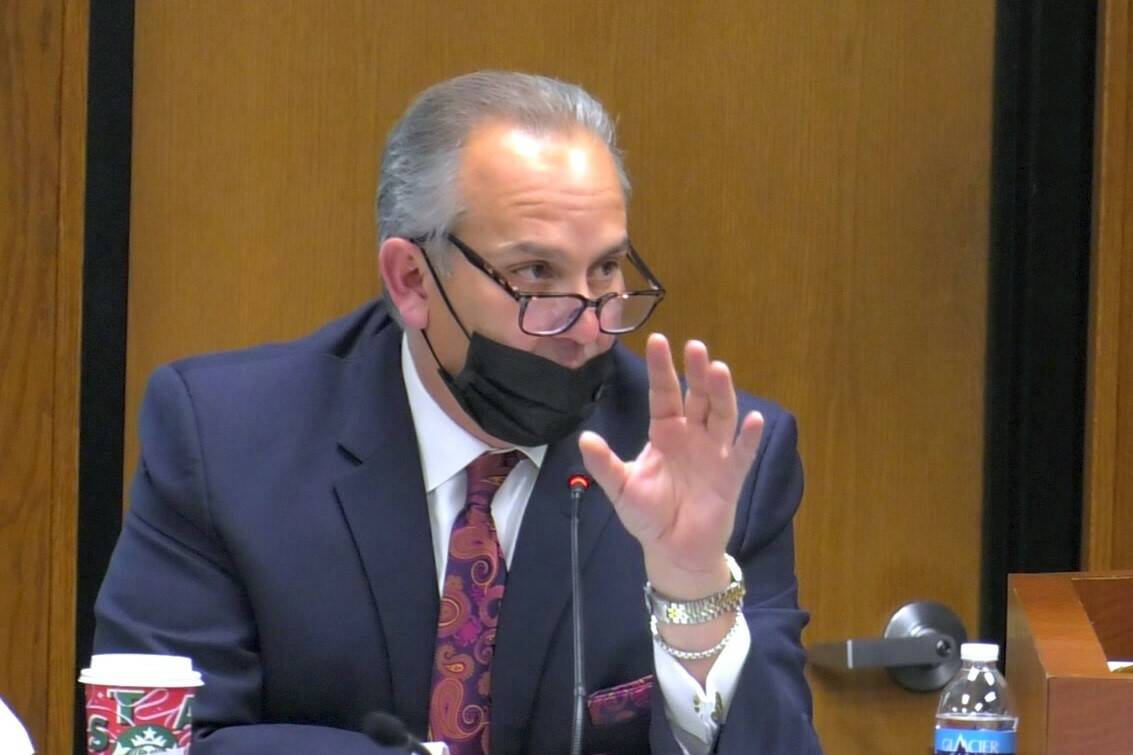 The Clark County School Board voted 6-1 on Thursday to approve four recommendations for the “transfer of responsibilities,” an item related to the state’s 2017 reorganization law.

After more than an hour of discussion and public comments, Trustee Danielle Ford was the lone vote in opposition.

The reorganization law was designed to give individual schools more control over decisions in areas such as staffing and budgets.

Many public commenters expressed opposition to the recommendations — some of which return functions from schools to the district’s central office — saying they believe it goes against the intent of the law.

The school district “wishes to implement service level agreements” only in cases where they can be implemented “in support of providing equitable and adequate services to all students and schools,” in partnership with principals and with assistance from their school organizational team and in full compliance with Nevada Administrative Code, according to online meeting materials.

Superintendent Jesus Jara said the changes won’t get the school district into full compliance but that it’s a step forward and a process the district will be working through.

Changes will become effective for the 2022-23 school year and will be reflected in school budgets released next month, said Kellie Ballard, chief strategy officer for the school district.

The district received about 270 responses from school organizational team members to an electronic survey seeking input on the recommendations, Ballard said.

One of the recommendations, which drew the most questions and concerns, was “the transfer of responsibility for all remaining responsibilities currently transferred to schools under a service level agreement from schools back to central office.”

Trustee Lisa Guzman said she wanted to clarify the recommendation, noting the wording may have been unclear to the public.

Another recommendation was transferring responsibility to schools for English language learner placement testing personnel services “without the requirement to purchase services from the District under a service level agreement,” according to meeting materials.

The recommendation will affect nine district employees who will be encouraged to seek opportunities for promotion or transfer to another position. If that’s not possible, they will participate in the surplus process, Ballard said.

Ford said that during a joint meeting in late September with the School Board and state Board of Education, the state was clear the district needs to “get it together” and follow the reorganization law as closely as possible.

She said the agenda item isn’t getting the district any closer to building a relationship with the state and ensuring the law is met to the fullest possible degree.

Only a handful of school organizational team members were consulted about the recommendations, Ford said, noting she wished the district had talked with the Nevada Department of Education or state legislators involved in the creation of the reorganization law.

Jessica Jones, a kindergarten teacher and chair of the SOT at Hickey Elementary School, said she strongly opposes the agenda item.

One of the concerns, she said, is “why are we doing this right now?”

The district has never had a desire to implement the reorganization law, Jones said, noting the agenda item would go against the entire purpose of the law by “recentralizing things.”

Ed Gonzalez, a community member on the SOT at Hickey Elementary, said he strongly opposes parts of the recommendations.

The idea with service-level agreements was to put that back to schools — “not what the district thinks schools should have,” he said.

Kamilah Bywaters, president of the Las Vegas Alliance of Black School Educators, said it doesn’t make sense to give more power to the district’s central office when it’s not able to handle the power it has now.

There’s a clear disconnect with what’s happening in the central office and at schools with students and parents, she said.

It’s important for school leaders to have the autonomy to make decisions that are necessary for their campuses, Bywaters said.

Thursday was Jara’s first appearance at a School Board meeting in six weeks. The board terminated his contract in late October and then rescinded its action three weeks later.

Fewer than 60 people were in the audience for most of the meeting — significantly fewer than some other recent sessions.

A few public commenters expressed concerns related to THT Health, the health insurance provider for teachers and other licensed professionals and their dependents.

Diana Battista said school district staff are being told the list hasn’t changed under CerpassRx, but now there are medications that aren’t being covered and employees are being asked to try low-cost items that don’t work for them and their individual needs.

THT Health needs to fix its list for the health and safety of employees, Battista said.

Vicki Kreidel, a second-grade teacher and president of the National Education Association of Southern Nevada, said changes at the health trust are making it difficult for educators to manage some of their medical conditions.

She said she understands it’s necessary to cut costs but raised issues such as educators having to fully pay for lab tests out of pocket until they reach their deductible. They’re opting to go without instead, she said.

The list of covered medications also changed though educators are being told repeatedly it hasn’t, Kreidel said.

Tom Zumtobel, CEO of THT Health, said that the health trust faces significant challenges and it will take some time to work through those. He said the work is far from over and the trust will continue to work to regain the confidence of educators.

Previous leadership was the problem — not the current plan, Zumtobel said, which he described as being one of the best plans in the community.

The trust currently owes providers $36.4 million for unpaid claims — a more than 30 percent improvement, he said.

After a campaign rolled out to help educators who are in collections due to unpaid medical debt, 44 members identified themselves as in being collections, Zumtobel said, noting the health trust is working diligently to correct their situations.

No educators have been identified as being sued, in bankruptcy or other legal situation due to THT Health debt to providers, he said.