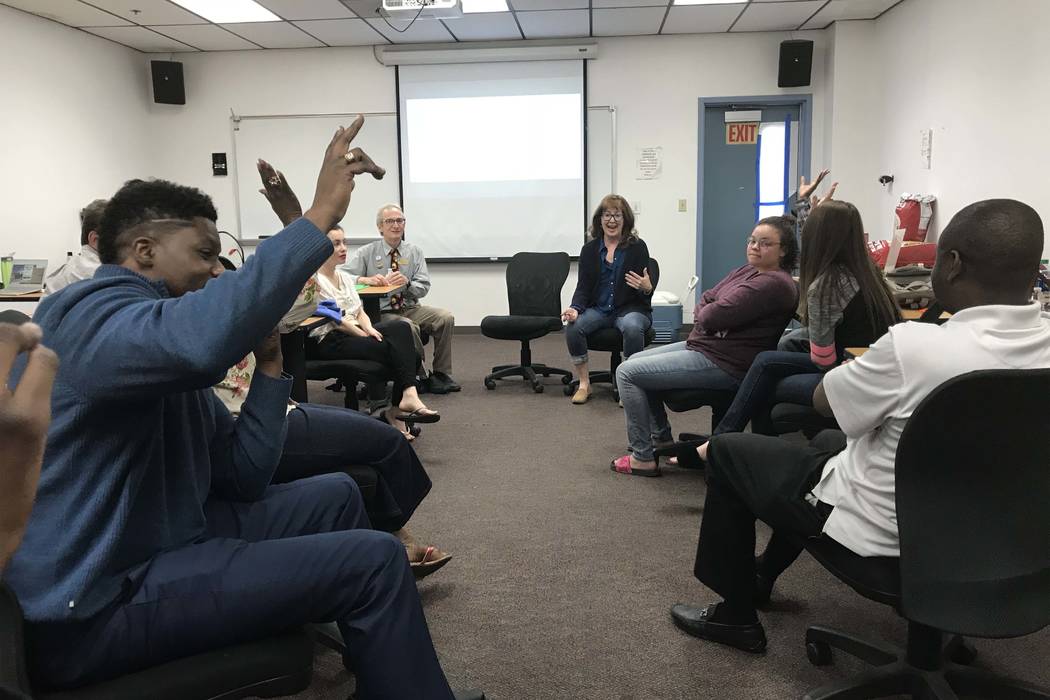 College of Southern Nevada English professor, Laura McBride, center, leads a discussion in her classroom on CSN's Henderson campus on Thursday, March 8, 2018, after a screening of the movie "Get Out." The movie screening was part of a series of events being held across the college this year as part of the One Book/One College program, which asks members of the campus community to read the book, "The Immortal Life of Henrietta Lacks." (Natalie Bruzda/Las Vegas Review Journal)

The story of Henrietta Lacks began almost 100 years ago, but professors at the College of Southern Nevada are working this year to revive and bring meaning to her story through a new campus-wide program.

Lacks became the subject of a book, “The Immortal Life of Henrietta Lacks,” decades after doctors harvested her cells without her knowledge or permission. And her family was never compensated.

Her story is now being read and shared across CSN through the One Book/One College Program.

“It’s about the first immortal cell line, which led to all sorts of advances in the sciences,” said Kody Lightfoot, founder of the program and an English professor at CSN. “Doctors didn’t ask for her consent, and they didn’t tell her family. The book is about who this woman was and how this affected her family.”

It’s the college’s second foray into the One Book/One College program, which Lightfoot hopes will promote literacy and discussion in and out of the classroom. Nevada State College has implemented a similar program.

“They’re instantly connected to it,” Lightfoot said of her students. “They loved talking about it and learning about a woman who no one knew about, asking, ‘How come no one knew about this?’ It’s been really great.”

But while her students love the book, Lightfoot said the program is about more than a topic discussed in one class.

“The goal is to get more people reading this book,” she said. “We want more people involved. English, communication teachers, biology teachers and adjuncts — that’s the dream, that it will be used cross disciplinary.”

Chelsey McKenna, a biology professor at CSN, said Lacks’ cells — known as HeLa cells — have had a profound impact on science.

“Without HeLa cells, we would still be suffering from polio,” she said. “Nobel Prizes have been won because of the research done on her cells.”

McKenna said she’s used Lacks’ story to spur discussions about medical ethics, and is also hosting a speaker next week, Dr. Ken Rosenthal, who will give a talk on cell line contributions.

In addition to Rosenthal’s upcoming lecture, other faculty members have jumped in to host activities related to the book, including movie screenings and hikes.

“As soon as I announced it at a dean’s meeting, at the snap of the fingers we had a committee,” Lightfoot said. “Everyone contributes. It came together organically because the faculty members wanted it.”

On a recent afternoon in English professor Laura McBride’s classroom on the Henderson campus, a group of about 14 people gathered to watch the movie “Get Out.”

McBride, and those gathered, discussed the racial and medical ethics questions raised by the movie, which are also issues that run parallel to the novel. She opened the discussion by saying it can be scary to have conversations about race.

Kathy Jackson, a business management student at CSN, said people have made assumptions about her based on her race, like her voting record.