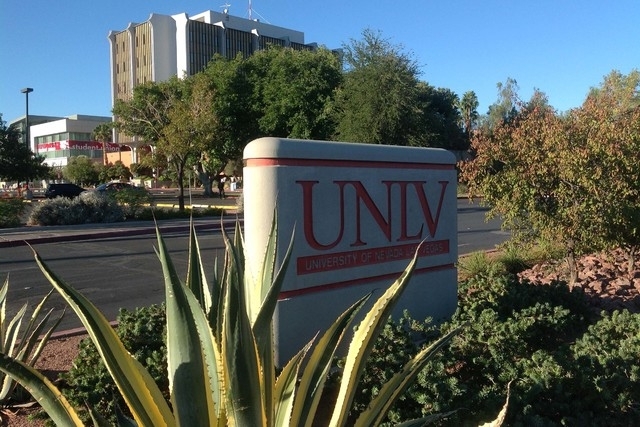 The Maryland Parkway entrance to UNLV is shown in this August, 2013, file photo. (Las Vegas Review-Journal)

The business school of the University of Nevada, Las Vegas this year boasts a higher ranking among the nation’s top undergraduate business programs, according to 2016 college ratings released today by U.S. News & World Report.

U.S. News & World Report each year rates business programs accredited by the Association to Advance Collegiate Schools of Business, compiling its list based on surveys of business school deans and senior faculty. The undergraduate program at UNLV’s Lee Business School was ranked 156th in the publication’s 2016 list along with 34 others, including Utah State University, Logan. The new rating brings UNLV up 28 notches from its 2015 spot at 184.

“It’s a significant move up, and I think it’s a reflection of the hard work of our faculty and staff and our students who compete in regional and national competitions,” business school Dean Brent Hathaway said. “It’ll probably increase demand for our program for students and also impact the quality of faculty that we can attract.”

UNLV also moved up among schools ranked for their high ethnic diversity, tying for second place in the 2016 rankings with three other schools deemed the nation’s most diverse. It had tied for sixth in 2015 and has now been ranked among the country’s top 10 for the fifth consecutive year.

The university also advanced one spot among schools where students have accumulated the least debt upon graduation, ranking 13th for 2016.

While the favorable ratings are welcome news for the university, such rankings are often criticized by scholars who warn that their supporting methodology is arbitrary and oversimplifies the value of higher education.

“Because the rankings depend heavily on unaudited, self-reported data, there is no way to ensure either the accuracy of the information or the reliability of the resulting rankings,” Colin Diver, former president of Oregon’s Reed College, wrote in a 2005 Atlantic essay about the U.S. News rankings. “Since much of the information needed to complete the magazine’s ranking algorithm is unpublished, one can only guess how the editors arrive at a value.”