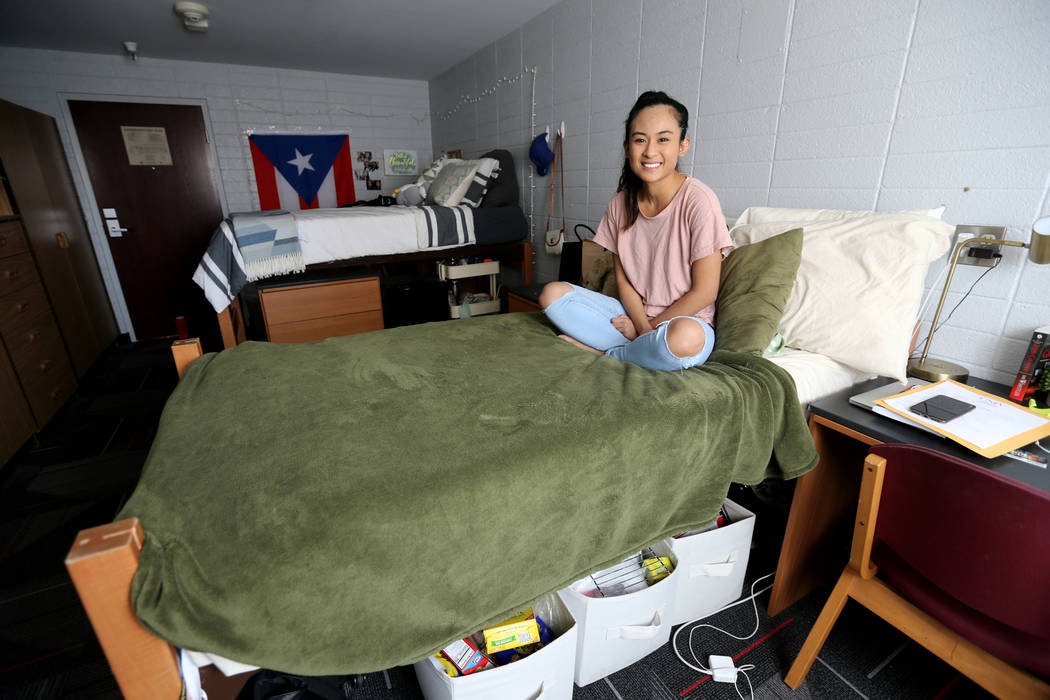 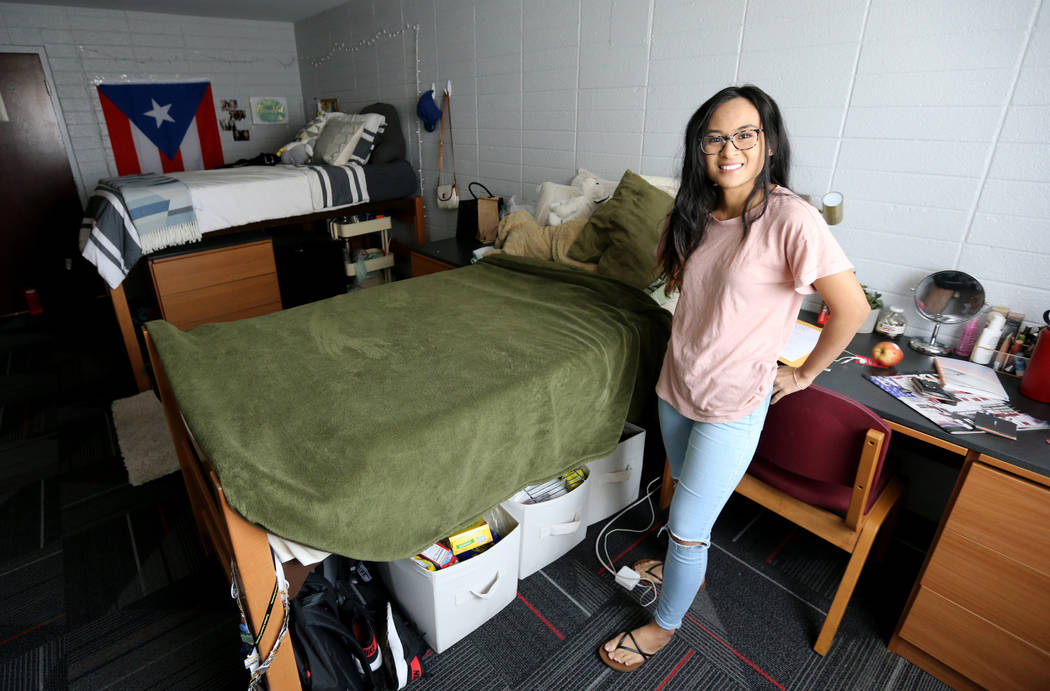 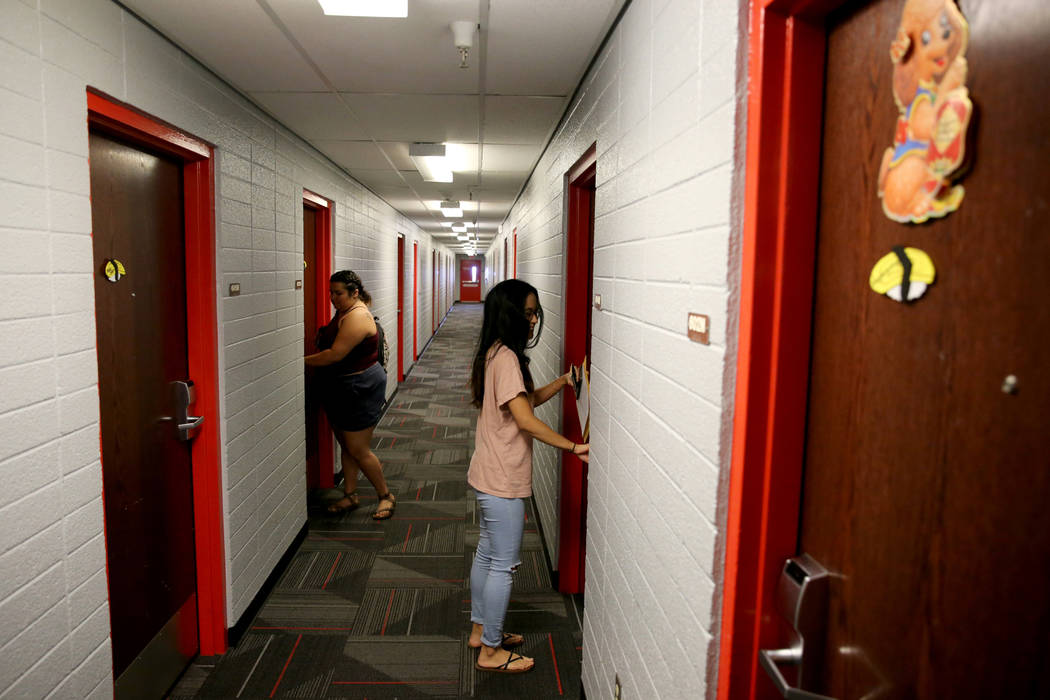 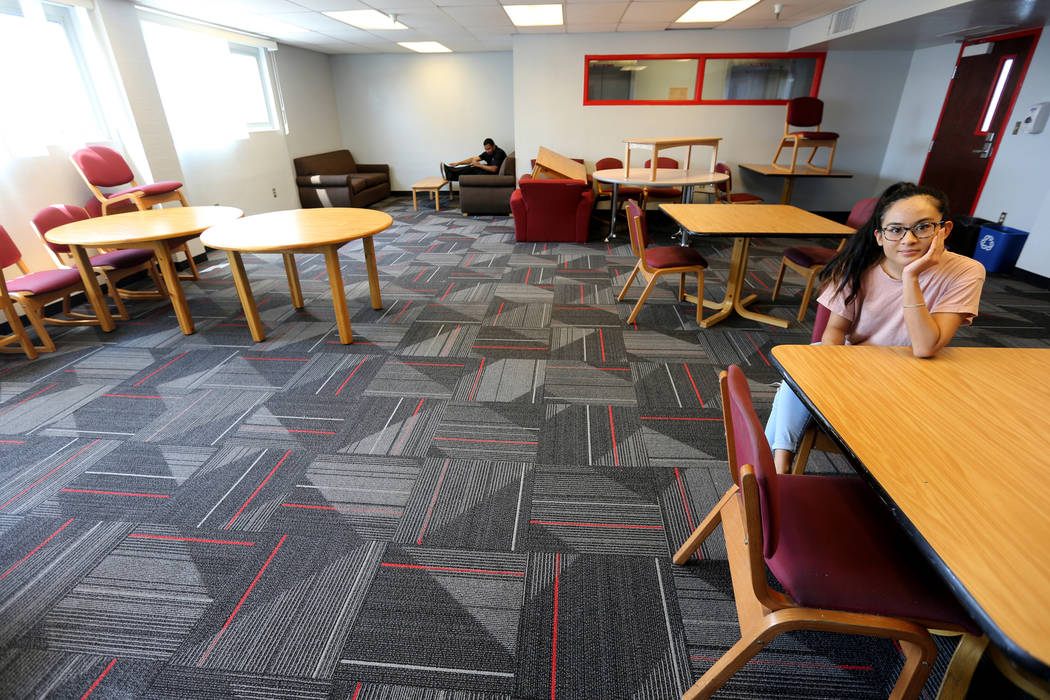 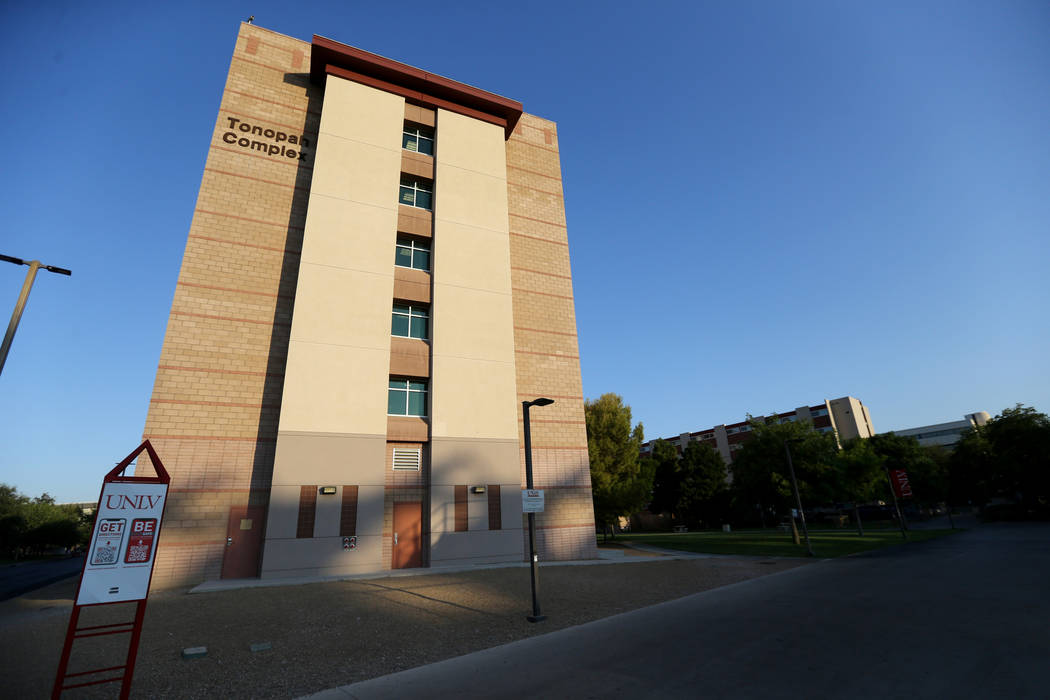 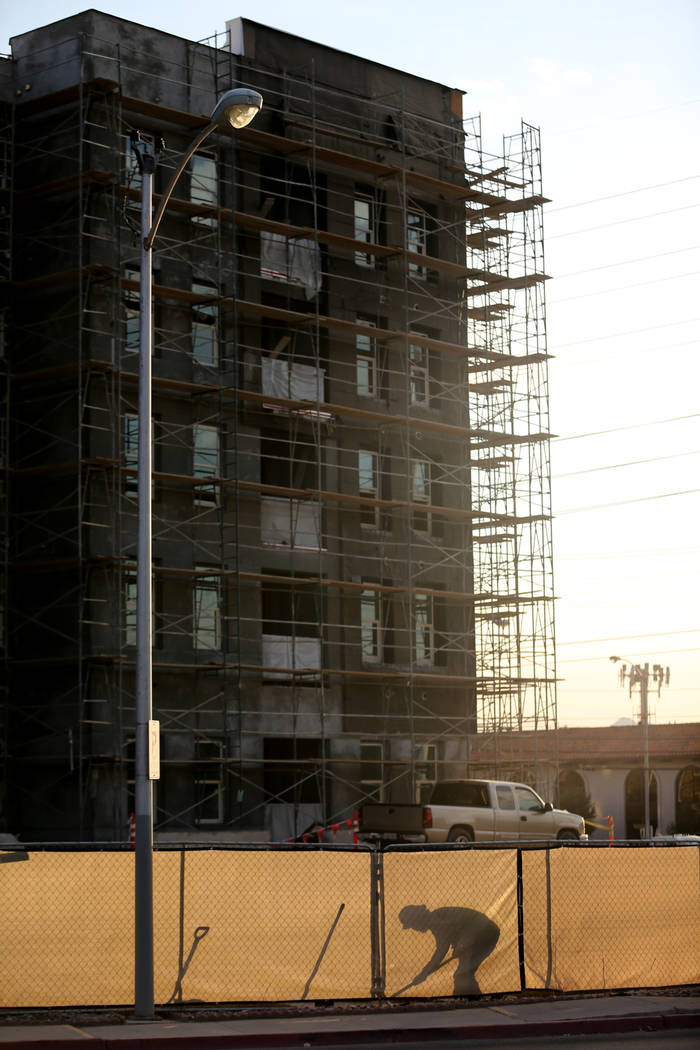 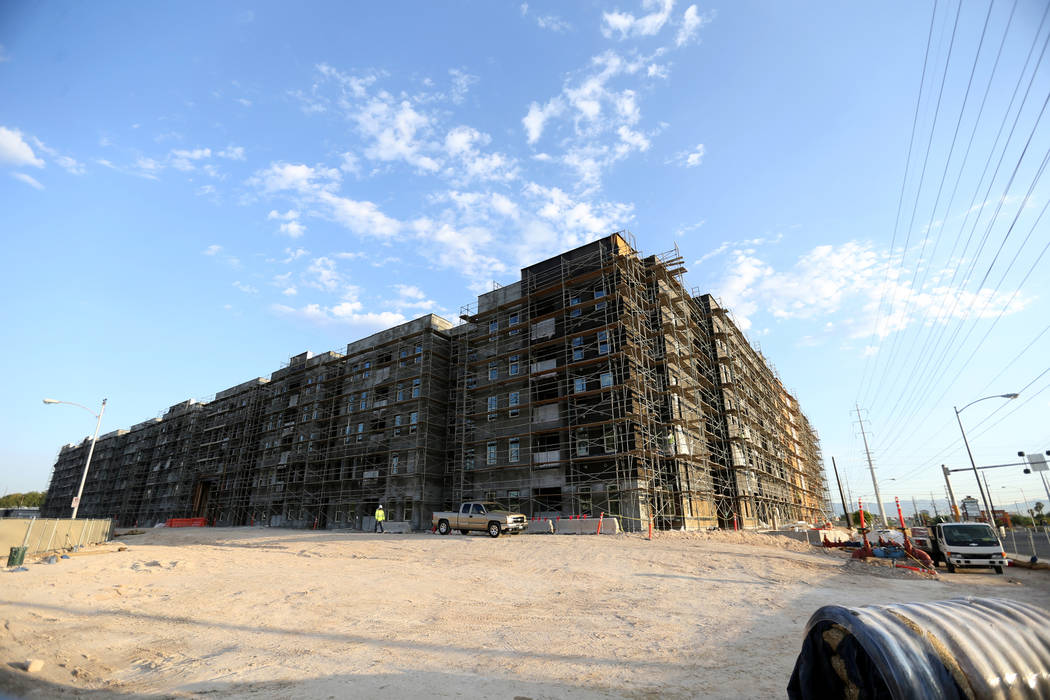 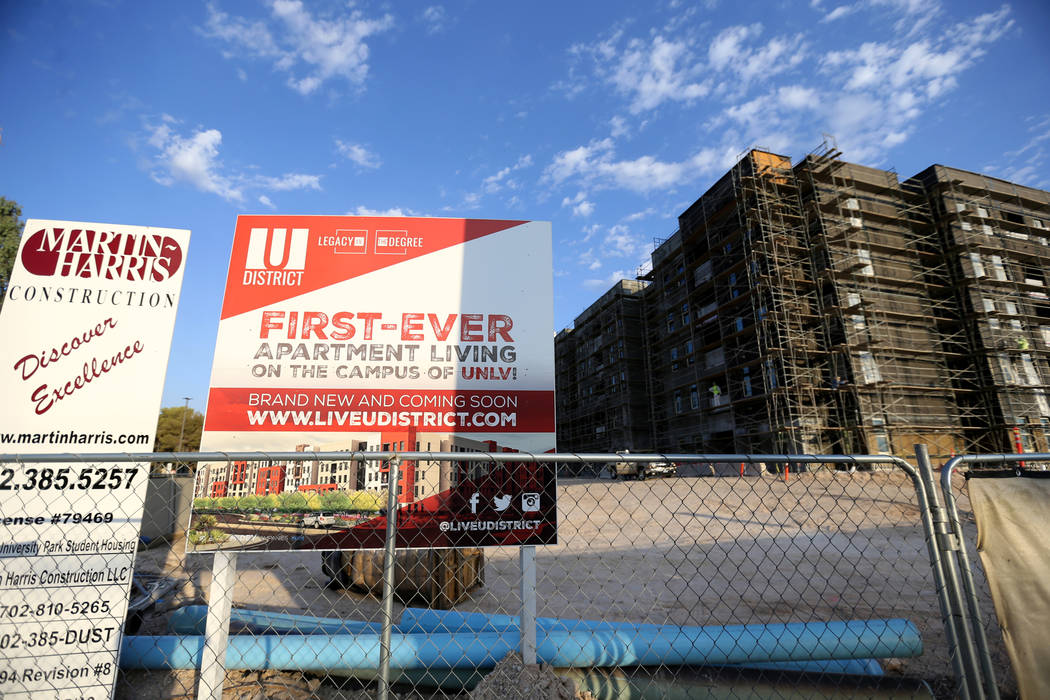 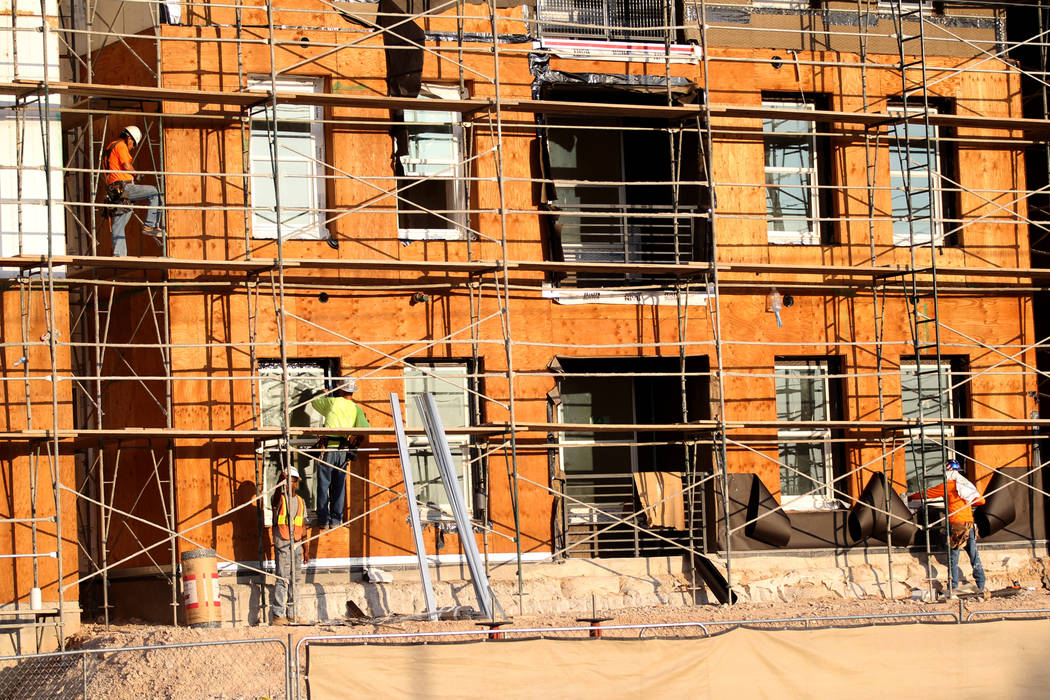 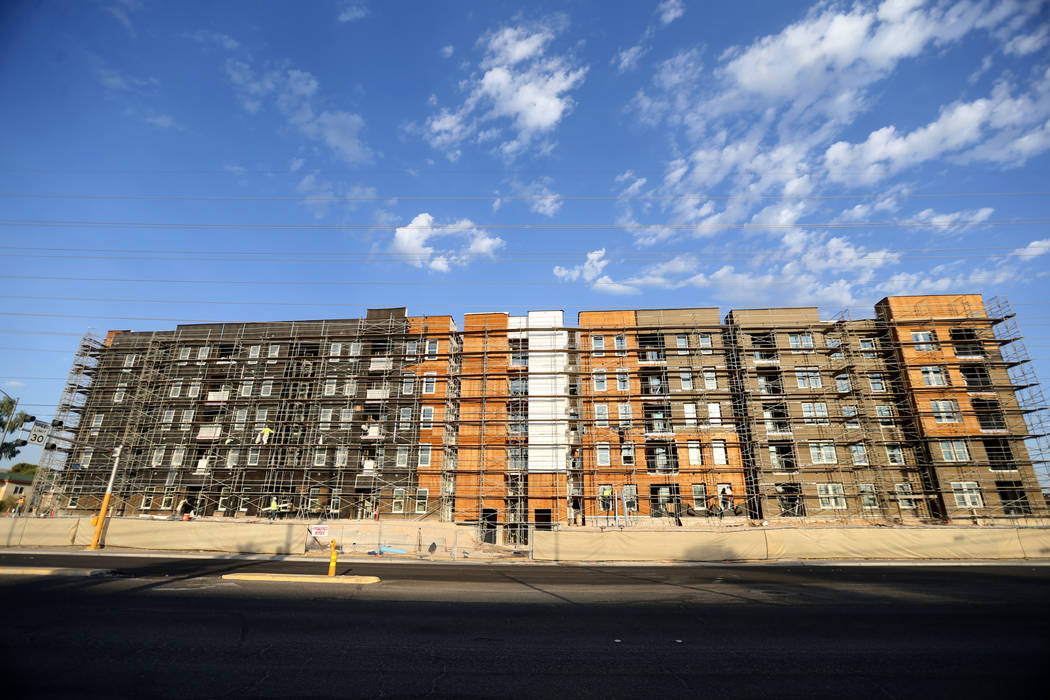 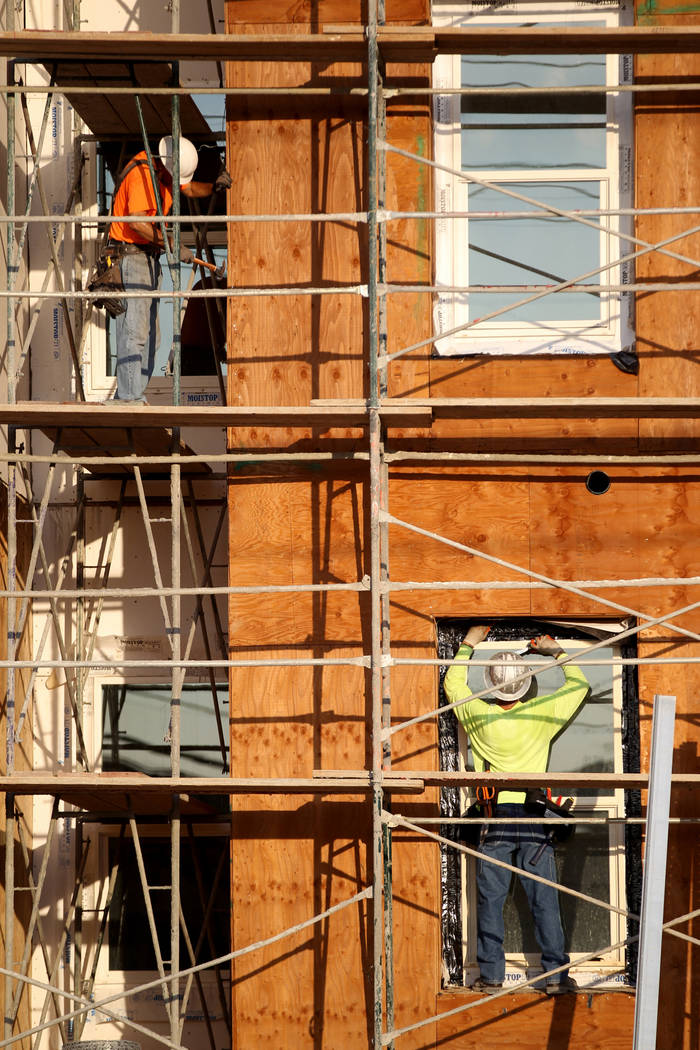 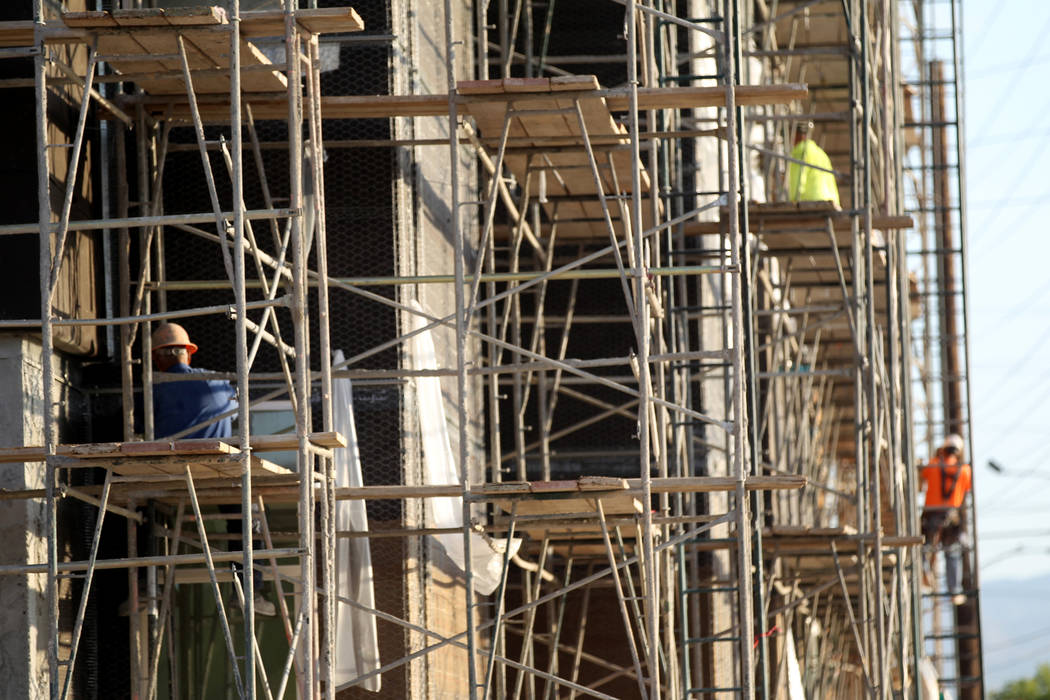 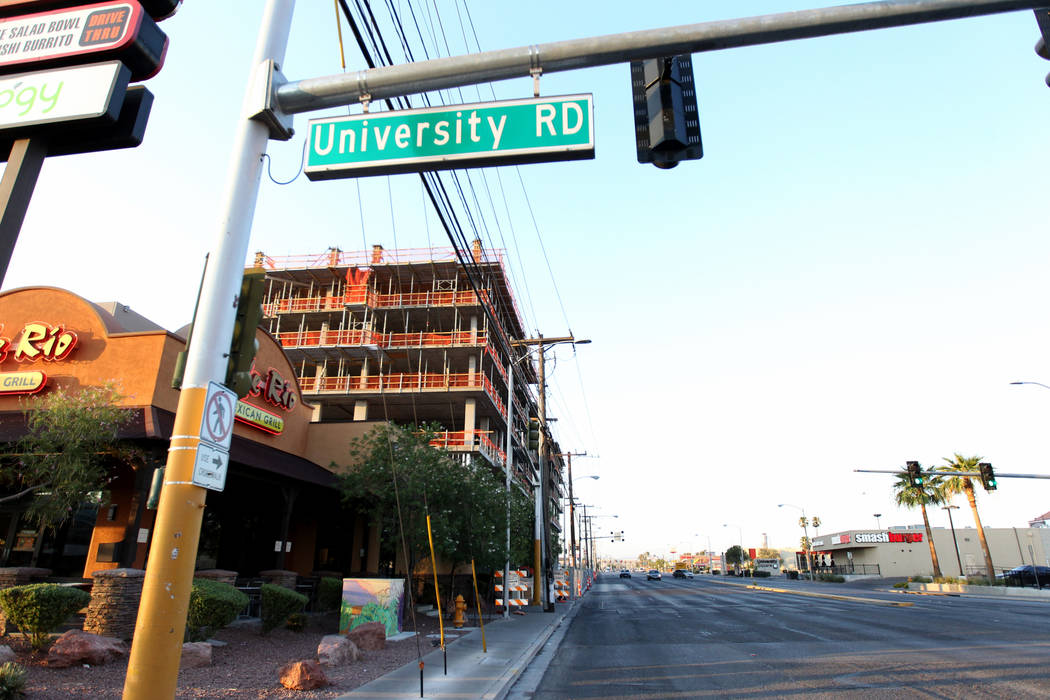 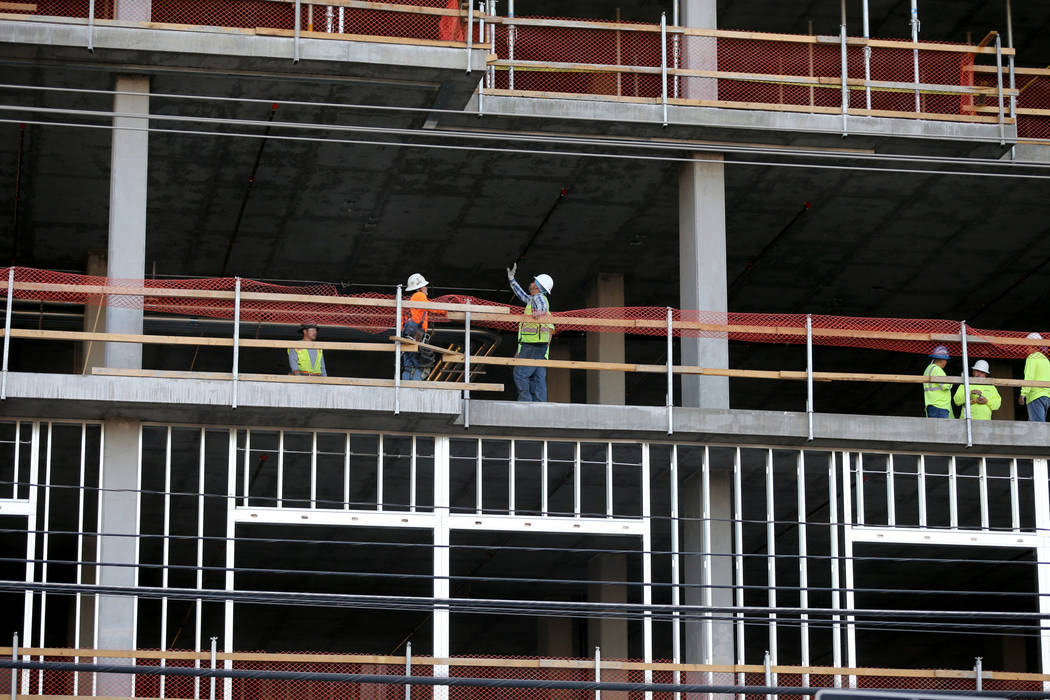 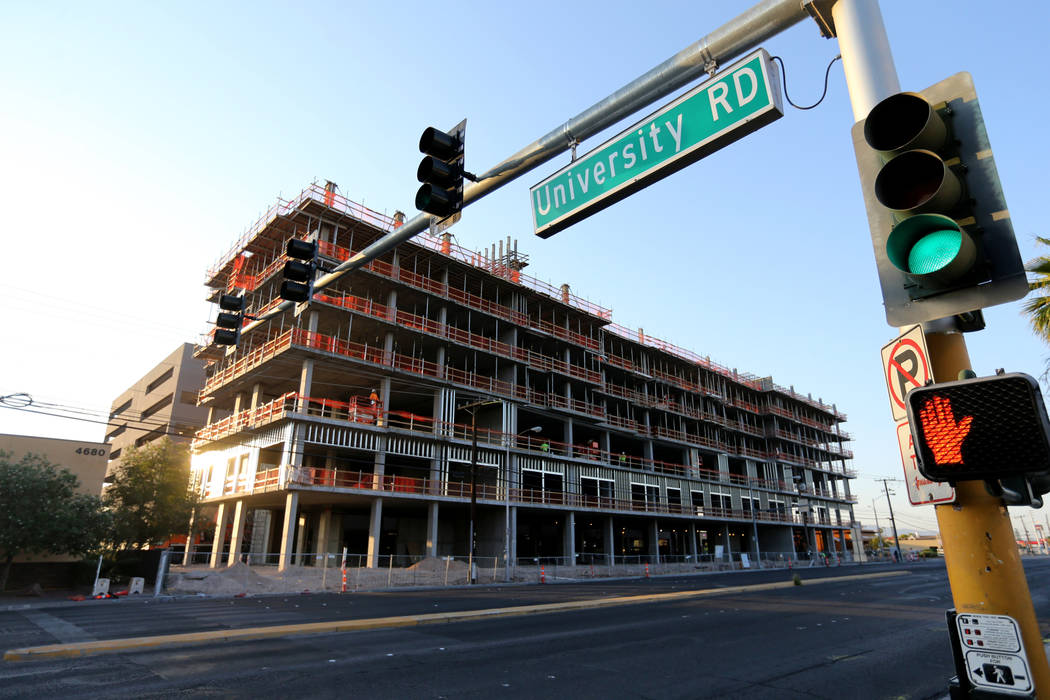 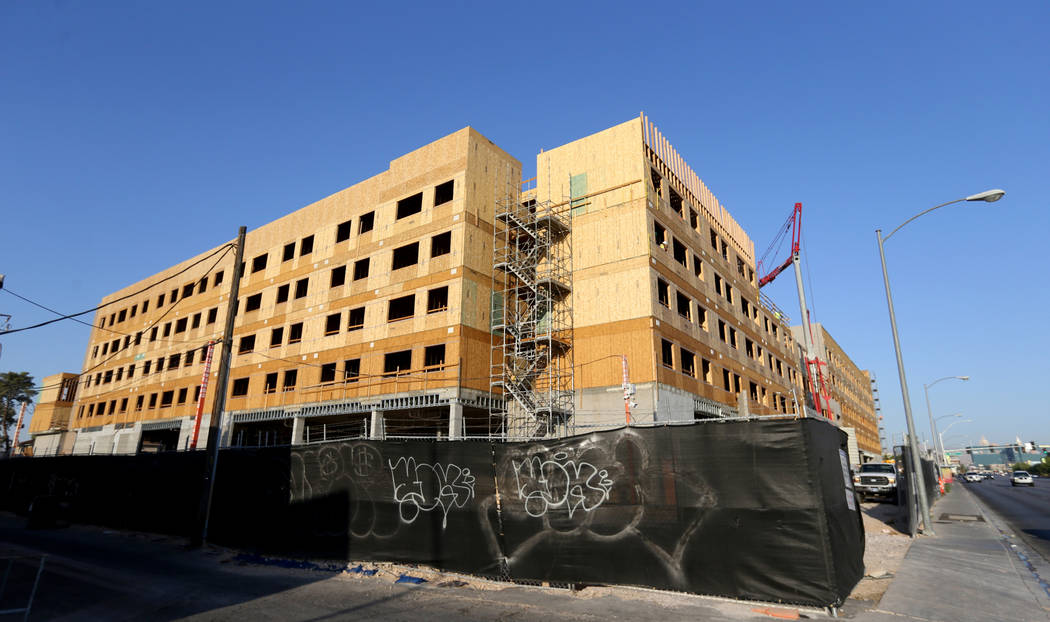 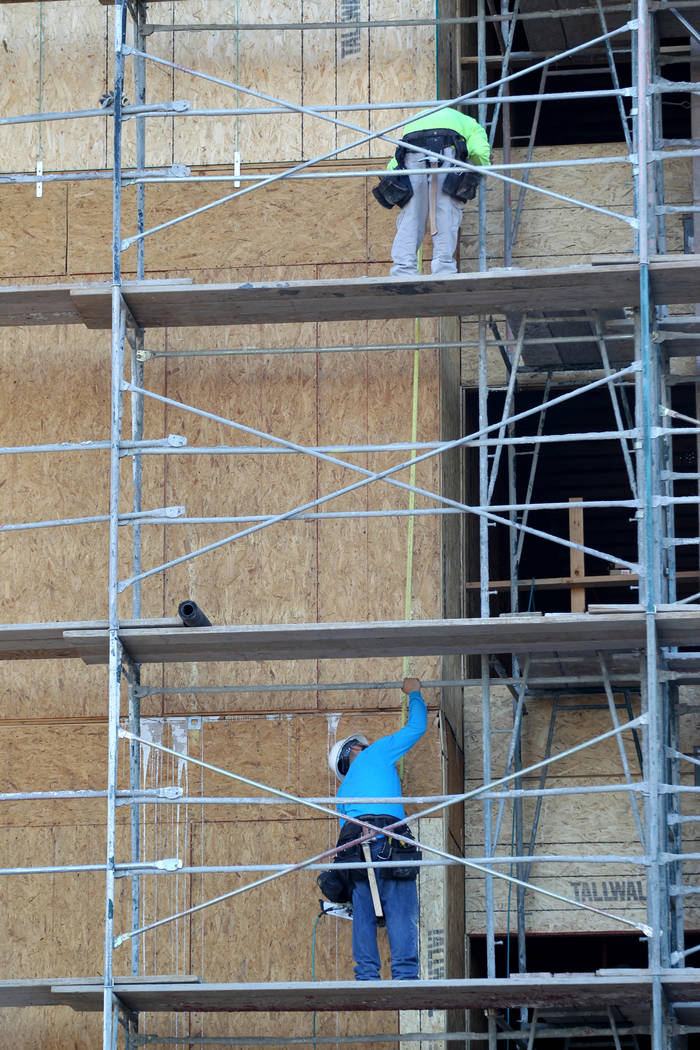 Angelyn Tabalba has a long list of titles after her name.

She’s a radio host who gives listeners lessons about Hawaiian history on her show “The Little Grass Shack.”

She works with the Asian Community Development Council, doing outreach on UNLV’s campus.

She’s an officer for the Residence Hall Association, a rising senior at UNLV studying journalism and criminal justice, and an aspiring graduate student.

All commitments that have been made easier because she has lived on campus.

“I’m been more involved with UNLV because I live there,” Tabalba, 21, said. “For the students that I know who don’t live on campus, they aren’t as informed or as involved as I am.”

UNLV hasn’t been much of a residence community, but the college has long hoped to tear off its commuter-campus label and have a more traditional feel.

Only 6 percent of the university’s full-time student body resides on campus.

UNLV officials, however, envision a time when the university has 35,000 full-time students — with 25 percent of them living on campus.

“When you have a large number of residential students it brings a very strong and vibrant feel to many campuses,” said Richard Clark, assistant vice president for campus life at UNLV. “That’s going to take some time to get there. I’ve been here for 14 years, and we’ve talked about that since I got here in 2004.”

Progress is coming, however.

Legacy LV — a renovation project that upgraded an aging apartment complex for student use — has been converted for this fall, with 360 beds available.

And next July, though the project’s opening date has been delayed by two years, The Degree apartments will bring 760 new beds to campus.

Both projects are part of a larger student housing effort called the “U District,” and represents the university’s second foray into the public-private partnership, or, “P3” model.

P3 allows UNLV to deliver new student housing units, but doesn’t require the university to build, finance or operate them. It’s become a common model across the campus housing landscape, according to James Baumann, spokesman for the Association of College & University Housing Officers. Baumann said the cost of off-campus housing is part of the motivation.

“It’s not that any one of those models is better than the other,” Clark said. “It just depends on what you’re looking for and what your needs are at that time.”

The University of Nevada, Reno also has made a foray into the P3 model with its Ponderosa Village apartment complex — geared toward graduate students — which is co-managed with Balfour Beatty Communities in Philadelphia.

“They have a company rep there, and we have a residential life staff member living there,” said Jerome Maese, director of residential life at UNR. “It truly is a partnership to provide an optimum experience for student living.”

The P3 model is attractive to Nevada State College as well, and officials will bring a 300-bed student housing project to the state Board of Regents for approval in September. The apartment-style complex — with a targeted completion date of 2020 — will be designed, constructed, financed and operated by American Public Development, NSC President Bart Patterson said. The privately funded project will cost an estimated $25 million.

“We’ve had housing on our radar for quite some time,” Patterson said, adding that student demand has accelerated the timeline. The college saw a 70 percent enrollment growth within the first-time, full-time freshman cohort from fall 2016 to fall 2017.

The housing complex is needed for myriad reasons, Patterson said. Among them are alleviating the travel burdens for students who commute from North Las Vegas or Summerlin, offering students the traditional on-campus college experience and expanding enrollment to students who live all over Nevada.

Regents in December expressed frustration that the opening date of The Degree apartments has continually been delayed. At the time of the first delay, about 400 students had signed leases to move in.

And both projects are needed, as UNLV’s four on-campus complexes have been at capacity for a few years. In addition, about 100 students are usually placed on a waiting list each summer. By the start of the semester, about a dozen students are left on the list and temporarily accommodated by a hotel as university officials work through their no-show list.

“Within the last five years there’s been a little more vocal demand,” said Regent Mark Doubrava. “Before that, if you go back 20 years, there wasn’t a lot of demand.”

Doubrava hypothesizes that the rapid growth of the Las Vegas Valley — the population of Clark County has grown every year since 2010 — has something to do with the need for additional housing.

“The greater distances students have to travel has made it better and more advantageous to get something on campus,” he said.

UNR also shares UNLV’s goal of having 25 percent of the full-time student population live on campus.

But the state’s northern university is a little closer to hitting that number. About 18 percent of its full-time, undergraduate student population lived on campus in 2017, and that percentage will grow over the next couple of years.

The university is not only opening a new housing complex on Aug. 16 — Great Basin Hall — but officials also have seen a 50 percent increase in applications for return residence hall students because of the skyrocketing home values in Reno.

And even more costs associated with the luxury apartments can come to students when the lease ends, and when management charges for expensive repairs, like carpet replacement.

“Parents are trusting their kids to be good consumers, but as new consumers, they’re still learning, and are easier targets for some of the unethical practices of some of these off-campus places,” Maese said.

The 400 beds opening in the STEM-themed Great Basin Hall, which carries a price tag of $65 million, has given Maese and his staff flexibility to double and triple rooms in Peavine Hall, and Argenta Hall will remain triple rooms.

“We have found the triple rooms are an attractive option for students in both price point and offering,” he said.

And in fall 2019, UNR plans to reopen the 120-year-old Manzanita Hall, after it’s been made earthquake ready. Minor cosmetic changes will be made, too.

“We have plenty of bed spaces to serve our students,” Maese said. “We’re in a good shape right now, for the next couple of years. And then we’ll begin thinking about what is the next project.”

Whatever the plan, the benefits that campus housing provides to students will continue to drive discussions at both universities.

“We want more students to live in university housing because of the resources we provide,” Clark said.

Students who live on campus graduate more quickly and do better academically, Clark said, with 60 percent of residence hall students finishing this past spring semester with a 3.0 or better.

The mid-semester grade checkup is one resource that’s helpful to students, and they have easier access to tutoring and other resources just by living on campus.

“In the halls during study week, we have 24 quiet hours,” Tabalba said. “It’s a time where everyone needs to be mindful of everyone’s studying. Even though you’re studying by yourself, you know you’re not in it alone because everyone is on the same path as you.”

Tabalba, who’s from Honolulu, was required to live on campus during her freshman year because she’s an out-of-state student. But she’s also need-based, and has considered moving off campus because room and board, which amounts to about $11,000 annually, can be hard to manage. In the end, she’s stayed with on-campus living because of the convenience.

“I’m a four-minute walking distance from my classes,” Tabalba said. “In the event that I wake up late, it’s easy for me to get up and walk to class. The biggest highlight is being able to be where all your resources are. If you need to see you professor, or your adviser, they’re right where you live, and if I forget a book or a paper, I wouldn’t have to travel back home for anything.”