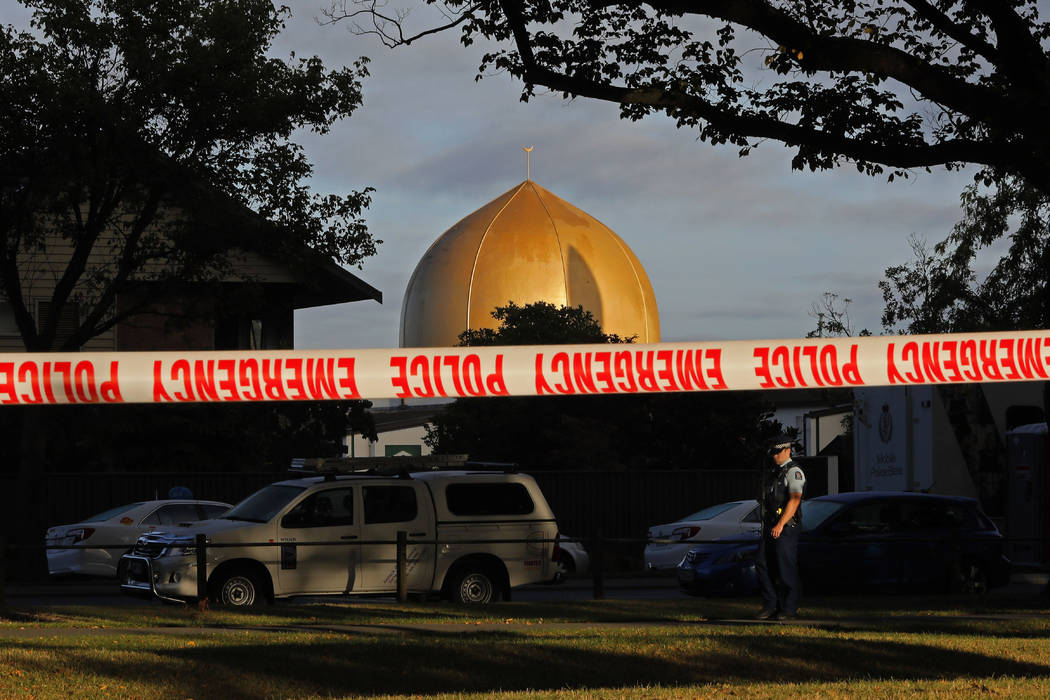 A police officer stands guard in front of the Masjid Al Noor mosque in Christchurch, New Zealand, Sunday, March 17, 2019, where one of two mass shootings occurred. New Zealand's stricken residents reached out to Muslims in their neighborhoods and around the country on Saturday, to show kindness to a community in pain as a 28-year-old white supremacist stood silently before a judge, accused in mass shootings at two mosques that left dozens of people dead. (AP Photo/Vincent Yu)

In his office at UNLV, sociology professor Simon Gottschalk tapped his keyboard.

With that single movement, Gottschalk said, an internet user can perform many actions, including playing a video game, hitting “reply all” to an email or posting a comment on a hate website.

Gottschalk has spent the past two years studying how message boards on white supremacist websites can radicalize users, turning some to real-life violence such as the attacks on a Pittsburgh synagogue and Christchurch, New Zealand, mosques.

Though radicalization can happen offline, the internet acts as a catalyst, Gottschalk said. It removes the constraints of time and space, as well as the context of the real world and criticism from those with opposing views.

“It can diminish an individual’s capacity to realize what they’re even doing,” Gottschalk said.

Gottschalk and a team of student assistants spent two years analyzing thousands of threads on websites that had been labeled as promoting white supremacy by the FBI or by academics.

Finding no computer program could do the kind of analysis he wanted, Gottschalk and his team instead printed out copies of 4,400 conversation threads and labeled them according to the emotion they expressed — anger, fear or happiness — as well as the targets of those emotions.

The research identified a chain of events that takes place during a person’s radicalization, including two points where real-life violence is most likely.

It starts with a person who harbors prejudice finding a space online to not only express their opinions, but receive praise and validation for doing so, Gottschalk said.

Through interactions with other members, that person is then convinced that the difficulties in their life are the fault of a group of others, which promotes anger, the first junction that can lead to violence.

Finally, the person comes to believe that the group of others presents a real threat, whether to their physical person or their country or other social group, leading to fear. A perceived physical threat is most likely to stir a violent response, Gottschalk said.

“If you believe others are threatening you, it becomes easier to justify physical violence,” Gottschalk said.

The research also found that the vast majority of visitors to extremist websites will not convert their online words to real-life violence, Gottschalk said. Some even turn back — though Gottschalk says that it’s difficult to profile those who do given the anonymity of such websites.

“These websites are offering something they’re missing, whether it’s pride or solidarity, but it comes at a price, and that’s buying into the ideology,” Gottschalk said. “They may get it from somewhere else.”

But a solution is needed to stop the few who do go on to violence, Gottschalk said, even if it’s shutting down the sites completely.

Though the move can seem unappealing to advocates of free speech, Gottschalk said that other democracies such as France, Germany, Italy and New Zealand have found ways to remove the websites or reduce their reach while still protecting free speech rights.

“It’s one solution, but it can’t be the only one,” he said. “We need to find other ways to reduce all this hatred.”