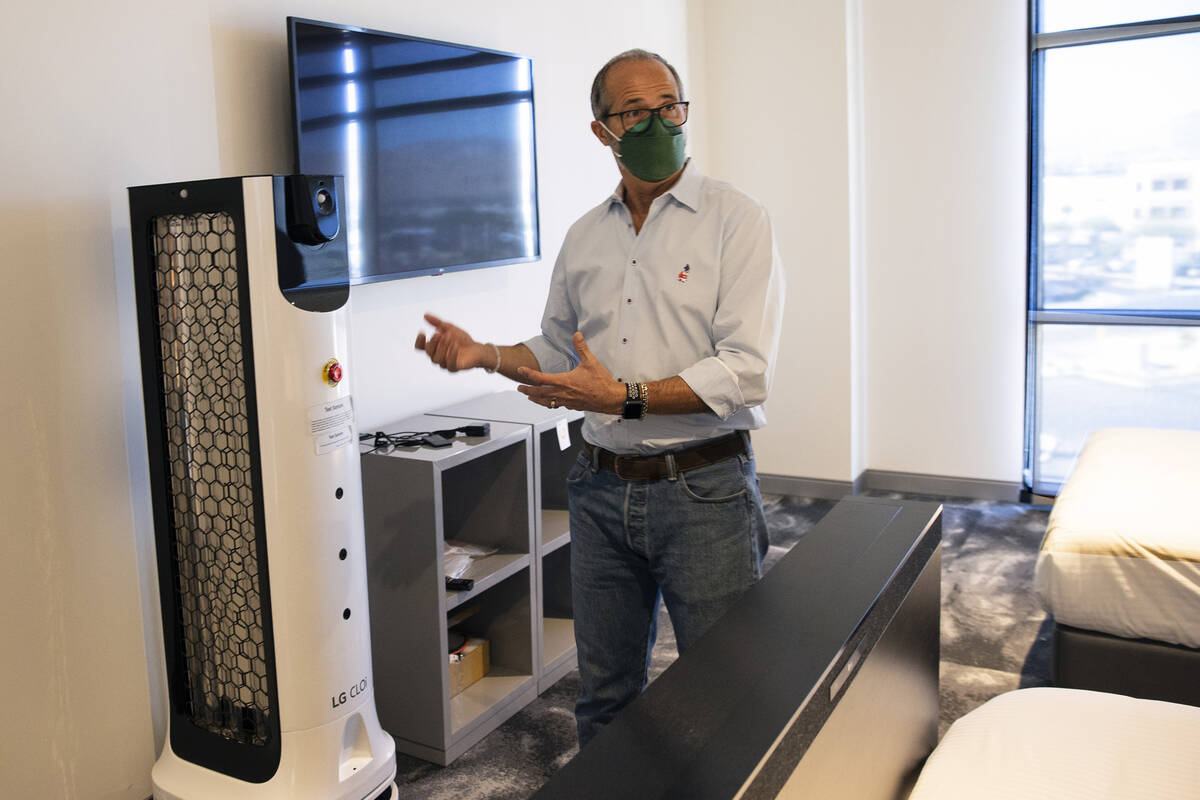 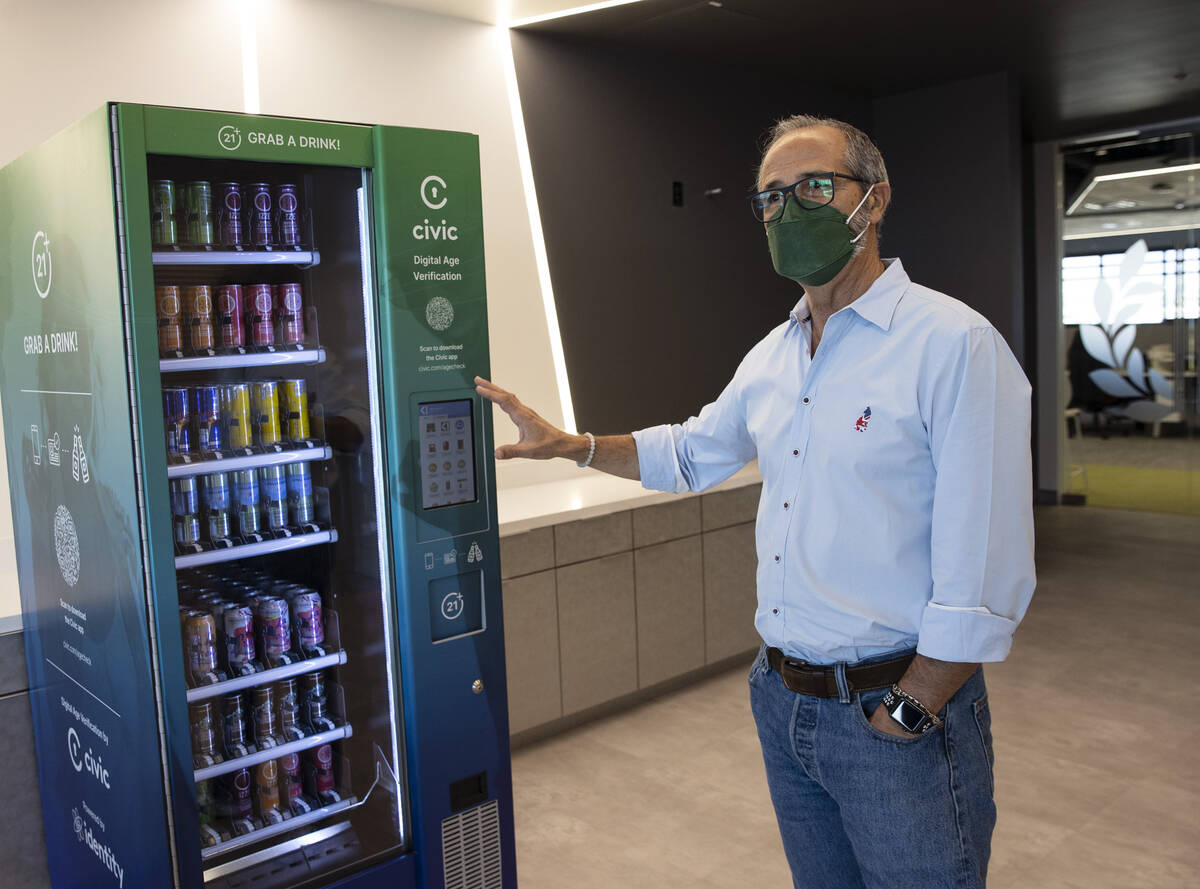 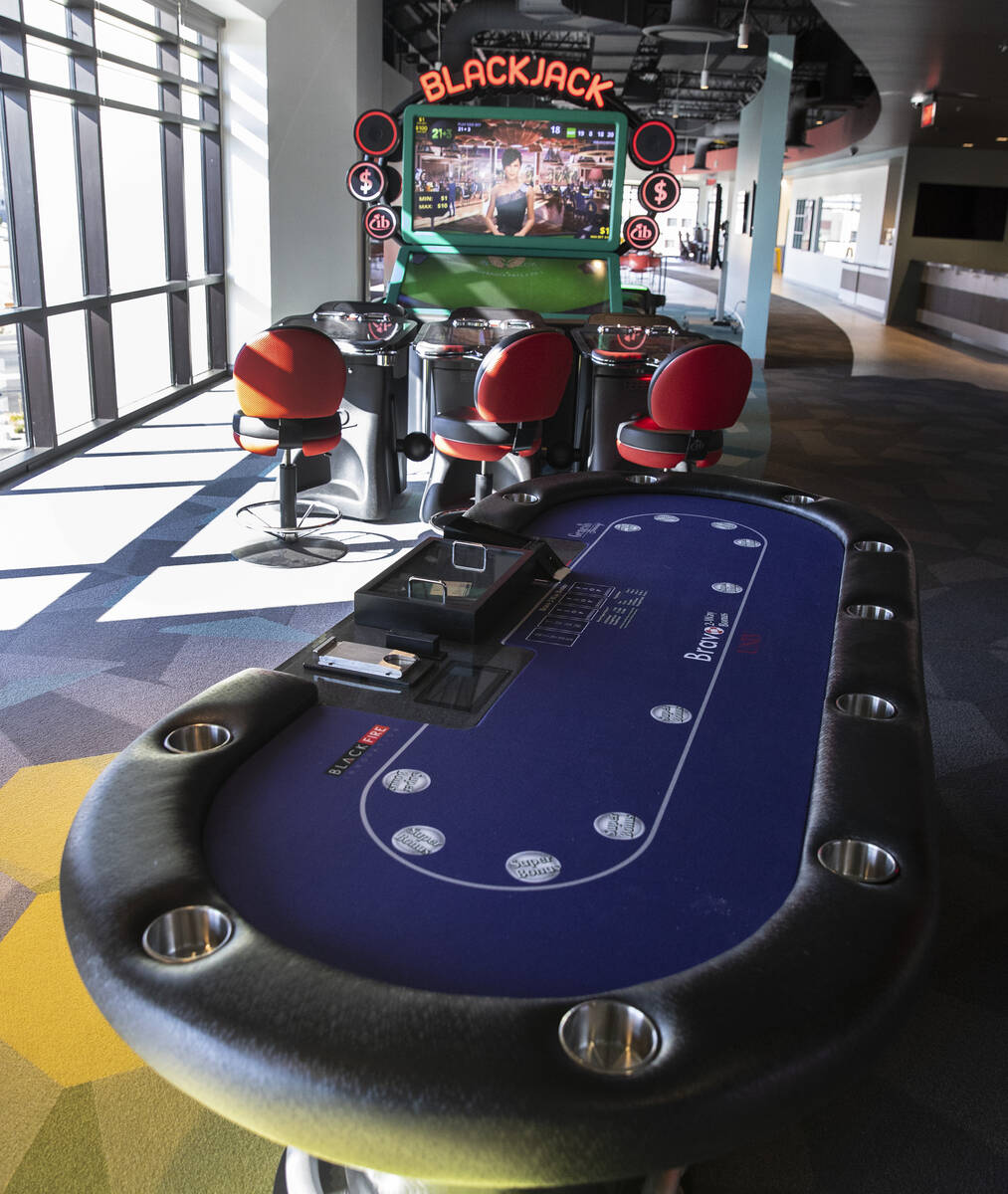 A gaming table and a video blackjack machine are displayed at the Black Fire Innovation center on Tuesday, Sep. 14, 2021, in Las Vegas. The Black Fire Innovation Hub is a living lab area where students are able to test out new innovations in a mock resort and casino settings.(Bizuayehu Tesfaye/Las Vegas Review-Journal) @bizutesfaye 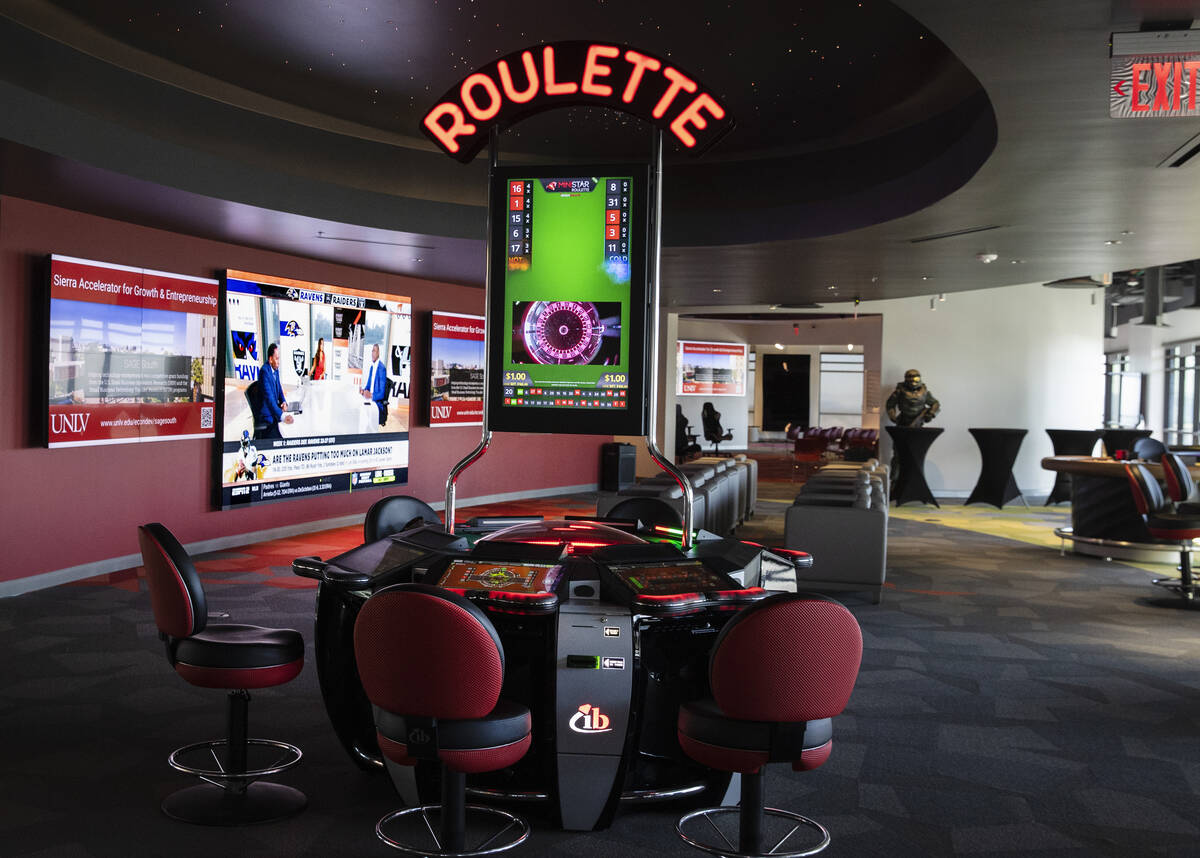 A video roulette machine and a sportsbook area are shown at the Black Fire Innovation center on Tuesday, Sep. 14, 2021, in Las Vegas. The Black Fire Innovation Hub is a living lab area where students are able to test out new innovations in a mock resort and casino settings.(Bizuayehu Tesfaye/Las Vegas Review-Journal) @bizutesfaye 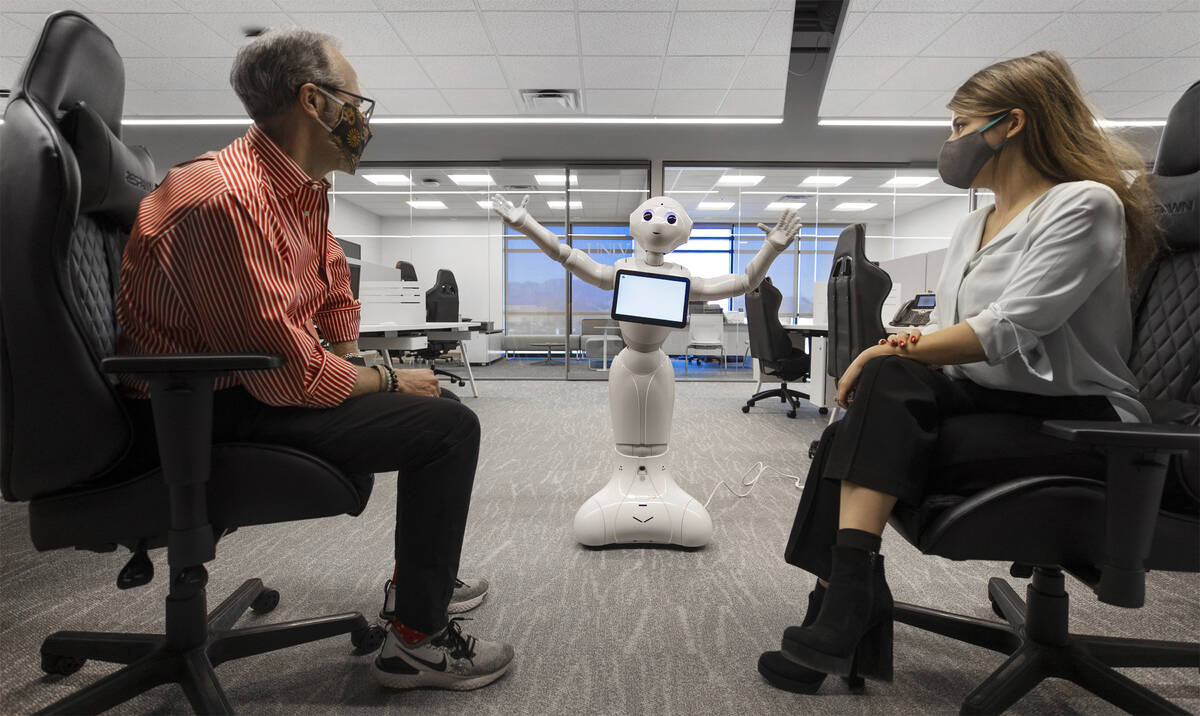 An idea to help transform UNLV into a hotbed for hospitality innovation started cooking over a pizza between friends.

Caesars Entertainment was looking for a research and development lab, a place where the iconic gaming company could test slot machines and other new gambling and hospitality technologies before rolling them out in their resorts. The topic that came up over lunch between Robert Rippee, who was teaching at UNLV’s Hospitality Innovation Lab, and friend and then-Caesars Chief Information Officer Les Ottolenghi.

It’s a conversation Rippee remembers vividly, down to the pizza toppings: sundried tomatoes, ricotta cheese and pepperoni on thin crust.

“(Caesars) saw too often that the industry is too reliant on vendors to bring them new technology, and they weren’t able to test it in real environments,” Rippee said.

Rippee brought the idea to Zach Miles, who was at the time UNLV’s vice president of economic development. Miles was looking to build the first building at 122-acre Harry Reid Research and Technology Park in the southwest Las Vegas Valley, some 10 miles from UNLV’s main campus.

“I made the introduction, and here we are, sitting in the building,” said Rippee, who now serves as the executive director of Black Fire Innovation Hub, the result of the collaboration between UNLV and Caesars.

Black Fire Innovation Hub represents UNLV’s first foray into the world of business accelerators where ideas can take shape and startups flourish, said Bo Bernhard, who took over as UNLV’s vice president of economic development this year after Miles left for a job at Oklahoma State.

The building opened its doors in January 2020 with a simple goal: bringing the university and local business community together to test and develop ideas and products in the gaming and hospitality spaces.

The focus on innovation is evident at every turn inside the 43,000-square-foot space. There’s the mock resort, complete with a casino floor and sportsbook, hotel rooms where the latest in UV-sanitizing robots and connected technologies are being tested, and a kitchen and dining area. There’s even “Gita,” a small cobot — a collaborative robot — on wheels that can follow a stadium beer vendor around while carrying the beer, saving them from having to carry it on their back or shoulder.

The space goes beyond gambling and hospitality, though. It’s a place where all kinds of technology can be tested, from augmented reality to smart toilets to even the latest trends in competitive gaming at Black Fire’s esports arena.

It’s not hard to see why 80 companies now have a space or plan to have a space at Black Fire, including tech giants like Intel, Panasonic and LG. Those 80 companies have a combined value of more than $1.134 trillion, according to Bernhard, ranging from Fortune 500 companies down to small businesses with just two employees.

“It’s a perfect example of where industry, where public and private can come together in a really great way to support each other,” said Caesars Entertainment Chief Administrative and Accounting Officer Stephanie Lepori, who oversees Black Fire for the company.

Caesars’ main investment in the space has been financial, Lepori said. But it also got the research and development lab that had initially helped spark the conversation.

Being able to test them out is incredibly important in the gaming world, Lepori said, given how tightly regulated slot machines are in Nevada.

“It’s really an opportunity to test all of those features in non-live environments to make sure it’s working as you expected,” Lepori said.

A different type of classroom

At Black Fire, students break away from the traditional university format where a professor reads off their yellowed notes that they’ve used for a decade or more in favor of more active engagement, Bernhard said.

“Instead of being passively lectured to, what if your assignment was to invent an answer?” he said.

It’s a model that Rippee’s students have quickly come to love.

“The feedback from the participants in my programs, they absolutely love it. They can’t believe we have these facilities. The first time they walk in they have this look of ‘We’re really going to have this?’” Rippee said. “It’s so well-suited for what we’re doing. It’s the perfect spot for collaborative, active learning.”

Black Fire is the first and the flagship building at the Harry Reid Technology Park, but it will soon have company.

A second building is currently under construction at the park, one that will closely mirror the setup of Black Fire, Bernhard said. The university already has commitments from “two major tech companies” who plan to open an office at the building, Bernhard said, although he can’t say who they are just yet.

A third building is being built by tech giant T-Mobile, and the fourth planned building for the tech park will be focused on medical technologies.