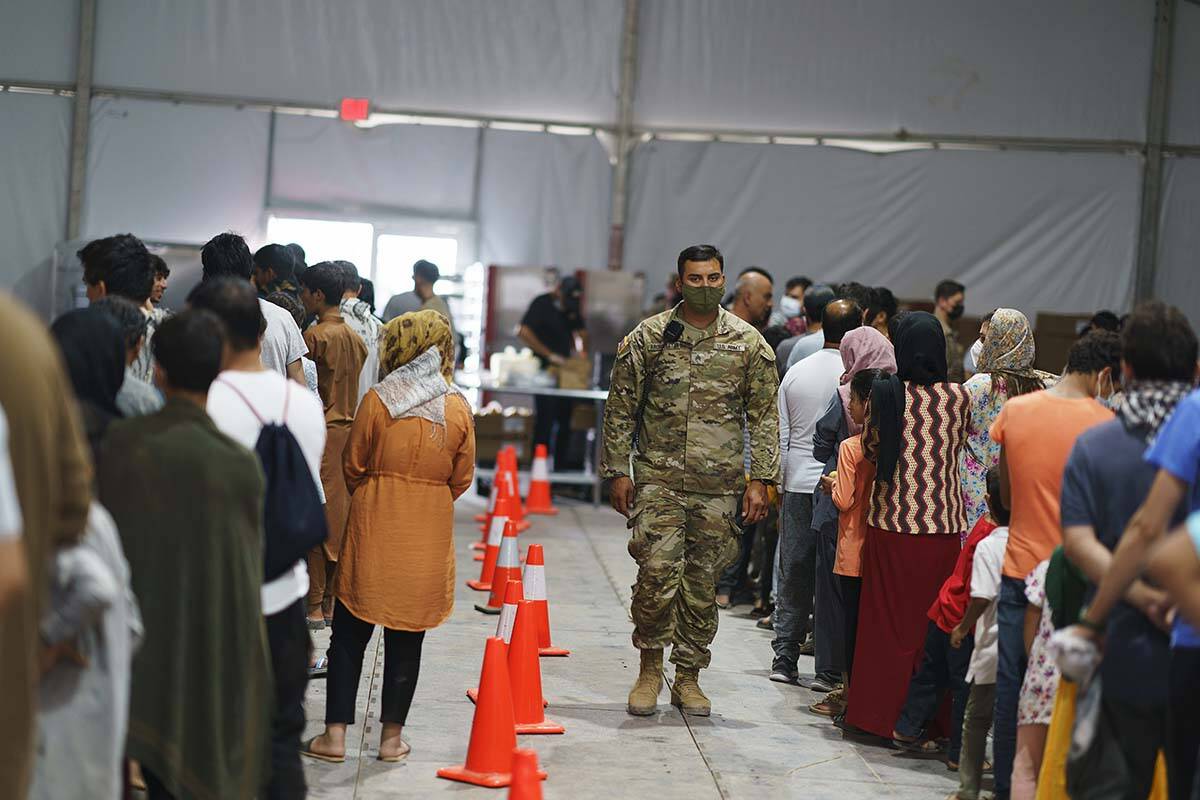 Afghan refugees line up for food in a dining hall at Fort Bliss' Doña Ana Village where they are being housed in Chaparral, N.M., Friday, Sept. 10, 2021. (AP Photo/David Goldman)

The Centers for Disease Control and Prevention this week asked health care providers to be on alert for cases of measles and other infectious diseases in evacuees from Afghanistan.

Clinicians have been asked to notify their local health district or state health department if they suspect a case of measles. The most recent case in Clark County was reported in 2018, said Stephanie Bethel with the Southern Nevada Health District.

The health district for Clark County notified local doctors of the CDC’s guidance through its email notification system earlier this week.

“We are educating our physicians about the very small but potential risk of measles or perhaps other infectious diseases that might be occurring in people who arrive from Afghanistan,” said Dr. Cortland Lohff, chief medical officer for the health district.

The CDC said this week it is requiring that evacuees from Afghanistan who have arrived in the United States get vaccinated against measles and quarantine for 21 days on military bases and other safe havens, after some were found to have the highly contagious virus. Some evacuees already had resettled before measles cases had been identified and the vaccination campaign had begun.

There have been at least 16 cases of measles and four cases of mumps in Afghan nationals and U.S. citizens recently evacuated from Afghanistan to the U.S., the CDC said.

A representative of Catholic Charities of Southern Nevada, an agency assisting with the resettling of evacuees, said that no Afghan evacuees had yet been resettled here.

Nevada is expected to receive 150 evacuees, 50 in Southern Nevada and 100 in Northern Nevada, through the federal Afghan Placement and Assistance program.

Lohff said that the health district would be conducting health screenings and providing any needed vaccinations once the evacuees arrive.

Measles is an extremely contagious infectious disease, infecting nine out of 10 people who are exposed to it through close contact if they don’t have immunity from vaccination or prior infection.

In 2000, measles was declared eliminated from the United States. However, travelers continue to bring measles into the country, where it poses a risk to unvaccinated individuals.

Lohff said that the risk of a measles outbreak in Clark County is low.

“We have fairly good population-level immunity to measles,” through vaccination or, in older individuals, prior infection, he said.

The CDC said there also have been some cases of varicella, mumps, tuberculosis, malaria, leishmaniasis, hepatitis A, and COVID-19 among evacuees.

“Although COVID-19 incidence in this population has been notably low, COVID immunization and testing is being provided for all evacuees,” the agency said.