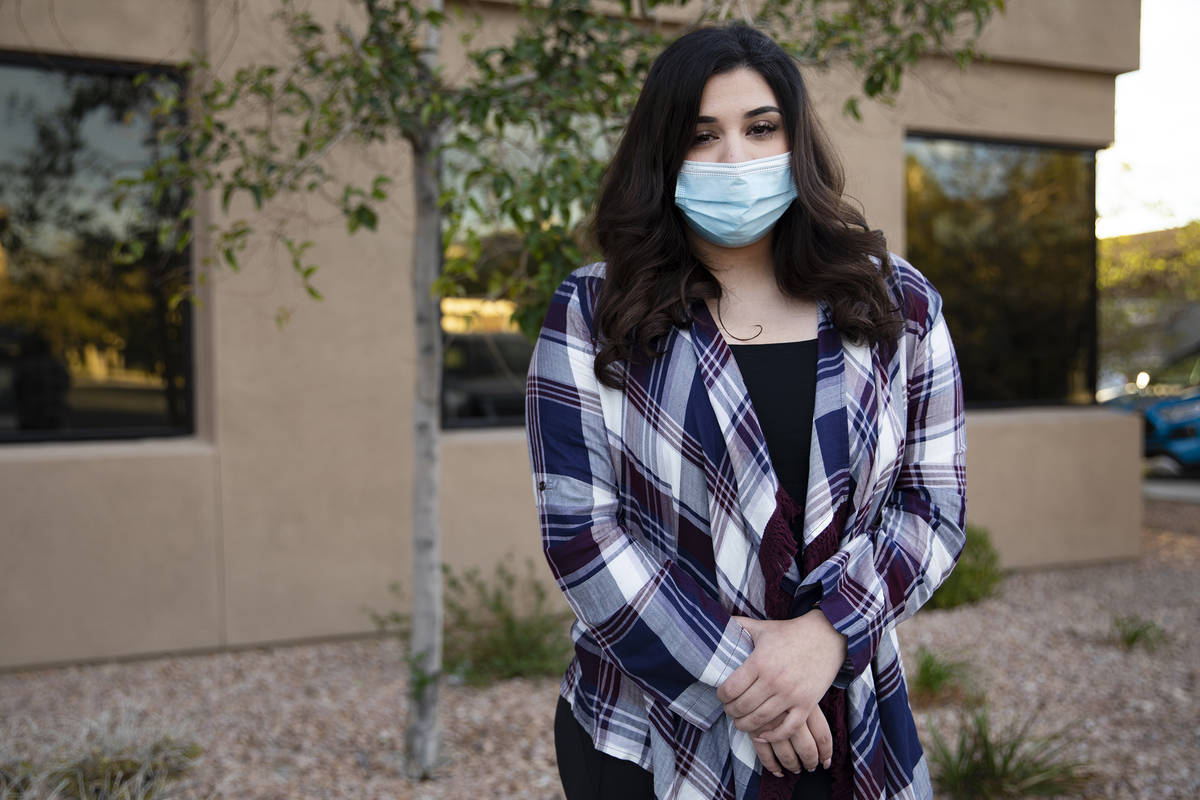 Ashleigh Cope, who contracted a flesh-eating bacterial infection in 2019 after a cosmetic plastic surgery procedure, outside the Battle Born Injury Lawyers offices in Las Vegas on Tuesday, Nov. 17, 2020. Cope and her lawyer have filed a lawsuit against the physician they believe responsible for her infection. (Rachel Aston/Las Vegas Review-Journal) @rookie__rae2 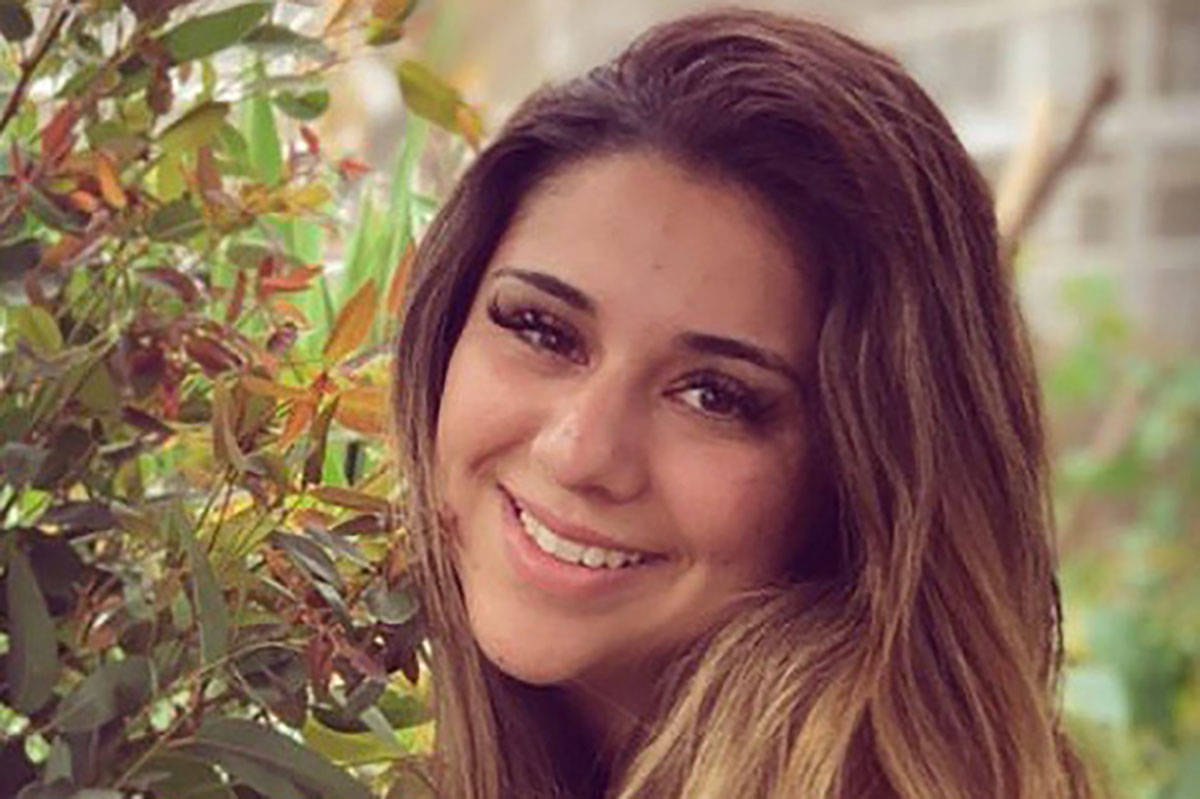 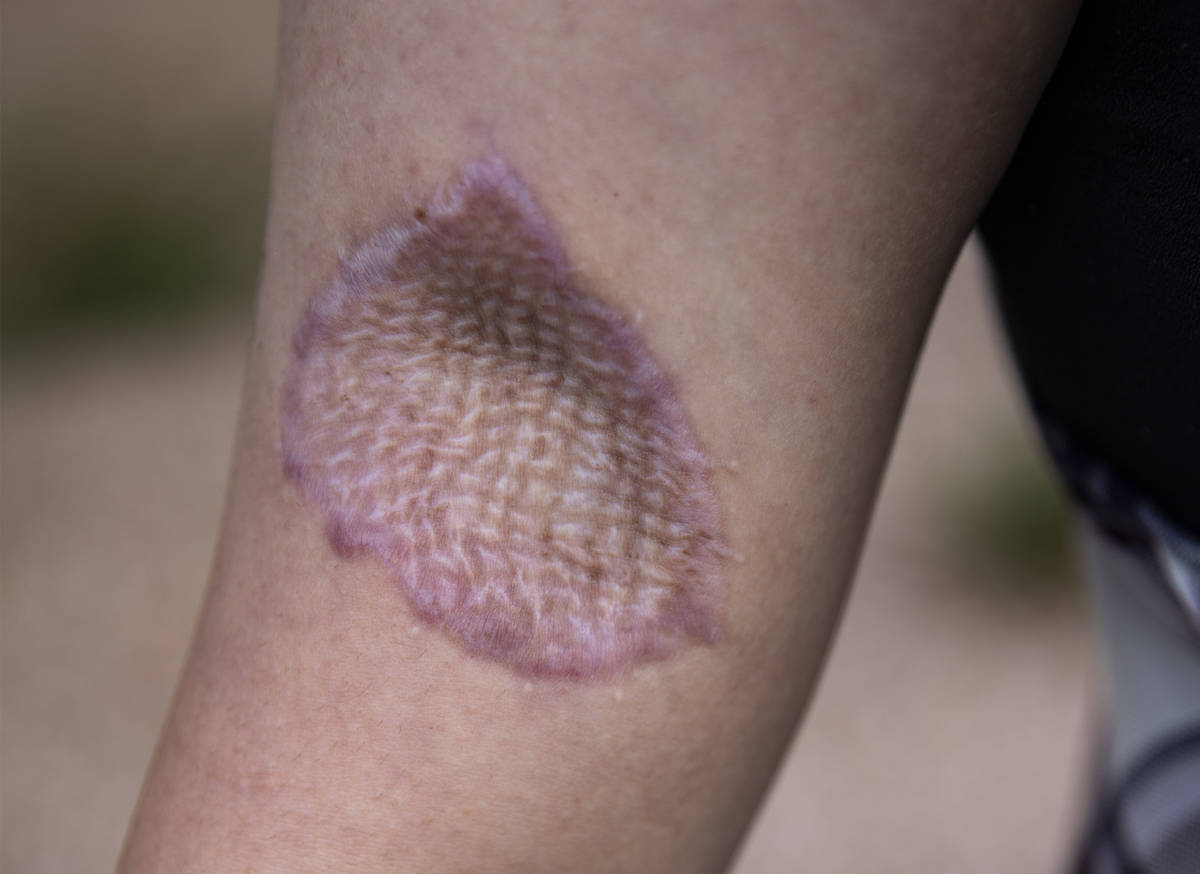 Ashleigh Cope, who contracted a flesh-eating bacterial infection in 2019 after a cosmetic plastic surgery procedure, shows scarring left from her infection on her right arm outside the Battle Born Injury Lawyers offices in Las Vegas on Tuesday, Nov. 17, 2020. Cope and her lawyer have filed a lawsuit against the physician they believe responsible. (Rachel Aston/Las Vegas Review-Journal) @rookie__rae2

A year later, the Henderson woman has sued her surgeon, Valley Health System and others.

Attorney Matthew Hoffmann said his 23-year-old client contracted the infection, known as necrotizing fasciitis, during a liposuction procedure on her back.

Hoffmann said the procedure was done at VIP Plastic Surgery. The infection resulted in 18 surgeries and the loss of skin, tissue and muscle from 40 percent of her body.

Cope spent months at University Medical Center — which was not involved in her original treatment — until her release in the spring. Cope was released early from the hospital because of the COVID-19 pandemic.

“Ashleigh is at home. She is stable,” Hoffmann said Tuesday. “She is doing physical therapy. She is working with a reconstructive surgeon who is with the UNLV School of Medicine. Now she is doing well, all things considered, but she has quite a road ahead of her. She will never be anywhere close to what she was.”

Some days are better than others, Cope said in an interview. “Other days I’m in an extreme amount of pain” as the result of nerve damage.

Cope is able to walk but is bothered by a limp and weakness in her foot.

It is difficult, she said, “to go through so much and physically not able to do all the things I want to do because I’m incapable of doing them.”

Before the infection, “I would go to the gym, just train. I was always out doing things with friends. Going out, hanging out, movies, lunch,” she said. “My life was taken from me.”

Necrotizing fasciitis is a rare, fast-moving infection usually caused by a type of streptococcus, the bacteria responsible for strep throat and other ailments. The bacteria typically enter the body through a break in the skin, which could be a surgical incision, a puncture or a minor cut.

Once the infection begins, it typically has to be treated through the removal of tissue to stop it from spreading.

Khorsandi’s attorney, Patricia Daehnke, said he “is an excellent surgeon who cares about all his patients.”

“I have advised him due to HIPAA and patient privacy not to speak about protected medical information of any of his patients,” Daehnke said. “From my information, Dr. Khorsandi met the standard of care and did not cause the alleged harm to this patient.”

HIPAA is an acronym for the federal law restricting release of medical information.

Hoffmann said Cope underwent the liposuction procedure under Khorsandi’s care. After she became ill, she was sent to a free-standing clinic that he identified as ER at Green Valley Ranch.

Hoffmann said Cope’s transfer from the clinic to a full-treatment hospital was delayed by nine hours. Cope, he said, was eventually transferred to the clinic-affiliated Henderson Hospital, several miles away, as opposed to St. Rose Dominican Hospital, Siena campus. The latter had a burn unit and was just a mile away, he said.

Ken Webster, an attorney representing Henderson Hospital and ER at Green Valley Ranch, which are operated by Valley Health System, said, “Due to patient privacy laws and the pending legal action, we cannot provide specific comments on the care and treatment provided.”

“However, when the evidence is presented in this matter, it will demonstrate that Green Valley Ranch Emergency Department and Henderson Hospital provided appropriate care and treatment and took all steps necessary in a timely manner to address the unique medical issues presented in this case,” Webster said.

“She has lost skin and tissue, basically muscle, over approximately 40 percent of her body, to include a large scar on her right bicep, then massive loss all across her back and legs,” Hoffmann said, adding that “people don’t survive statistically that loss of tissue, at least don’t survive without losing limbs.”

Cope said she tries not to think about what happened last Thanksgiving, focusing instead on “just getting better.”