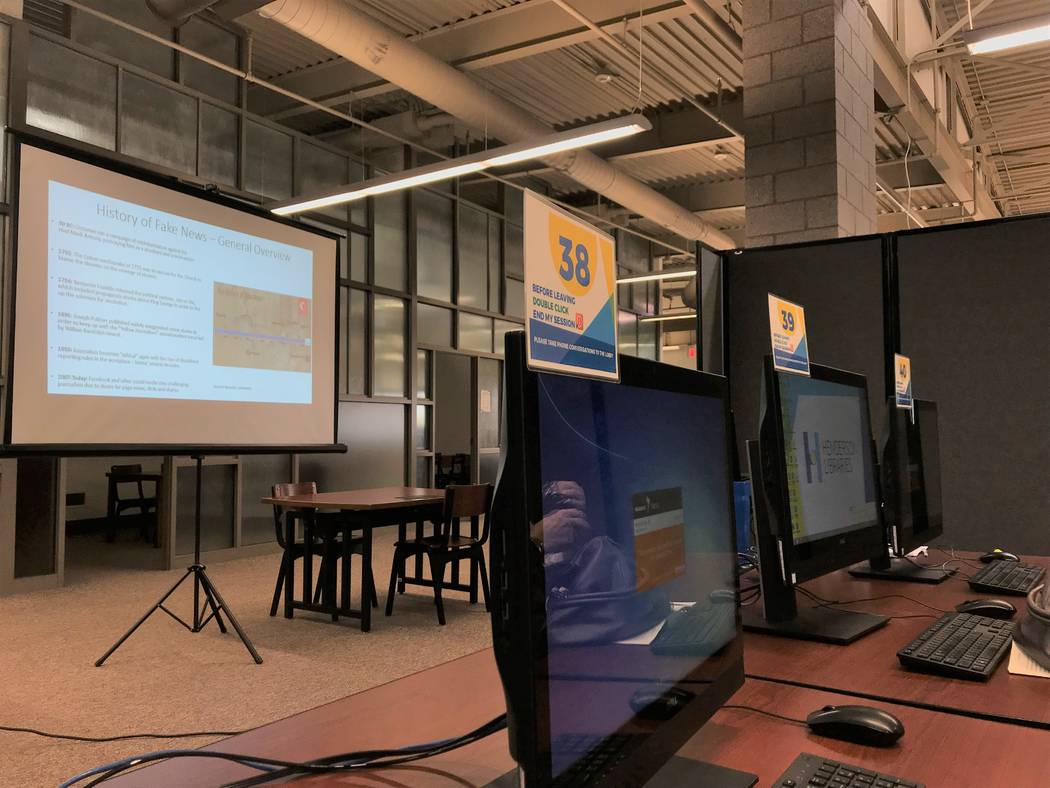 Jeanette Jones, founder of a research firm and a librarian with Paseo Verde Library, has simple motivation for teaching a “Tackling Fake News” class.

“If not us, then who?” she said, adding that libraries are in the business of disseminating trustworthy information to the public.

This was Jones’ third year teaching a class on online news. She said previous classes included information on both fake news and online privacy. This year she felt that fake news should be taught separately.

Jones’ presentation March 20 defined fake news as stories “created to drive up web traffic and ad revenue and to advance an agenda or to ‘troll.’” An internet troll is slang for a person who comments online to upset and distract people. Jones also clarified that parody or satirical news is written just for entertainment purposes.

Jones advised the small group to “develop a critical mindset and question everything you read.”

The small group sat in front of library computers; some followed along with Jones’ projected presentation and followed her links to fact-checking and bias-checking websites. Others just listened intently. Some of the websites they visited were Allsides.com, Factcheck.org, Politifact.com and apnews.com/apfactnews.

Jones told the audience about an editorial in Forbes a few years ago that called libraries obsolete. She said in that case, the writer was an economist but didn’t have the experience to doubt the usefulness of libraries. A few in the audience acknowledged they had read the piece and were skeptical.

Jones mentioned that social media posts are often hard to distinguish between real versus “influence campaigns.” She had a few samples in her presentation of influence campaigns on Facebook from a group called “Resisters.” In the social media posts, Jones recommended looking critically at language; her sample posts had some obvious grammatical errors that helped distinguish them.

Jones, the co-author of “Market Intelligence for Procurement Professionals: Research, Process and Resources,” opened by explaining that fake news has been around forever. On the bright side, she said, some fake-news sites she has come across are no longer online.

“The fight for fake news really is working, and there is a lot of people out there now that are really angry about what is going on that are becoming kind of watchdogs themselves,” Jones said.

“We are in a new world in many ways,” Phelan said during an interview after the class, adding that “I think libraries have always been the gatekeepers of that as far as trying to verify, authenticate and have trustworthy information.”

Jones recommended that attendees make sure the headline of what they are reading matches the content, and that fake-news headlines are sometimes written in all capital letters.

Also, she advised to avoid any “one-source story” and ensure that the topic has been covered on other websites.

Lastly, Jones told attendees to trust their gut. If a story seems fake, chances are that it is.