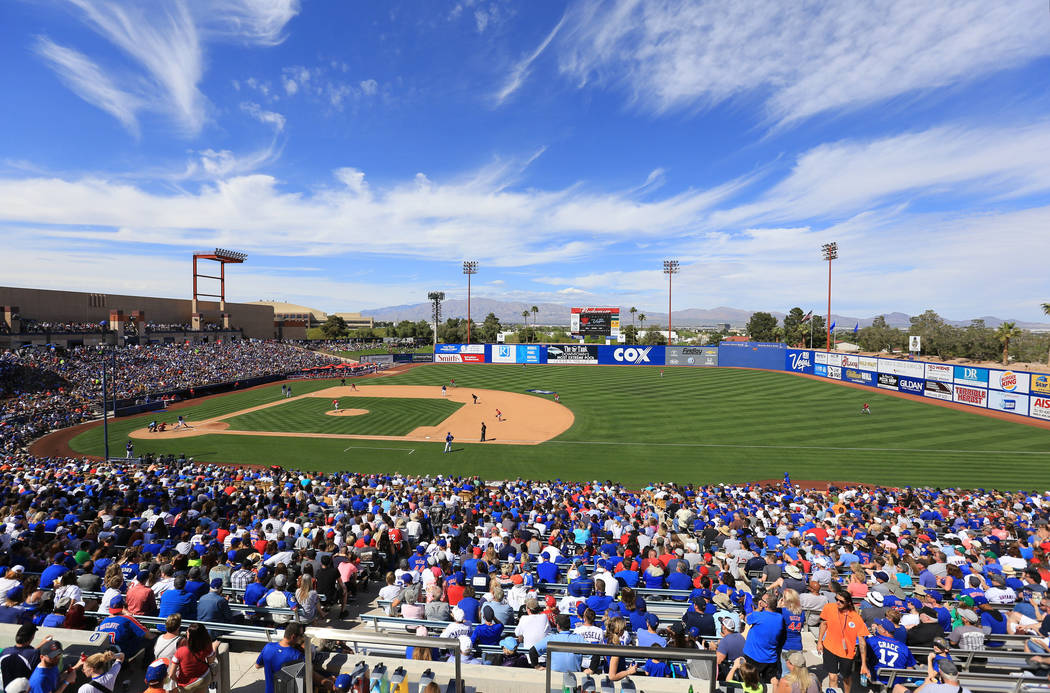 Fans watch a game between the Chicago Cubs and the Cincinnati Reds at Cashman Field in Las Vegas on Sunday, March 26, 2017. (Brett Le Blanc/View) @bleblancphoto

Suddenly Las Vegas has become the most-talked-about town in America as the ideal site for professional sports teams.

The National Football League’s Raiders will begin play here as soon as a stadium can be constructed.

It’s no secret that the National Basketball Association has an eye on Las Vegas as a future team site.

Two months ago Major League Baseball Commissioner Rob Manfred told a group of sports editors, “If we were looking at relocation, Las Vegas would be on the list.”

Most recently, owners of a franchise in the United Soccer League proposed a lease agreement with the city to begin play next year at Cashman Field. Some city officials are overjoyed at the prospect.

Then there’s the Las Vegas 51s baseball team of the Pacific Coast League — the longest-standing professional sports franchise in Nevada. The team made its debut in 1983 as the Las Vegas Stars and has drawn more than 300,000 fans to Cashman Field in each of its first 34 years, with a total attendance of more than 11.3 million.

That’s a lot of fan support for a franchise that doesn’t appear to be getting much respect from some of the power brokers in Las Vegas. For example, for more than four years 51s ownership has sought to obtain the new stadium the team desperately needs in Summerlin.

It would be on a tract being developed just east of Downtown Summerlin, next to the ice hockey structure under construction as a practice facility for the Golden Knights. In essence, it would form a Summerlin sports complex — a tag that has a nice ring to it.

But thus far, all we hear about that ring is a buzz, something like, “yeah, a baseball stadium in Summerlin is coming.” To that you can add, yeah, so is Christmas.

Meanwhile, the concessions and restroom lines at archaic Cashman Field were just as long as at any other sold-out game during opening day this year. That was April 11, when 8,451 fans crammed the stadium.

Of course, who can forget the stink — figuratively and literally — of a couple of years ago, when the old plumbing at Cashman Field overflowed just before the start of a game?

Now that the city has retaken ownership of the Cashman Complex from the Las Vegas Convention and Visitors Authority, don’t expect conditions to change much for the better. The soccer folks are chomping at the bit to play at Cashman Field, and Mayor Carolyn Goodman and the City Council are only too happy to oblige. Now what would that do to the baseball stadium turf?

The mayor has spoken repeatedly of the benefits of soccer at Cashman Field. The point is this: City Hall has all but conceded that the baseball team will move to Summerlin.

The 51s are owned solely by The Howard Hughes Corp., which also owns the land for a new stadium opposite Downtown Summerlin. Hughes would donate that site, which it values at $40 million, for a ballpark. But the folks at Hughes are also looking for some assistance, the kind under which a new tax is making possible the $750 million needed to help build a stadium for the Raiders. After all, the city paid the $24 million needed to build Cashman Field in 1982.

Now there’s the rub. The stadium site for the 51s is in unincorporated Clark County, and the power brokers who came up with the accommodation for the Raiders won’t hear of another stadium. In fact, Clark County Commission Chairman Steve Sisolak, when asked recently about a stadium for an MLB franchise, replied:

“I don’t see baseball. That would require another stadium. I don’t see a lot of support for another sport that needs a specific stadium.”

Herb Jaffe was an op-ed columnist and investigative reporter for most of his 39 years at the Star-Ledger of Newark, New Jersey. His most recent novel, “Double Play,” is available. Contact him at hjaffe@cox.net.