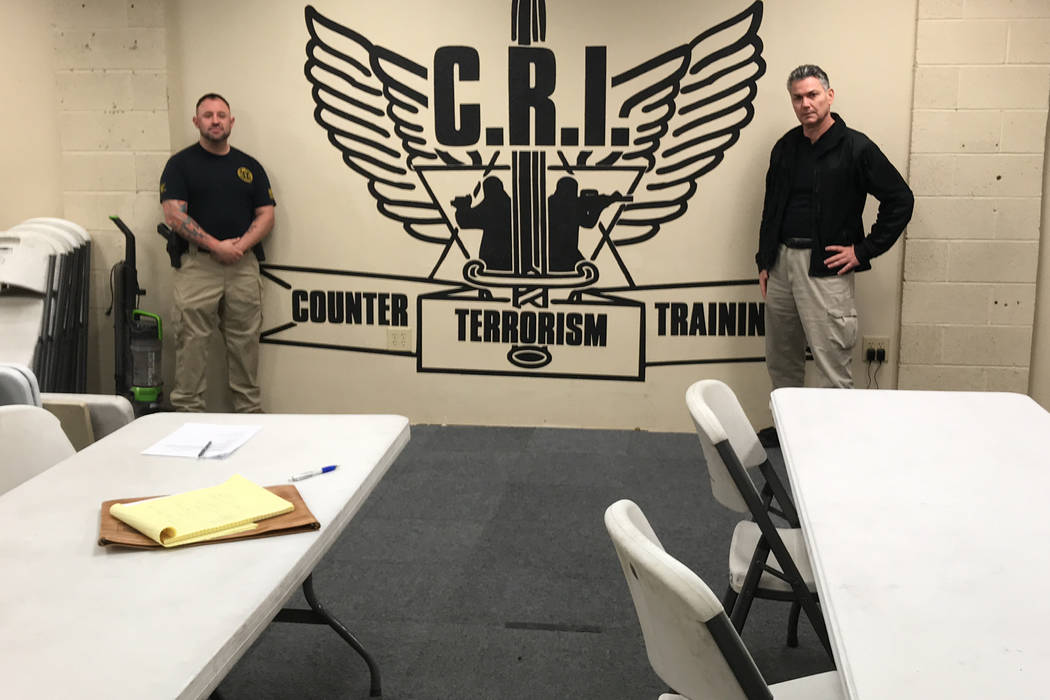 Chabad of Summerlin/Desert Shores was in the process of a major overhaul of its security system, with the assistance of a grant from the federal Department of Homeland Security, well before the anti-Semitic massacre of 11 congregants at a Pittsburgh synagogue on Oct. 27.

It had been working in close liaison with a renowned counterterrorism training school in North Las Vegas that maintains a teaching staff of combat-hardened veterans of the wars in Afghanistan and Iraq. The school is led by the man who created the first counter-suicide-bombing program for the state of Israel.

But concerns nationally over the escalation in hate crimes and the dramatic rise in anti-Semitic attacks, with statistics supported most recently by the FBI, has brought a public response from that man, Doron Benbenisty, who also is the founder of the counterterrorism training school known as CRI (Crisis Response International).

Benbenisty had made it a point of keeping a modestly low profile since the school moved into its veiled North Las Vegas headquarters 14 years ago.

“The tragedy of the Pittsburgh massacre has changed our thinking,” he told an audience of Chabad synagogue congregants, accompanied by a demonstration on how to protect lives against terrorist violence.

“We feel very fortunate to have come to know the people in CRI, especially during these difficult times,” said Rabbi Yisroel Schanowitz, director of Chabad of Summerlin/Desert Shores, 2640 Regatta Drive. “I’m deeply grateful for their assistance in helping us to create a more effective security program.”

Coincidentally, Benbenisty and his wife, Chaya, who is president of CRI, also reside in Desert Shores.

“The counterterrorism program we’re helping to create for this Chabad is the first of its kind that we have done for any synagogue,” Benbenisty said in an interview at CRI’s headquarters. He added that CRI is equally prepared to volunteer its services to other synagogues as well as to churches and religious facilities of all faiths, “as long as they are friendly to the United States and to Israel.”

“Synagogues, Jewish schools and Jewish community centers are under constant threats from various hate groups and terrorist organizations. In many cases, upgraded protection plans and other security improvements are needed and should be implemented as soon as possible,” he explained. Benbenisty said that interested parties can contact him via CRITraining.com or call 702-235-9711.

Benbenisty and Jeremy Shechtman, chief executive officer of CRI and a U.S. Army veteran of 10 years with two rounds of combat in Iraq, explained the depth and intensity of counterterrorism training at the school. They provided a tour of CRI’s extensive training grounds, which includes classrooms, shooting ranges, scuba diving facilities and other, more sophisticated amenities.

Benbenisty, 49, was born in a suburb of Tel Aviv, Israel, and came to the U.S. 18 years ago. His first stop was Baton Rouge, Louisiana, for four years, where he established CRI. Then it was on to Nevada, although he pointed out that CRI maintains “law enforcement and counterterrorism connections elsewhere in the U.S.”

He entered the Israeli Air Force Flight Academy at the age of 15 and earned his aviation engineering degree. Benbenisty served in a helicopter unit in the Israeli Air Force for three years, then went to work for a security company that protected buses from suicide bombings, which have been a common occurrence in Israel.

“In 1996 I created the first counter-suicide-bombing program in Israel. The program is still in use today,” Benbenisty said proudly.

A prior version of this incorrectly identified Doron Benbenisty’s role in the Israeli Air Force.