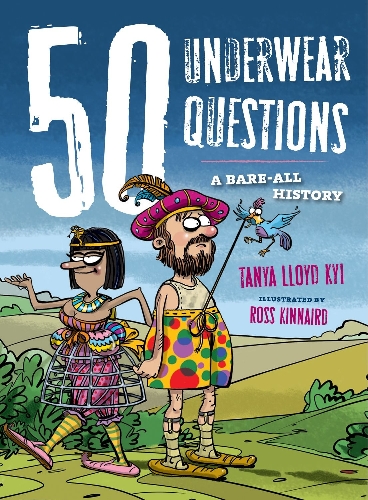 A few months ago, back when you were doing some school shopping with Mom or Dad, you had a list of clothes you wanted to find.

You might have argued for new kicks and new jeans. Maybe you had your eye on a totally cool shirt or shorts. And if you were really thinking, you might have remembered to buy clothes that almost nobody would ever see.

Have you ever wondered why you wear underwear? In the new book “50 Underwear Questions: A Bare-All History” by Tanya Lloyd Kyi, illustrated by Ross Kinnaird, you’ll find out.

Imagine a mummy in granny-panties.

Okay, don’t, because mummies never wore granny-panties. Back then, there were no malls or discount stores so most people wore loincloths as underwear because loincloths were simple to make with animal skins or woven fabric, they were protective, and they were warm. We know that King Tut wore loincloths because 145 of them were found in his tomb.

Actual real underpants were probably created by the Persians a few hundred years BCE. Historians believe the Romans might have borrowed the two-legged garment and used it instead of the skirt-like outfit they had for the battlefield. Like loincloths, underpants were perfect for protecting one’s posterior.

In Medieval times, underwear wasn’t necessarily worn under. It was common to see farmers or laborers working outside in clothes meant for inside but over time, undies became something private and embarrassing. People wore underwear. They just didn’t like to talk about it.

Still, just like every other piece of clothing, there were fads when it came to undies. In the 1500s, men’s underwear doubled as a kind of wallet. In the 1800s, women wore petticoats that made their dresses wider than doorways. Inuit natives of northern Canada wore a double layer of fur beneath their clothes. And barely 100 years ago, it was common to put on warm woolen long underwear in the fall and leave it on until spring.

Today, you can wear boxers or tighty-whiteys. You can put on a gonch (western Canada) or skivvies. You can wear a bra (invented less than 100 years ago) or Spanx (not as new as you think). Whatever you call the clothes beneath your clothes, you’ve got underwear under there.

“50 Underwear Questions” is funny. It’s cute, the illustrations by Ross Kinnaird are great, and most of the book is perfectly kid-friendly. But there were things here that caught me by surprise.

Seemingly meant for kids 9 to 14, there are some pretty grown-up items in this book that parents might not want children on the younger side of that age bracket to read about. “Going commando” was one of them. A page discussing strippers, exotic dancers, thongs and G-strings was another. I suppose Kyi had to include something about them in a “Bare-All History” but still

I think this book is great — but not for the age group it seems to be intended for. Give a younger child “50 Underwear Questions” and you might be emBAREassed.