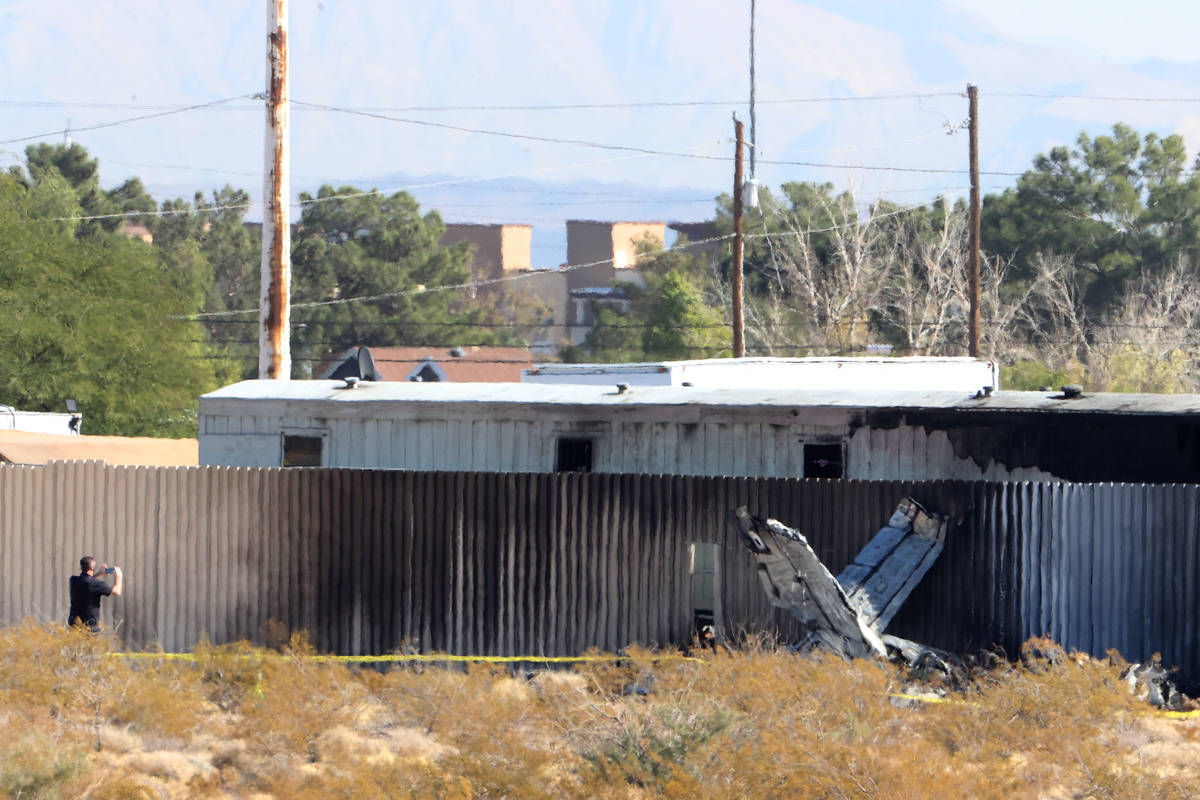 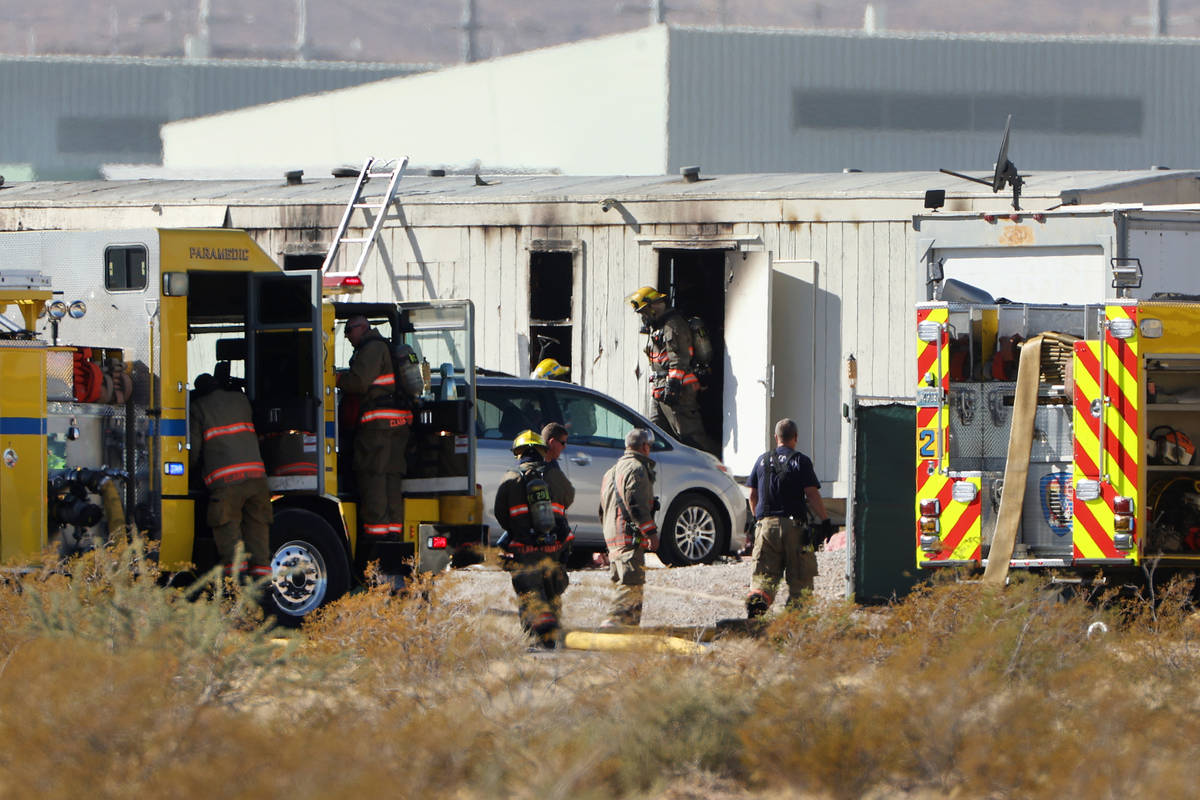 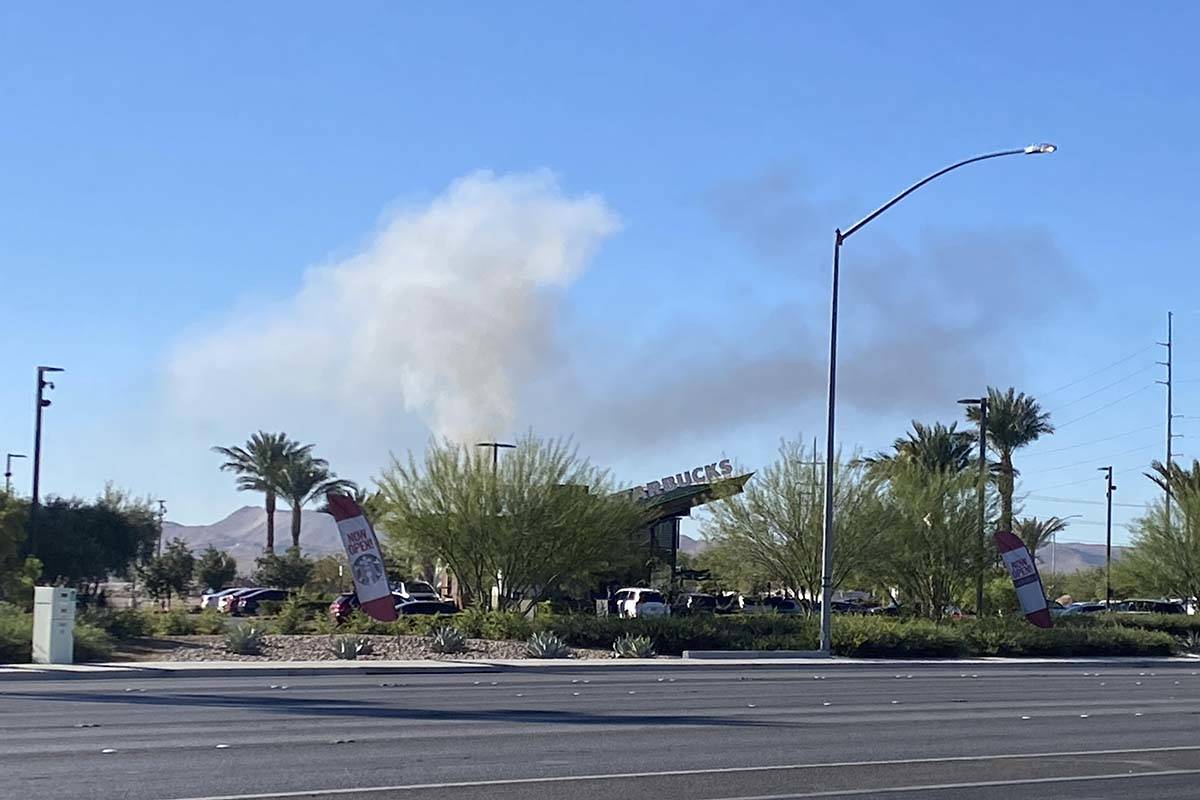 Smoke can be seen from Blue Diamond Road and Valley View Boulevard after the report of the crash of a small plane in south Las Vegas on Thursday. (Glenn Puit) 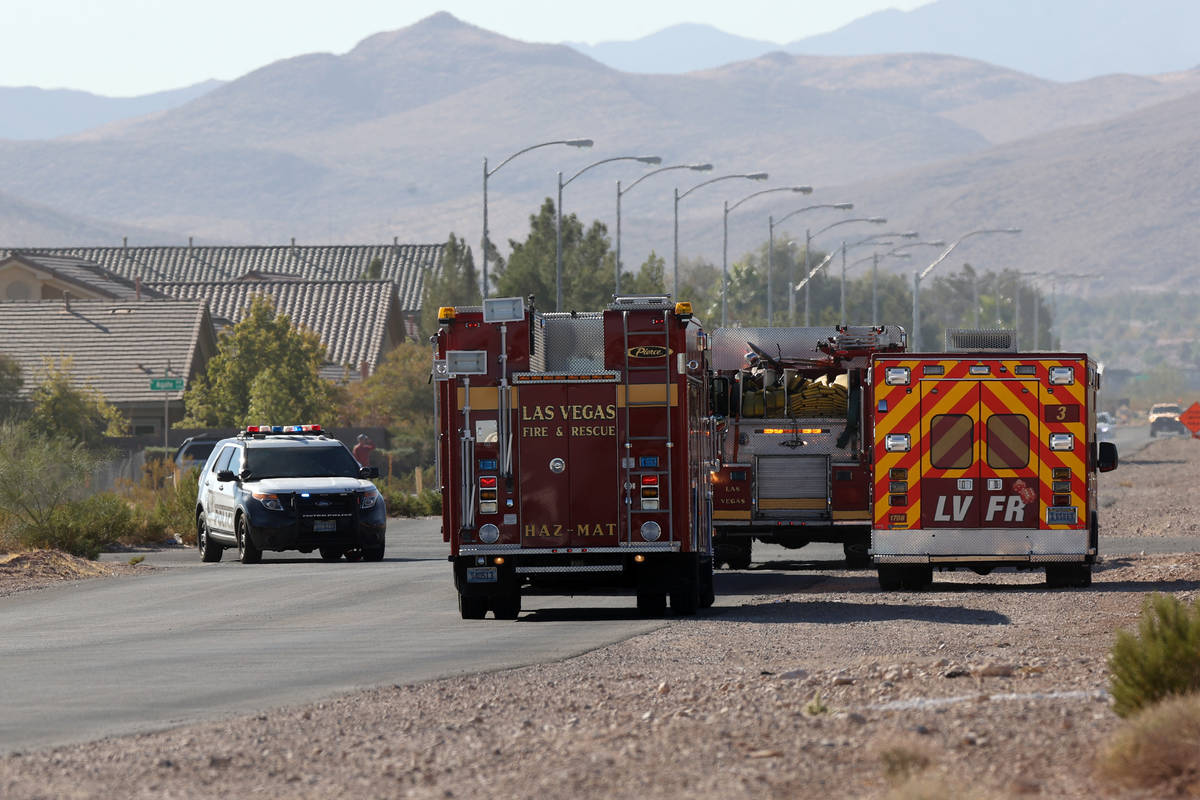 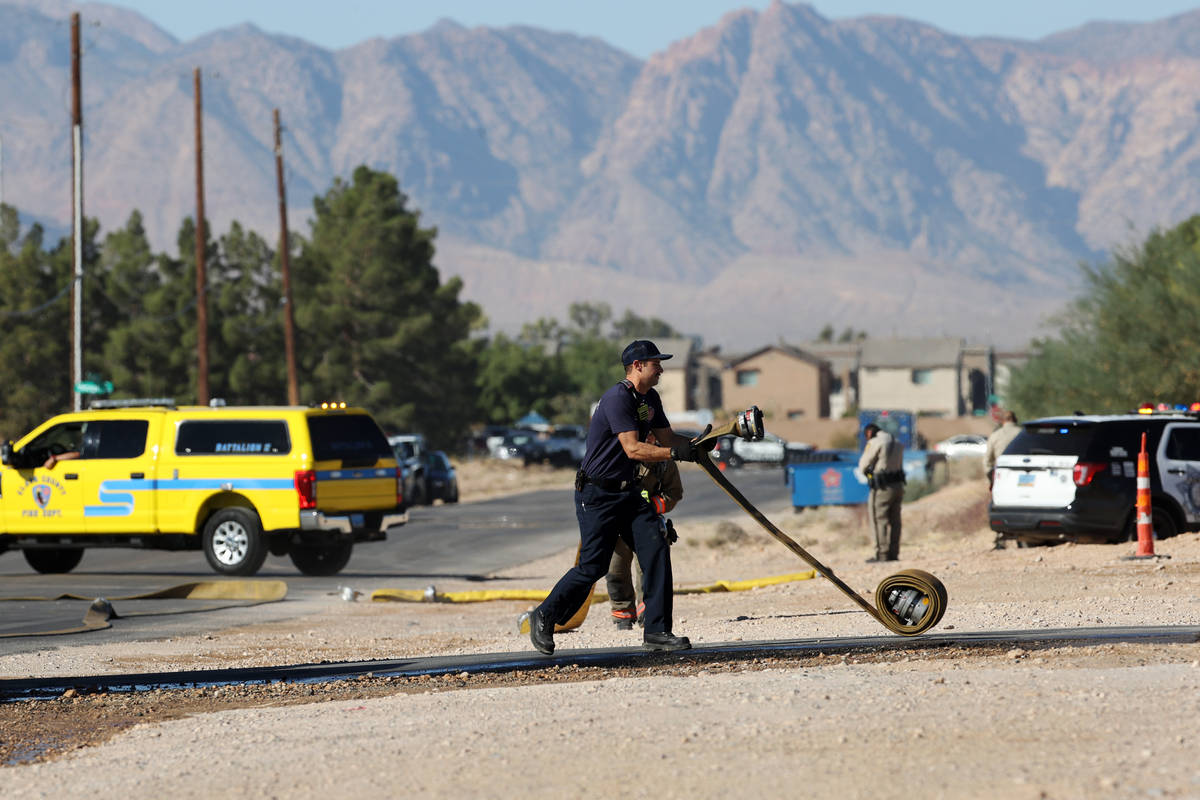 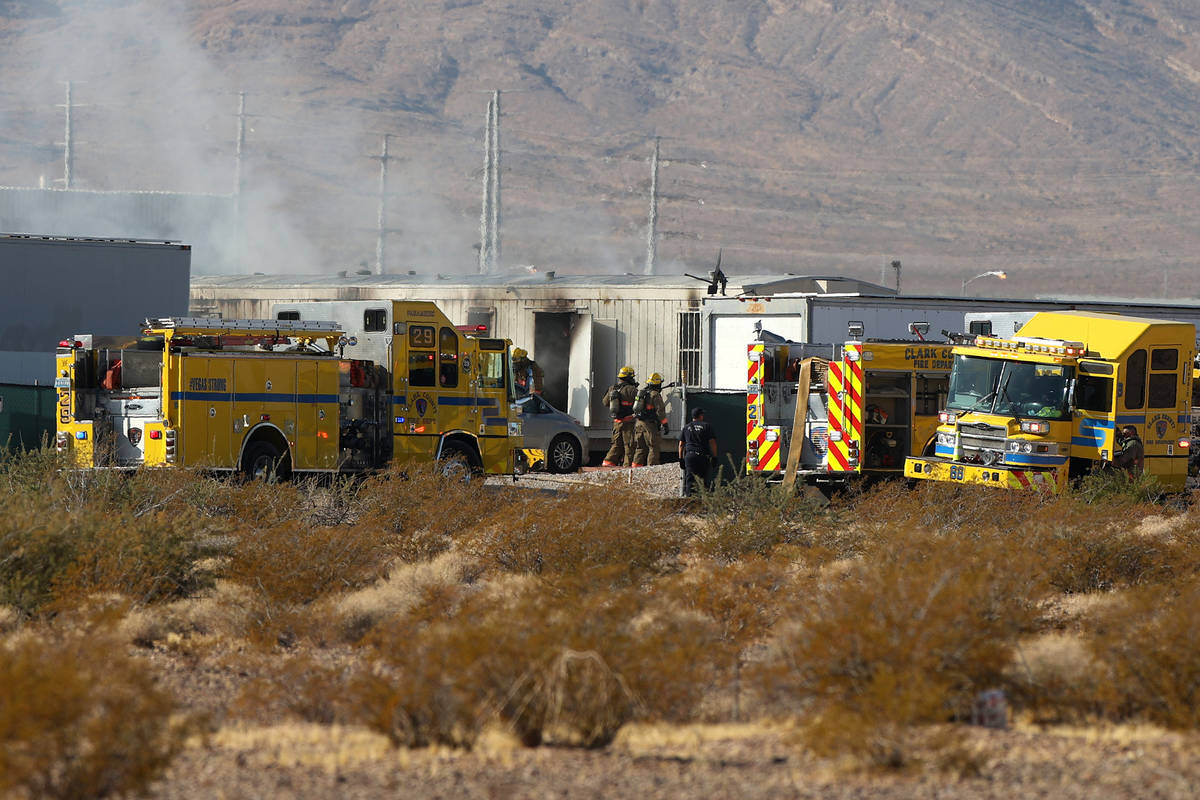 The twin-engine Cessna 310 plane crashed in a desert lot in a residential area near Raven Avenue and Hinson Street, southeast of Decatur Boulevard and Blue Diamond Road and near the Henderson Executive Airport, the Federal Aviation Administration said in a statement.

Spokeswoman Emma Duncan said the agency believes the plane was on its way to the Gillespie Field Airport in San Diego.

Bruce Langson said the plane crashed into his property at 4005 Raven Ave., where he is building his home. Langson was in a construction trailer on the property when the aircraft slammed into an adjacent block wall.

“It was awful, awful,” Langson said. “It sounded like a low-flying helicopter. I could hear the propeller turning over.”

He heard a crash, and the explosion followed. The trailer was splashed with fuel from the plane and caught on fire. The bed of a nearby pickup truck also caught fire.

Langson said he grabbed his computer, got close to the ground, and exited the trailer before calling 911.

“I ran around and saw it was just totally engulfed in a fireball,” Langson said. “There was nothing I could do personally to assist anyone there. It looked like a movie scene from the worst horror movie you’ve seen.”

Fire crews were called to the scene at 9:40 a.m., Clark County Fire Department Deputy Fire Chief Warren Whitney said. The plane had taken off from the North Las Vegas Airport shortly after 9:30 a.m. and was in the air for about nine minutes before crashing, he said.

During a briefing near the scene Thursday morning, Deputy Fire Chief Thomas Touchstone said the plane crashed into a cinder-block wall on the outskirts of a construction site in the desert lot.

When the 1974-model plane caught on fire, it spread to the nearby construction trailer, he said. No bystanders were injured.

Airplane registration records identify the registered owner of the plane as Robert Golo, of San Diego, California. A LinkedIn profile lists a Robert J. Golo as president of Air Charter Express, Inc., which is based in San Diego.

The Clark County coroner’s office had not identified either of the crash victims as of Thursday afternoon.

Langson said it was clear that no one had survived.

“It’s very sad for me to think about what went down during that instant,” he said. “The only relief I get is knowing that they did not suffer.”

Langson said the crash only damaged his property. The next nearest home is roughly 600 feet away.

Anthony Lianzo told the Las Vegas Review-Journal that he saw the crash while driving through his neighborhood. He described a two-propeller aircraft flying about 100 feet from the ground. He said the plane’s left propeller did not appear to be working.

“I saw the plane basically rear to the right,” Lianzo said. “He was way too low.”

He then heard a loud boom and saw a huge ball of flames.

“I think he was trying to find a safe spot to land,” Lianzo said. “It looked like he wasn’t going to make it anywhere.”

“My husband saw the smoke and heard the sirens,” Robertson said Thursday morning.

Jessica Basinger said her children, ages 4 and 5, were outside playing while at the Creative Kids of Las Vegas school on Pebble Road when the plane crashed.

“They just said it was a big, huge boom,” Basinger said. “And they all got taken inside. The teachers took every precaution that they needed.”

“I’m very thankful for the teachers,” she said.

Touchstone said during the briefing Thursday morning that no one nearby was evacuated after the crash.

The National Transportation Safety Board is helping the FAA investigate the crash, the agency said.