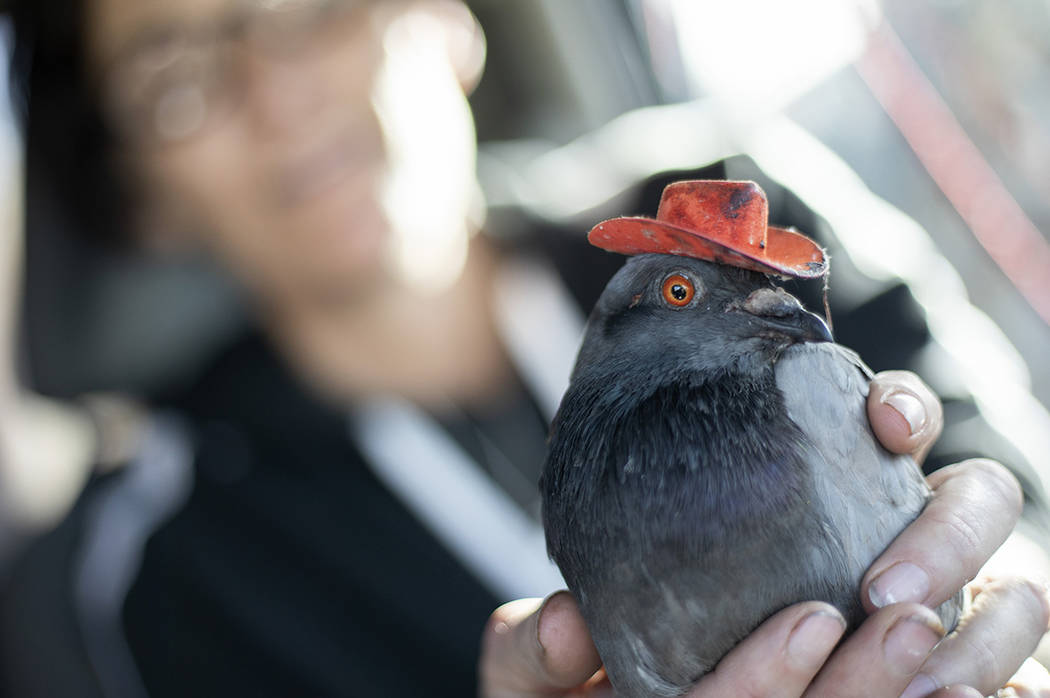 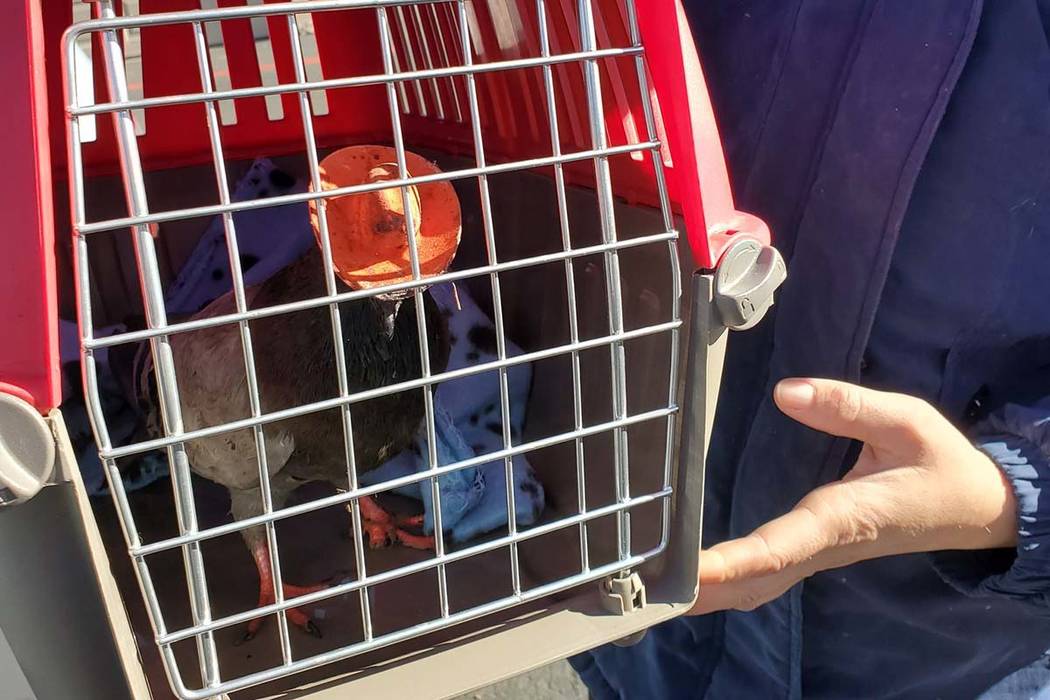 "Billie the Pidge," a third pigeon with a cowboy hat attached to its head, was found near Maryland Parkway and Tropicana Avenue on Tuesday, Dec. 17, 2019. (@Word_Hord/Twitter) 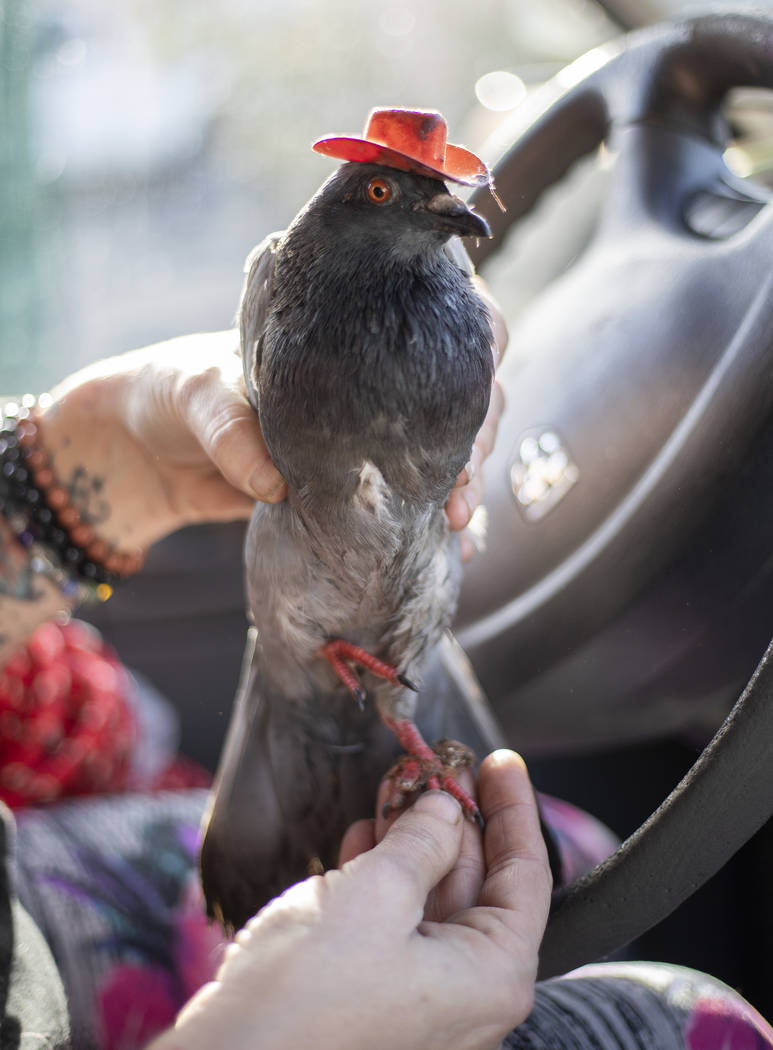 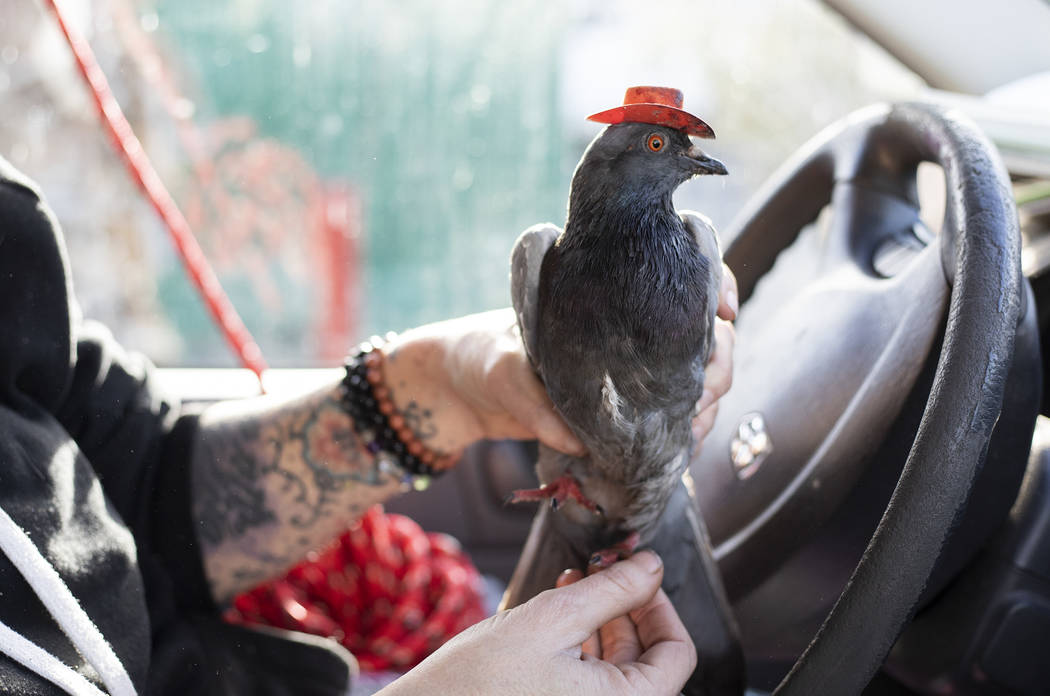 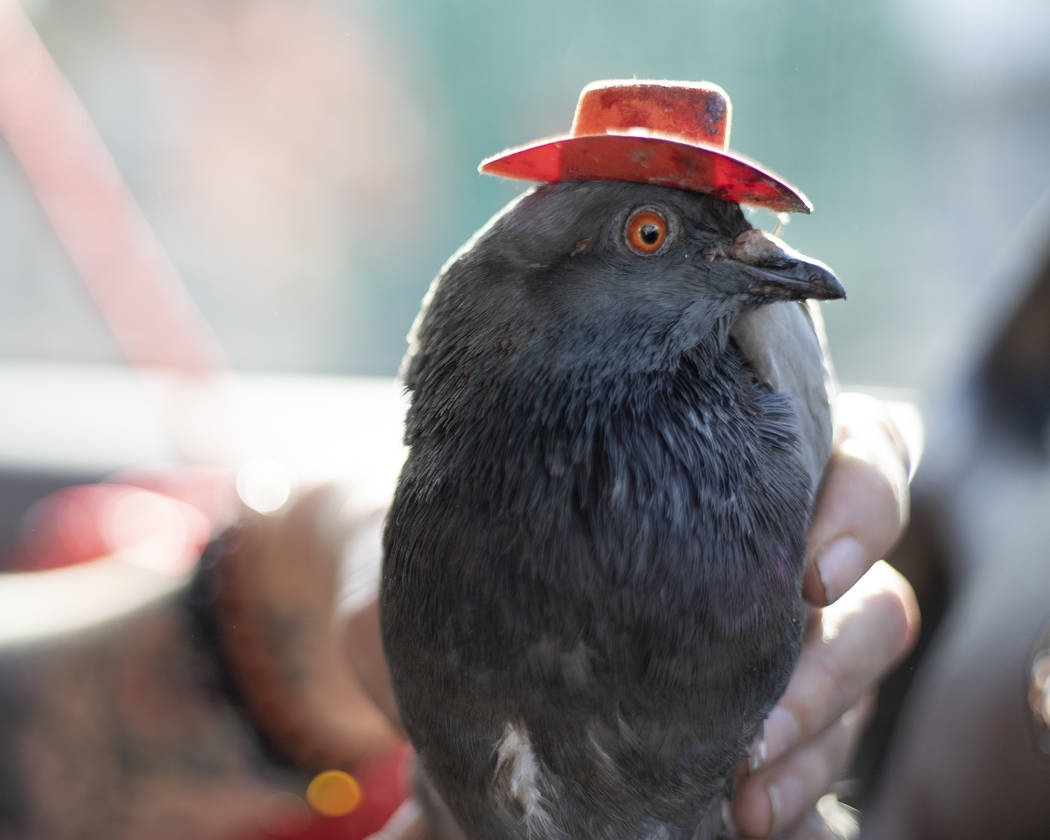 Two of Las Vegas’ cowboy hat-wearing pigeons are now hatless, thanks to volunteers from a pigeon rescue group and a local vet.

“Billie the Pidge” and “Cluck Norris,” were both relieved of their glued-on lids Tuesday by a local veterinarian who carefully separated the hats from their head feathers. After the successful hat-ectomies, both birds were bound for the home of Mariah Hillman, founder of the rescue group Lofty Hopes, who will care for them until they can be released.

“They’re both doing well,” Hillman said. “They’re happy to have their hats off.”

Billie the Pidge, a previously unreported hat-wearing pigeon, was captured earlier Tuesday in the same area where Lofty Hopes trapped Cluck Norris the day before.

Hillman and other volunteers captured Cluck Norris on Monday near Maryland Parkway and Tropicana Avenue and discovered that his tiny 10-gallon topper had been glued to his head feathers. It appeared that the hat pulled out some of the feathers and was hurting him, she said.

When she was apprehended in the same area, Billie was “a little greasy, a little stinky” and appeared to be dehydrated, Hillman said, but otherwise she appeared well-fed and healthy.

However, Billie is suffering from “string foot,” a phenomenon where string becomes tangled around a bird’s ankle, causing the foot to lose circulation. Hillman said it often happens while birds forage for food in dumpsters or similar places. Billie is missing a toe, likely as a result of a bit of pink yarn that Hillman found wrapped around the pigeon’s leg.

Hillman trapped Billie while trying to catch a different hatted pigeon dubbed “Coolamity Jane.” She’s clad in a faded pink cowboy hat, has spotted wings and has been seen frequenting neighborhoods around UNLV.

Hillman said she’d heard reports of several pigeons in different-colored hats from residents in the area, but had yet to spot them until Billie the Pidge was corralled. For now, Coolamity Jane remains at large and the search will continue.

Anyone who finds a sick or injured pigeon should first catch the bird to keep it from further harm, Hillman said. Humans can’t contract any diseases from touching a pigeon with their bare hands, she said, but a shirt or towel can be used to wrap and move the birds.

Hillman said people should never try to force feed pigeons or drip water into their mouths, as they breathe through a hole under their tongue that can easily be blocked or filled with liquid.

Once the bird is safe, call a local veterinarian’s office and bring the pigeon in for treatment, or contact Lofty Hopes at (702) 234-6990.