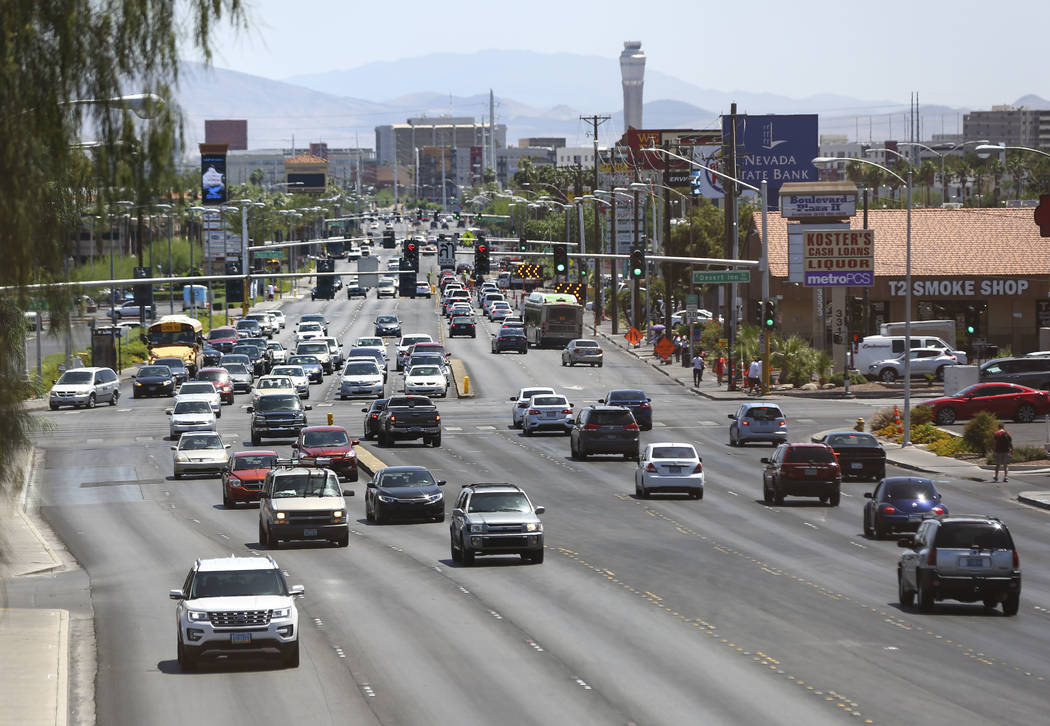 A view looking south down Maryland Parkway from the pedestrian bridge outside of Sunrise Hospital in Las Vegas on Wednesday, May 23, 2018. Chase Stevens Las Vegas Review-Journal @csstevensphoto

An 8.7-mile light rail line should be built to quickly move transit passengers along Maryland Parkway, according to a recommendation issued Thursday by a 36-member advisory panel for the Regional Transportation Commission of Southern Nevada.

If approved by the RTC’s board of directors in September, the $750 million light rail line could start running along Maryland by 2025 and could be funded by a mix of federal, state and local money.

The RTC’s Transportation Resource Advisory Committee and Community Collaboration, known as TRAC, selected light rail after a two-hour discussion that touched on less costly options including a set of bus rapid-transit lanes that could cost up to $335 million or a $29 million improvement project on Maryland.

“Oftentimes these decisions are anticlimactic in terms of what work needs to be done moving forward in terms of getting the necessary funding, approvals and collaborations in place to form what needs to be done,” Snyder said. “This really clears the deck in terms of being able to start implementing the plan.”

A trip on the proposed light-rail line would start at McCarran International Airport and travel past UNLV, Sunrise Hospital and the Boulevard Mall on Maryland Parkway, cutting west on Carson Avenue through downtown Las Vegas.

From there, the route would head south on Casino Center, near the Golden Nugget hotel-casino, to the Bonneville Transit Center, where it would veer west to go past the county administrative center, Las Vegas Premium Outlets North and on to a terminus near University Medical Center.

Supporters of the project said that high-density residential and commercial projects often spring up along light-rail routes, as seen in Phoenix, Denver, San Diego, Los Angeles and other cities across the country.

RTC officials said that the proposed line’s proximity to the airport, hospitals, a mall and other businesses would be ideal for Maryland Parkway, where more than 9,000 bus riders and 35,000 vehicles travel daily.

“I just became so converted to urban light rail with regard to opportunities for economic development and redevelopment,” said Warren Hardy of the Associated Builders and Contractors, who served on the RTC advisory panel.

“It’s obviously more expensive to do, so I think we need to be mindful of that and we need to be deliberate when we talk about the advantages of this investment,” Hardy said. “I think, almost at the level of the stadium, it’s going to be a game-changer for our community.”