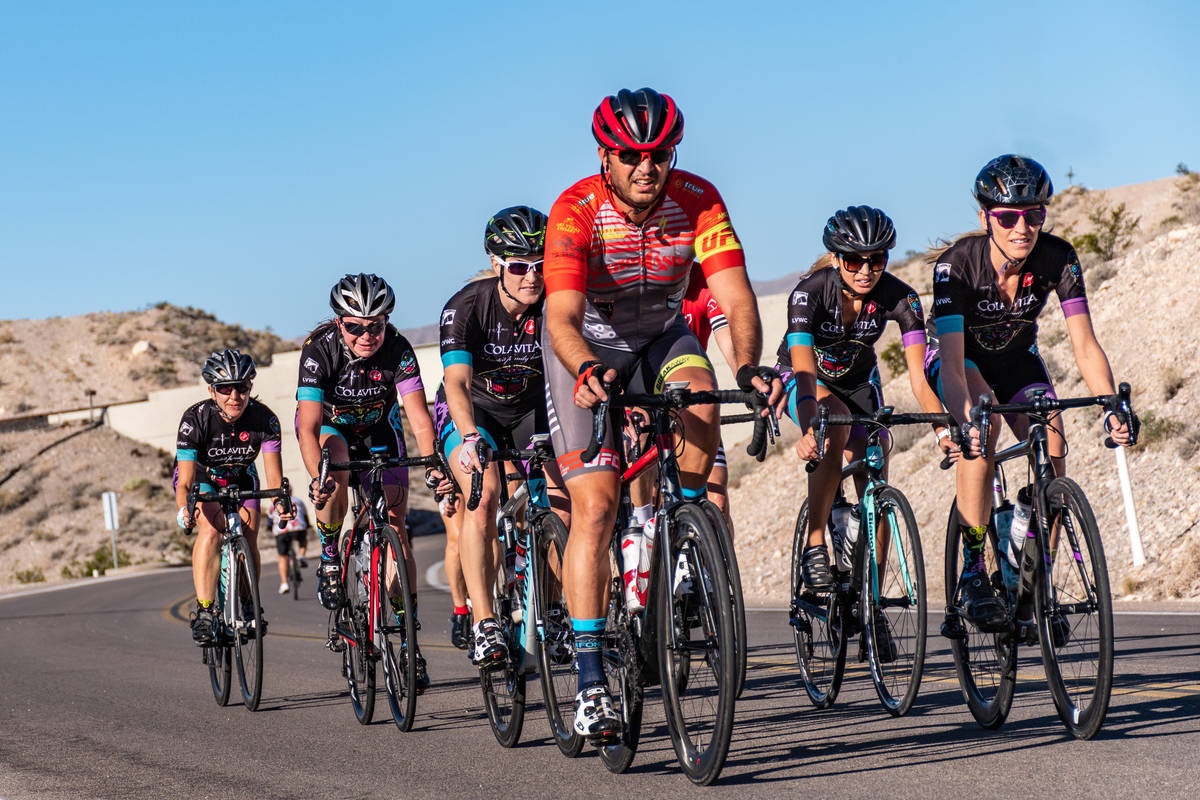 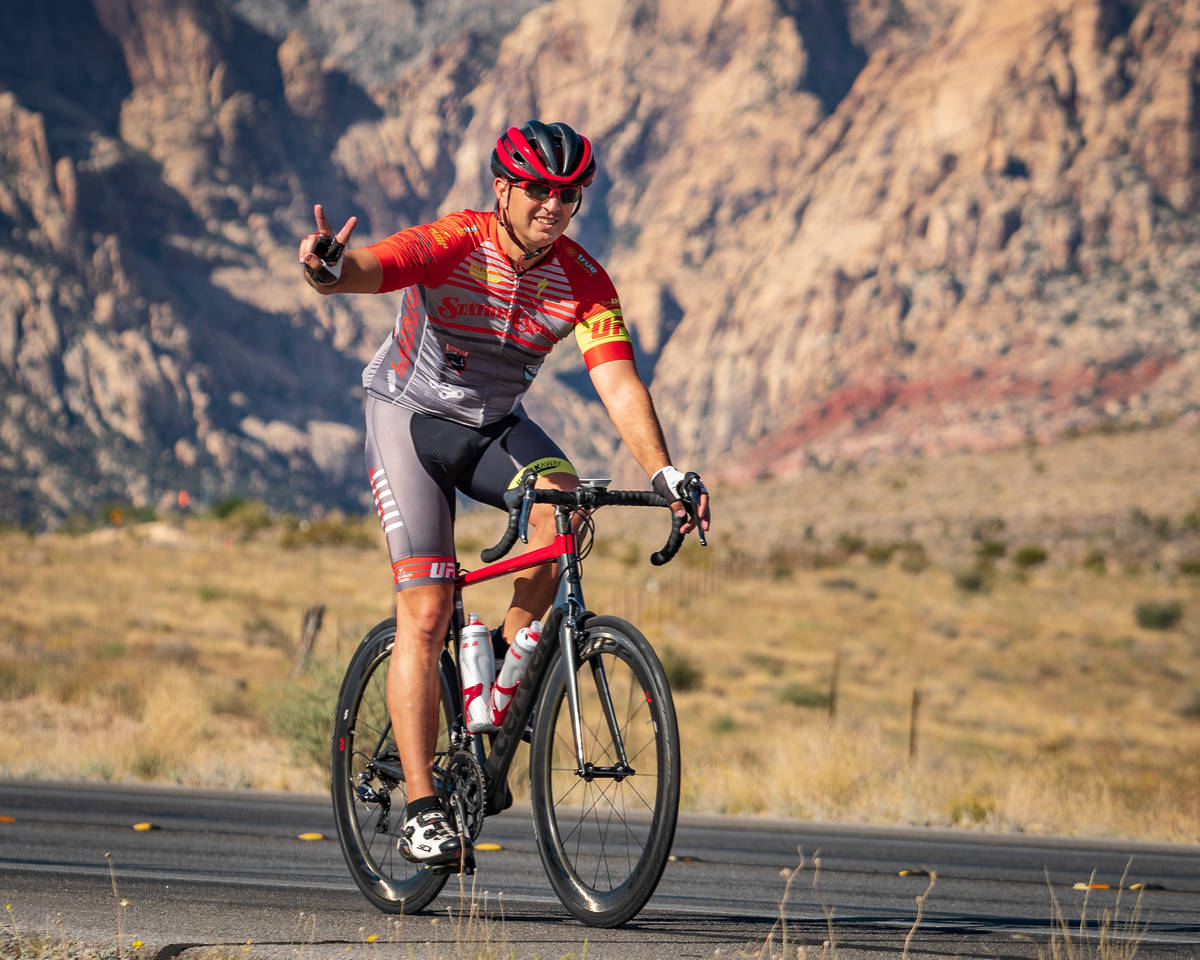 Aksoy Ahmet during a 2018 ride in the Red Rock National Conservation Area. Ahmet, a longtime cyclist, was among five killed during an informal ride near Searchlight on Thursday, Dec. 10, 2020, when a box truck struck a group of nearly 20 cyclists. (Hugh Byrne/Breakaway Cycling) 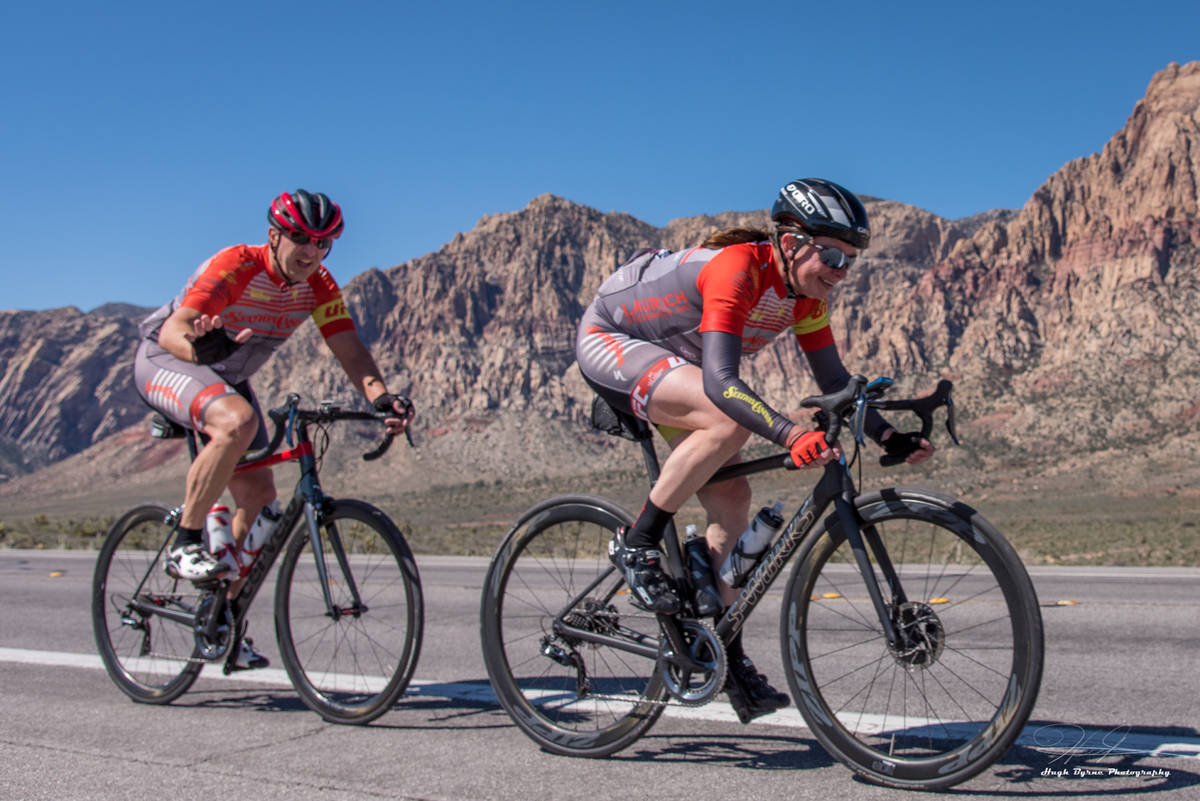 Aksoy Ahmet and his wife, Angela, during a 2018 ride in the Red Rock National Conservation Area. Ahmet, a longtime cyclist, was among five killed during an informal ride near Searchlight on Thursday, Dec. 10, 2020, when a box truck struck a group of nearly 20 cyclists. (Hugh Byrne/Breakaway Cycling) 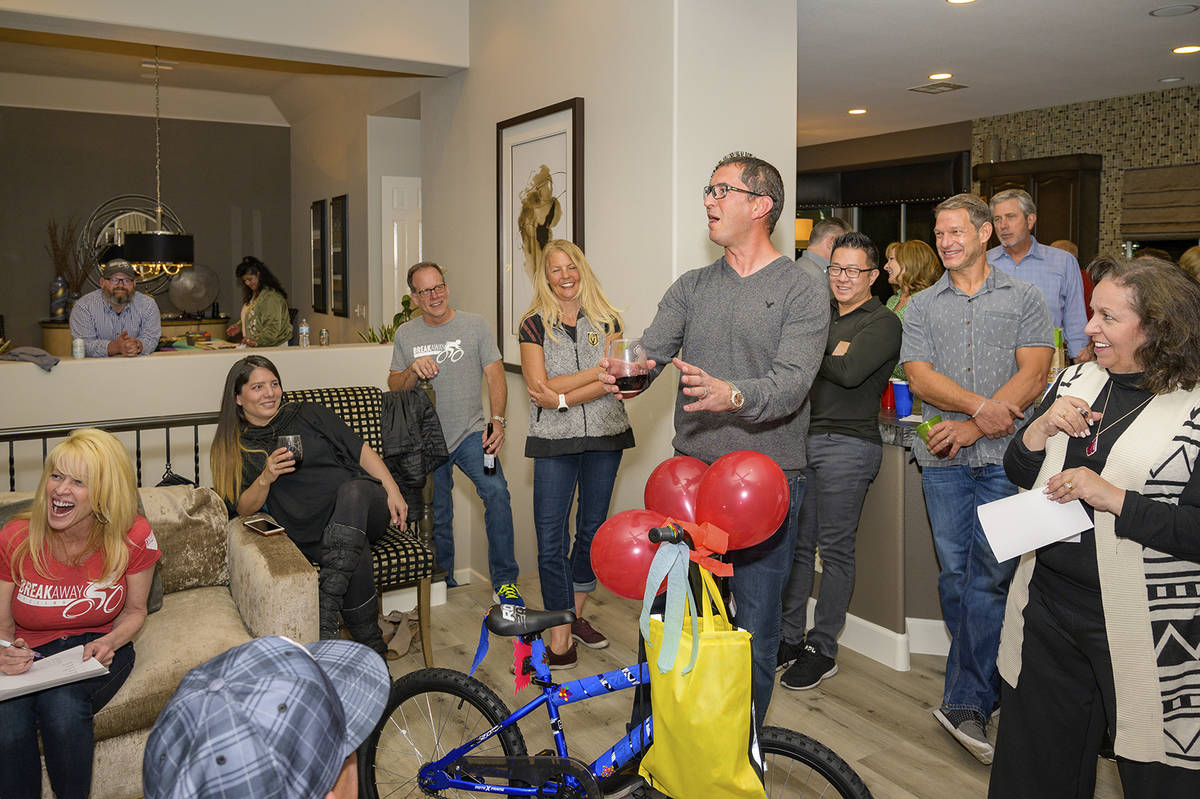 In this February 2020 photo, Aksoy Ahmet, center, entertains his teammates during a Breakaway Cycling gathering. Mark Weimer, co-founder of the nonprofit cycling group, said Ahmet was one of the most active members. (Hugh Byrne/Breakaway Cycling)

During a long race in 2015, Aksoy Ahmet noticed a bicyclist from another team who looked like he could use a break from the wind.

He had never met the man before that day, but Ahmet pedaled harder anyway, pulling in front of the stranger to give him cover.

“That’s just the kind of person Aksoy was — just always willing to help and share efforts,” recalled Mark Weimer, co-founder of Breakaway Cycling, one of the state’s largest cycling teams. “From that point on, we were great friends.”

Ahmet, a bright fixture in the Southern Nevada cycling community, was among five killed Thursday morning, on a stretch of highway near Searchlight surrounded by miles of open desert, when a box truck plowed into a group of nearly 20 cyclists on an annual ride around the roughly 130-mile Nipton Loop.

“And when he perished, he perished on the bike,” he said. “He went out doing what he loved.”

But the one thing the 48-year-old man loved more than cycling was his family.

“They’re not handling it well. He was everything to them, a true family man,” said Joanna Piette, also a co-founder of Breakaway Cycling, who spent the night Thursday at the Ahmet family’s Las Vegas home.

Ahmet’s wife, Angela, declined an interview request Friday but through Piette shared details with the Las Vegas Review-Journal about the man and their life together.

Before they were a couple, Angela Ahmet, a casino manager for Carnival Cruise Line, was boss to Aksoy Ahmet, a Turkish casino dealer born in northern Cyprus who had lived much of his life in London. He was “a social bunny” who often wore a stoic expression.

They met while working on the Carnival Destiny cruise ship, which first entered service in 1996, and spent the next 25 years together.

The couple shared a loved for “all things athletic,” a passion they instilled in their 17-year-old daughter and 14-year-old twin sons.

“Angela is just completely lost without him,” Weimer said.

Aksoy Ahmet was a stay-at-home dad. He did the cooking and the cleaning. He fed the dogs and purchased the groceries.

When Aksoy Ahmet wasn’t at home with his family, he was training — usually with his team, Breakaway Cycling. He raced competitively and had cycled for most of his life.

“Teammates remember Aksoy for a million things,” Piette said, “one of those being how he circled back around to pick up slower riders. He always cared for his fellow cyclists.”

But in recent years, according to Weimer, his friend’s love for the sport had taken a new direction: teaching and coaching kids.

Original members of Breakaway Cycling, which doubles as a children’s charity that strives to promote healthier lifestyles by riding bicycles, Aksoy and Angela Ahmet volunteered at nearly all of the charity’s events.

“We have close to 200 members, and they have always been in the top 10 percent of our team who volunteered their time,” Weimer said. “He was just an incredible human being. Passionate.”

It is Ahmet’s compassion, strength and kind heart — both on and off the bike — that Weimer will strive to mirror as he and the tight-knit Southern Nevada cycling community try to make sense of the deadly crash.

“It’s hard to give you this man in words,” Weimer said. “He was a loving man with a huge heart, passion for his sport, good person, great dad and great friend.”

Piette added: “This is all I have to say about my friend, Aksoy. The rest of his story is in my heart.”

Shortly before the crash, winds had started to pick up as the group approached Searchlight, and about seven cyclists broke off from the larger group to get a break from the wind behind their safety escort vehicle.

To honor the victims, Breakaway Cycling has launched an official website, where donations can be made. All proceeds will go to the families of the victims.