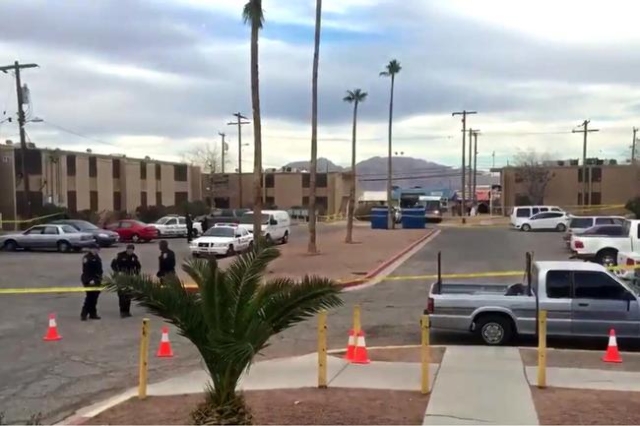 Two males and one female were shot in North Las Vegas and sent to UMC with non-life-threatening injuries. Screengrab (@rachelcrosby via Twitter) 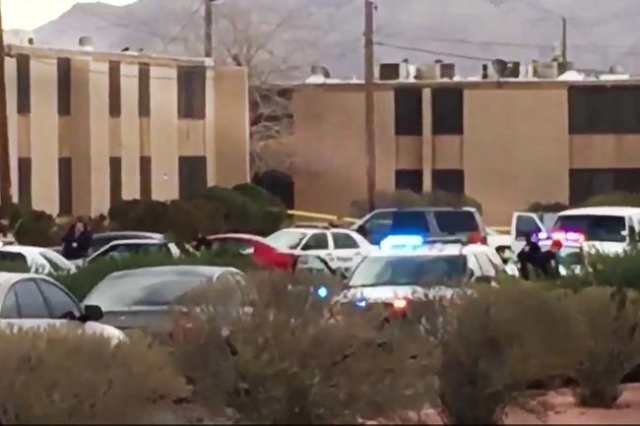 Two males and one female were shot in North Las Vegas and sent to UMC with non-life-threatening injuries. Screengrab (@rachelcrosby via Twitter)

North Las Vegas police responded to a shooting Friday at an apartment complex where another man was shot to death Thursday afternoon.

The call came in at 3:02 p.m. Friday that two men and a woman were shot at the apartments behind the Lucky Club casino, near the intersection of Civic Center Drive and Cheyenne Avenue, police said. All three suffered nonlife-threatening injuries.

On Thursday at the complex, 3301 Civic Center Drive, a confrontation at around dusk escalated into a fight that ended in the shooting death of an 18-year-old man, police said at that time. That man was taken to University Medical Center, where he later died.

It was unclear whether either shooting was drug or gang-related, but North Las Vegas police spokeswoman officer Ann Cavaricci said Thursday night’s was “not random.”

A 51-year-old woman who lives in the complex was visibly upset Friday afternoon.

“I’ve been here a year, I have kids in high school, I go to school just down the street,” she said, referring to the College of Southern Nevada’s Cheyenne campus, about a mile and a half away. “I’ve been planning on moving, and now it’s extremely important to get out of here with my kids.”

“I hear gunshots all the time,” she said.