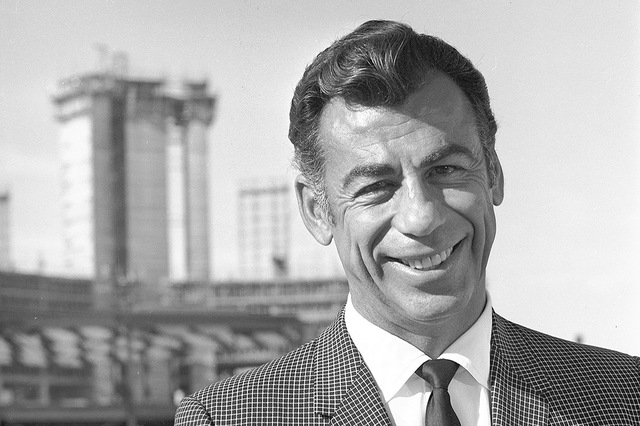 Kirk Kerkorian stands with the construction of the International Hotel in the background, Oct. 21, 1968. (Courtesy/Las Vegas News Bureau/Don English)

Kirk Kerkorian died in June, but the battle over his estate rages on.

The court-appointed guardian of the daughter of Kerkorian’s ex-wife last month petitioned the Los Angeles Superior Court to revoke the admission of the late Nevada casino magnate’s will to probate.

Kerkorian was MGM Grand International’s majority shareholder when he died June 15 at age 98. He founded MGM Resorts in the early 1990s and left his imprint on Las Vegas by building the International (now Westgate Las Vegas) in 1969, the original MGM Grand (now Bally’s) in 1973 and the current MGM Grand in 1993.

Kira Kerkorian is the child of Bonder, a onetime tennis pro to whom Kerkorian was married for 28 days in 1999. Kerkorian thought he’d fathered the girl until Bonder revealed Hollywood producer Steve Bing was the father. A security guard working for Kerkorian nabbed dental floss from Bing’s trash to get a DNA sample.

Kira Kerkorian is 17; she’ll turn 18 March 9. Mynewsla reports that in the petition, Augustine suggests Kerkorian lacked the mental capacity to make his will and was unduly influenced by its beneficiaries when it was signed and executed in July 2013.

“My role is to preserve Kira’s rights and do what’s in her best interests while she is a minor,” Augustine said by phone Friday. “Kira is the innocent party here. She hasn’t been a part of any of this; she had no control over her conception. I don’t want anybody to lose track of that.

“Kira was short-changed in the father department,” he added. “Kerkorian was elderly when Kira was conceived and couldn’t travel … and Bing walked. He figured, ‘I’m not under any legal obligation.’ … So he wasn’t around, either. And Lisa Bonder hasn’t brought any father figure into the picture since.”

Bonder’s child support fight with Kerkorian has lasted 13 years already. In 2002, she demanded $320,000 in monthly child support for then-4-year-old Kira; a judge granted $50,316 per month. The Associated Press reported that Kerkorian in December 2010 agreed to pay more than $10 million in back child support plus $100,000 a month for Kira, of whom he’d grown fond.

The AP said in the 2010 settlement, Kerkorian agreed to provide $100,000 a month until Kira turns 19, or graduates from high school, is no longer a full-time student or no longer lives with her mother full time. After that, the settlement says, the child support would drop to $50,000 a month.

Mynewsla says Bonder’s claim states the $50,000 monthly payments were to run from July 2016 through June 2017 and were made from July through November. Therefore, according to the claim, Kerkorian’s estate should receive a $500,000 credit, leaving a $1.3 million balance.