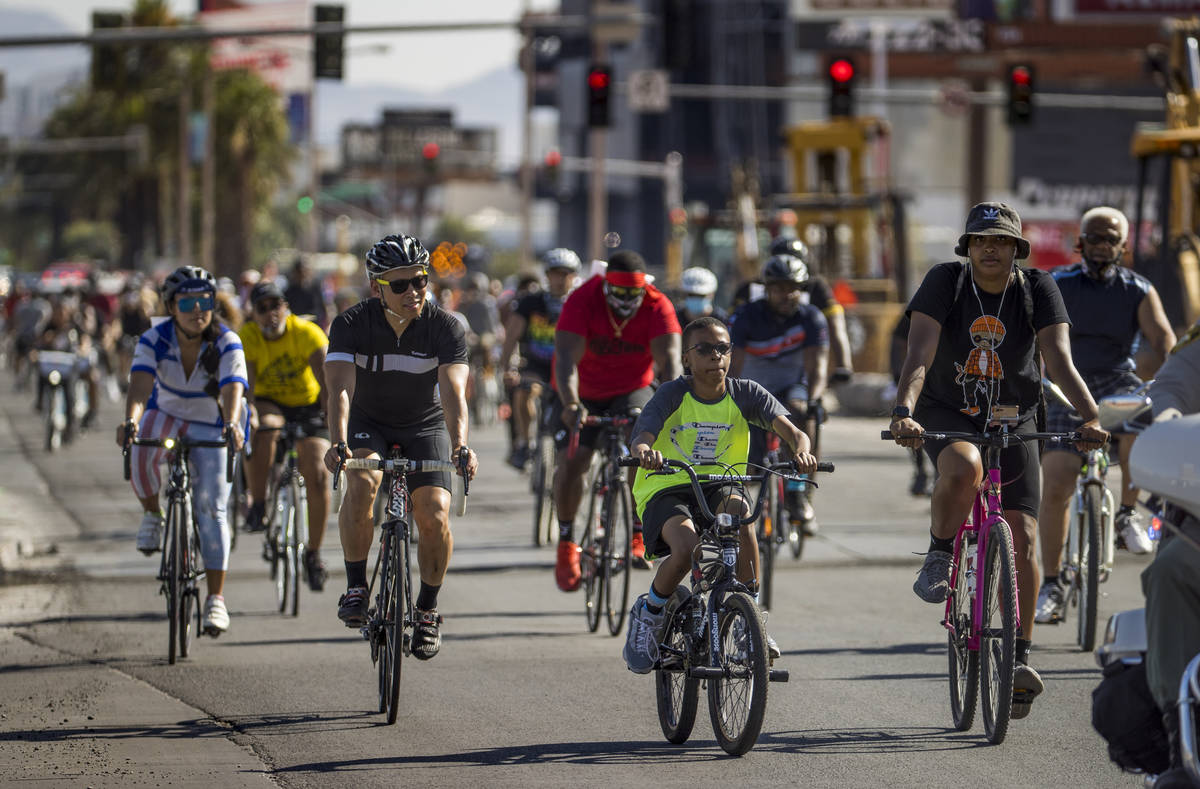 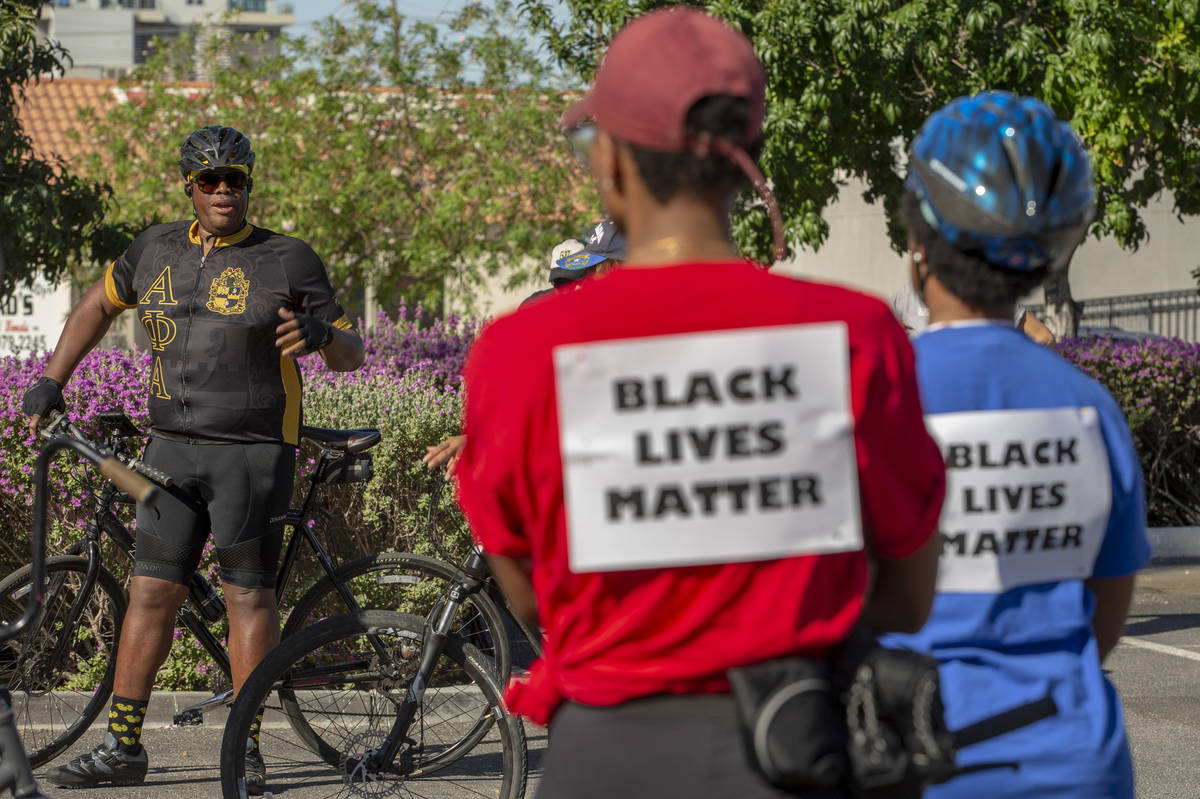 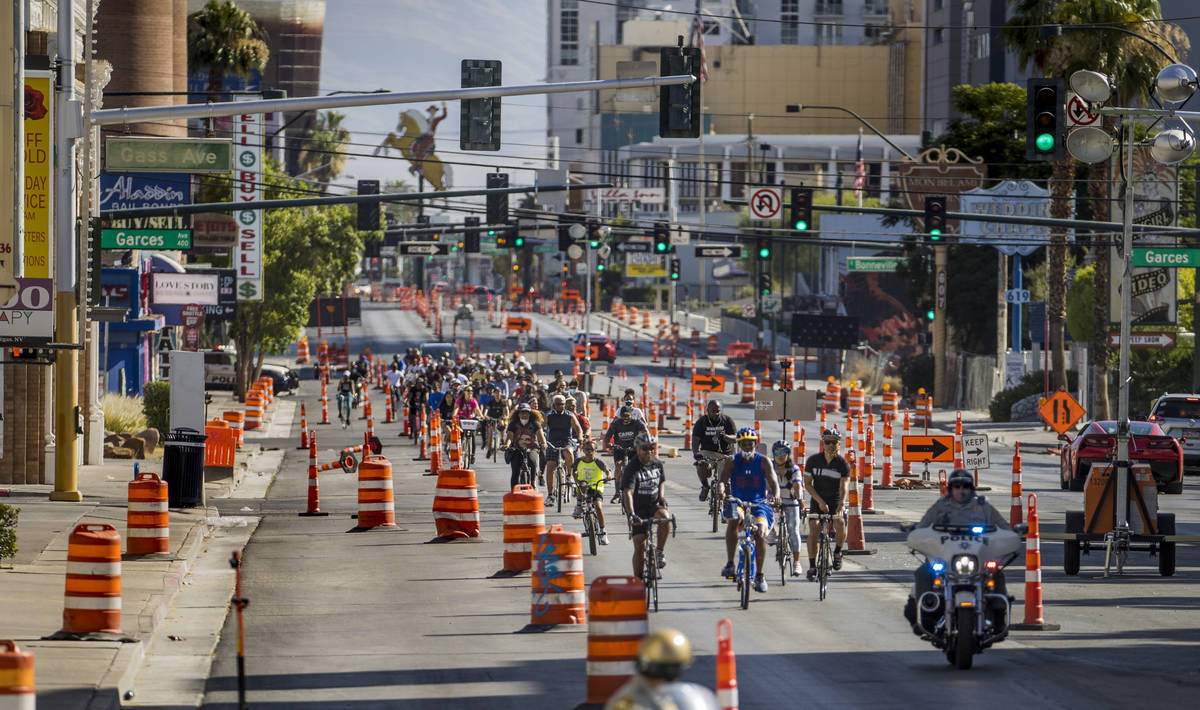 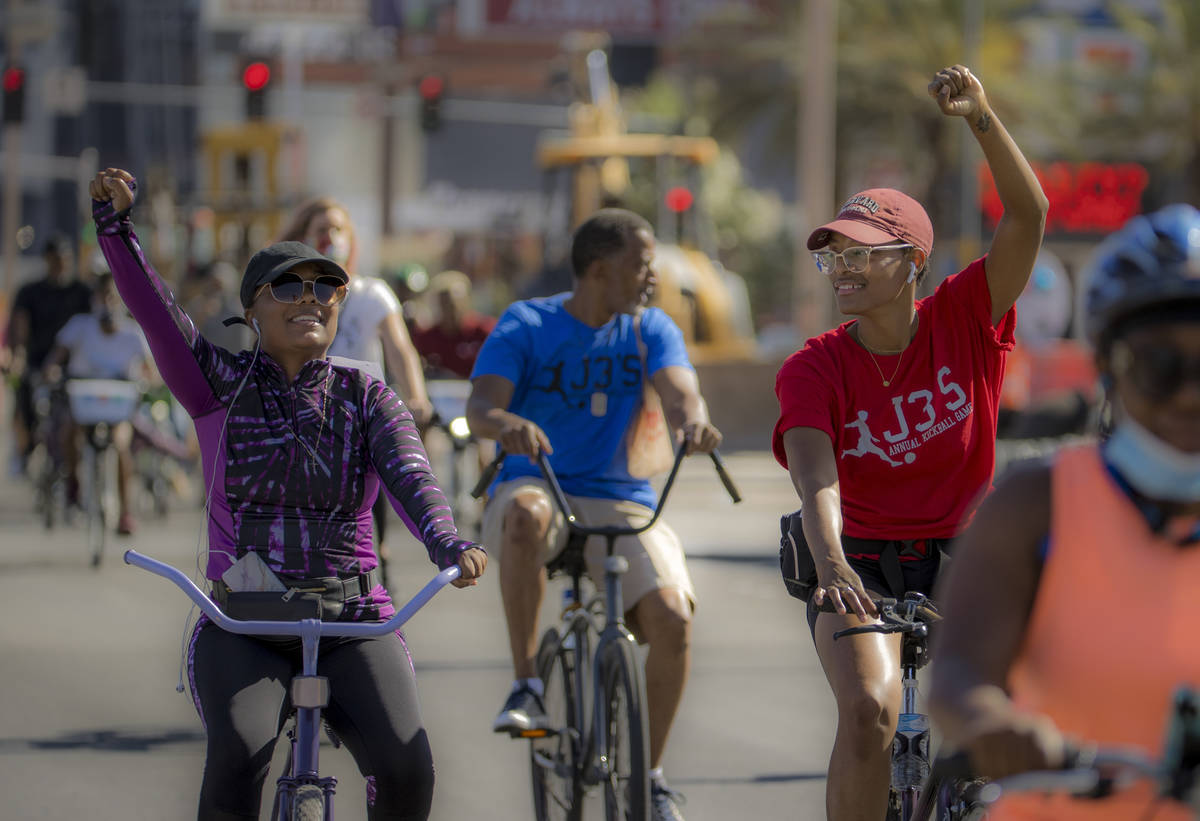 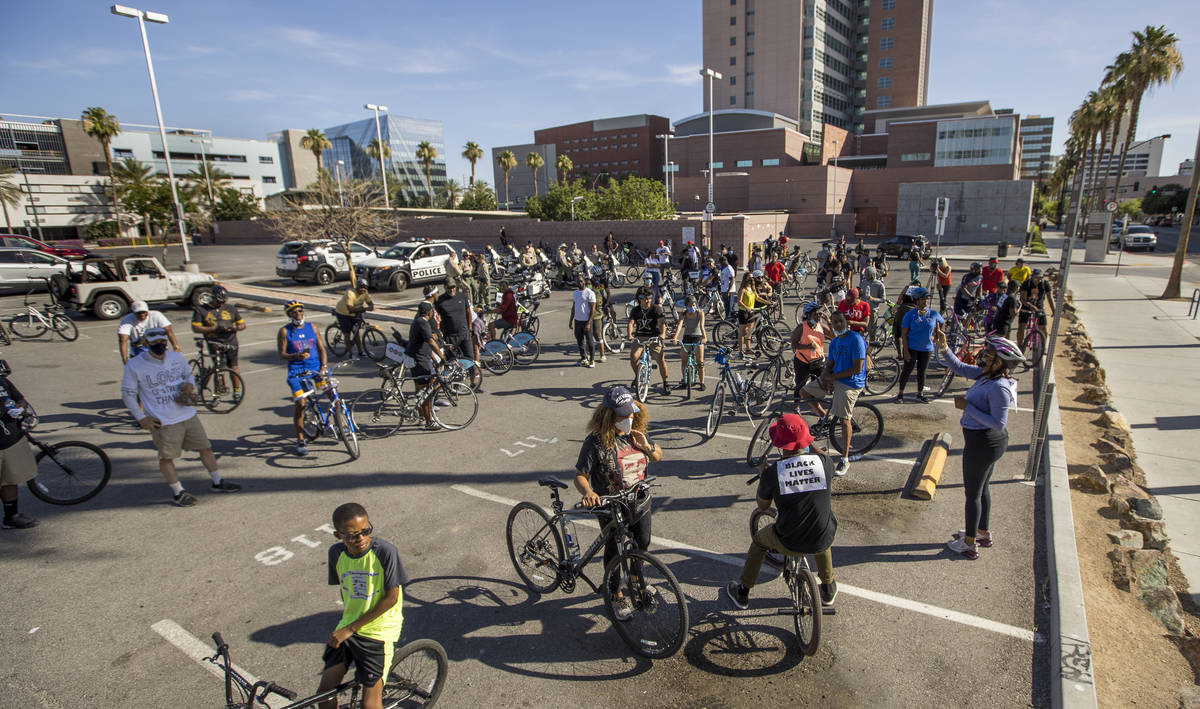 Participants in a Black Lives Matter bike ride against injustice gather in a parking lot off of E. Clark Ave. as they ready for a ride down the Las Vegas Strip led by Las Vegas Councilman Cedric Crear and former NBA player CJ Watson on Saturday, June 20, 2020, in Las Vegas. (L.E. Baskow/Las Vegas Review-Journal) @Left_Eye_Images 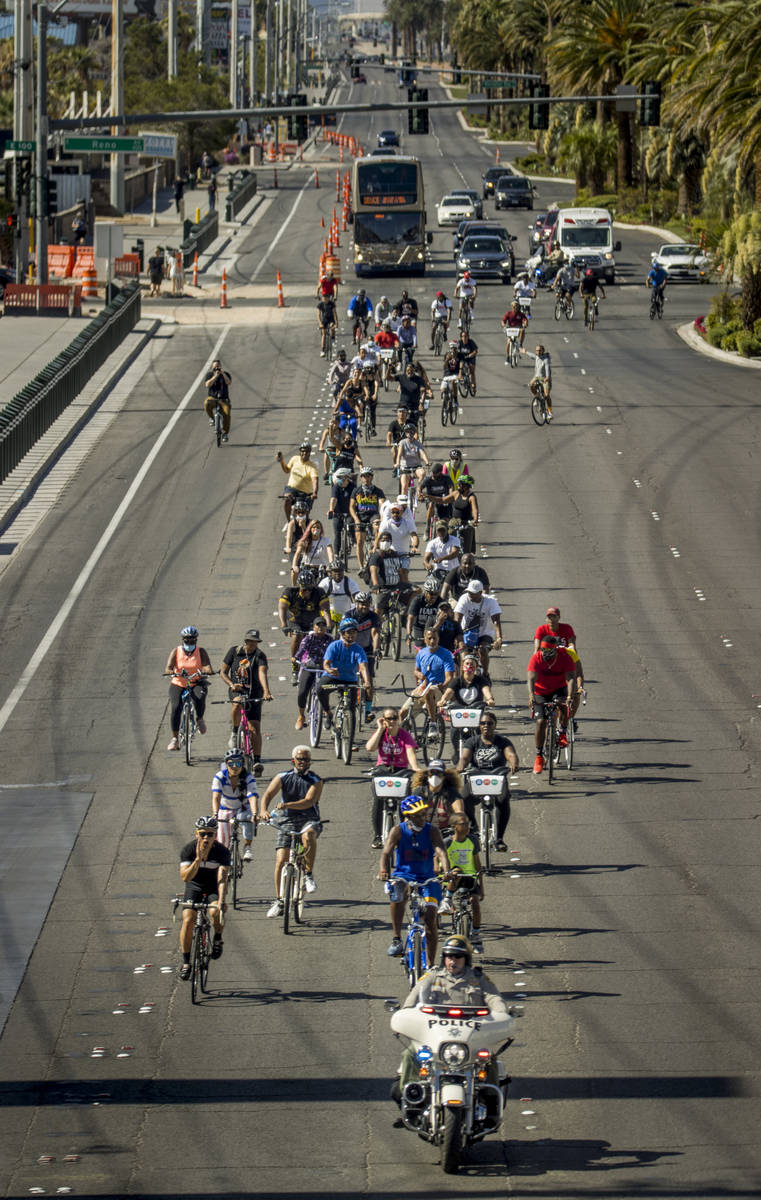 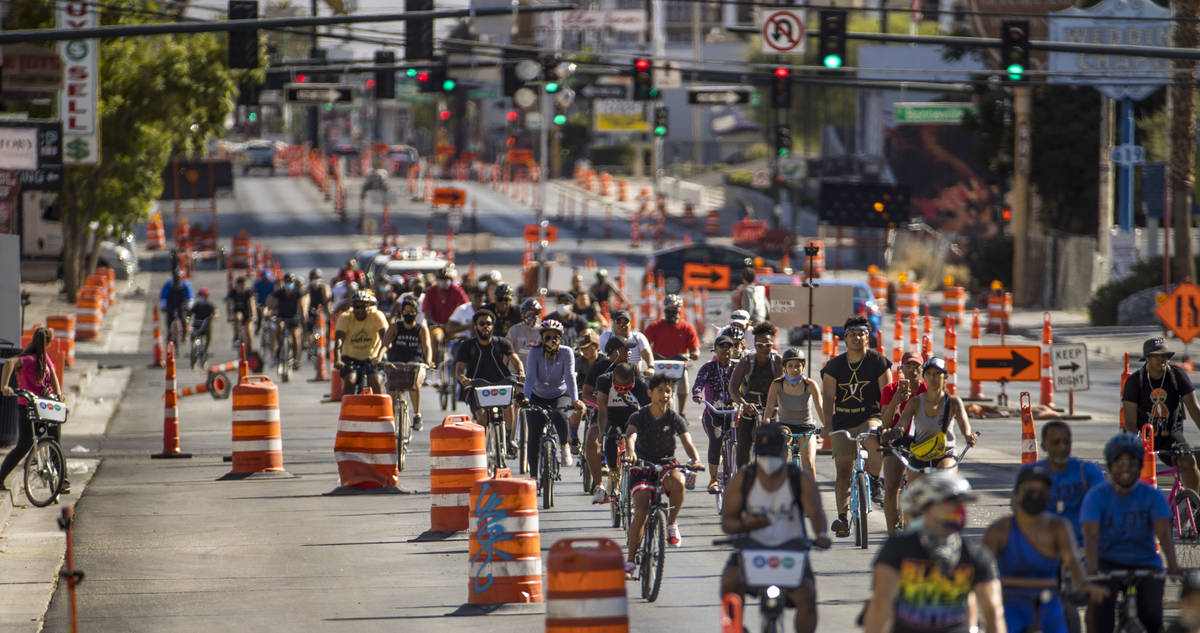 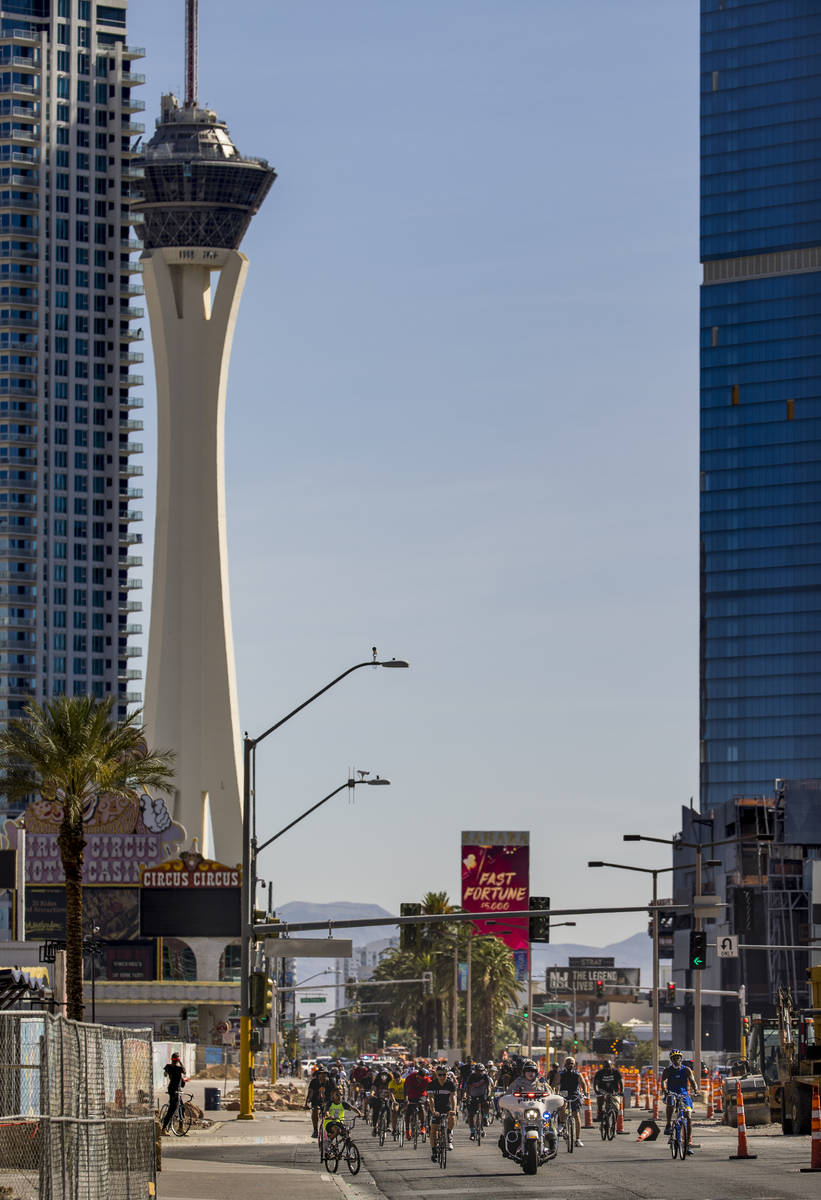 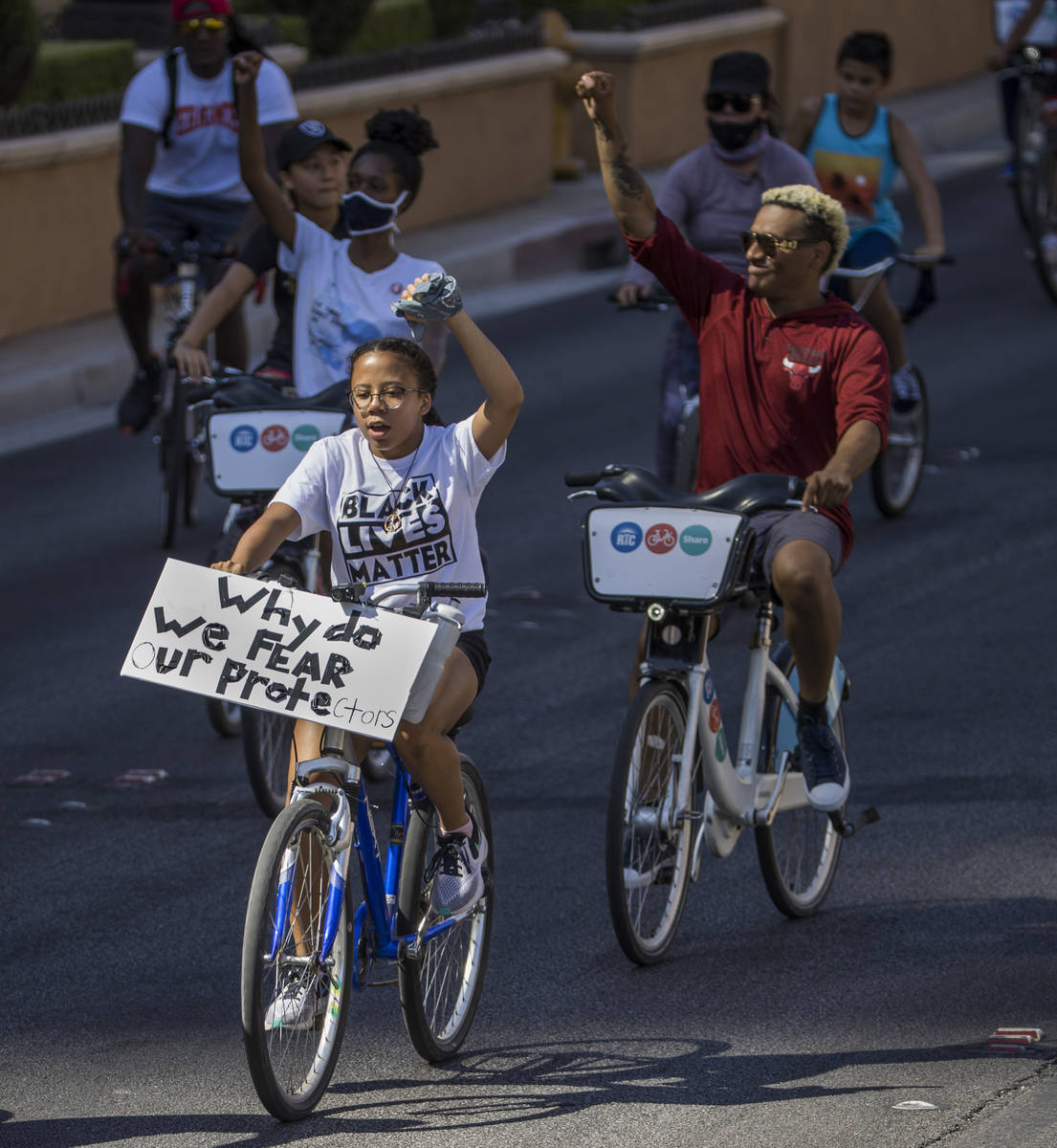 Participants in a Black Lives Matter bike ride against injustice show their support while passing The Palazzo while heading back up the Las Vegas Strip with a police escort led by Las Vegas Councilman Cedric Crear and former NBA player CJ Watson on Saturday, June 20, 2020, in Las Vegas. (L.E. Baskow/Las Vegas Review-Journal) @Left_Eye_Images 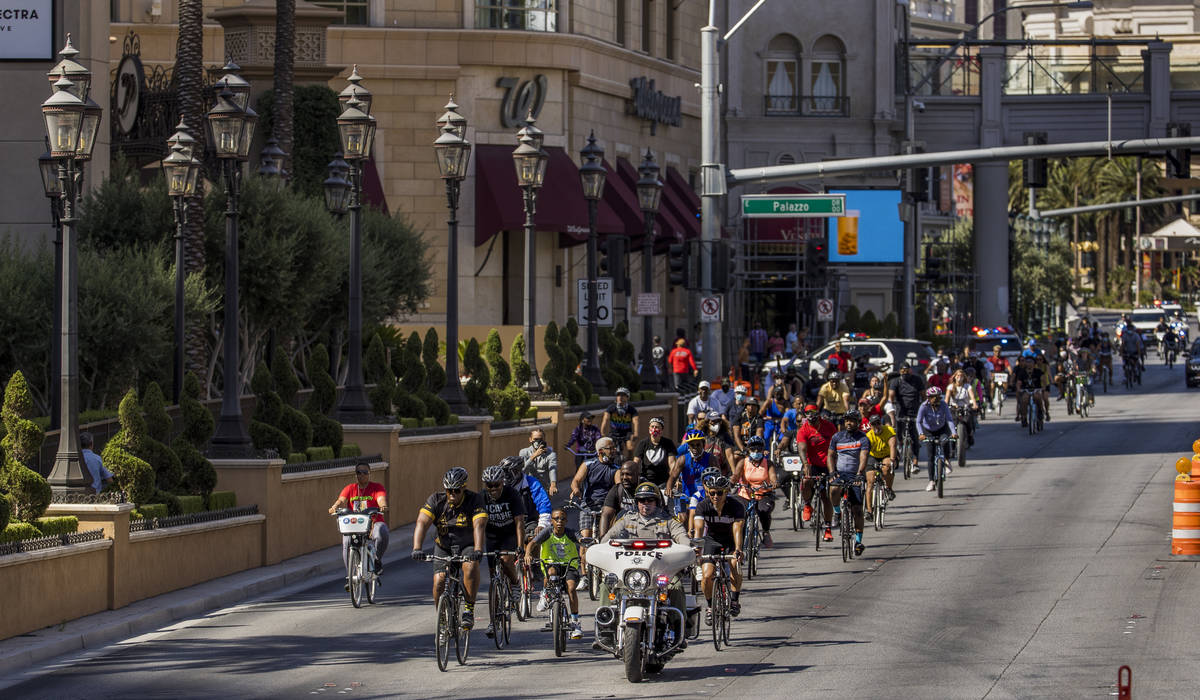 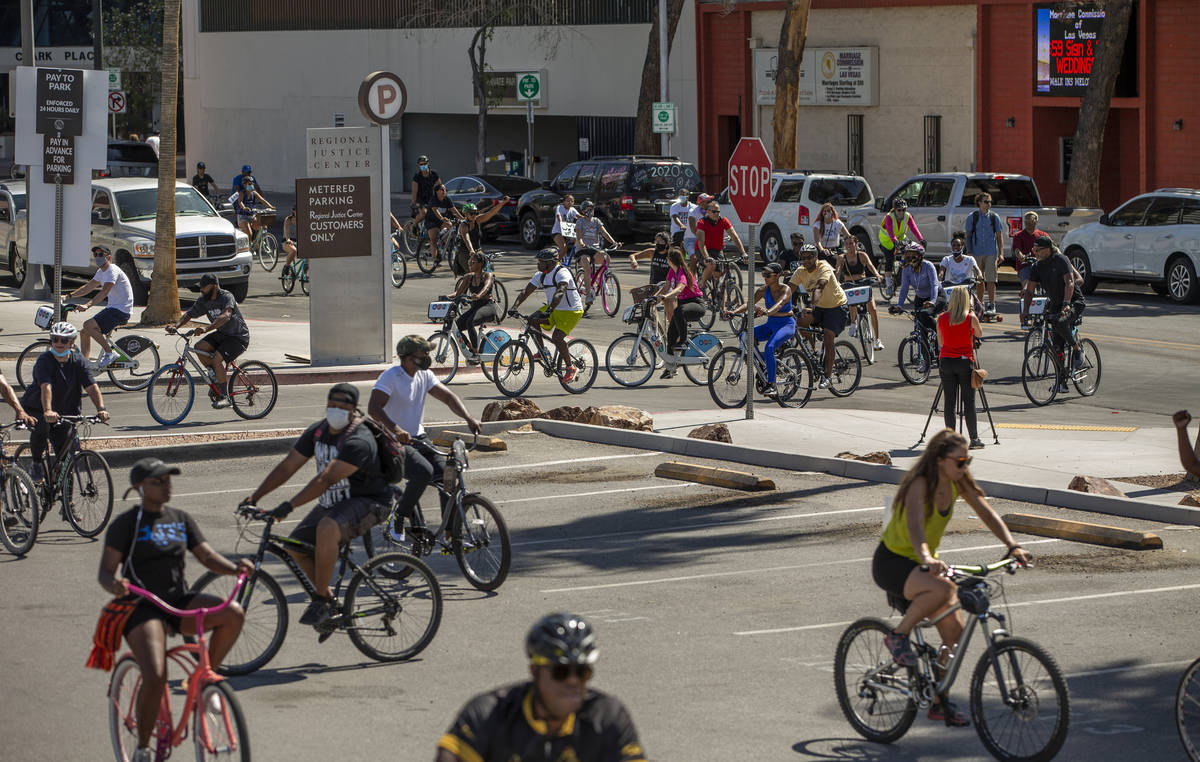 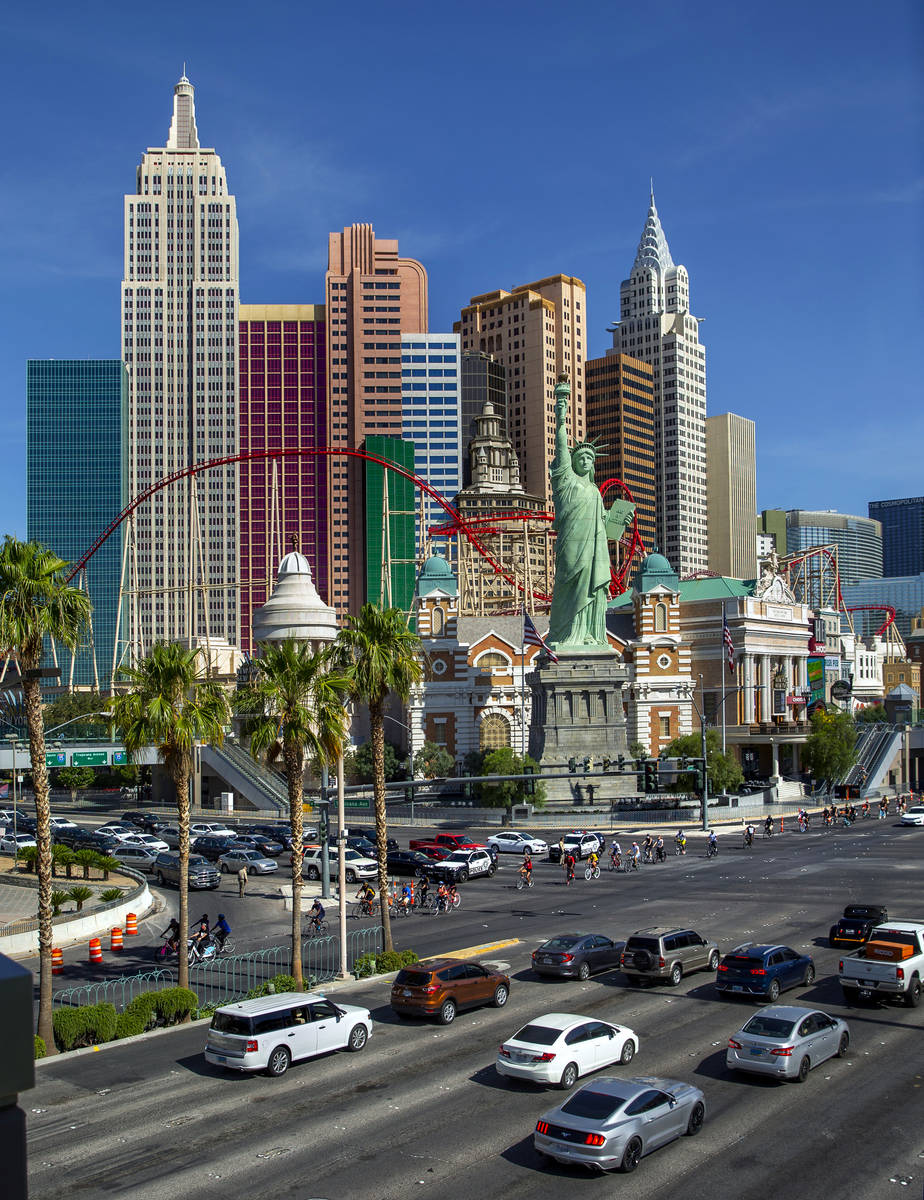 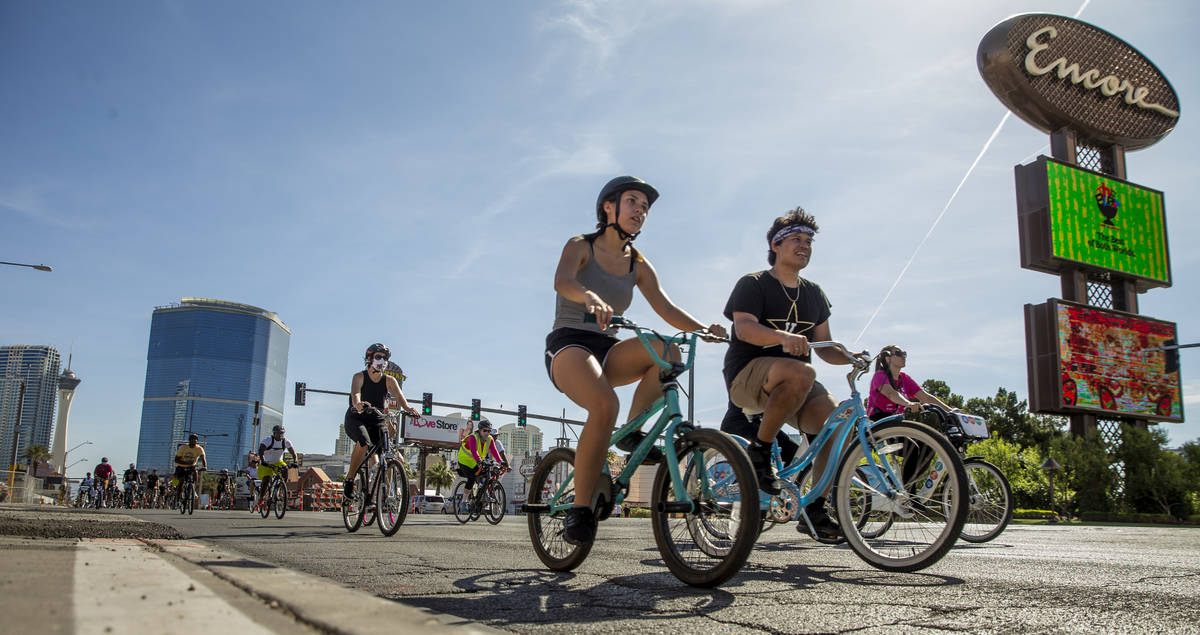 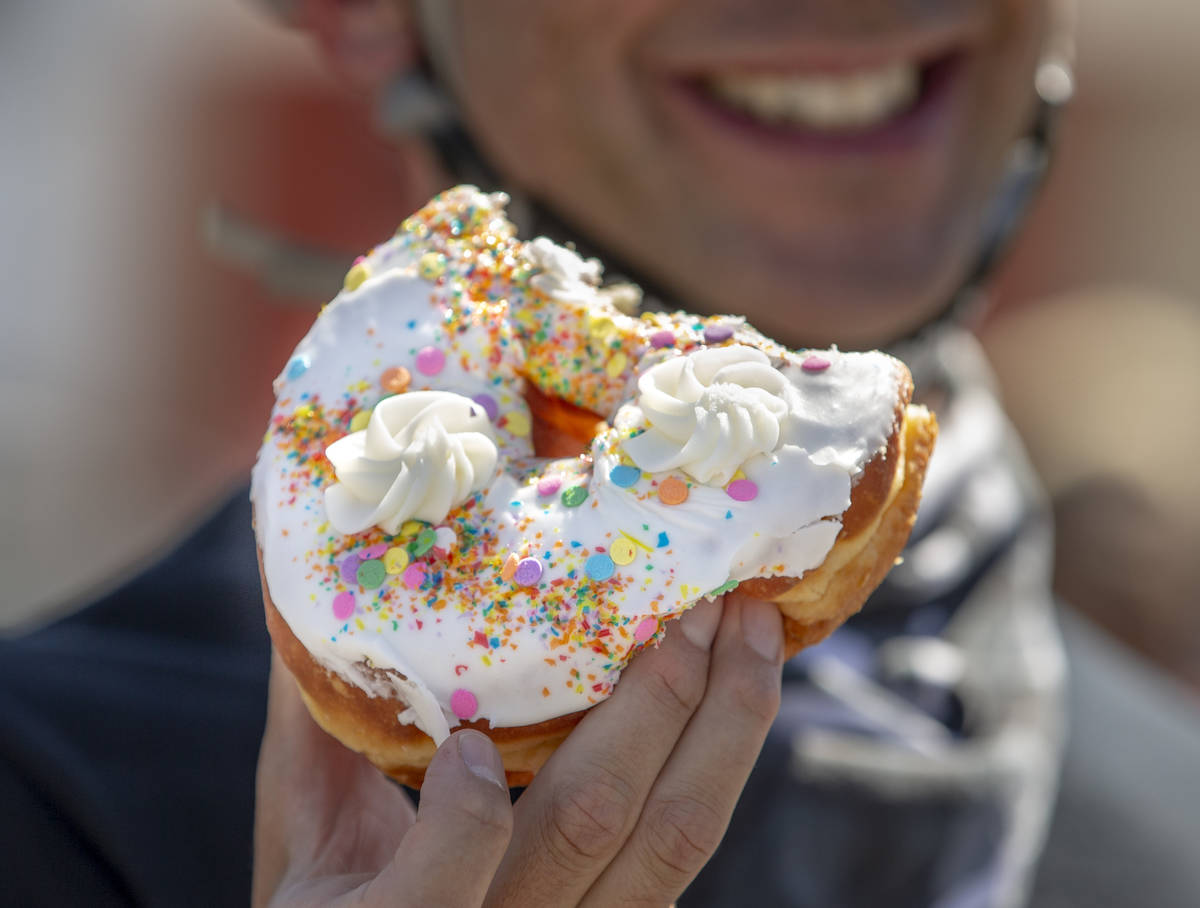 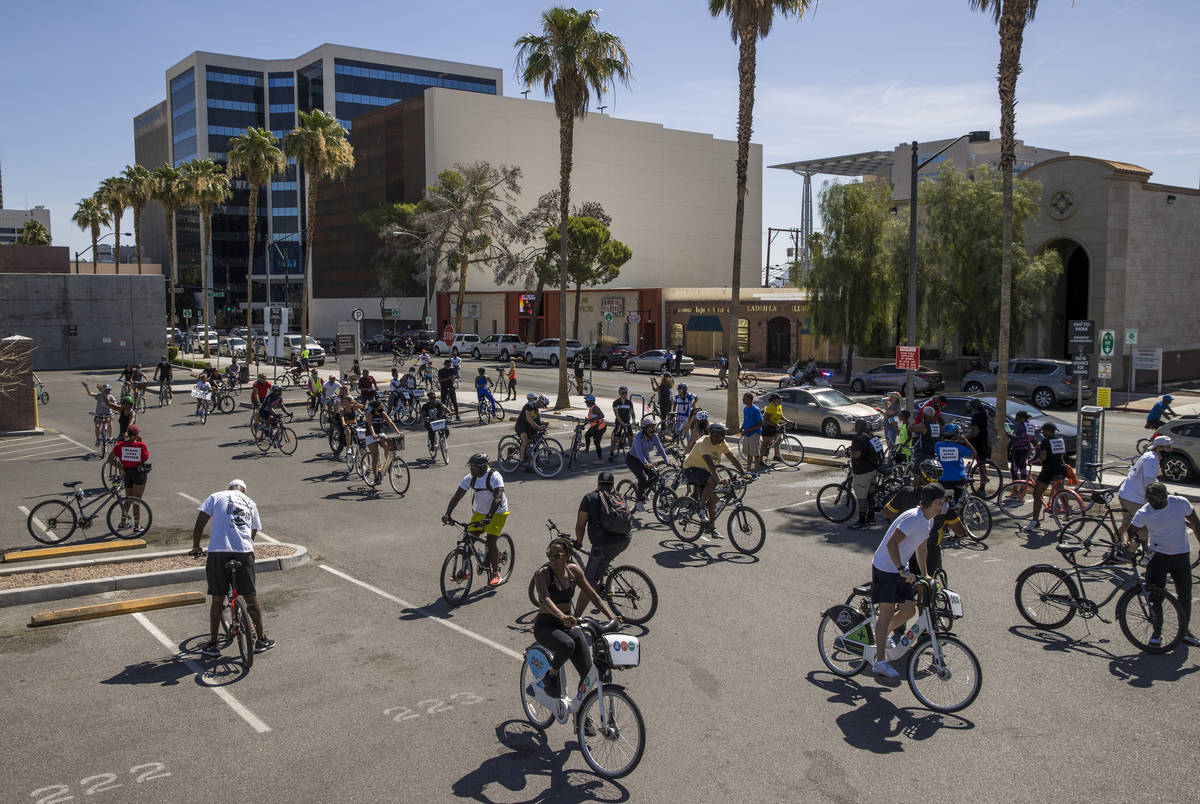 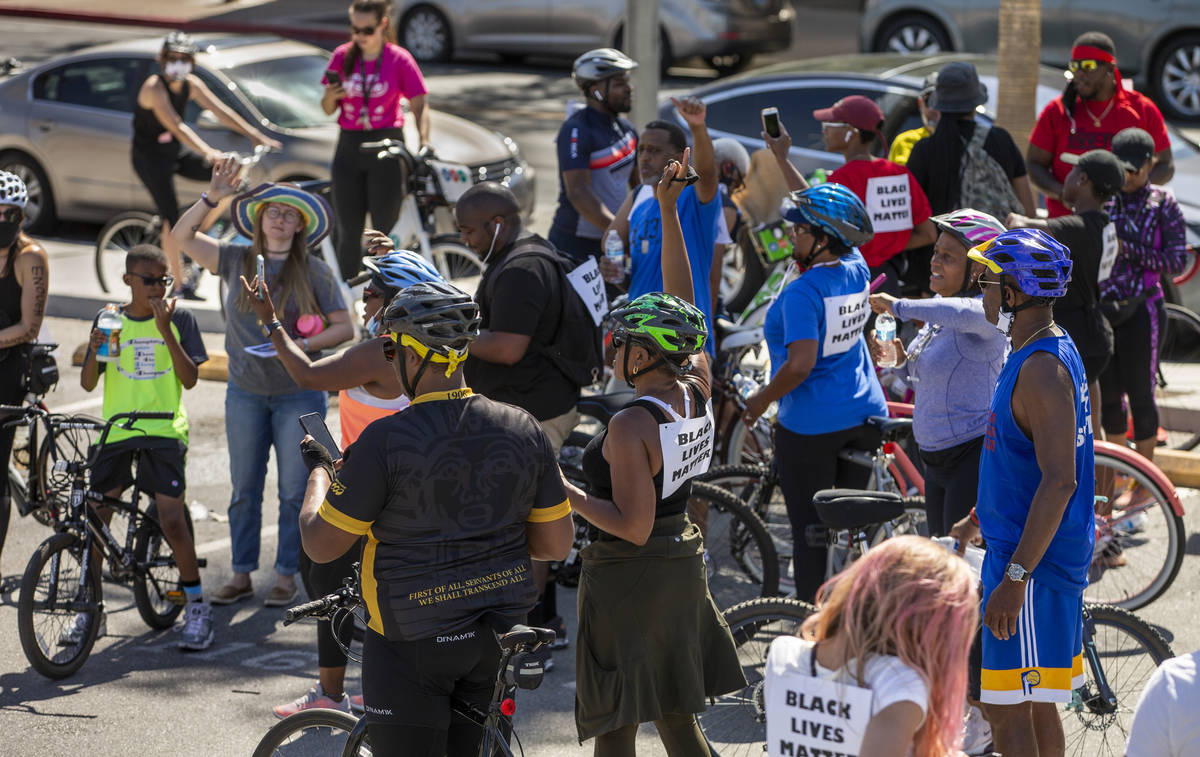 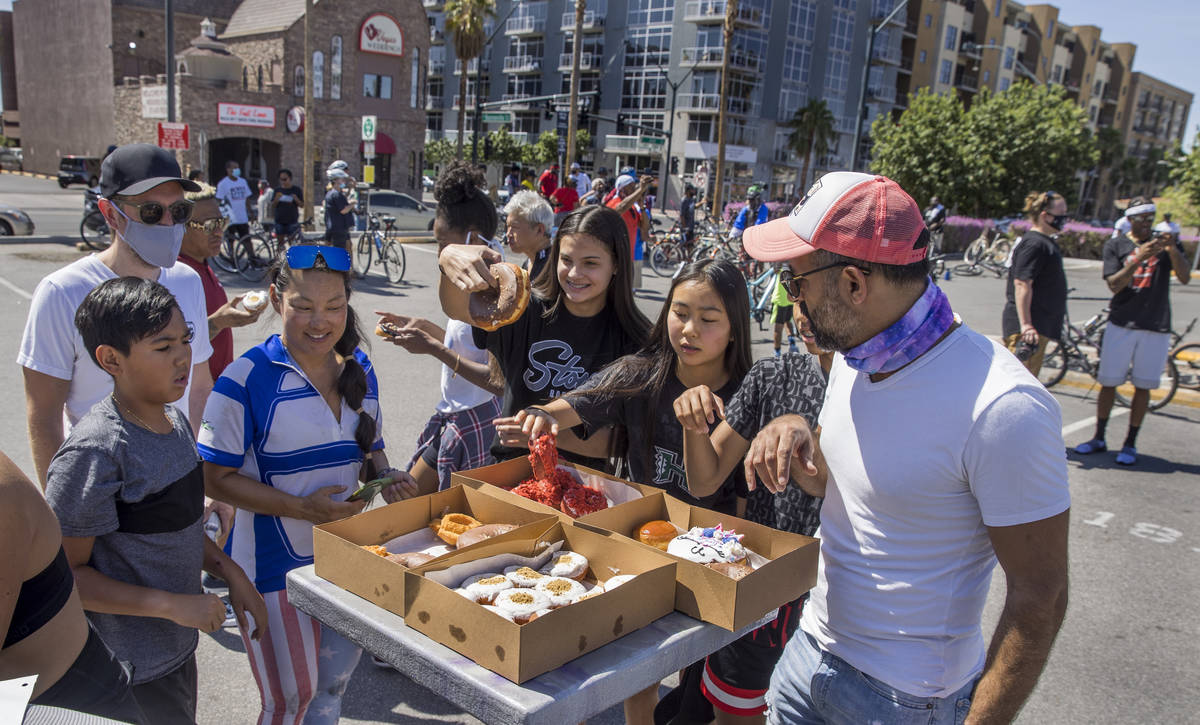 About 100 people, some with “Black Lives Matter” signs stuck to their backs, rode bikes down the Strip on Saturday morning in one of the latest anti-racism protests held in the Las Vegas Valley since late May.

C.J. Watson, a former NBA player, said he helped organize the bike-ride demonstration through his Quiet Storm foundation that works with children. The crowd of cyclists gathered on Saturday morning near Clark Avenue and Las Vegas Boulevard before riding down the Strip to Mandalay Bay and back.

The ride was the first of two protest events on Saturday.

In the early afternoon, a small group of protesters gathered outside of the Lloyd George Federal Courthouse to call for economic equality and support the Black Lives Matter movement.

Organizer and Las Vegas activist Henry Thorns said that protest centered on a call for reparations for slavery and funds to be allocated toward Black communities. He added the protest also supported the Black Lives Matter movement to denounce police brutality after the death of George Floyd in Minneapolis police custody.

The morning cyclists’ ride was escorted by Metropolitan Police Department officers in cars and on motorcycles, and the bike riders took group pictures with the police afterward. The protesters had no clashes with police, unlike Friday night, when officers detained some marchers on the Strip toward the end of a Juneteenth rally.

It remained unclear Saturday morning what charges, if any, those detained might face.

Standing next to a turquoise bike rented from a Regional Transportation Station, 33-year-old Precious Perry showed off two cardboard signs she made for Saturday’s protest. One side of the sign referenced her 5-year-old son, and read, “When do I go from cute to dangerous?”

“We need a change, and the only way to make a change is to stick together,” she said.

Watson, who said he was born and raised in Las Vegas, said he got the idea for the bike ride from a protest held in Los Angeles. He said he wanted to “do something peaceful” to advocate for change.

“It’s a tough time in America right now,” he said.

Las Vegas City Councilman Cedric Crear also showed up to ride with the bicyclists. Crear’s district includes the Historic Westside neighborhood of Las Vegas, and he spoke during an anti-racism rally held in the neighborhood earlier this month.

Crear said the protests in Las Vegas are an “expression of people’s frustration.”

“This is a peaceful and powerful way to express that,” he said about the Saturday morning bike ride.

On Saturday morning, Kobe Armstrong prepared to ride his bicycle alongside his mother. The 23-year-old pinned a piece of paper reading, “Black Lives Matter,” onto his backpack.

“We got to be here for our people,” he said, later adding, “I think we need more protests, if anything.”