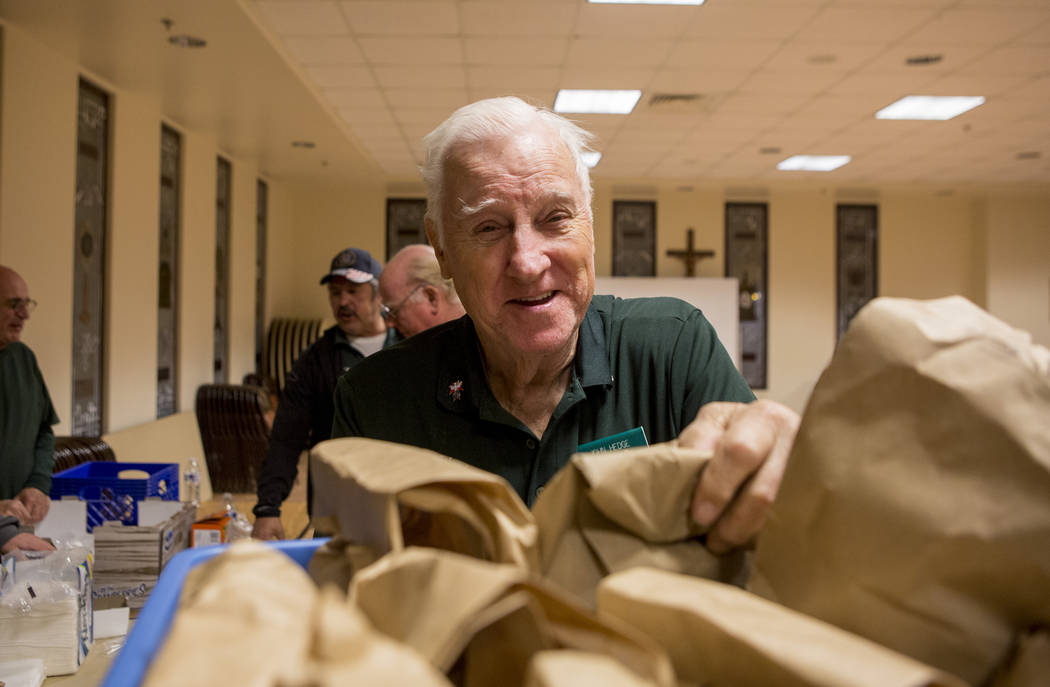 Knights Of Columbus councilmen John Hedge packs dinners at Our Lady of Las Vegas to be given out to individuals in need in Las Vegas, Monday, Nov. 20, 2017. Elizabeth Brumley Las Vegas Review-Journal @EliPagePhoto 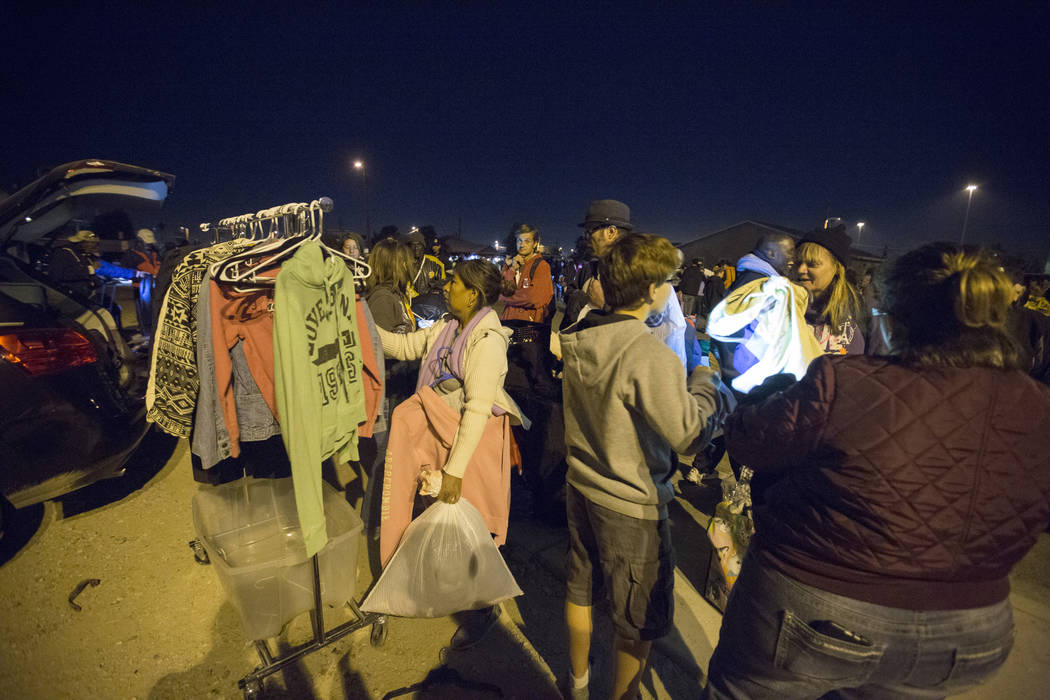 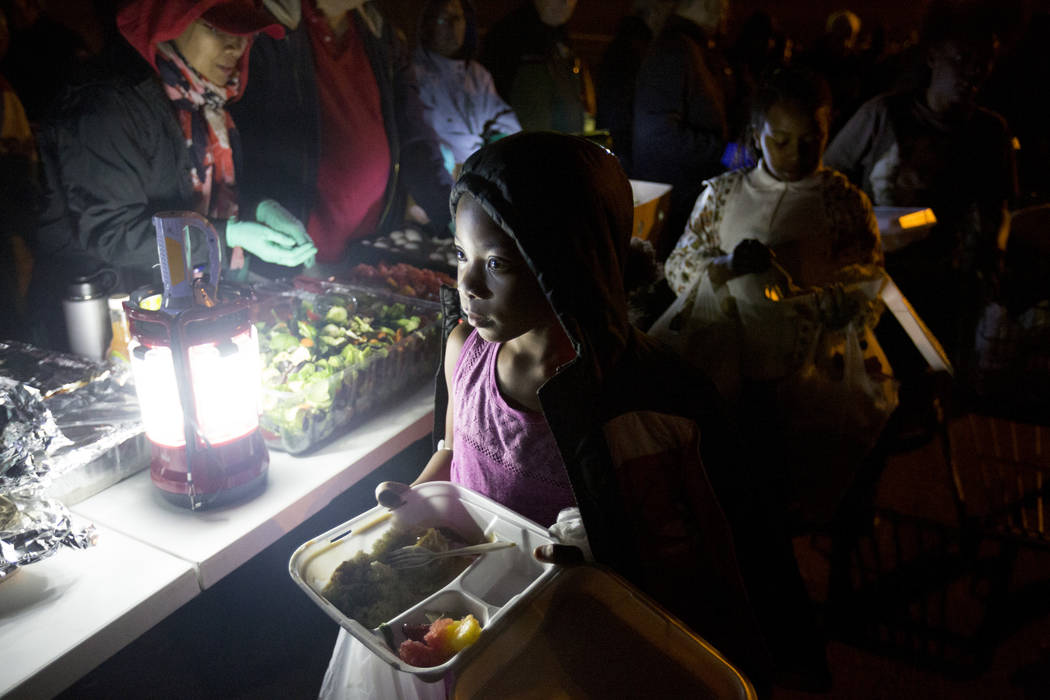 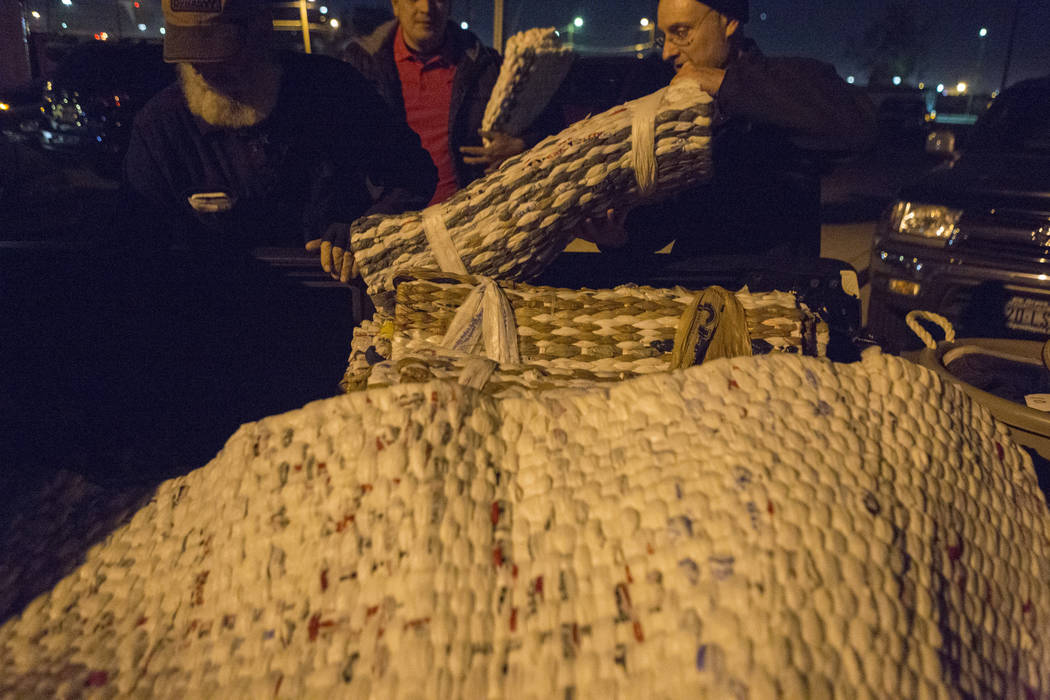 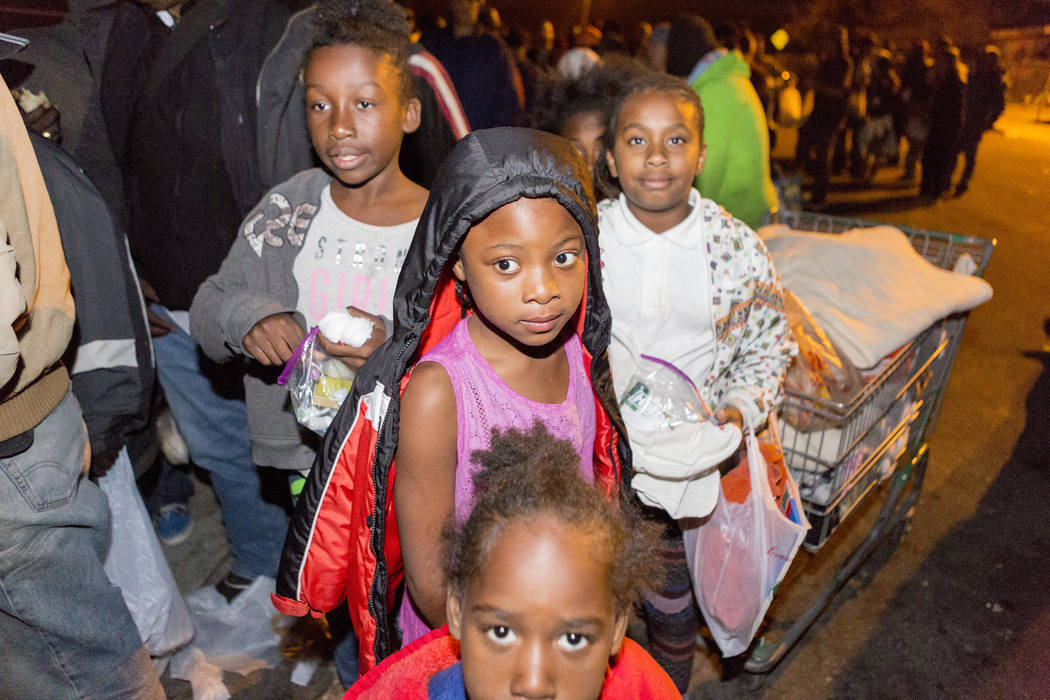 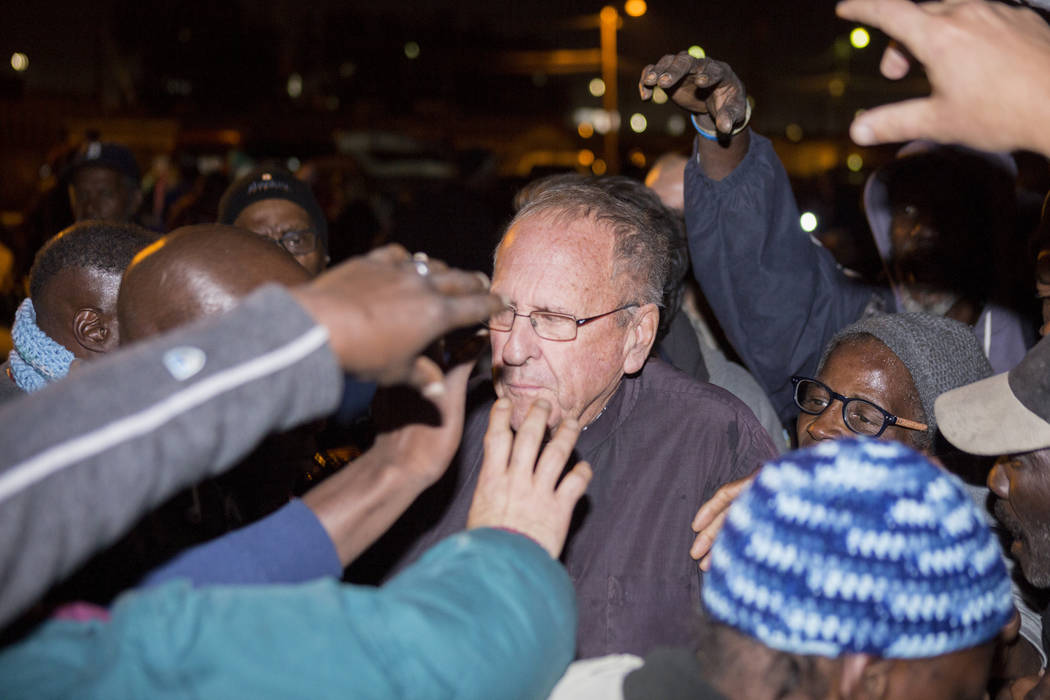 Individuals crowd Father John McShane from Ely Nevada while he gives out buss passes off of H Street and Bonanza Road in Las Vegas, Monday, Nov. 20, 2017. Father McShane has come to this location to distribute goods almost every Monday for the past 17 years. Elizabeth Brumley Las Vegas Review-Journal @EliPagePhoto 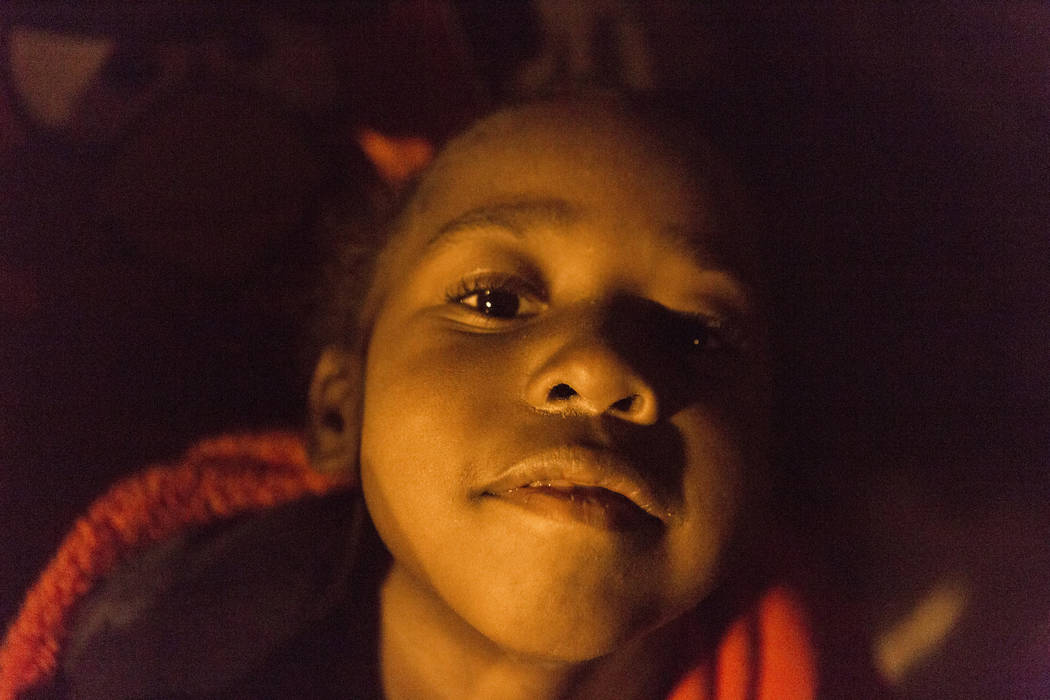 Aalayasia Johnson, 5, waits in line to get winter coats and food with her siblings and cousins off of H Street and Bonanza Road in Las Vegas, Monday, Nov. 20, 2017. Elizabeth Brumley Las Vegas Review-Journal @EliPagePhoto 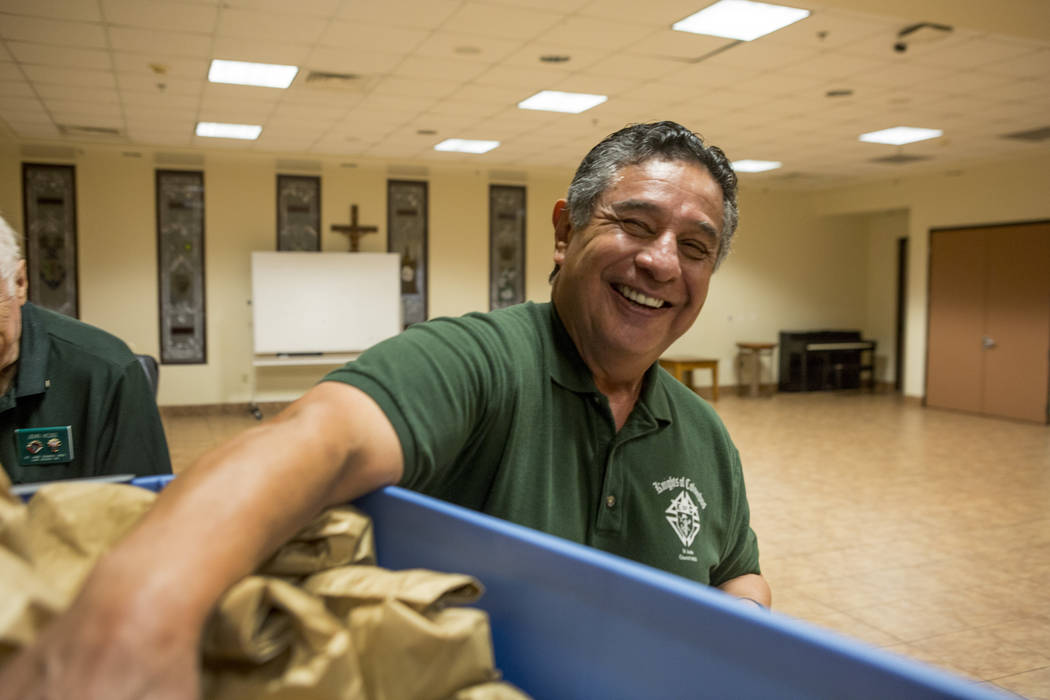 Knights Of Columbus councilmen Joe Suarez packs dinners at Our Lady of Las Vegas to be given out to individuals in need in Las Vegas, Monday, Nov. 20, 2017. Elizabeth Brumley Las Vegas Review-Journal @EliPagePhoto 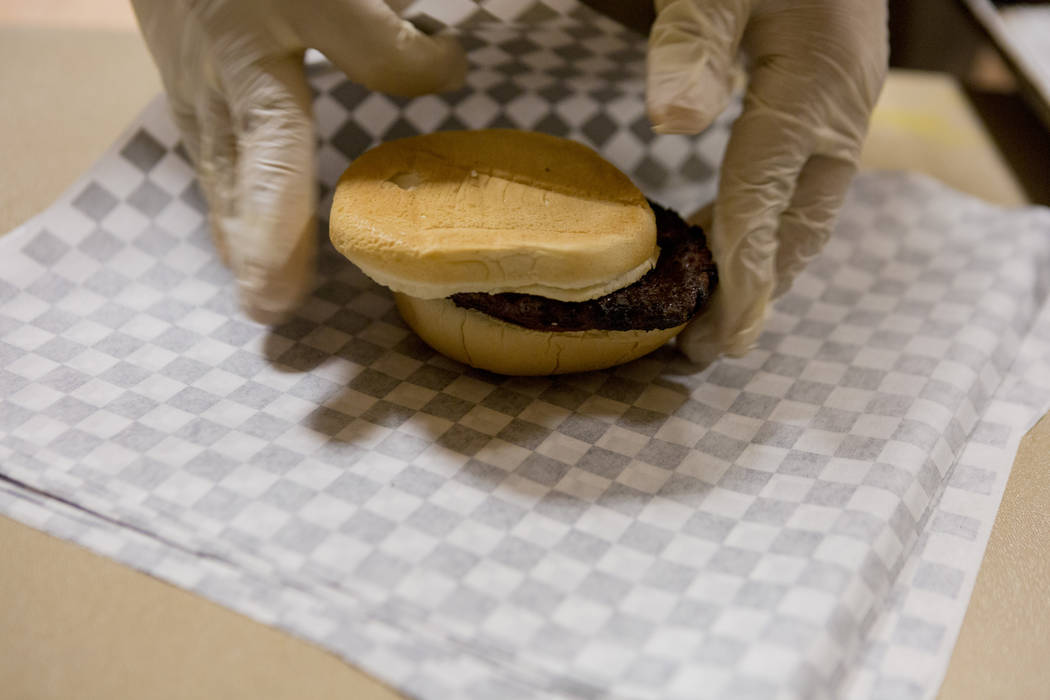 Knights Of Columbus councilmen wraps a hamburger at Our Lady of Las Vegas to be given out to individuals in need in Las Vegas, Monday, Nov. 20, 2017. Elizabeth Brumley Las Vegas Review-Journal @EliPagePhoto 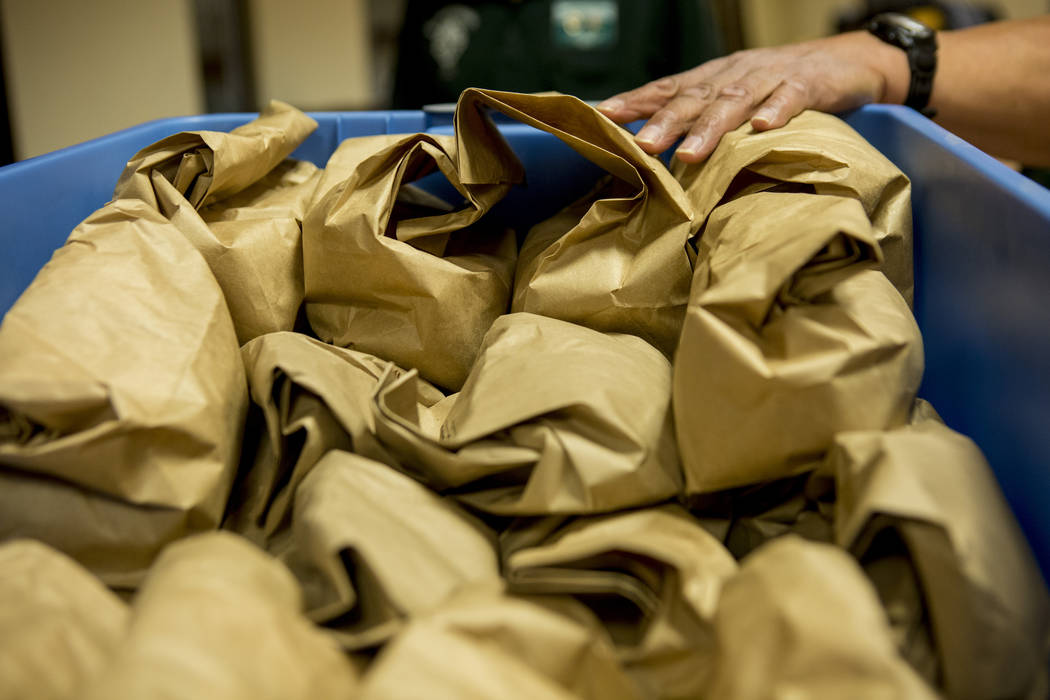 Packed dinners are ready to be distributed by Knights Of Columbus councilmen to individuals in need in Las Vegas, at Our Lady of Las Vegas, Monday, Nov. 20, 2017. Elizabeth Brumley Las Vegas Review-Journal @EliPagePhoto 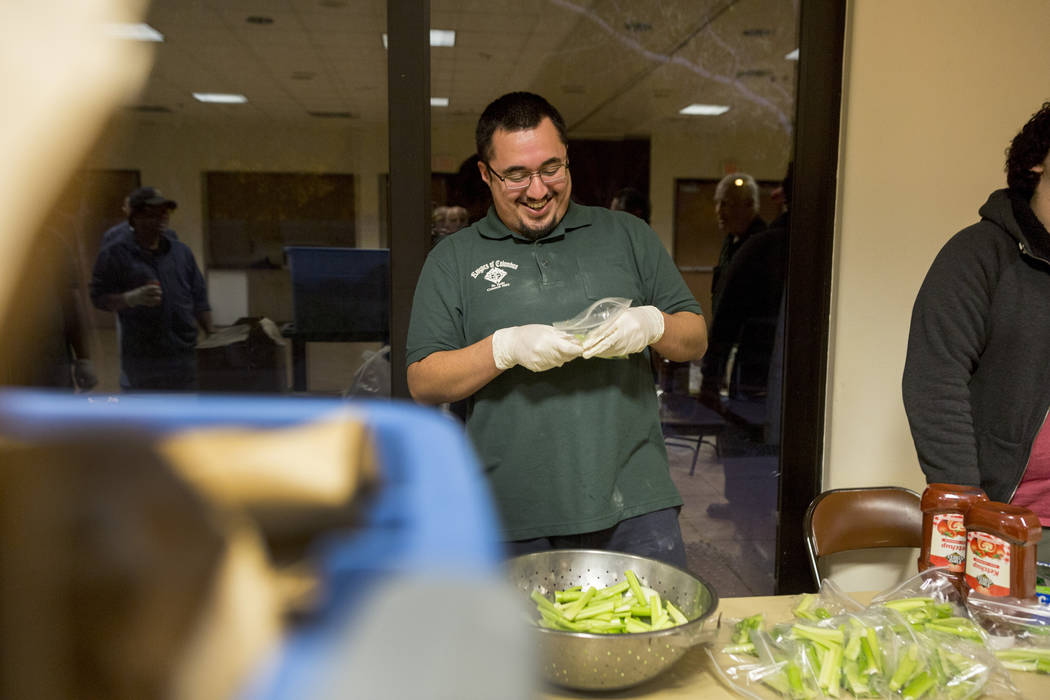 Knights Of Columbus councilmen Miguel Rosales packs dinners at Our Lady of Las Vegas to be given out to individuals in need in Las Vegas, Monday, Nov. 20, 2017. Elizabeth Brumley Las Vegas Review-Journal @EliPagePhoto 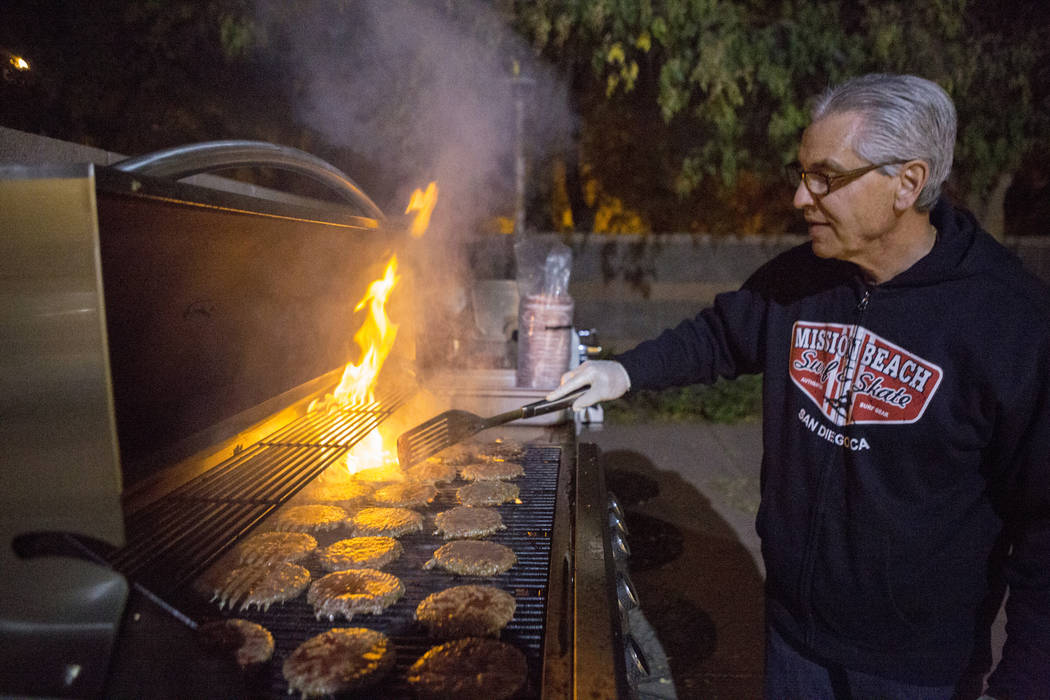 Knights Of Columbus councilmen Tony Vito grills burgers at Our Lady of Las Vegas to be given out to individuals in need in Las Vegas, Monday, Nov. 20, 2017. Elizabeth Brumley Las Vegas Review-Journal @EliPagePhoto

Smoke from the grill behind Bevan Hall on Alta Drive dissipated into the crisp, fall air. Bernie Iwasczyszyn leaned over the flames. He flipped the hamburgers and hot dogs and closed the lid.

“It’s nice to get some fresh air,” Iwasczyszyn said of Monday night’s weather, which would have temperatures in the 40s. “This is the coldest day right now, the summer is one thing. Imagine being homeless in this.”

Iwasczyszyn, a Las Vegas resident, is deputy grand knight of the Knights of Columbus Council, a 200-member Catholic-based men’s organization engaged in charity. He and about 14 other members prepared to make around 300 hamburgers and hot dogs at their church, Our Lady of Las Vegas, and bring them to feed homeless people in downtown Las Vegas as part of Giving Back Mondays.

Father John McShane started Giving Back Mondays, now in its 18th year, when he was at Catholic Charities, to help the valley’s hungry. Although he is not involved with Our Lady of Las Vegas, he still participates in the events, as do many local churches and charities.

On Monday, Miguel Rosales dressed the meals, funded by donations, money the council has raised or leftover meals from church functions, in checkered wrapping. The brown bags were also equipped with celery sticks, pretzels and hard-boiled eggs.

The lunches, which are handed out off Bonanza Road, are designed to be eaten the next day, said Tom Villardi, the council’s grand knight. The 64-year-old with a gray mustache walked around Monday, helping prepare meals.

“On the coldest night, you feel very warm,” he said of giving back.

Before the men went to hand out lunches, Villardi briefed them to ensure they helped the most people. Extra lunches are given to families with children, he said. It’s hard to say when some of them have eaten last.

“After you’ve seen it, and done it, you’re drawn to it again,” he said of handing out the meals. “This is guerrilla-style work.”

At the intersection of G Street and McWilliams Avenue, people gathered by the hundreds, bundled in jackets and blankets, waiting for McShane to bless their food.

By 7:30 p.m., he had pulled up in his silver Honda Civic. McShane, who lives in Ely, still comes every Giving Back Monday, handing out gift cards and needed items. Once a month, he does a sermon on the street.

“The people that we meet on the streets, there’s no difference,” said McShane, sporting rectangular-framed glasses and clad in a black clerical collar. “It’s all us.”

Organizations set up their tables to distribute food, some with a Thanksgiving theme. Some groups also had blankets, sweaters, hot chocolate and diapers.

“This is a pop-up potluck to serve our friends on the street,” said Vivian Wright, from the New Vista Ranch, a group serving people with disabilities.

The Knights of Columbus table was the first stop for many visitors. Aalaya Johnson, 11 and Aalayasia Johnson, 5, waited with a group of siblings and cousins. Their hands were full of bags from the giveaways.

Juggling so many donations in her tiny hands, Aalayasia dropped a bottle of water. Seanelle Moore, 25, bent over to retrieve it.

Moore lives in a tent underneath the bridge on Bonanza Road. She has four kids. As volunteers filled her box up with macaroni and cheese, noodles and turkey, she grabbed a sack lunch from the Knights of Columbus table and stowed it in her grocery cart.

Her therapy dog, Diamond, a gray pit bull, nestled under blankets in the cart.

Moore, who has been homeless for three years, said the food she and her boyfriend get on Mondays lasts almost a week. Whatever she doesn’t eat, Diamond gets.

Maria Flores, 41, and her husband, Samuel Jones, also waited in line, bundled in black jackets and beanies. Jones is on disability and Flores was laid off eight months ago.

As they waited in line, the couple talked to Gene Hedge, a 26-year Army veteran who has been part of the council for a little over a year. Hedge’s twin brother, John, is also part of the council and serves as chairman of the outreach program. They’re about to be 81.

“We know what it’s like to be hungry,” he told them. “We had to go to school with a lot of nothing.”

Growing up in Coney Island, New York, the white-haired brothers sometimes had to fit cardboard or linoleum in the bottom of their shoes to cover up the holes, he said. Many of their clothes came from charity.

Jones said he thanks God for the opportunity to be provided food for him and his wife. He’s been coming almost every Monday since the beginning.

“People don’t have to do this,” he said. “They could be at home, sitting with their families with what they’ve got.”

The next Monday, the council would hand out meat from 10 turkeys. And bread pudding.