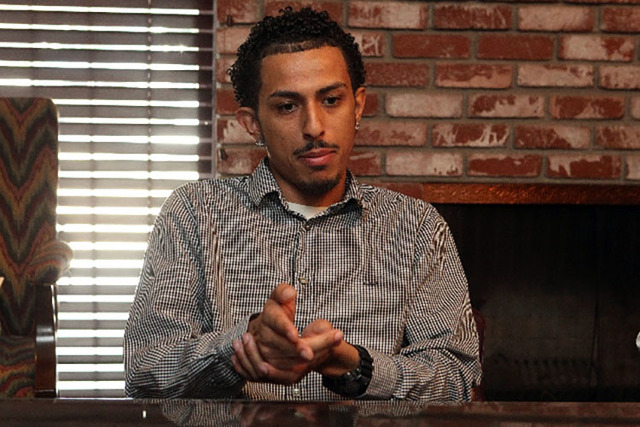 Lawrence Gordon, at attorney Cal Potter's office on Wednesday, shows how a Las Vegas police officer fired his pistol at him in November, wounding him in the leg.

The Metropolitan Police Committee on Fiscal Affairs on Monday approved a $400,000 settlement for a man who was shot by a Las Vegas police officer in 2012.

Lawrence Gordon was shot in the right leg by Metro officer Jacquar Roston on the night of Nov. 11, 2012.

The shooting was controversial for the department, and Lawrence filed a federal civil rights lawsuit against Metro in June 2013.

Gordon was represented by Las Vegas attorney Cal Potter and said in court documents that a metal rod and eight bolts were inserted in his right leg as a result of the shooting. He said he suffered excruciating pain and permanent physical impairment.

The lawsuit also alleged that the department deprived Gordon of his rights by not properly investigating or documenting the incident.

Gordon was unarmed when he was shot. Roston apparently mistook the shine from a label on Gordon’s hat for a weapon.

Gordon has said that he and his girlfriend were arguing in a car in a parking lot, where Roston was digging through his patrol car’s trunk, apparently unaware of the couple.

His girlfriend got out of the car and spoke to Roston for several minutes as Gordon waited in the passenger seat.

Roston eventually approached and said, “Why you moving?” Gordon said. Within five seconds of confronting Gordon, the officer drew his weapon and fired a shot, all in a single motion.

The department’s Use of Force Board, which was tasked with reviewing police shootings to determine whether policies were followed, recommended that Roston be fired. Former Sheriff Doug Gillespie ignored that recommendation, the result of a unanimous vote, and suspended the officer for a week instead.

Six civilian members of the board resigned, and an assistant sheriff working with the board retired following Gillespie’s decision.