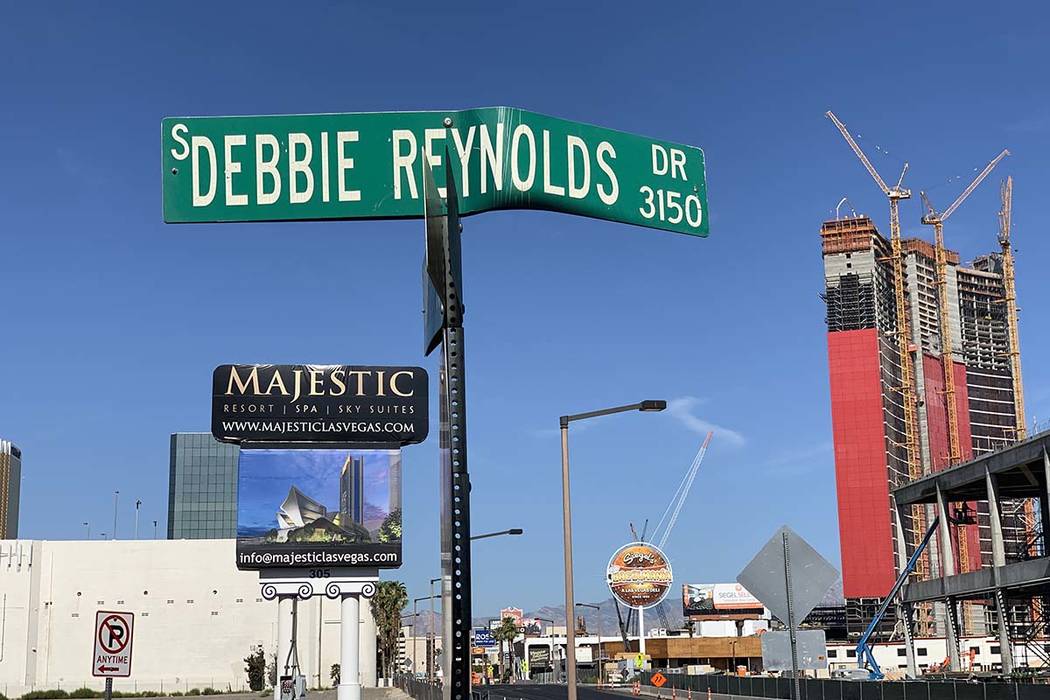 Debbie Reynolds Drive could soon be just a memory as a developer is looking to change the name of the street to reflect a new five-star resort on the former site of the Debbie Reynolds Hollywood Hotel. (Mick Akers/Las Vegas Review-Journal)

A controversy over a street named after stage and film legend Debbie Reynolds may have a Hollywood ending after all.

But after a family and fan outcry arose, Doumani met with Reynolds’ son Todd Fisher to come up with a solution.

“I’ve been working with Todd Fisher and (Clark County) Commissioner Tick Segerblom, and there will be no street name (change) of anything until we get a better street that’s more worthy of her, rather than a block that nobody has much access to,” Doumani said. “If something better isn’t found, then it will stay that way (as Debbie Reynolds Drive).”

The street, which is approximately 1,000 feet long, has been called Debbie Reynolds Drive since 1996, when the Debbie Reynolds Hollywood Hotel requested a change from Mel Avenue, according to Clark County spokesman Dan Kulin.

Doumani, owner of Majestic Resorts, plans to build an $850 million, five-star hotel project dubbed Majestic Resort and Spa along the road where the Debbie Reynolds Hollywood Hotel once stood.

With the resort not slated to open until 2023, Doumani said there’s plenty of time to find a possible street to rename after Reynolds.

One area being looked at is around the Tropicana, where Reynolds often performed, Doumani said.

“She performed in the 1950s at the Tropicana, which is really where she was a mainstay, as well as the Desert Inn,” he said. “We’re basically trying to find something that would be more appropriate. It will either stay where it is or be somewhere far superior.”

The name change was set to be heard at a Clark County Commission meeting last month, but was postponed.

The Debbie Reynolds hotel opened in 1993, and featured Hollywood memorabilia of Reynolds and other entertainment stars. Reynolds filed for bankruptcy in 1997, closing the hotel a year later.

Fisher, brother of Carrie Fisher of “Star Wars” fame, said everyone has been respectful during the process, and “our interest is to see my mom’s legacy preserved in an appropriate way. They say that is also their goal, so that is good. I said all along if they offered a more appropriate street that I would be fine with it. The street now is appropriate because it is where the hotel was.”

Fisher said he’d like to see a more prominent street named after his mother, similar to Dean Martin or Sammy Davis Jr. drives.

“I’m not opposed to what they’re doing; I am opposed to anything that would lessen or degrade her legacy,” he said. “As long as they’re willing to work with us on that, I suppose we’re moving in the right direction here.”

Doumani said no matter the outcome of the street name situation, he will feature Reynolds in a Rat Pack-themed bar slated to be part of his planned resort, and some items from Fisher’s collection of Hollywood memorabilia could be included in that.

“Her (Reynolds’) stuff will be prominently displayed,” Doumani said. “Todd Fisher has everything from Judy Garland’s “Wizard of Oz” ruby red slippers, to Sammy Davis Jr.’s Bojangles hat. He has an incredible collection from the Rat Pack. So, we’re working with Todd with the whole Rat Pack speakeasy we’re trying to do.”