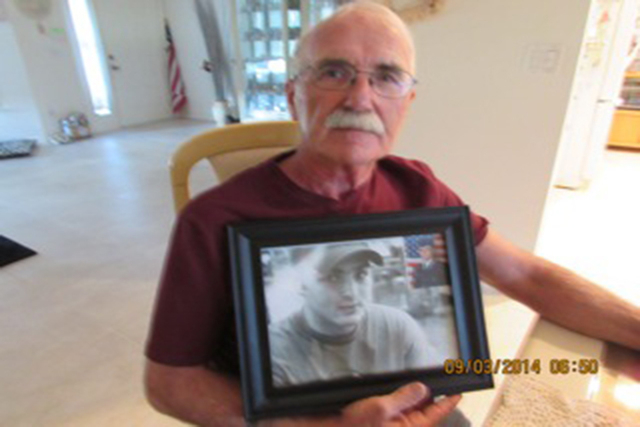 Walter Shersty poses with a photo of his son, Daniel, this week at his home in Port St. Lucie, Fla. (Photo courtesy Mary Ann Clate) 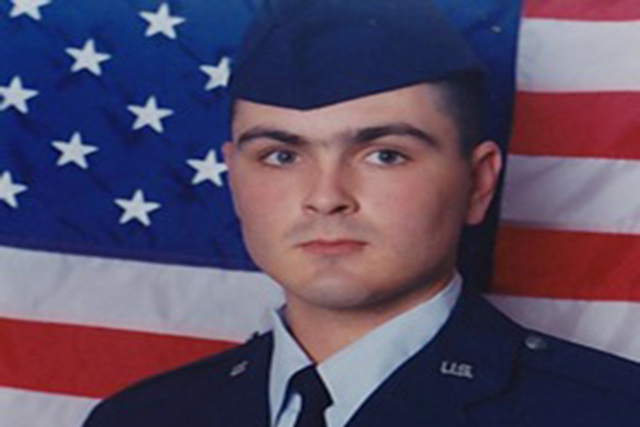 Here is a photo of murder victim Daniel Shersty. He was an airman first class at Nellis Air Force Base, where he serviced fighter jets, when he was fatally shot in 1998. (courtesy Mary Ann Clate)

Federal prosecutors contend that Ross Hack and Leland Jones have gotten away with murder for 16 years.

On Thursday, a jury disagreed and set the men free for good.

Jurors acquitted Hack, 42, and Jones, 33, of all charges following a two-week trial in Las Vegas.

Afterward, Assistant Federal Public Defender Michael Kennedy said members of the Hack family “are just elated that this 16-year saga is over.”

Hack and Jones, who once associated with racist skinhead groups, were accused of helping plan and carry out the 1998 shooting deaths of two men who supported racial unity.

Defense lawyers argued that no physical evidence linked their clients to the killings, which occurred on federal land in northwest Las Vegas.

Kennedy acknowledged that Hack made mistakes as a young man, when he adopted the lifestyle of a neo-Nazi skinhead.

“But like many people, he went to college, earned a degree, learned about life,” Kennedy told the Review-Journal. “And he hasn’t been that man for many years.”

The defense lawyer thanked jurors, who began deliberating around noon Tuesday, for taking the time to render a just verdict on the facts, “rather than simply base a decision on emotion.”

Jurors deliberated a full day Wednesday and announced that they had their verdicts shortly after returning to the federal courthouse Thursday morning.

Hack’s sister Janessa Wilson and brother, Shahn Hack, were in the courtroom with their mother and an aunt when the verdicts were read aloud.

Wilson and Shahn Hack testified for the defense during the trial.

Three people, including Ross Hack’s sister Melissa Hack, admitted their involvement in the killings and testified for the government.

“They know the truth,” Kennedy said of the three government witnesses. “They didn’t tell it in this courtroom.”

Authorities have said Lin “Spit” Newborn, 25, and Daniel Shersty, 20, were killed because they were members of a skinhead group that opposed racial prejudice. Newborn was black, and Shersty was white.

“My heart goes out to the families of Mr. Shersty and Mr. Newborn,” Kennedy said. “And they now know that Ross Hack had nothing to do with it.”

Newborn worked at a body-piercing salon. Shersty, his friend, was an airman at Nellis Air Force Base, where he serviced fighter jets.

Walter Shersty, 66, lives in Port St. Lucie, Fla., and has been following news of the Las Vegas trial.

“I thought justice was going to be done, and obviously not,” he said.

Walter Shersty described his only child, whom he called “Danny,” as “honorable and truthful.”

“He was always fair,” the father said. “He didn’t jump to conclusions or anything like that.”

Walter Shersty, who lived in Florida at the time of the killings, said he did not know Newborn and has had no contact with the man’s family.

Attorney James Hartsell, who represents Jones, said he was pleased that jurors paid attention and carefully considered all the evidence.

“He’s always maintained his innocence,” the lawyer said. “It was always going to be a fight from the beginning.”

Hartsell said authorities had no interest in Jones, who worked as an electrician in Clark County and has two daughters, until John “Polar Bear” Butler began talking to federal investigators in 2011.

Jones was arrested the following year. Hartsell said Jones, who was 17 at the time of the murders, now has cleared his name in court.

“It’ll probably take him a little longer to clear his name in society,” the lawyer added.

Hartsell said Jones spent time with older neo-Nazi skinheads during his younger years but does not consider himself a white supremacist.

“With him, it was never about race,” the lawyer said.

Butler, who once was president of the Independent Nazi Skins, was convicted of both murders in 2000 in Clark County District Court.

Hartsell said state prosecutors “got it right back in 2000,” when they declined to charge other suspects in the case.

Abels was Ross Hack’s girlfriend at the time of the killings.

They said they participated in the killings with Ross Hack, Melissa Hack, Jones and Daniel Hartung. All six had ties to neo-Nazi skinhead groups at the time.

Hartung, Ross Hack’s roommate when the killings occurred, died in a traffic accident in 2012.

Abels and Melissa Hack said they lured the victims to a remote desert site near Powerline Road and Centennial Parkway, where the two men were ambushed and fatally shot in the early morning hours of July 4, 1998. The victims were expecting to party.

Like Abels, Melissa Hack pleaded guilty to conspiracy to commit murder. She is awaiting sentencing.

Melissa Hack’s lawyer, Brent Bryson, said his client “sticks by her testimony,” despite the jury’s verdicts.

Trial attorneys with the Justice Department’s Civil Rights Division prosecuted the federal case. They declined to comment as they left the courtroom Thursday.

“Many people are under the wrong impression that trials are about justice and injustice, truth and falsity, and right and wrong,” Bryson said. “And they’re not. They’re about burdens of proof and usually what side has the most financial resources to further their case. And obviously the jury in this case felt like the government didn’t meet its burden.”

He said the government funded both the prosecution and the defense in the case, so the two sides had equal financial resources.

A representative of the Southern Poverty Law Center’s Intelligence Project, which monitors hate groups and other extremists, attended much of the federal trial.

Heidi Beirich, director of the Intelligence Project, said she was surprised by the acquittals.

“In this case, the government did what it could with what it had,” she said.

Beirich said racist and anti-racist groups often do battle, but their conflicts rarely rise to murder.

“We’ve been watching this pretty vicious crime since it happened,” she said.

She said the trial and the underlying deaths serve as a reminder of the violence that stems from neo-Nazi skinhead movements.

“Frankly, the track record of violence from neo-Nazis and skinheads is long,” she said.

A month after the killings and six days after Las Vegas police searched his home, Ross Hack flew to Germany. Prosecutors said his decision to flee the country was evidence of his guilt.

Kennedy said Ross Hack attended an American university in Prague, graduated, married a Russian woman, had a daughter and wrote a book during his years in Europe. Ross Hack and his wife have divorced, the lawyer said.

Ross Hack was arrested in March 2008 in a passport fraud case after returning to the United States.

He later pleaded guilty to making a false statement on a passport application and was sentenced to three years in federal prison.

Ross Hack was on the verge of being released when he was indicted in the federal murder case in 2012. He and Jones were to be released following their acquittals Thursday.