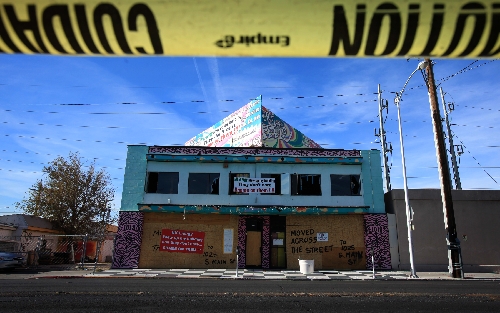 Attic Vintage Clothing Company owner Mayra Politis has filed a lawsuit against NV Energy and Southwest Gas officials a year and a half after a devastating substation explosion caused significant damage to her store.

The incident on Commerce Street damaged several businesses in July 2010, but little has been resolved since.

Politis said she has struggled with both companies in trying to reach financial settlements for the damages and filed a lawsuit against NV Energy and Southwest Gas in December 2011.

“It gets more complicated at the trial because they’ve dealt with me in very bad faith,” Politis said. “Now there’s going to be punitive damages and other ways to get them to pay for what they did.”

Politis said she pays a $4,000 mortgage on the vacant building in addition to the rent where she currently operates her business. She said the financial blow is enough to put The Attic out of business for good at any given moment.

“I’m living on a prayer right now,” Politis said. “Every month has been a total nightmare and a struggle. I’m working with my landlord to lower my rent and stay in business. It’s a formula for failure, and I hope I’m here for January.”

Blackbird Studios, 1551 S. Commerce St., was among the businesses damaged in the explosion. Although Blackbird Studios didn’t suffer as much damage as The Attic, the incident affected the art gallery in other ways.

“We had a lot more foot traffic before,” said Gina Quaranto, owner of Blackbird Studios. “People have to come off the beaten path to find us, but we’re doing OK. We feel terrible for Mayra. She’s a really good friend to us. She was the first alternative business to open down here, and we feel terrible for (The Attic).”

NV Energy officials claim the substation explosion is not their fault, according to Jennifer Schuricht, NV Energy communications manager, and intended to assist affected businesses with damages.

“In January 2011, a third-party investigation concluded that the incident at Commerce substation occurred through no fault of NV Energy,” Schuricht said in an e mail to View Neighborhood Newspapers. “That conclusion is consistent with findings from our own investigation of the incident  We intended to pay some of those whose property was damaged or harmed for some of their uninsured or underinsured property losses. We have reached agreements with the affected businesses, provided we received signed releases from the parties and proper claim documentation.”

Schuricht said in the e mail that Politis “received a substantial insurance settlement to address her property and business losses and that her insurance company has filed and resolved its claim with Southwest Gas.”

Southwest Gas officials don’t take fault for the explosion, according to Cynthia Messina, spokeswoman for the company.

“Our third-party investigation determined that there was an excavator in the area that damaged a pipe,” Messina said. “That’s how (those businesses) got damage.”

Politis said she met with officials from both companies in a Dec. 7, 2011, mediation but nothing was resolved as a result.

“The mediator, Floyd Hale, tried to present our case to (the companies),” Politis said. “NV Energy offered nothing. Southwest Gas offered about $50,000. Next week, we filed the lawsuit.”

Though a trial date is not yet set, Politis hopes that when it occurs, the outcome will be in her favor and business can return to where it was before July 11, 2010.

“All I hope to get out of that trial is to rebuild my building and for (NV Energy and Southwest Gas) to put me back to where I was before,” Politis said. “I just want to be even again. I didn’t owe all this money before. I was in my corner for over 20 years, minding my own business, trying to help that area, and I was cut short.”