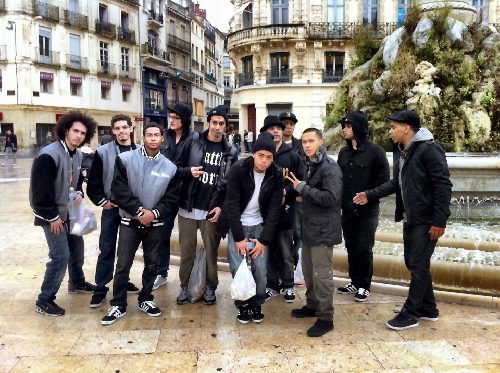 They spin, they jump and they defy the laws of gravity, making break dancing look effortless. Las Vegas’ own Battle Born represented America at the 2011 Braun Battle of the Year, a world championship event in November in Montpellier, France. The group came home with a second-place finish.

Perhaps readers saw them last July when Red Rock Resort hosted portions of the weeklong Hip Hop International dance-off event. Battle Born was in the showcase and competed in the dance battles, although the group did not win. Battle Born regularly uses Summerlin-area locations such as Studio One, 1181 S. Buffalo Drive; the Las Vegas Athletic Club, 9615 W. Flamingo Road, and the Boys & Girls Club, 2850 S. Lindell Road, for rehearsal space.

Battle Born is known as a Bboy crew. B-boying, sometimes called “break dancing,” is a popular style of street dance that was created and developed as part of hip-hop culture. The group was judged on concept, synchronicity, stage presence and choreography. Hernandez said it was nice to see their efforts appreciated.

“They gave us a lot of respect,” he said of the European audience. “Usually at competitions, it’s just break dancers watching. There, it was families, just regular people.”

The dance consists of four primary elements: top rock, down rock, power moves and freezes. It is danced to hip-hop music, as well as other genres. Sometimes songs are remixed, prolonging the music for maximum effect.

Members are called a b-boy, a b-girl or simply a breaker. The name Battle Born refers to Nevada’s nickname as the Battle Born State.

The group was established in 2006 with seven founding members. Since then it has grown to a group of 13 that performs in Strip shows, including Cirque du Soleil’s “The Beatles LOVE, the Jabbawockeez show “Mus.i.c,” “Stomp Out Loud” and Toni Braxton’s “Revealed.”

Jason Guerpo, 26, is a Battle Born member and has performed on the Strip in Steve Wyrick’s show, “Ultra Magician.” He was one of those who flew to France to compete. Competitive dancing, he said, is a lot different from what he did for that show.

“In a competition, there’s a lot of pressure, you’ve got to get “your vibe,” he said. “The freedom comes in the music. With a show like Steve Wyrick’s, it’s choreographed to appeal to the masses. In competition, you do your own style, (inject) more of your character and personality.”

Guerpo said the dance style means often dealing with injuries, usually affecting the wrists, knees, lower back, groin and neck. Those are offset by rehabilitation work and cross training.

“I can’t recall a time in the last two and a half, three years when I was 100 percent healthy,” he said.

To qualify for the competition in France, Battle Born won the Braun Battle of the Year USA competition on Aug. 20 in Los Angeles. It took on local favorites The Squadron and the Gravity Benders from Milwaukee. It was the first time in three years that an American group emerged as a qualifier for the Braun BOTY.

“That, internationally, the culture of hip hop and BBs are taken a lot more seriously by people there,” he said. “They train harder, and it shows in their dance. It’s motivated us to train even harder than we do now.”

The group is not just about dance. Here in Las Vegas, the crew helps keep kids off the streets, influences the youth and acts as a role model for student dancers and the hip-hop community.