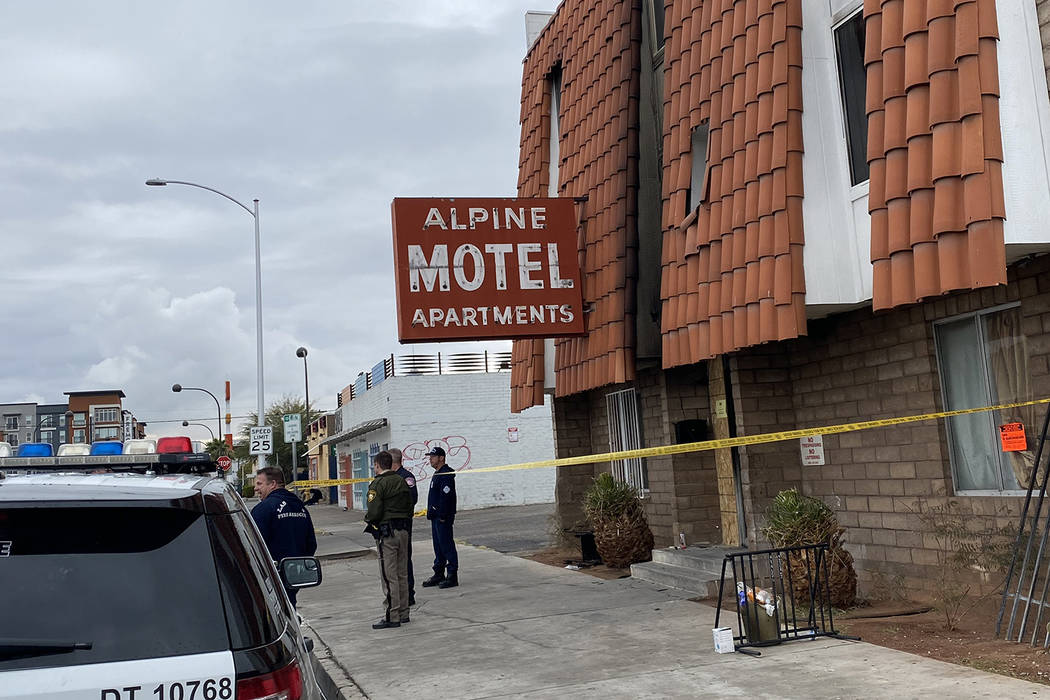 This does not necessarily mean criminal charges will be filed, Wolfson said.

“Metro’s homicide unit is conducting a criminal investigation,” he said. “It doesn’t mean that crimes were committed. That’s why you investigate matters.”

Wolfson said his office has been involved in the investigation from early on.

“We assisted in the preparation of a search warrant, and we are in regular contact with Metro’s homicide division,” he said.

Fire and police investigators were back at the complex at 213 N. 9th St. early Wednesday. Crime scene tape remained stretched around the property as analysts dressed in protective clothing gathered with Las Vegas Fire Department personnel in front of the property.

Later in the day, the Clark County coroner’s office identified the six victims, who ranged in age from 46 to 72. All were described as Las Vegas residents.

Wolfson said one part of the investigation is focusing on “communication between this property and code enforcement.”

“It is no different than any other criminal investigation,” he said. “There is the crime scene investigation which happens in virtually every case. There is the forensic part of the investigation, then there is everything else, interviews with witnesses. In a case like this, we want to know what communications have occurred between this property and code enforcement or other regulatory agencies.”

It is too early to speculate what charges, if any, would be applicable if the inquiry identifies any criminal wrongdoing, Wolfson said.

“It is still in the investigatory stage,” he said. “We want to find out factually what happened and why. Once we determine the facts, then we conduct an analysis of the facts.”

The fire broke out at 4:13 a.m. at a time when most residents of the downtown complex were sleeping. Witness accounts and video from the scene show thick, black smoke billowing from the property as some residents jumped from windows of the three-story complex. Occupants said a rear exit door was bolted shut and that they never heard any alarms go off.

The Las Vegas Fire Department and city Fire Marshal Robert Nolan said the origins of the fire have been traced to a stove in a first-floor apartment; the fire is believed to have been an accident. Survivors told the Las Vegas Review-Journal that they routinely used stoves for warmth because they did not have heat.

The Alpine complex was built in 1972. City records show it was the subject of at least eight code enforcement complaints from 2016 through 2018. Twice in early 2016, residents complained about a lack of fire safety equipment, including smoke detectors, smoke alarms and fire extinguishers. The records do not show how the complaints were resolved.

Las Vegas City Councilman Cedric Crear, whose ward includes the complex, said it had a history of code enforcement cases, but that all had been resolved before the fire.

In the past two decades, Orozco went from a school teacher in Napa, California, to owner of more than a dozen properties in Nevada, including the Alpine, records and online social media shows.

Orozco’s LinkedIn profile showed him working as a public school teacher in Napa starting in 1998, the year he graduated from Sonoma State University with a teaching degree. Within two years, he listed himself as a real estate investor.

Right after the 2008 real estate crash, he acquired 10 houses and a condo in various parts of Las Vegas, Clark County property and Nevada secretary of state records show.

Many of the properties were in foreclosure.

Over the next eight years he acquired the Alpine (in 2013) and the Casa Blanca and Starlite motels in North Las Vegas, records show.

Malinda Mier, who spoke to the Review-Journal at the scene of the fire Saturday, said she was a co-owner of the property, but Las Vegas Dragon Hotel business records do not list her. She is listed on records for businesses associated with some of Orozco’s other properties.

In 2011, Orozco also listed himself as a recruiter and salesman for Herbalife, his LinkedIn profile shows.

He also has interests in a drain cleaning business, which is listed at an address for the Dragon Motel, which he bought in 2009 and sold in 2013, and apparently a yoga, acupuncture and massage business in Rhode Island, according to record databases.

Attempts to reach Orozco at various phone numbers and emails associated with him and at his businesses were not successful. An attorney representing him declined comment when contacted over the weekend.