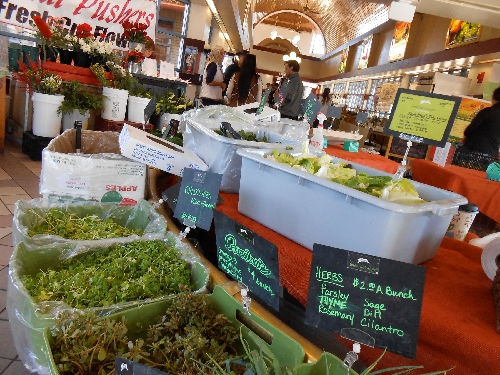 The market, on Third Street between Stewart and Ogden avenues in the old downtown transportation hub building, has provided Las Vegas’ urban core with a source of fresh produce since March, but founder Kerry Clasby said the attendance levels are not where she would like.

“This is the best-tasting, best-grown produce in town,” she said. “If people knew what we have, they would be here every week.”

The property is owned and maintained by Fifth Street Gaming, which also owns several casinos, bars and restaurants in the valley, including the proposed Downtown Grand casino.

Fifth Street Gaming is allowing the market to utilize the nearly mothballed downtown building adjacent to the Mob Museum indefinitely, according to Clasby.

“We’re going to be a permanent fixture in this community,” she said.

Randy Gibson and his wife, Rosalind Gibson, run the Bloomin’ Desert Herb Farm out of their Henderson home and have sold their culinary and medicinal herbs at the Downtown3rd Farmers Market since it opened.

“It’s been like any other market. It has its highs and lows,” he said .

Gibson added that tourists staying in the area have helped to supplement their sales.

“It’s fortunate for us. We get to meet people from all over the world,” he said. “Our products are in Norway, Germany, Japan. You might say we’re an international company.”

The farm recently brought aboard Alexis Cooper to act as market manager to drum up business and better organize events.

Cooper, who moved to Las Vegas from Oregon to run the then-newly opened Human Bean coffee shops, said she was drawn into the market’s friendly atmosphere from the beginning.

The market has a small marketing budget provided by Fifth Street Gaming, but most of the promoting is done the old-fashioned way by passing out fliers, Cooper said.

“We’ve been telling anybody and everybody about us,” she said. “This is a unique way of supporting the people that live in our community.”

Cooper added that the market has plenty to offer.

“There is more than just produce,” she said.

Clasby said she is optimistic that as the downtown area’s population grows in the coming months, so, too, will her customer base.

The neighborhood is growing. The Downtown3rd district, which the market is associated with, includes the Hogs & Heifers Saloon, Triple George Grill and the Mob Bar. The area around Third Street and Ogden Avenue will eventually be home to 18 bars and restaurants that Clasby said could draw customers.

“We have incredible customers who want fresh, organic food,” she said. “We have a great following. We just need more. We have to keep growing.”