On a long-abandoned lot that used to house a mid-century motel, a new retail concept aims to sell Las Vegans on tacos, coffee, flowers, bath salts, photography — and the idea of community.

Fergusons Downtown opens Friday in downtown Las Vegas. The shopping center (1028 Fremont St.) is the new home of a handful of local artists who are settling into a brick-and-mortar store for the first time.

The two-story U-shaped structure got its start in the 1940s, when it opened as the Franklin Motel. In the 1960s, the Ferguson family purchased the motel and put their name on the marquee. 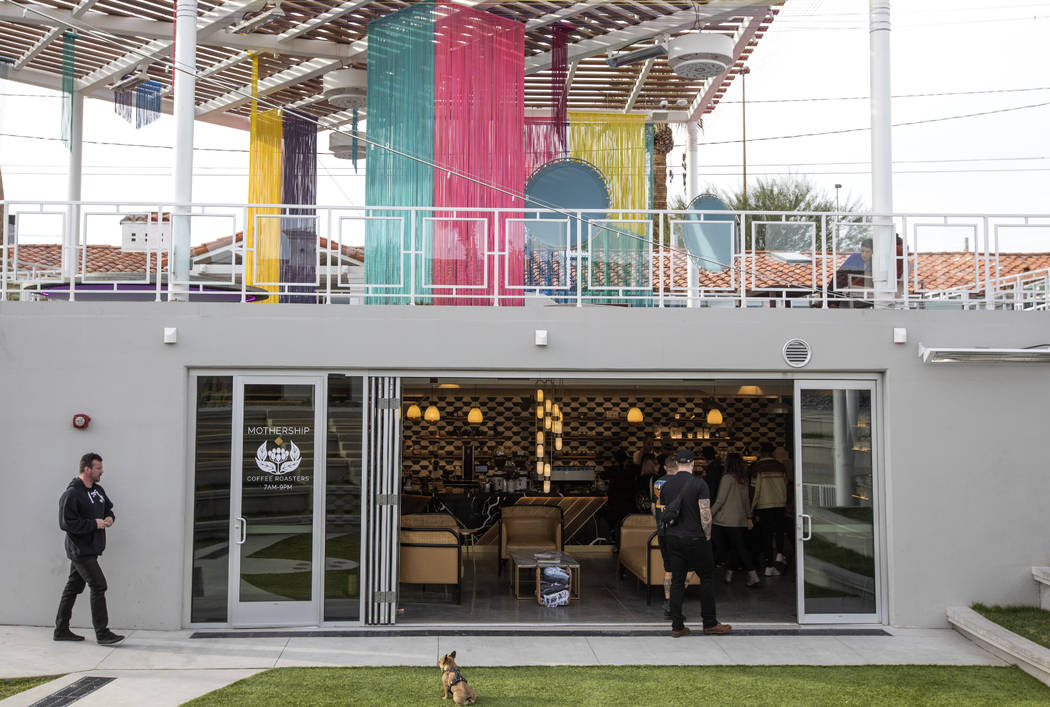 “Three years ago, Tony asked me if I would be interested in doing something with Fergusons,” says Taler, who befriended Hsieh while working as a buyer for Zappos. “He had visions and ideas for this big thing for the community.”

Taler worked out a plan for the space that would incorporate creativity and encourage visitors to linger for longer than an hour or two.

“Fergusons has such a good vibe to it,” says Taler, the co-founder and creative strategist at Fergusons Downtown. “And I just think that stands true with it being built by family and that love and that energy that were put into it.”

While Taler worked to make the grounds habitable, she launched Market in the Alley, an outdoor shopping event held across the street where vendors can sell homemade goods.

“It grew from one day a weekend to a two-day market, from 16 vendors to an average of 50 and from maybe 200 people showing up to over 2,000,” Taler says. “It’s a great testing ground for people who might want to have their own business.” 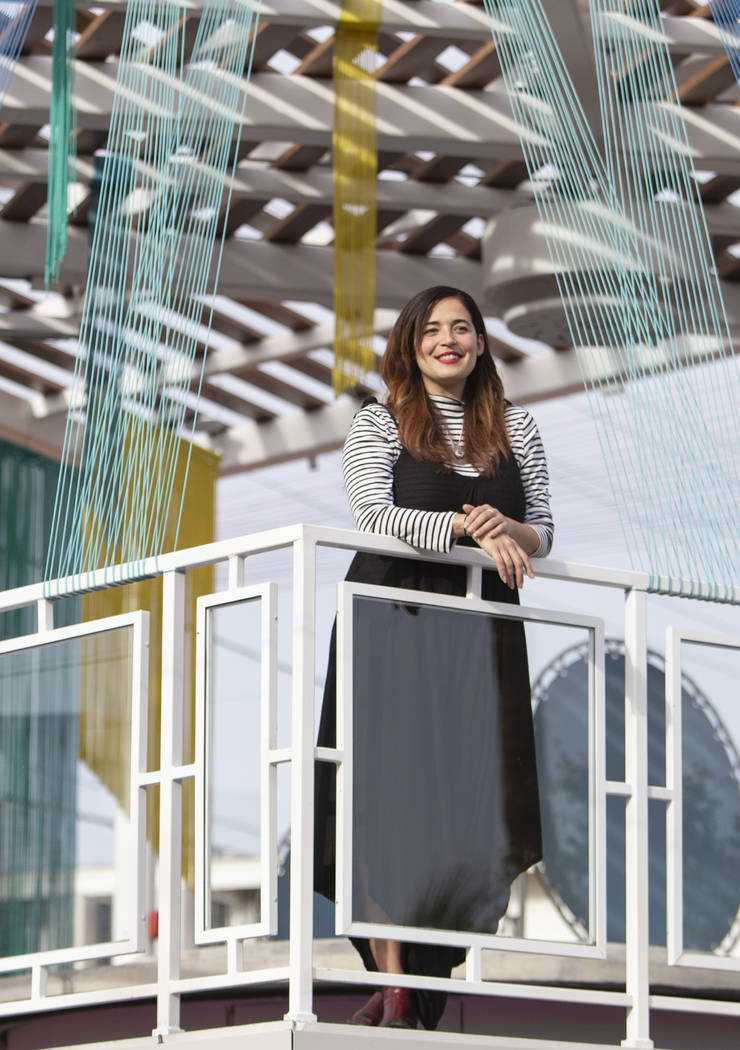 Other tenants found their way to Fergusons through Instagram.

When Taler posted, seeking ideas on what to do with plant donations from Bellagio, Las Vegas local Brooklyn Martell responded, offering to host a plant swap.

Plant Swappers was born and grew successful enough for Martell to open her own plant shop, Carrie Lynn’s.

“I think that’s such a great story because like, oh, you had an idea. We sat down, we’ve talked about how can we just test this concept. She spent a year kind of playing with it and now she’s going to have a store,” Taler says.

At the campus’ center, the parking lot has been gutted and replaced with an amphitheater, grassy lawn and rosebushes, bougainvillea and cactus.

“I’ve felt like downtown Las Vegas is a pretty strong community for a long time,” Taler says. “We need to find how this is sustainable for both parties and make sure, as a community, we’re working together.”

By this weekend’s grand opening events, about a dozen new businesses will be set up in what used to be motel rooms. Here is a closer look at several of them. 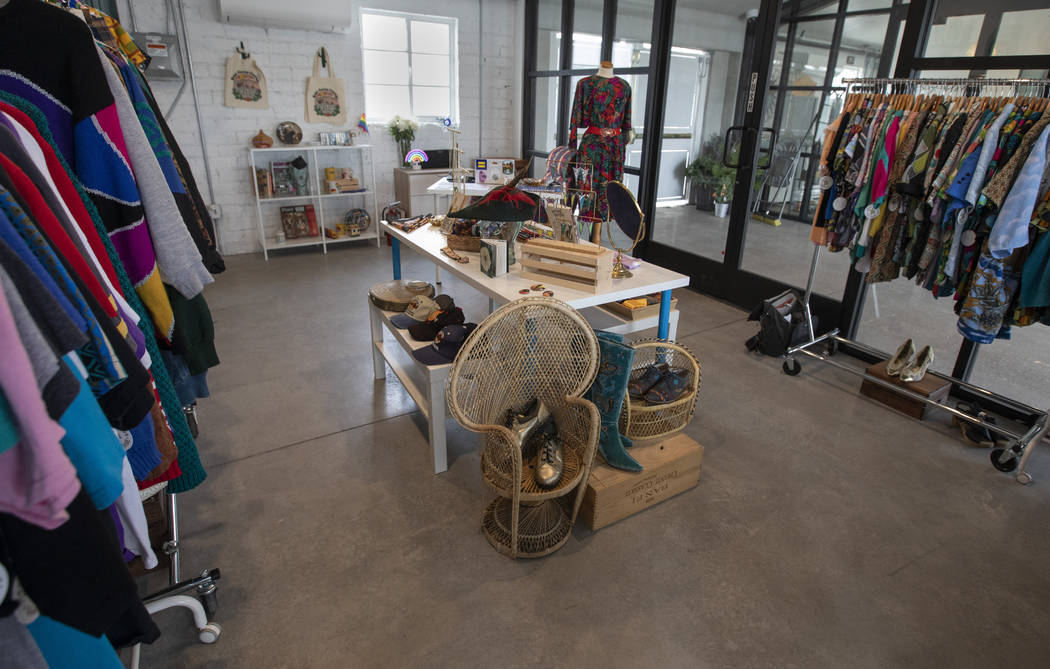 Negar Hosseini-Nasab began thrifting when she was 14 years old.

“It was more of a necessity because I was on my own,” she says. “It turned into a passion.”

“The community is so present and supportive and really welcomed us. We’ve been really embraced by the LGBTQI community,” Hosseini-Nasab says. “This is where our community is based, where we got our start with Market in the Alley and people know where to find us.” 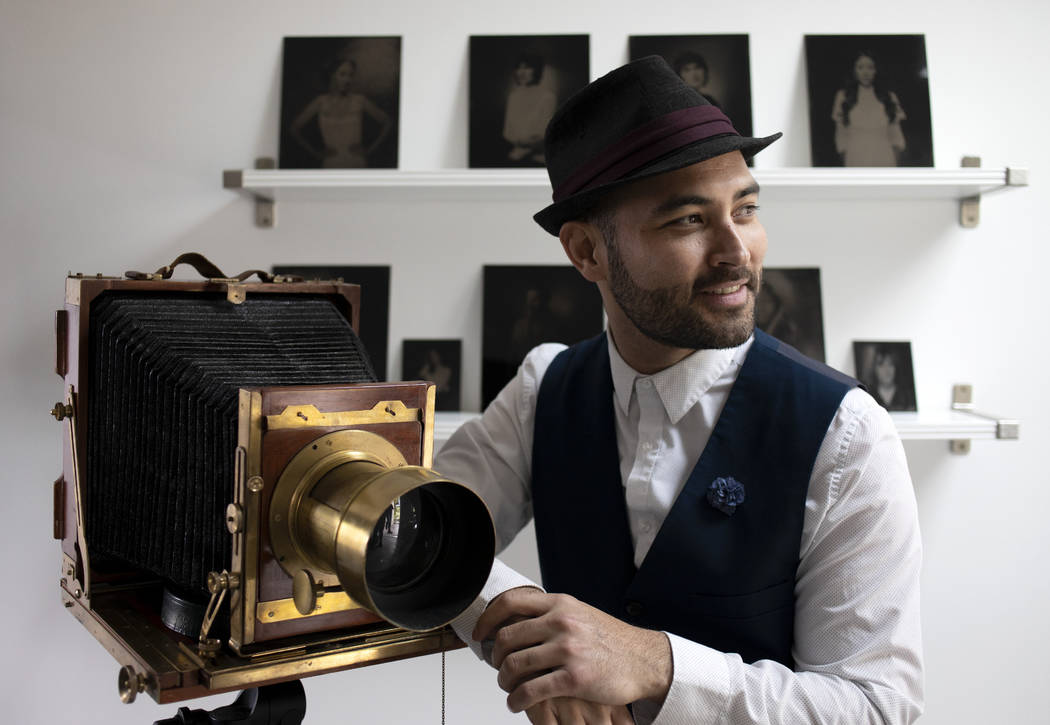 Inside Myron Hensel’s photography studio, one will find a glittering backdrop, uniform metal plates and one of those comically large old-timey cameras that show up in black-and-white movies.

Hensel was feeling in a rut with his professional photography and sought out a medium that was less digital. He landed on an 1850s style of photography called tintype.

“The process is great,” Hensel says. “It’s a long process. I’m able to be more thoughtful with the images I take.”

The wetplate collodion process forges a highly-dimensioned portrait onto a piece of sensitive metal.

“You get something tangible every time you do a portrait,” he says. “The exact light that exposed the plate is preserved in a one-of-a-kind portrait with silver and light.” 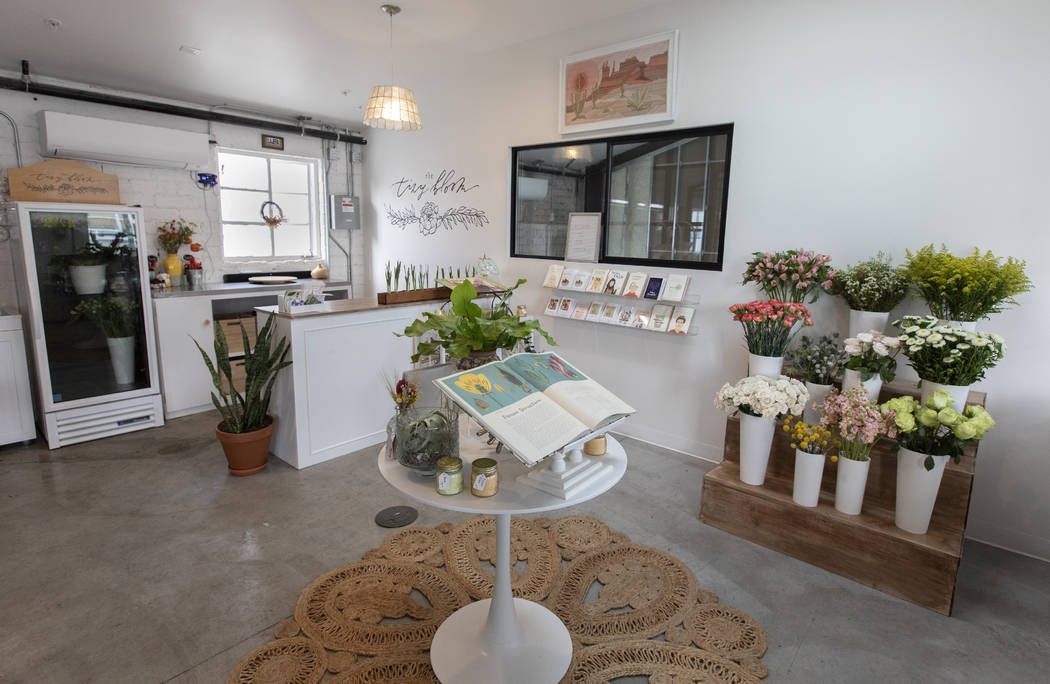 After moving to Las Vegas, she visited Market in the Alley and talked with Taler about the potential for a floral shop.

Two months later, she stocked a cart with American-grown florals in textures and colors that Lichorobiec wouldn’t expect to find in a traditional arrangement and started selling at the monthly event. In her first brick-and-mortar store, she creates custom bouquets and offers a stem bar where visitors can build their own or walk out with a single stem.

“It’s been a dream of mine as a first-generation American, to feel like I’m helping my family through that ‘American dream,’ ” Lichorobiec says. 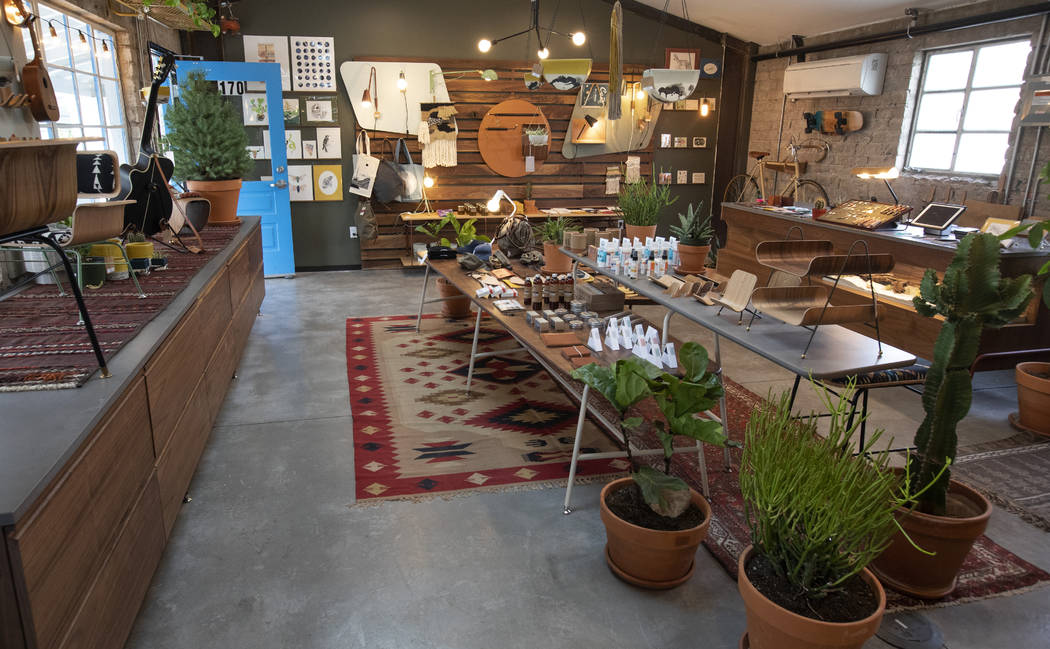 All For Our Country

Roxanna and Logan Hendrickson started their lighting and furniture company in Henderson about six years ago.

In that time, they worked out of a private warehouse and shipped products that Logan designed, largely to out-of-state customers.

Having a shop means having their first showroom, which the husband-and-wife duo are taking advantage of by keeping rocking chairs and guitar hooks in stock and building a cash wrap credenza with enough space to house their pet snake.

“When Fergusons posted that they were looking for tenants, we saw the history of the building. And the balance of industrial and history, which is what Logan’s designs are like,” says Roxanna Hendrickson. “It’s been fun building it out.” 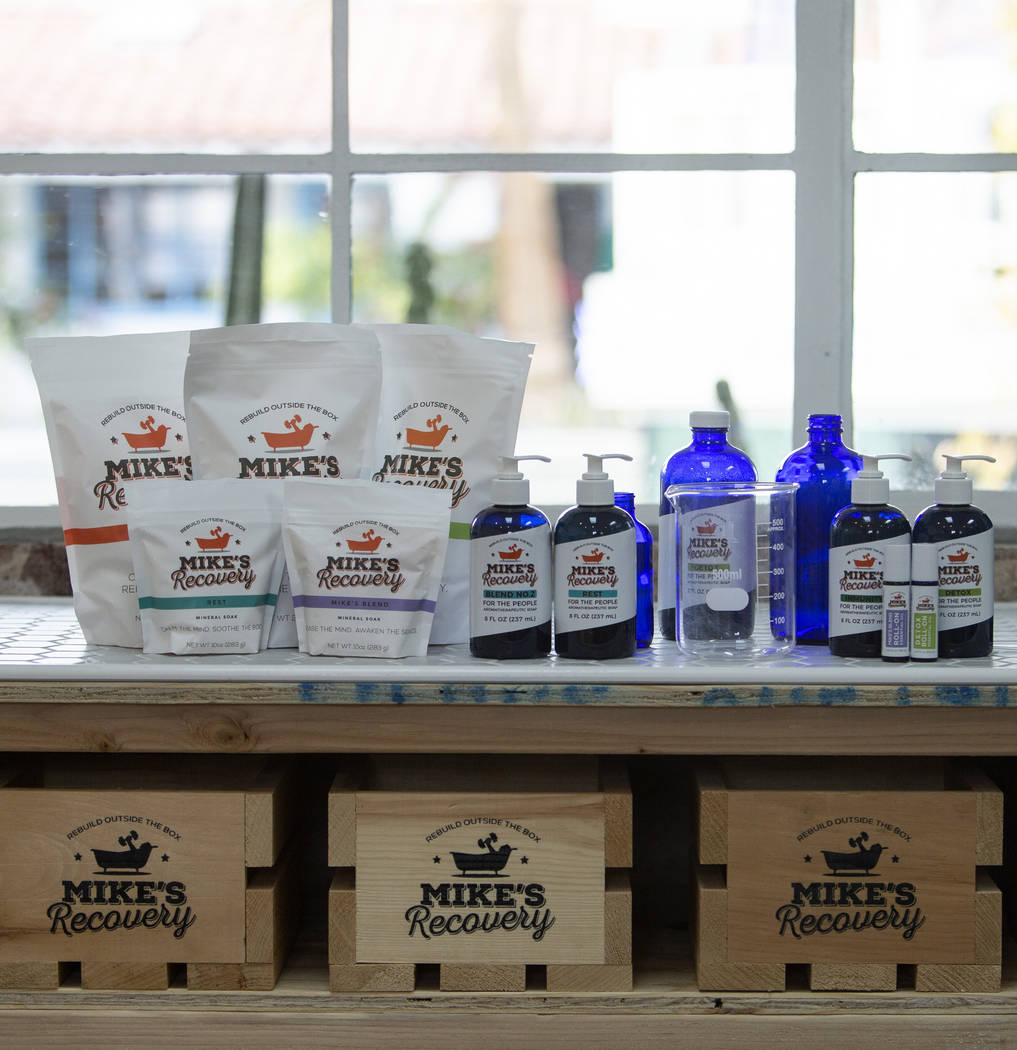 Massage therapist Michael Buckham began experimenting with aromatherapy as a teen at his home in the U.K.

“I was obsessed with trying to ‘feel’ frequency in my brain from a specific oil; my sense of smell became intense to say the least,” Buckham says.

He thinks that people, Americans especially, don’t self-nurture as often as we need to and that bathing is at the forefront of emotional well-being.

After 20 years in the Las Vegas spa industry, he began developing therapeutic bath salts for his clients both at the spa and through his personal CrossFit business.

Taler first encountered his products at the downtown coffee shop PublicUs, where Buckham’s handsoap was available in the bathroom.

“She messaged me on Instagram and asked for soap for the tiny house and Airstream community behind Fergusons,” Buckham says. “Dreams do come true if you persevere and remember to nurture them.” 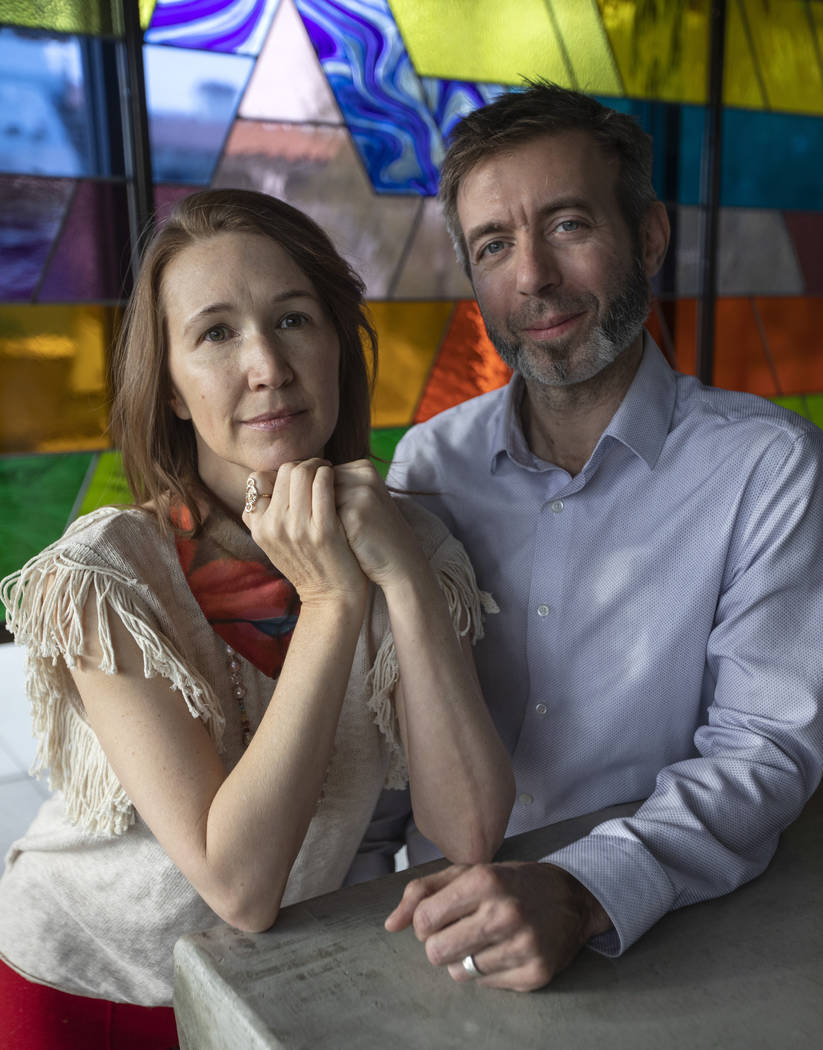 Illumine Social Club embraces light in all its forms: its refraction in gemstones, its capture in a photograph, photosynthesis in botanicals and the less literal illumination that comes from a meaningful conversation.

“Broadly, it’s a gathering place for ideas,” co-owner Paul Fickett says. “We’ll have monthly curated talks. And the retail side is all products that have to do with light.”

Fickett, who did lighting in the entertainment industry for over 30 years, and his wife Megan Victoria, a gemologist, bonded over their relationship with light.

Their shop sells jewelry from Victoria’s personal line, art from other makers and an alternative photography studio for biofeedback photography that Fickett says is often referred to as aura photography.

“When you want to find bonds, you find them,” Victoria says. “The impetus of the social club is to build bridges and find ways we’re more alike than not.” The car that Tupac was shot in is for sale - VIDEO
The vehicle that legendary rapper Tupac Shakur was riding in when he was shot after a boxing match in Las Vegas is up for auction. The black 1996 BMW 7 Series is listed by Celebrity Cars Las Vegas for $1.75 million. (Angus Kelly/Las Vegas Review-Journal) Fremont Street is getting a new LED sign - VIDEO
The Fremont Street Experience is planning to add an LED sign that pays tribute to downtown Las Vegas’ history. The 430-square-foot sign is set to be built on the east side of Main Street and Fremont Street. (Las Vegas Review-Journal) 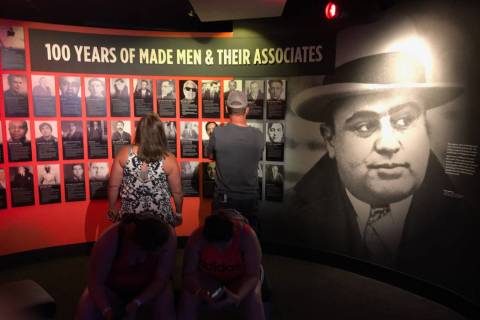 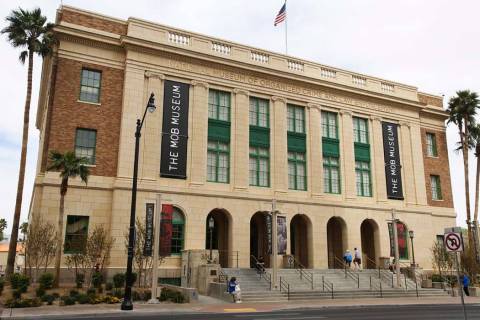 Other activities include exploring a hip-hop album, vegan hot dogs and a Jimmy Buffett musical.