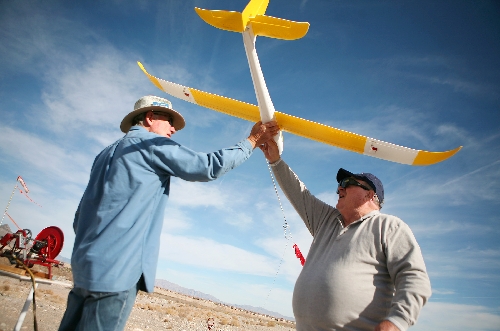 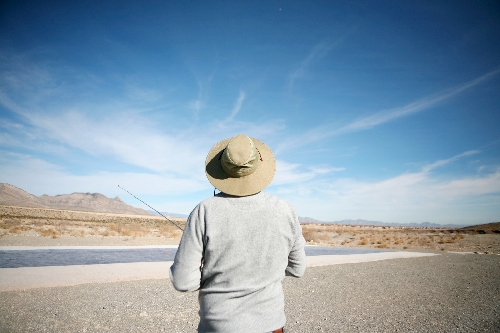 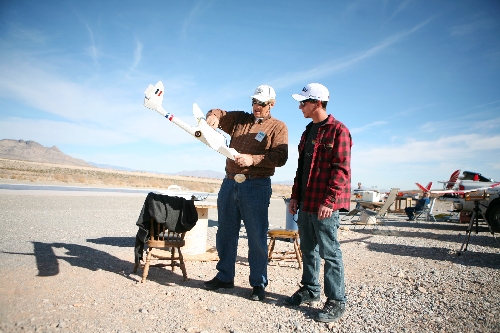 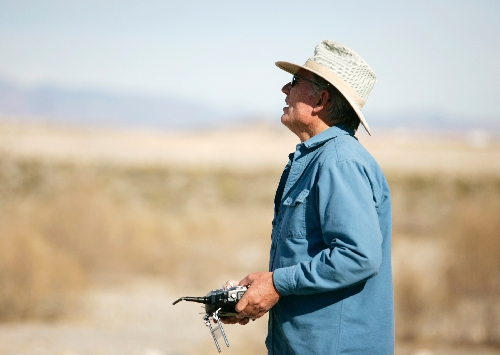 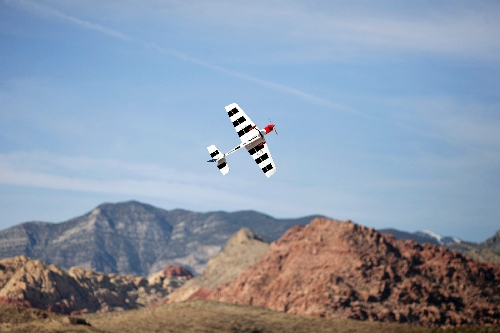 There are no long lines at this landing strip. No baggage handling charges, either.

This one is convenient to Summerlin — along the northern side of West Charleston Boulevard, two miles west of the Las Vegas Beltway. It’s only 200 feet long.

Best of all, it’s made of carpet.

It’s the landing strip used by the Las Vegas Soaring Club. Its members fly model airplanes that are operated by remote control. It may be for model airplanes, but it has to abide by official restrictions just like commercial jets.

"When the president is in town, or some VIP, we’re not allowed to fly," said club member Marvin Weintraub. "The big planes can’t fly, and we can’t, either."

Weintraub is a Sun City Summerlin resident whose fascination with flying began at age 7. He was in the Korean War and served as a crew chief for the F-84s. Other members defer to him on matters of upkeep and fine-tuning.

Club president Dave High has been flying remote-controlled airplanes for about six years. He said Las Vegas is perfect for a remote plane club because it never sees 20 degrees below zero weather. Even so, in winter, members seldom drive out to the site before mid-morning. They need the sun to warm up the ground to provide thermal waves to help with lift.

High owns three planes and four helicopters. At the height of his involvement, he owned eight planes.

"The only problem is that it isn’t easy, and when you crash, it can be a real buzzkill," he said. "Everyone crashes, no matter how good you are. But when the skies are blue, the wind is calm, and you have a good flight, it is an amazing place to be."

Another member, Frank Drake, built his first model plane at 13, in 1963. He went on to become a licensed pilot. He now has three model planes.

Besides the camaraderie, Drake said he enjoys "the freedom felt as a plane takes to the air. And you can control the motions from the ground. It is just plain fun. No pun intended."

The Soaring Club was formed about 15 years ago. Over half of its estimated 70 members fly both sailplanes and electric-powered models. The gliders can have wingspans measuring more than 10 feet in length.

Some members’ planes resemble barnstormers, while some look like vintage military aircraft. Most are no more than 3 feet long. They can range from $200 to $700, depending on the model.

Other model airplane clubs may have a concrete landing strip. The carpet, a remnant procured from an outlet store, was installed to save wear and tear on gliders, which normally don’t have landing gear.

Nowadays, the planes use electric power. Batteries can keep a plane aloft up to 10 minutes before another change is needed, Weintraub said.

"Ten minutes is a long time, doing this," he said.

He said he normally limits his flights to six minutes. It keeps him from having to find airplane parts strewn across the desert, something he was doing when he first arrived.

Gary, who asked that his last name not be used, is a 20-something Nellis Air Force Base airman and one of the youngest members of the club. He has two planes, and his day job is piloting drones for the military. Flying model planes, he assured everyone, was much more fun.

"These things can do cool stuff, high-performance maneuvers, things that real planes could never do," he said.

He credited the power to weight ratio, which make the planes more nimble. He proceeded to put his prop plane through various maneuvers worthy of a Thunderbird jet — the knife edge spin, a tumble and near stall followed by a steep dive.

Then Gary’s $700 plane screamed in a power drive, straight toward earth. He leveled it off at the last minute, about 10 feet above the desert floor.

Not everyone wanted a crowd. Weintraub starts his day in solitude.

"I come out early in the morning and have heard the coyotes howling out there," Weintraub said, gesturing to the Red Rock hills.

Then he scuffed away, eyes scanning the ground, seeking out plane parts from previous crashes.

For more information about the club, visit lasvegassoaring.org.