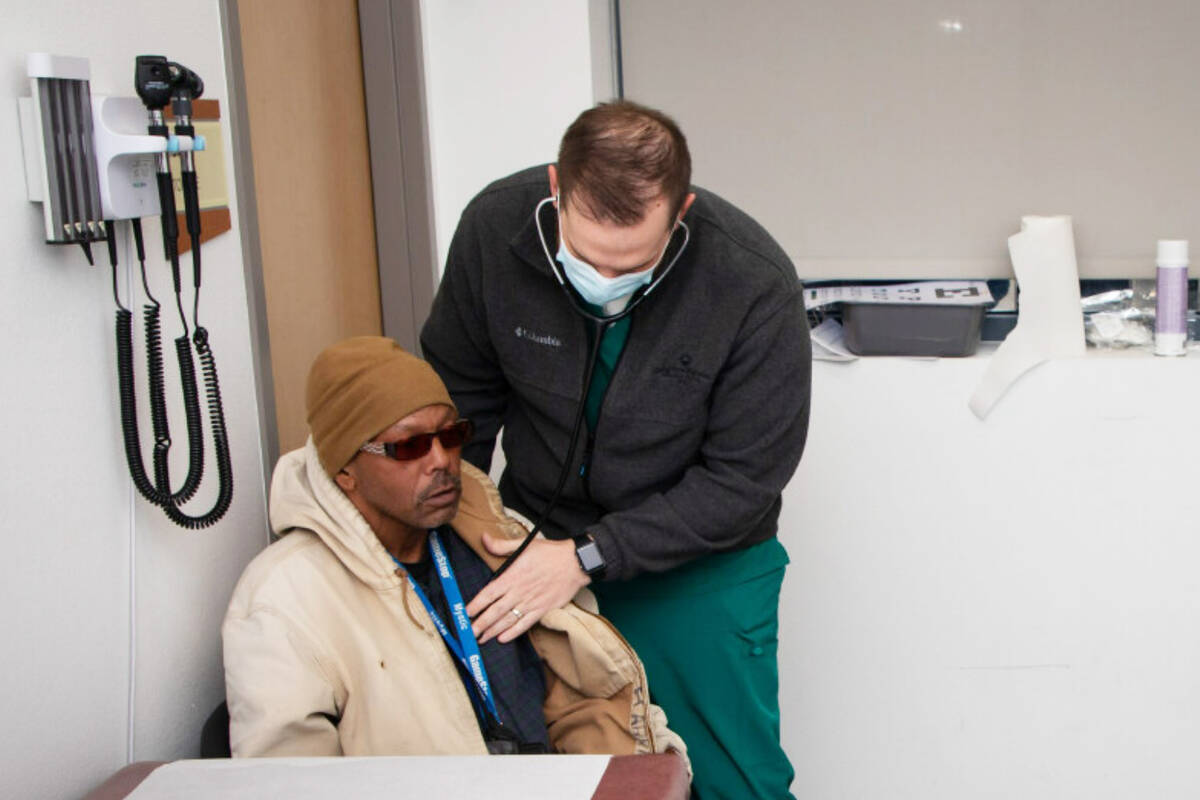 Anthony April, a fixture at the Courtyard Homeless Resource Center, was once leery about the in-house medical services offered at the downtown Las Vegas facility.

“I just avoided them, in a sense,” he said Wednesday evening after Myles Adamson, a nurse practitioner, listened to his lungs with a stethoscope.

“But then I was sick and I needed their help,” said April, who Adamson affectionately referred to as “Mr. Tony.”

Another “street medicine team,” made up of Las Vegas Fire Department personnel, walks the surrounding areas seeking people in need of care.

“They’re out in the field, literally,” said Kathi Thomas, the city of Las Vegas’ director of neighborhood services.

The shelter already offered a place to sleep and other social services. Medical care started about 18 months ago.

But, “one of the biggest things is to get people, sometimes, to agree to other kinds of services to address their immediate needs,” she said. “And health care is one of those needs.”

When someone fell ill, prior to the program’s arrival, workers called emergency services.

“Every time you call an ambulance, or a fire engine, they’re gonna run you to the emergency room,” Thomas said. “That’s a really high-cost system.”

The program has “dramatically cut down” such calls, she said. And while some patients still require further medical treatment that can’t be accommodated at the clinic, the staff has a pulse on a lot of the conditions.

“So that’s what’s important about the street-based team because they can then get familiar with the folks who are chronically homeless over time and establish a trust relationship with them,” Thomas said.

Every month, the courtyard serves about 1,700 people who are experiencing homelessness, which breaks down to about 300 people during the day and more than 400 who sleep there every night.

The street medical team treats between 50 to 100 people a day, while Adamson, one of three rotating providers, evaluates up to a dozen of the neediest each day.

Adamson, employed by Hope Christian Health Center — a contractor with the city — is a Texas native who moved to the valley about three years ago.

“We very much so desire to just see the neediest people,” he said. “And, so, regardless of whether that’s people who live in low-income housing or people who live in communities that have poor access to health, or if it’s servicing the unhoused we’ve always wanted to find those avenues to be able to care for those people.”

“Whenever that opportunity was presented to us, we wanted to be able to serve,” he added.

April, who was riding an electric wheelchair, his “new toy,” said he is checked out about once a month, and that he regularly drops by the clinic to update the medical team about his medications.

“They’re always there for me,” he said.

The 61-year-old moved from Chicago and lost his apartment when his rent more than doubled during the pandemic, he said. His Social Security disability benefits weren’t enough to cover his housing, and now he shelters at the courtyard.

He said he’s saving money to move to the Philippines soon.

While April was initially suspicious about the medical treatment offered at the courtyard, he learned to trust the friendly staff.

“They just talked straight to me,” he said. “They’re genuine and authentic, and I like that.”

After his checkup, he stood up, fist-bumped Adamson, and made his way back to his wheelchair.

“Once I met them, they were fabulous,” he said. “I’m serious, they’re fabulous.”