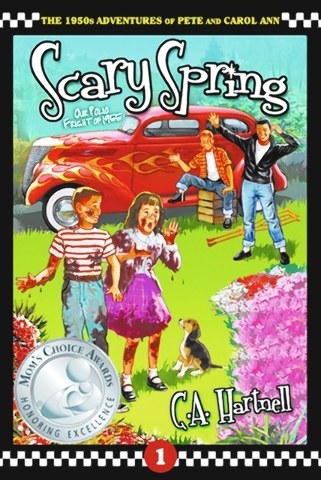 “Yep,” said Pete. “But what are you worried about? You’re a winner, Carol Ann. You just won at Dodgeball. You can win at getting a shot.”

“That’s not true. I’ll faint! I’ll throw up! I’ll flee like … a puppy! Hey, fleeing is a good idea!” My stomach churned. “Puppy, can you teach me to run? I hate shots. I hate Aunt Ruthie’s shots. And I’ll really hate getting a shot from the school nurse.”

Pete looked at me and said, “Aw, gee, the school nurse gives good shots when you hold real still. It’s just a little pinch that stings a tiny bit.”

Then I thought to myself … polio’s worse. It’s THE WORST. Polio cripples and kills. Look how it crippled Tim. A shot’s not as bad as getting polio. O God, give me courage, I prayed. “What day is the vaccine arriving?” I asked in a resigned voice.