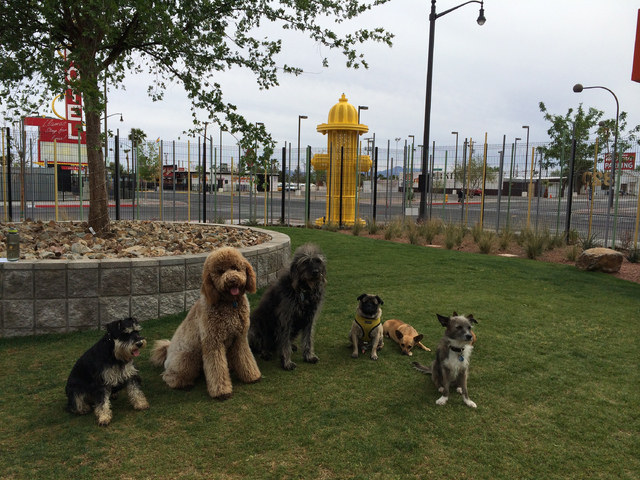 The Hydrant Club, 109 N. Ninth St., offers a play space for dogs and serves as a social hub for their owners. (Special to View) 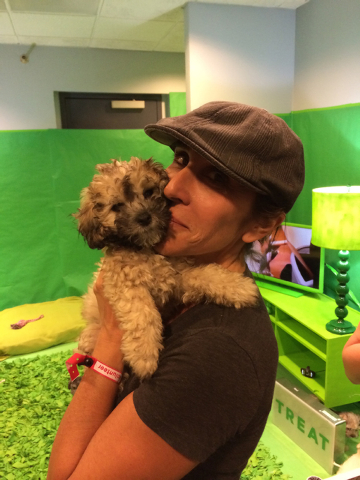 Cathy Brooks, owner of the Hydrant Club, said she plans to add a patio with tables, umbrellas and chairs at the facility. (Special to View)

It isn’t surprising that Cathy Brooks might be looking for bones at the new building for the Hydrant Club, the downtown dog park and canine day care facility. What’s unusual is that the bones for which she was keeping an eye out were human.

The building, 109 N. Ninth St., was formerly the lodge of the Independent Order of Odd Fellows and Rebekahs, a fraternal organization that has seen its number dwindle in recent years to the point where the building was more space and hassle than the organization needed.

“A lot of the Odd Fellows lodges used actual human bones in their initiation ceremonies,” Brooks said. “It’s not unusual for people renovating their old buildings to run across a secret compartment with bones in it.”

Brooks didn’t find bones, and with the extensive renovations, if they were there, they probably would have turned up. What she did find and rescue were some old newspapers that were being used as insulation that included a story about the Nazi invasion of Poland.

At first glance, the Hydrant Club looks like it could be just another dog park, albeit one that is in the heart of downtown and features a working, 15-foot-tall fire hydrant. The club is much more than that, serving as a canine day care, a dog training facility, a boarding facility and a social hub for downtown dog owners.

“When the trailer comes out, we’re going to put in a little patio in that space, with tables, chairs and umbrellas,” Brooks said. “You’ll be able to come down and check out your dog, maybe eat lunch or work out of the office for the day.”

Not all dogs can visit the club. Brooks has a screening process that takes about 60 to 90 minutes of one-on-one time with the prospective pup pals before their humans can sign up for day care or park privileges. She uses a scale similar to the Myers-Briggs Type Indicator for human personality.

She sees whether the dogs are introverted, extroverted or are bashful or dominant. Dogs that fall toward the middle of both scales are best suited for the park, although most dogs pass muster, and Brooks and her staff are willing to work with owners to help them massage their dog’s traits to the point where off-leash play is appropriate.

“We work on behavior stabilization,” Brooks said. “We try to shave off the edges of those behaviors. Dogs are pretty simple; their behaviors are linear. If there isn’t a clear structure and order with a leader at the top, they will fill in those gaps, based on their personality.”

Brooks and her staff fill those leadership positions, with a firm but loving attitude. A growling client is told firmly to “take it down a peg.” A dog jumping excitedly at a new person visiting the club is rebuffed with a simple, “Really?”

On a recent visit, 30 dogs of varying sizes were playing in the large fenced-in field on real grass shaded in the summer with 10- to 15-year-old trees. A play area can have jets of water activated at the push of a button, and a water dish is filled when dogs walk on a pressure-sensitive plate.

“We let them know that it is a safe place where they get to be dogs, but they are not in charge,” Brooks said.

Kimberlie Shea has been bringing her two cavalier King Charles spaniels since the Hydrant Club opened in December 2013.

“They love to come here,” Shea said. “They get very excited when we tell them they’re going to go clubbing.”

Shea and her life partner moved to the valley a few years ago, and she and her dogs have lived in Beverly Hills, Calif., and New York City. She said the Hydrant Club was far superior to the dog parks she visited in those places.

“They (the dogs) can be intimidated by big dogs,” she said. “Some of the owners there weren’t good dog parents and didn’t control their dogs. We never have that problem here. I know I can leave them here, and they’re safe. It’s a great place for me to visit, also.”

Running the Hydrant Club is a change for Brooks, who spent most of her career life in the high-stress, nonstop world of media and public relations for the tech industry. She was a person who made plans and followed them through, usually to success, but she discovered that she wasn’t as happy as she wanted to be. She began making new plans. She didn’t know where they would lead, but she knew she was going to the dogs.

“Whatever I did, I knew I was going to be surrounded by dogs,” Brooks said. “Dogs are always completely in the present.”

She explained her journey at a Dec. 5, 2013, independently organized TED Talk event that can be seen at tinyurl.com/ttbrooks. She begins by saying, “An accident is a very bad way to plan a career” and then explains how that is what happened to her.

“I’d been in tech since ‘91 and fell into it completely by mistake,” she said. “Around 2010, I became tired of it and realized I was done. It became very clear that the path I was on was not the right path, and I needed a tectonic shift.”

She had met Zappos founder Tony Hsieh years before but ran into him again at a conference in 2010, and he suggested she come visit Las Vegas for a couple of weeks and bring her dog.

She liked what she saw, with one exception: There weren’t many places to go with your dog downtown. A chance meeting led to a casual conversation with Don Welch, who heads the Downtown Project’s small-business team. She began discussing what had been on her mind most of the week: what needed to go into a good downtown dog park.

“He said it was a great idea and asked if it was a business I’d move here to run,” Brooks said. “Without thinking, I said yes, and in a few days, I submitted a business plan. Six months from my boots on soil in August, I had moved into town to work on making the Hydrant Club a reality.”