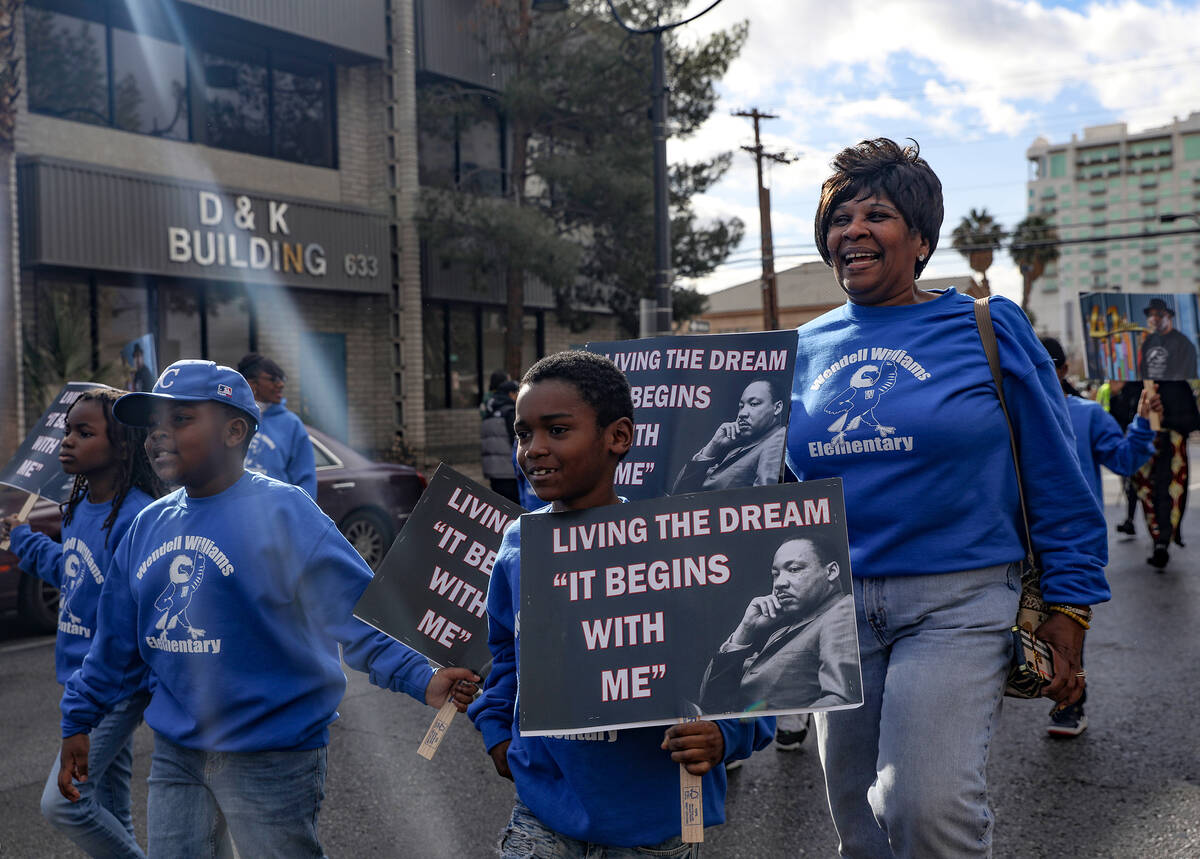 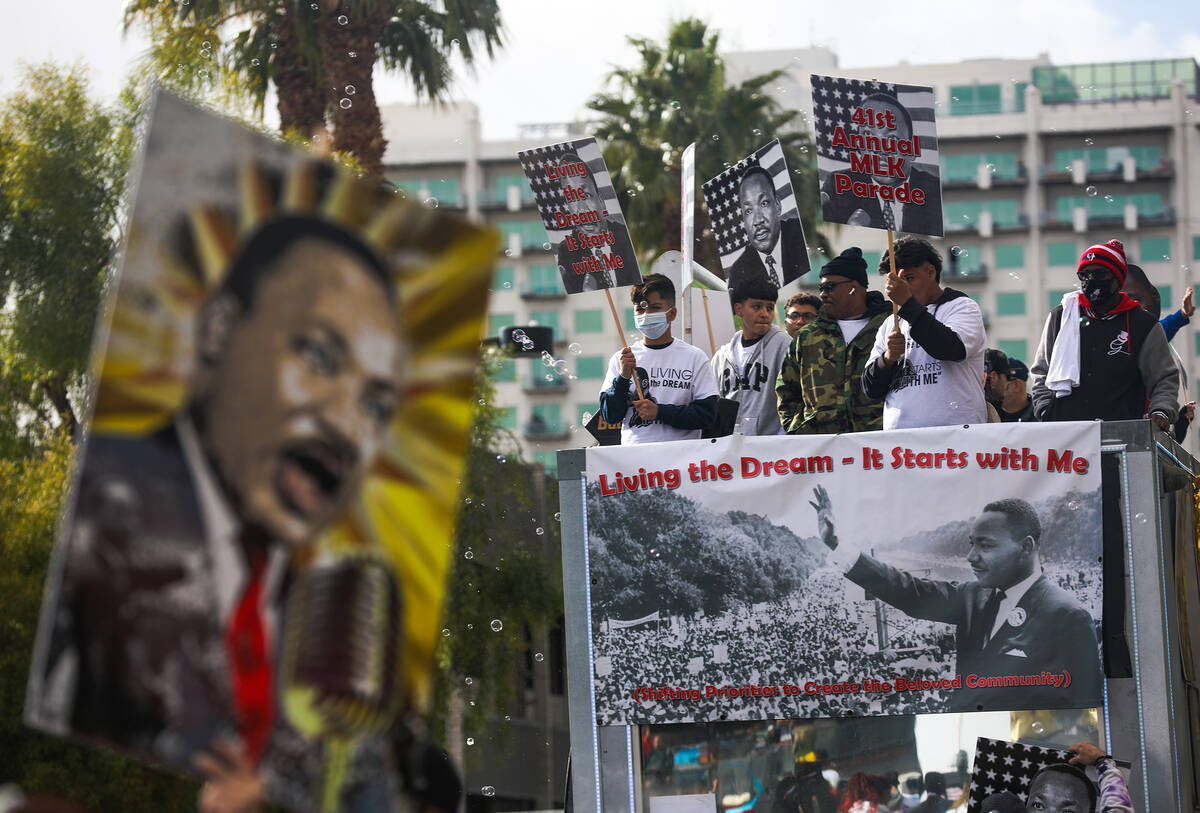 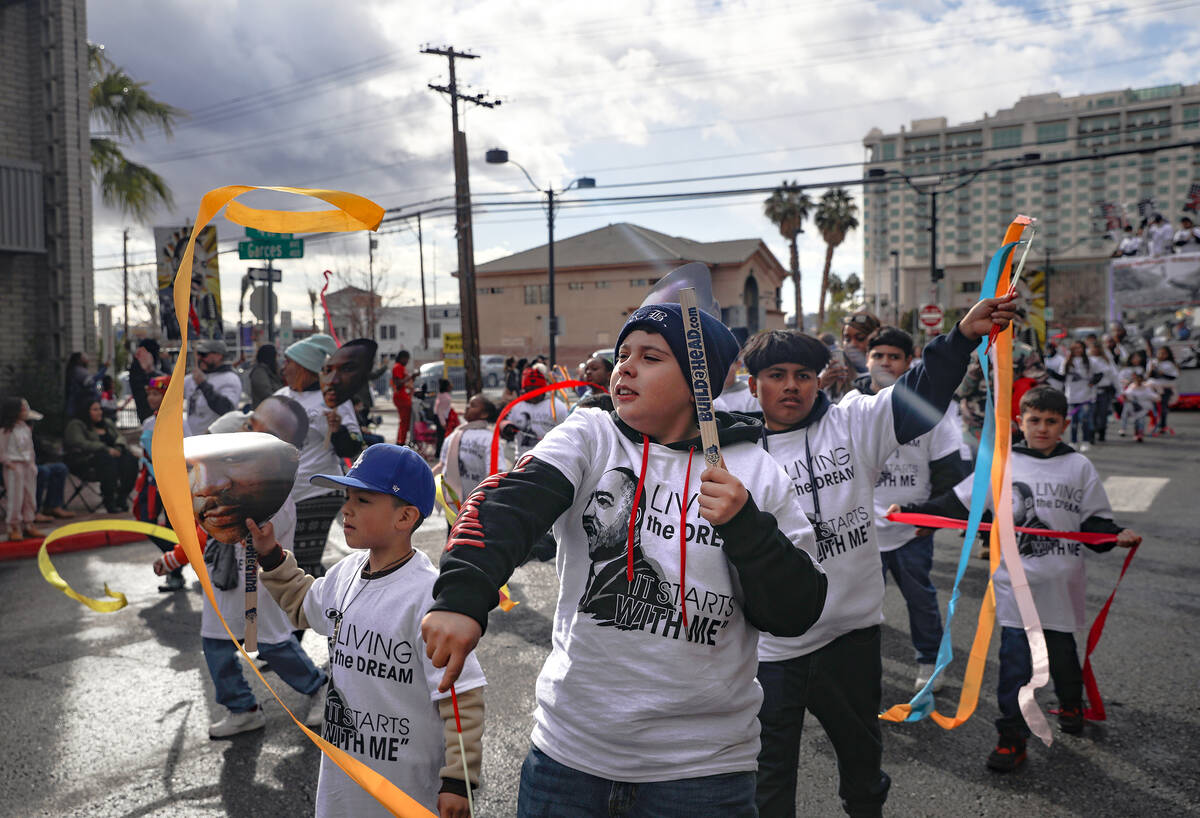 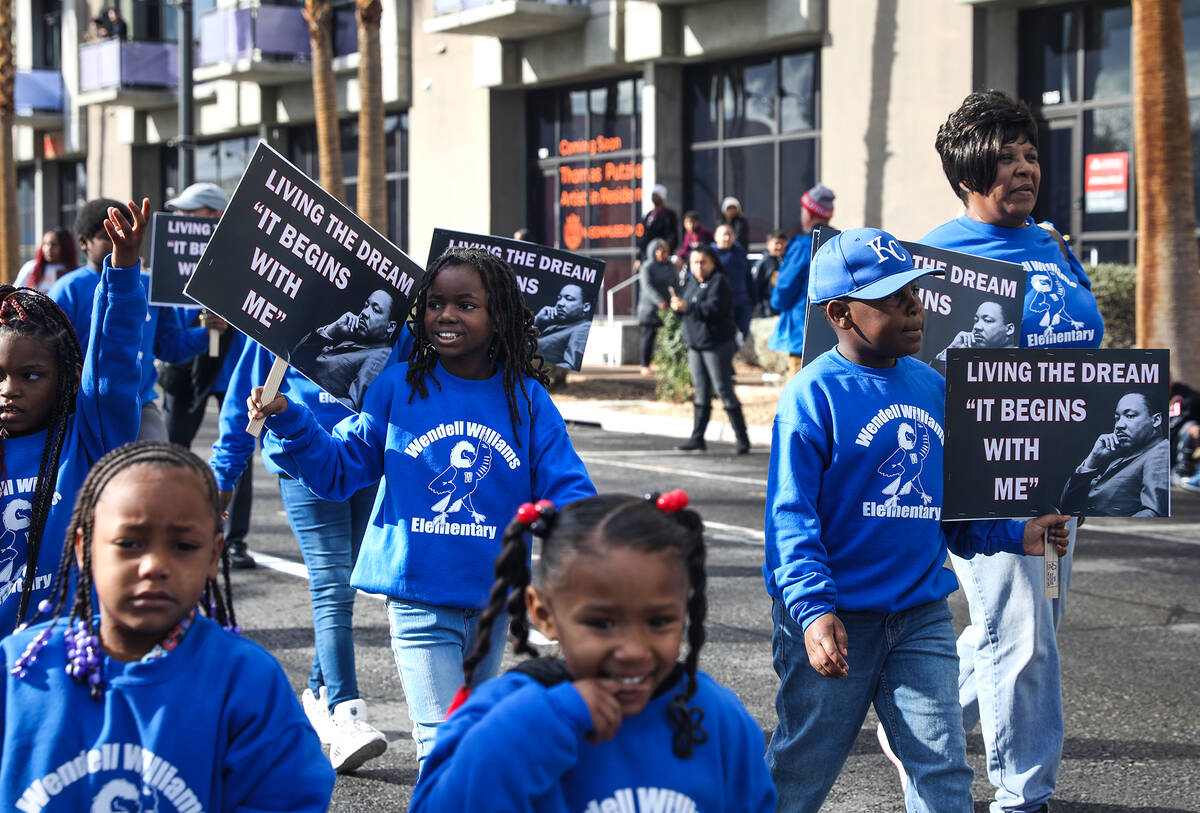 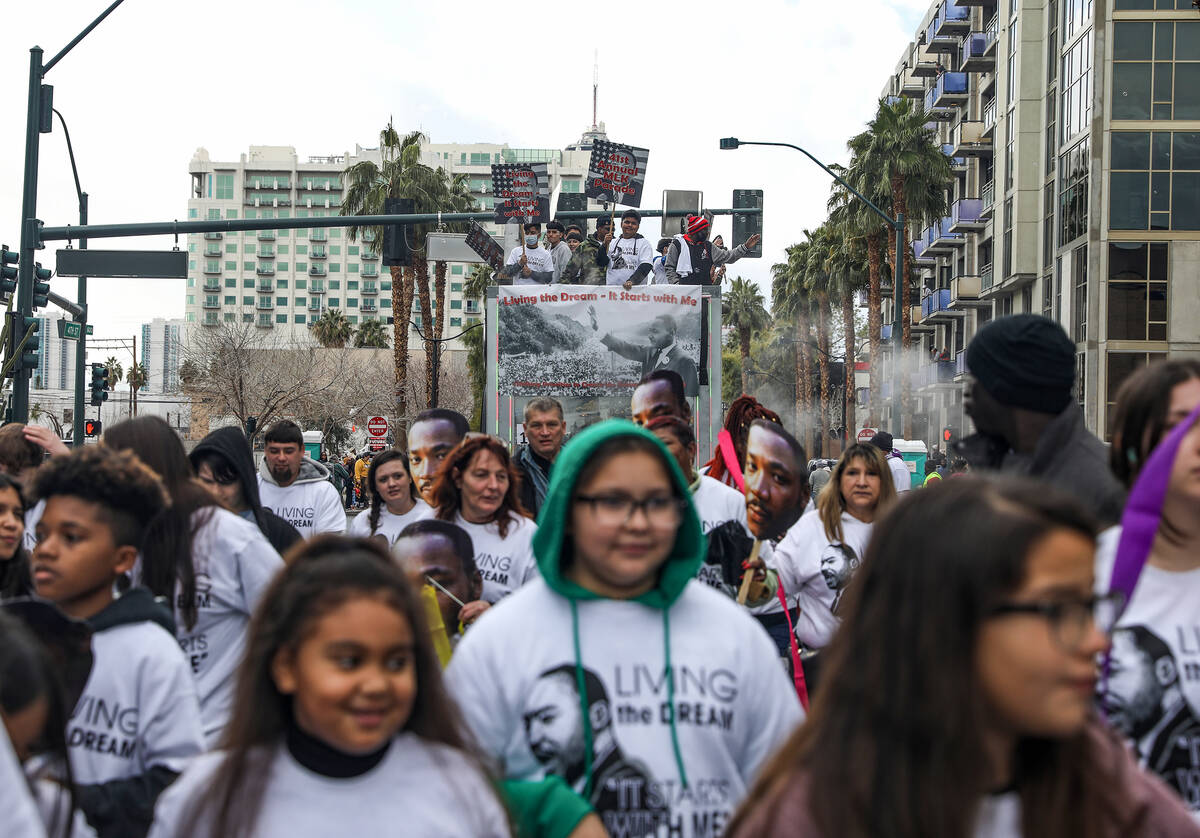 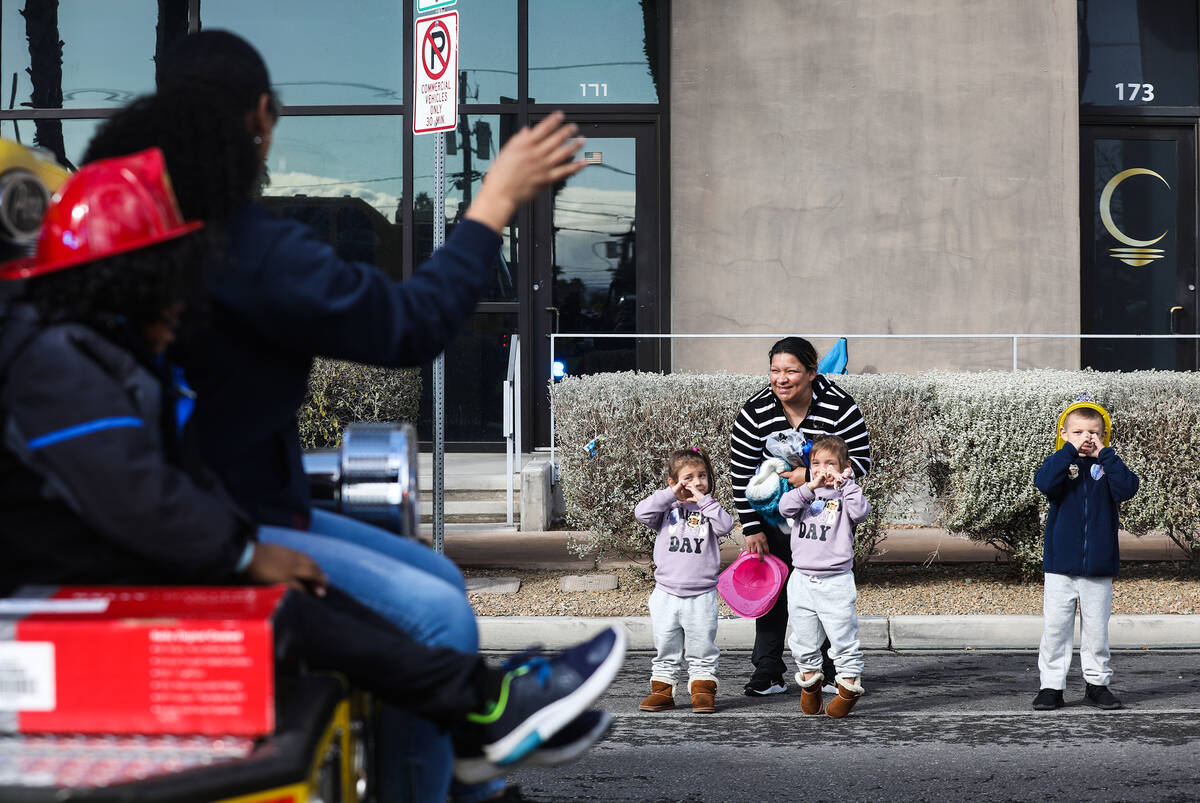 Diana Pedraza, center, stands with her twin daughters, Ava and Anaya Pedraza, 2, and her son Miguel Pedraza, 5, as they make heart shapes with their hands to floats passing by in the 41st annual Martin Luther King Jr. parade in downtown Las Vegas on Monday, Jan. 16, 2023. (Rachel Aston/Las Vegas Review-Journal) @rookie__rae 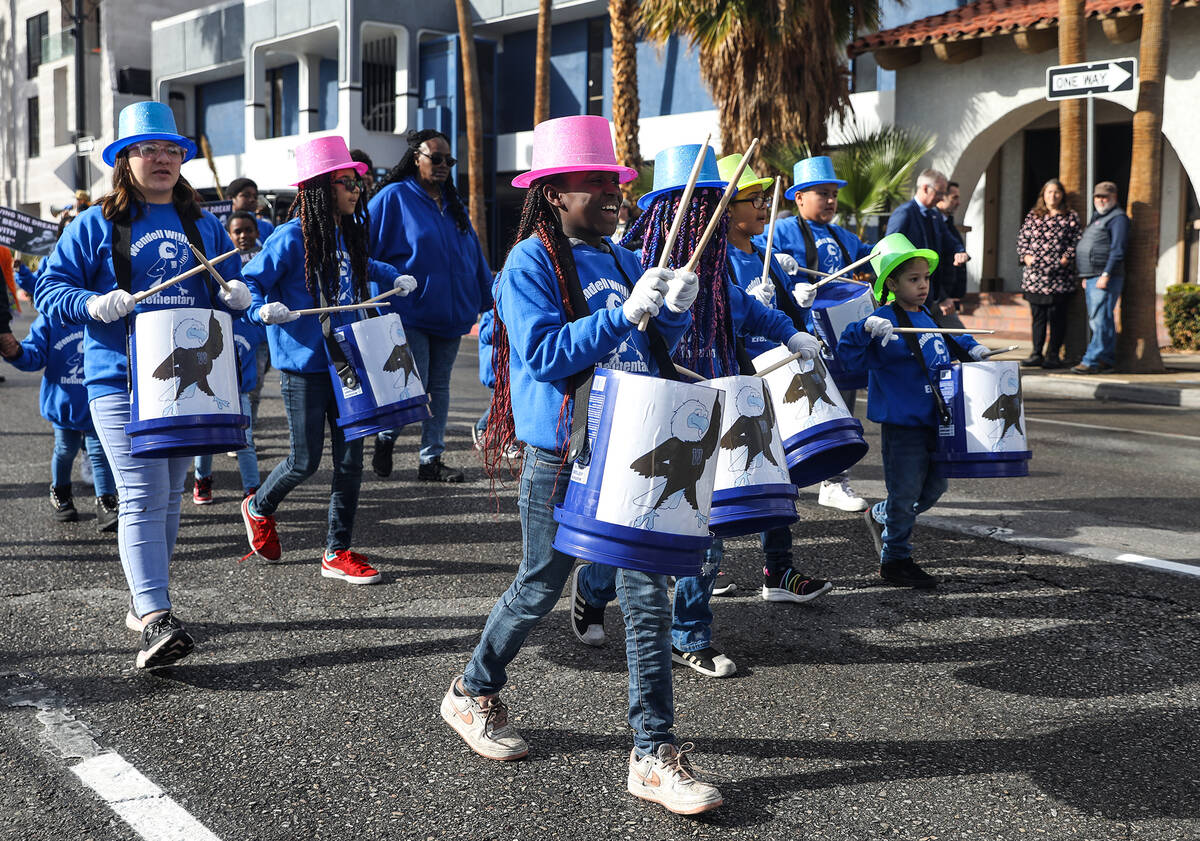 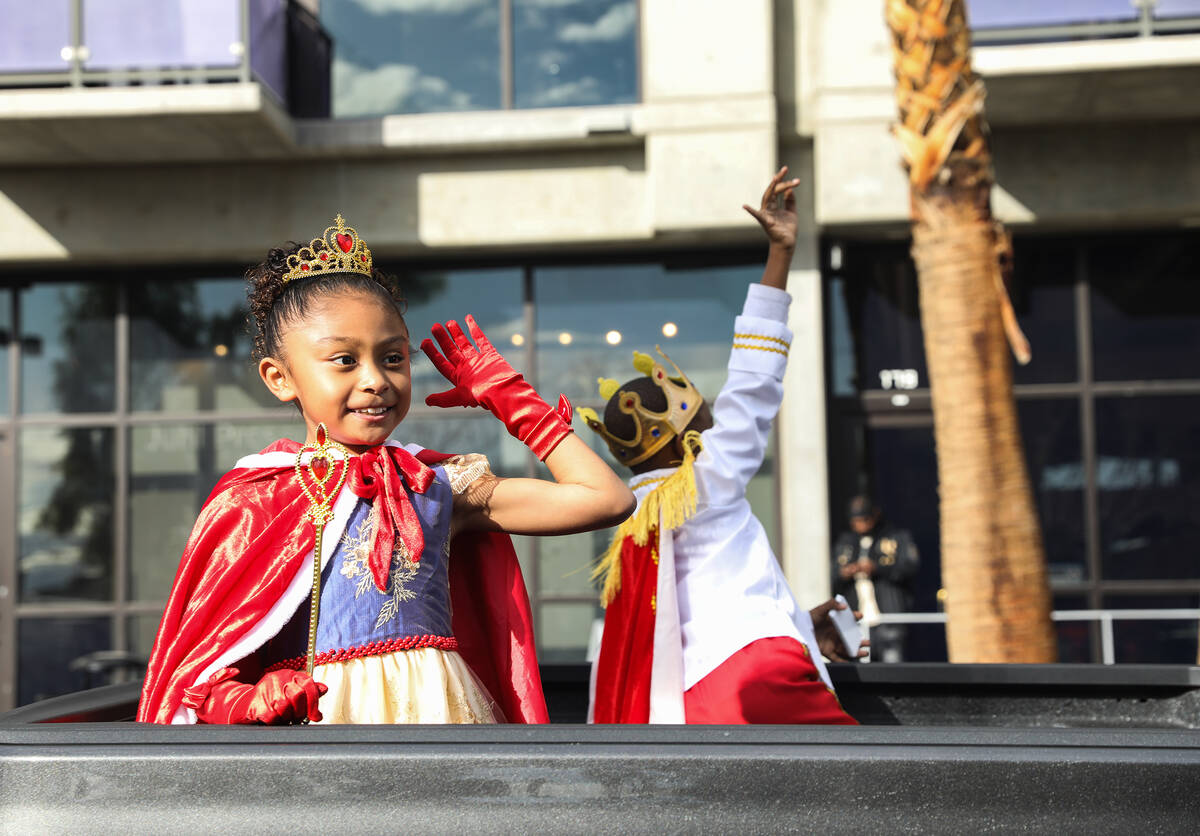 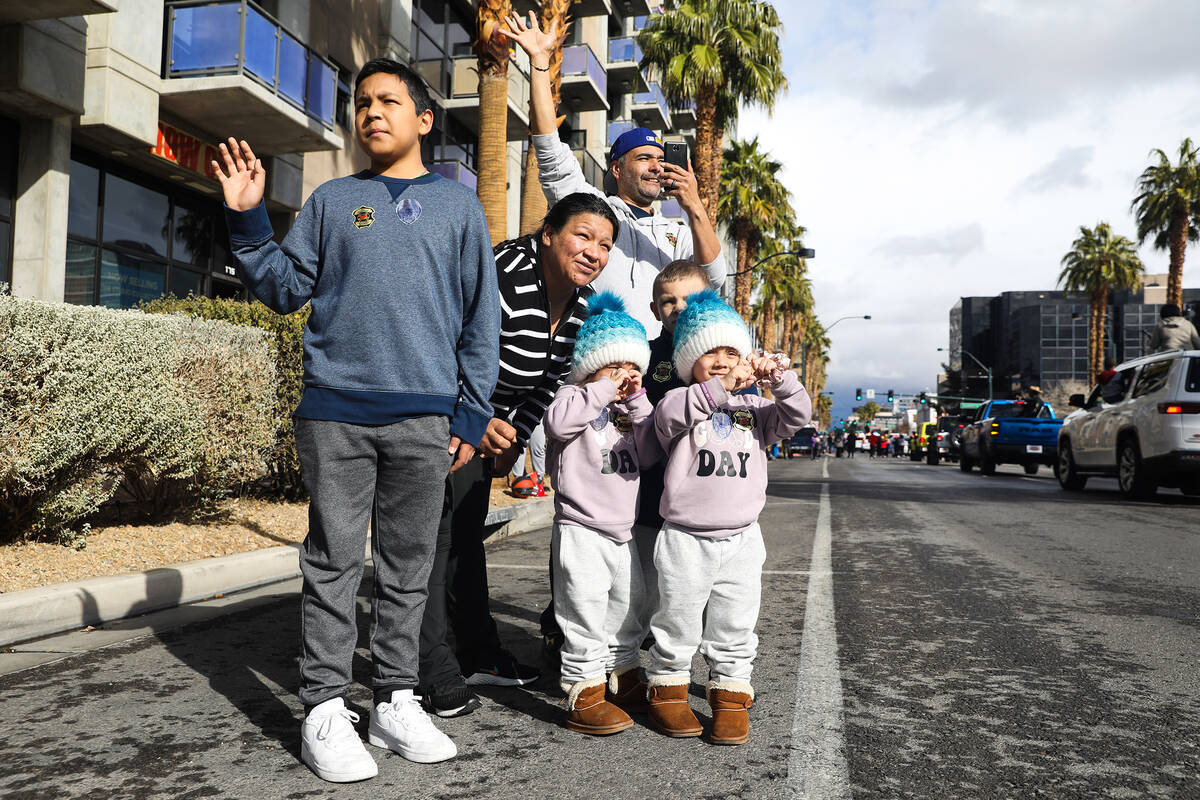 Diana Pedraza, center, stands with her twin daughters, Ava and Anaya Pedraza, 2, her son Miguel Pedraza, 5, her nephew Ronnie Gomez, 11, left, and her husband, Aldo Pedraza, behind, as they wave and make heart shapes with their hands to floats passing by in the 41st annual Martin Luther King Jr. parade in downtown Las Vegas on Monday, Jan. 16, 2023. (Rachel Aston/Las Vegas Review-Journal) @rookie__rae 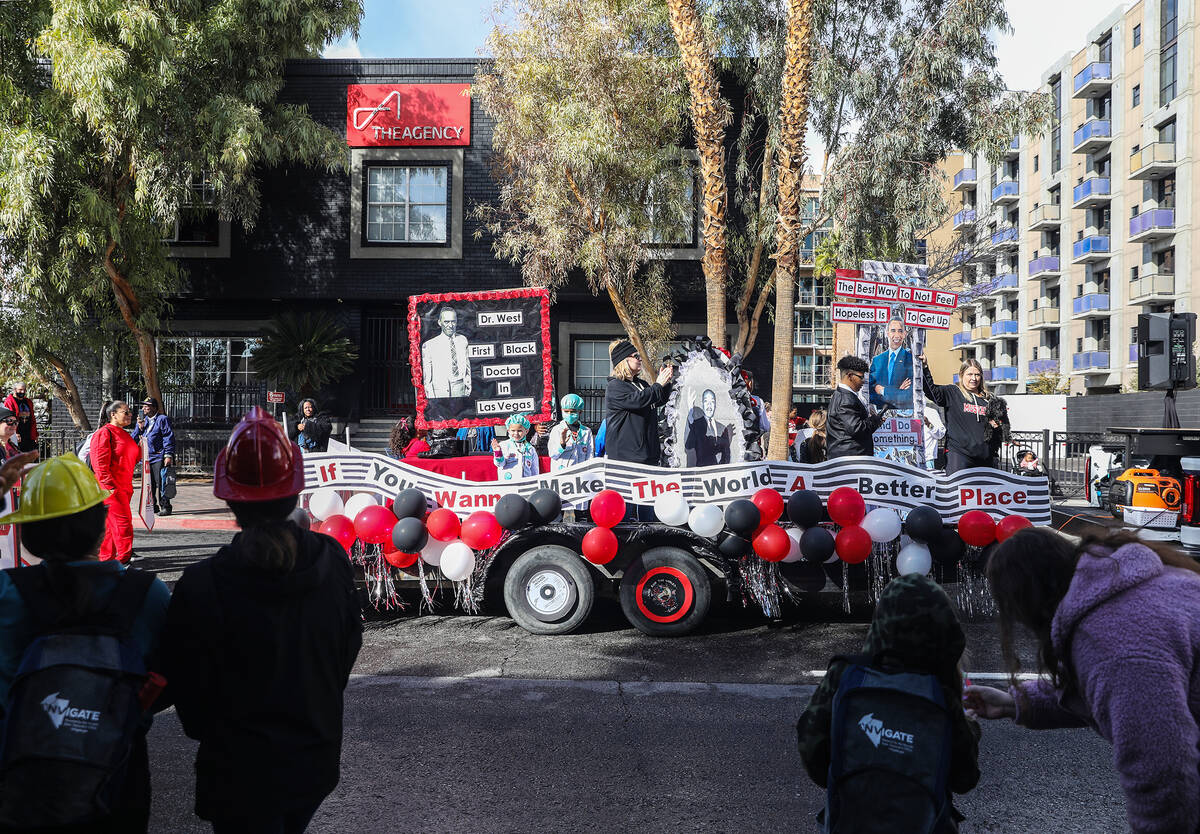 The sun emerged from behind the previous night’s rain clouds Monday morning as operators of the parade’s floats were finishing up their projects on the wet streets.

The clouds parting was a relief for several spectators lining up before the parade began.

“I was worried it was going to rain,” said Bobby Bezzelle. “That’s why I made sure to check the weather this morning before I left the house.”

The parade boasted floats ranging from cars carrying notable figures who waved to the crowd, firetrucks and police cars with wailing sirens and decorated vehicles surrounded by members of the various organizations.

Youth marshals seven-year-old Justyn Boumah and 8-year-old Ava Ramirez waved to the crowd from the bed of a truck. North Las Vegas Mayor Pamela Goynes-Brown also stood in the bed of a truck that was followed by city fire engines and police cars. Las Vegas and Henderson also showcased their police and fire departments, alongside the Clark County Fire Department.

Multiple schools showcased their students performing, with many bringing their marching bands to play music.

While the sun shone over the parade to start, the promise of rain led to a smaller turnout compared to previous years, according to some regular attendees.

The turnout “is good, especially in this weather,” said Justin Reyes, who said he goes to the parade every year. “Because I’ve seen it bigger than this before, with better weather. … It’s surprising that a lot of people still came out.”

Reyes and many of the other spectators came prepared for the elements, with many sporting umbrellas, ponchos and heavier clothing at the event.

“No I’m not worried (about the possibility of rain). I brought my umbrella just for that,” said College of Southern Nevada student Trey Barn.

Barn would later have to use his umbrella, because a light rain started coming down about an hour and a half after the start of the parade. The rain grew progressively stronger over the next two hours, peaking at a full downpour, even hailing at some points, too.

While many came prepared, the difficult weather did thin out the crowd. While many people moved to spots underneath awnings to weather the storm until it lightened, the storm proved too much for crowds of people who were forced to leave.

Despite these challenges from the elements, the parade continued and the performers on the floats did not let the harsh weather dampen their displays. Many dancers who performed behind floats kept in step, with many wearing plastic ponchos, marching bands continued to play their songs, and nearly every float continued marching forward without delay.

Throughout the parade, participants and spectators alike said the parade meant more than just a celebration.

That sense of closeness to the community was echoed by some of the spectators.

“Events like this makes it possible for us to all become one in a sense,” said College of Southern Nevada student Jonathan Hunt.

Dewayne McCoy came out to show support for Clark County District B’s float for the parade for the second year in a row. He said the “thought process” from being part of the event led to plans to make his church more truly inclusive all the time. He said this year the church will redouble its efforts for inclusivity.

“We want to give off this persona when the camera is on like we’re all unified,” said McCoy. “So what we’re trying to do this year, especially with all the politics, is show that unity every single day, and just be welcoming to everybody.”

Both spectators and participants appreciate the parade for acknowledging and celebrating the history of King and the civil rights movement. Lynn Guice said she appreciates the event for showcasing this history and ensuring that future generations learn about that history as well.