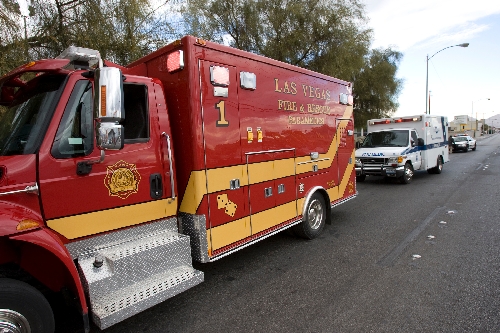 One in five parents think it’s all right to leave their children in the car “for just a minute ,” according to a 2002 poll by the National Safe Kids Campaign and General Motors.

Being left in a car with the windows up can lead to the body overheating. In Nevada, there have been 11 children since 1998 who died from being left in cars, according to a study by San Francisco State University, a total of 533 nationwide.

It’s not just the triple digits of summer temperatures that are the cause. A child left unattended in a parked vehicle is in danger any time of the year, said Tim Szymanski, Las Vegas Fire & Rescue spokesman. The department conducted it s own test a few years ago, placing a thermometer inside a vehicle that had its windows up.

“We did (the demonstration) for ABC News, they did a story on it, and the temperatures got up to a lethal level, even in wintertime,” he said.

He said that in summertime, air inside a locked car “can reach that level within four minutes.”

Since Jan. 1 , Las Vegas Fire & Rescue has responded to more than 90 incidents of children being locked in cars. Most of them were accidental lock-ins, Szymanski said, such a the wind blowing the door closed and the locks engaging, keys inside the vehicle.

In May 2004, Las Vegas Fire & Rescue unveiled a public awareness program called Heat Kills. It aimed to educate members of the public to call 911 immediately should they see a child alone in a car.

“You’re obligated to call and report it,” Szymanski said. “Metro has a zero tolerance on that.”

Why is it so important to act quickly?

Overheating the body results in hyperthermia, also called heatstroke. It occurs when a person’s temperature exceeds 104 degrees Fahrenheit and his thermoregulatory mechanism is overwhelmed. Symptoms include dizziness, disorientation, seizure, hallucinations and loss of consciousness as organs shut down.

Children’s thermoregulatory systems are not as efficient as an adult’s, and their body temperatures rise at a rate three to five times faster than an adult’s, the San Francisco State University study showed.

Nancy Harpin, registered nurse and manager of University Medical Center’s pediatric emergency department, said, “When a child has a fever, the child is heating from the inside. In this case, the body’s being heated from the outside so it’s almost like being put into an oven. The body has no chance to compensate for that … we see children with an internal temperature of 110 (after) being left in cars.”

A core body temperature of 107 degrees Fahrenheit is lethal, according to the Centers for Disease Control and Prevention. A page on its website, nhtsa.gov/people/injury/enforce/ children and cars, details how in June 2000, a mother in New Jersey left her son in the car with the windows rolled up for two hours. During that time span, she checked on him several times without realizing the temperature of the vehicle was nearing deadly . On her final check, she found her son passed out. She rushed him to the hospital, but he later died of heatstroke. An hour after his death, the boy’s body temperature was 108 degrees. The temperature outside the vehicle was in the low 60s.

San Francisco State University conducted its own study, using a 90-degree day for testing. The vehicle heated up to 130 degrees Fahrenheit within an hour, it found. The study explained how the sun’s shortwave energy heats objects that it strikes on the interior of the car. The hot dashboard, steering wheel and seats heat the adjacent air by both conduction and convection, it said, and cracking the windows has little effect.

Before the Heat Kills campaign, Harpin said, UMC was seeing three or four toddler victims a year. The devastation goes beyond the parents’ grief.

“Many of us have children; many have young children,” she said of the emergency room staff. “So it’s difficult to see because it’s totally avoidable. Here you have this perfectly healthy, normal, beautiful child who is not going to survive as a result of this.”

Keith Paul, spokesman for the Henderson Police Department, said the situation can come with legal consequences.

“We had one back in May where a woman ran into the Wildfire Casino,” he said. “Some folks saw some kids in the car … the engine was off and the windows were up. They contacted the police.”

The woman was charged, he said.

There are ways to remind oneself that a child is in the back seat. One way is to place a teddy bear or other stuffed animal on the front passenger seat. Some people tie a ribbon on their door handle. Still others make a point of placing an item they’ll need – a purse, a briefcase – in the back seat.

Szymanski has his own reminder when he drives his grandchildren.

“Put your cellphone with your child,” he said. “You’re not supposed to be touching it when you’re driving, anyway.”

For a more high-tech approach, there’s a free app for iPhones called the Baby Reminder.

Another option, the ChildMinder Smart Clip System from Baby Alert International, attaches to a child safety seat and is activated when a child is clicked in. The wireless system sounds an alert if the adult carrying the fob goes beyond a 15-foot radius of the Smart Clip. Visit babyalert.info.

Forget Me Not USA, on the Web at forgetmenotusa.com, has a petition to require car manufacturers to include a child sensor alert system in new vehicles.

Anyone who sees a child left in an unattended vehicle should not think twice about calling 911, Paul stressed.

“We would rather go there and it be a false alarm than not get called,” Paul said.