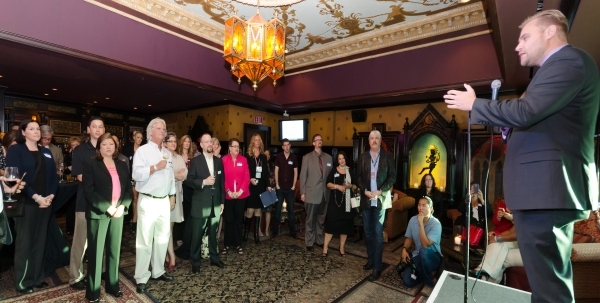 Nominations are being accepted for the third annual Las Vegas Women in Technology Awards presented by the Las Vegas Community Tech Fund, HiTech Vegas LLC and WomenAdvancing. The organizers want to make it clear that they haven’t created a separate platform because they don’t believe they can compete with men but because they want to change the perception of women in Las Vegas.

“It’s more about supporting women in the community,” said Melissa Skipworth, co-founder of the Las Vegas Women in Technology Awards and WomenAdvancing chapter lead. “It’s about showing everyone that Las Vegas isn’t just nightlife and things like that.”

The public is invited to nominate women who are advancing technology or using technology in a unique way. The awards will be presented to five women representing technology industries, including: Robotics; Information Technology (IT); Computer Engineering; 3D Printing; Robotics; New Technology Products; Tech Startups; and Tech Entrepreneurs. Nominations are being accepted online through April 15 at vegaswomentechawards.net.

“What would qualify a woman can be kind of blurred — if a woman is using technology in a creative way to empower other women business professionals, (or) someone might have invented some incredible technology that is saving lives,” Skipworth said. “We won’t know until we see all the entries, and there are quite a few of them coming in.”

The organizers noted that in the past 10 years, growth in science, technology, engineering and math (STEM) jobs has been three times greater than non-STEM jobs. While women comprise 48 percent of the U.S. workforce, 24 percent are in STEM fields, a statistic that has held constant for nearly the last decade, according to Million Women Mentors, an online initiative aimed at garnering support for women in STEM fields through mentoring.

“There are a lot of incredible women working in Las Vegas in tech fields and using technology in creative ways,” Skipworth said. “We hope to encourage women in STEM jobs by honoring them with these awards for the Las Vegas community. We hope to instill in youth that women can be successful working in tech fields. We also want to create a community of women and men who want to support an awareness program like this and watch it grow and develop.”

The organization is seeking corporate sponsors to support the awards monetarily or through volunteer work. Last year’s included Zappos, the College of Southern Nevada, Luckygirl Designs and Aruze Gaming.

The awards took place last year in the Foundation Room at the House of Blues in Mandalay Bay. This year’s site hasn’t been chosen yet.

“Several places have offered space, but we’re still undecided where to do it,” Skipworth said. “We have a lot of options, and that’s nice. We’re looking at a date in mid- to late May and hope to announce the time and place soon.”

Nguyen explained that the awards don’t only benefit the winners but the community, too.

“Yes, we want to recognize women and their accomplishments,” she said. “But we also have a second focus, which is encouraging and doing cross-promotion and support of many of the technology programs that exist in the valley.”