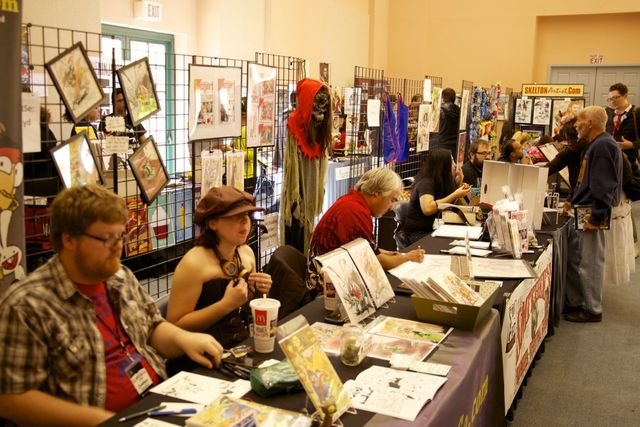 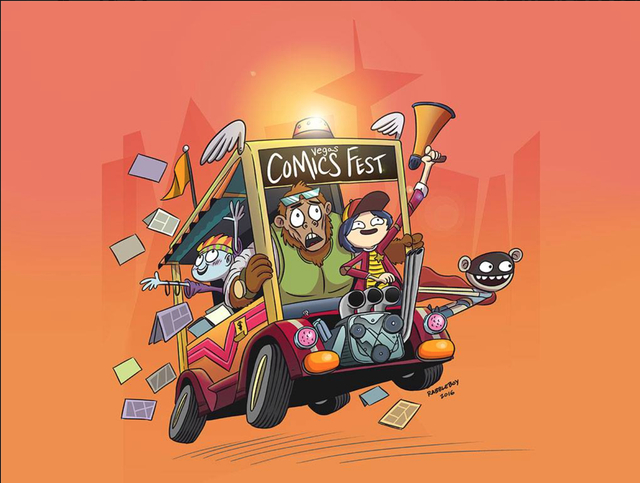 Local comic book creator and author/illustrator Kenneth Lamug, aka RabbleBoy, was selected as this year’s poster and pin artist for the Vegas Valley Comic Book Festival. (Special to View) 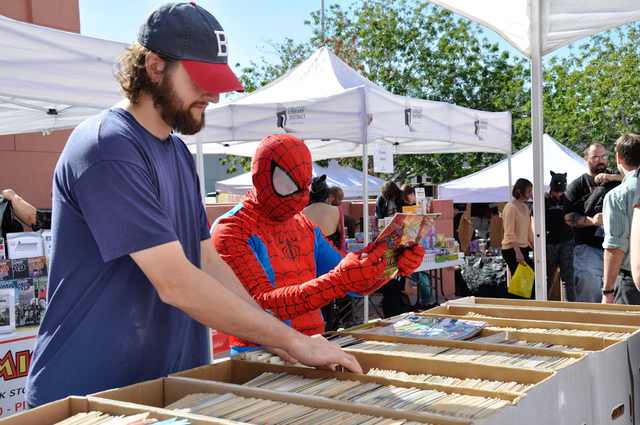 Patrons check out the Vegas Valley Comic Book Festival in this undated photo. (Special to View)

“We really do try to present a little bit of something for everyone,” she said. “It goes from featuring things from pop culture-ish to things that are scholarly. It’s not just one thing. It’s a mishmash, or a rainbow, of many different things.”

While most of the main event’s action is slated to be in the library’s theater area, visitors will find activities throughout. Even outside, a comic marketplace will spill into the courtyard, and food trucks are set to be along the street.

Adults and teens can explore art, writing and comic history with panel discussions and workshops, while kids may enjoy crafts, face painting, scavenger hunts and cosplay.

“The last couple of years, people have been cosplaying, which we highly, highly encourage,” Scott said. “Usually what I tell people is, if you’ve got your costume from Halloween, especially the little kids, it’s a great chance to reuse it. Come out and shine.”

Fest fans can look forward to returning talent such as Professor Ben Saunders, founder of the University of Oregon’s undergraduate minor in Comics and Cartoon Studies, and Amy Chu, co-founder of Alpha Girl Comics and writer for DC Comics’ Poison Ivy series.

“But we also have a lot of great new people that we haven’t ever had,” Scott said. “People like James Robinson and J.H. Williams III, internationally known comic book people who both happen to live in town.”

Williams, an Eisner Award-winning comic book artist, is best known for his work on Batwoman, Promethea, Desolation Jones and The Sandman Overture. The Will Eisner Comic Industry Awards are considered to be the comic book world’s Oscars.

Robinson, an Eisner Award-winning writer, has spun tales for everyone from Batman and Superman to Green Lantern and Hawkman.

Best known for helping to revive and reimagine the Golden Age character Starman, Robinson is also the screenwriter for the 2003 comic book-inspired film, “The League of Extraordinary Gentleman.”

Speaking of film, festival highlights include a screening of the documentary “Neil Gaiman: Dream Dangerously,” featuring a question-and-answer session with filmmaker Patrick Meaney.

Scott said for the first time, the festival is expanding into manga and anime with Deb Aoki leading discussions for fans, as well as newcomers.

Other highlights include a discussion with Betsy Gomez and Katherine Keller about the successful Kickstarter-funded book “She Changed Comics,” designed to share the stories of more than 60 women whose work changed the landscape of free expression in the comic industry. Jason Copland is scheduled to join Robinson and Chu in a discussion on building a career in comics. Fans of “Jay & Miles X-Plain the X-Men” are set to be treated to a live edition of the popular podcast, and budding artists can learn to draw Deadpool.

All ages can also draw throughout the day in the artist jam assisted by Spencer Brinkerhoff III.

Local art will be used to promote the festival. Kenneth Lamug, aka RabbleBoy, was selected as this year’s poster and pin artist. Ramsey Hong and Nicole Ellison’s works were chosen for scavenger hunt and VIP rewards.

Lamug said he’s excited to be chosen as the featured artist. He’s been coming to the festival since 2012 and admires the entrepreneurial spirit he sees in comic book creators.

“If they want something created, they do it themselves and don’t wait for gatekeepers to tell them yes or no,” he said. “That’s the direction we are moving with self-publishing and crowdfunding, and I hope that the little kids who go to the events will also be encouraged to create and share their own stories. There are no barriers anymore.”

Music is also a big part of the festivities. Scott said it was F. Andrew Taylor, Vegas Valley Comic Book Festival board member and View staff writer, who suggested bringing in The Velveteen Band, a group led by Baron Von Velveteen, a 6-foot-tall trumpet-playing rabbit, backed up by hand puppets on vocals.

Taylor said he saw the band perform at local steampunk conventions and was amazed at how the group got the crowd up and dancing to original music, covering hits such as the love song from the film “Labyrinth.”

While this isn’t the Baron’s first gig in Nevada, Taylor said, “It’s only the steampunk crowd that has seen them before.”

The Velveteen Band is set to take the stage again during Geekpalooza joined by 3D6, Super Zeros, Decaying Tigers and the multitalented Koblish.

“Not only is he a comic book person, he plays guitar and sings,” Scott said.