Walker Lane is home to hundreds of faults responsible for a great deal of earthquake activity in the Southwest.
By Marina Philip Las Vegas Review-Journal
July 6, 2020 - 3:56 am 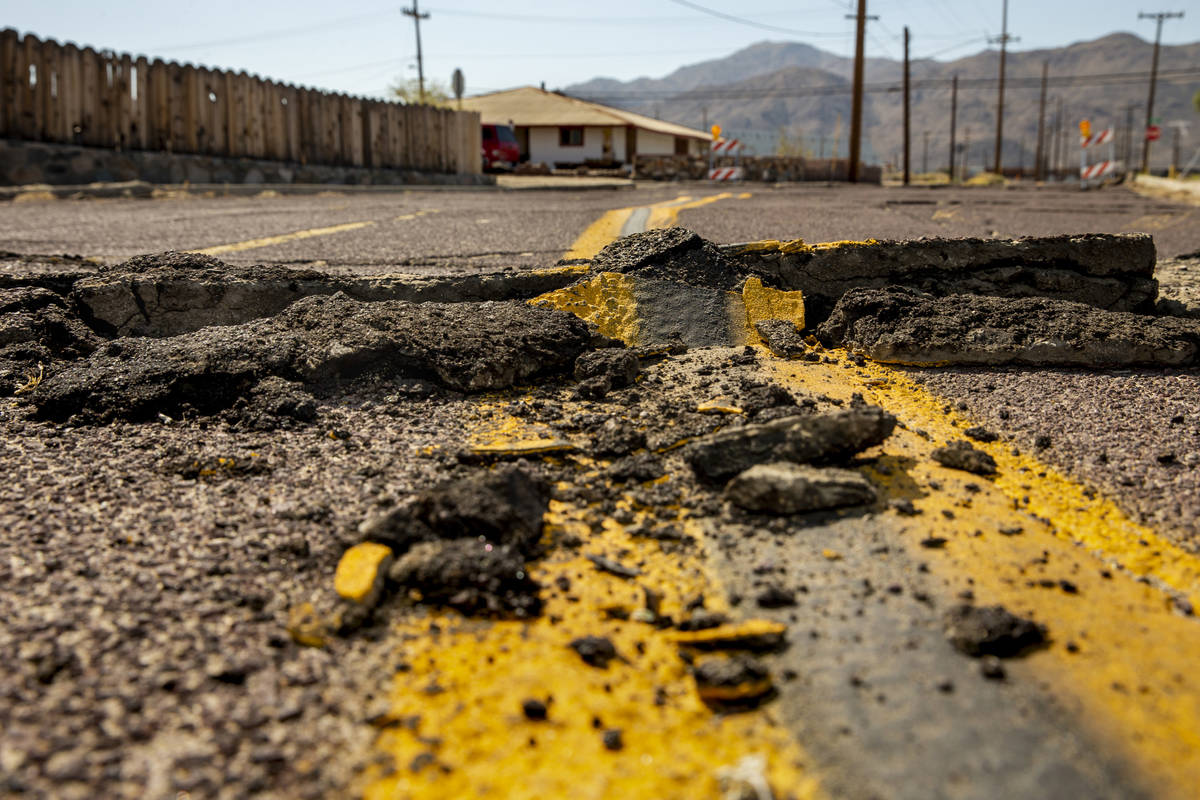 Extensive cracks with shifting pavement have opened up and forced road closures in Trona, California, because of earthquakes on Saturday, July 6, 2019. (L.E. Baskow/Las Vegas Review-Journal) @Left_Eye_Images 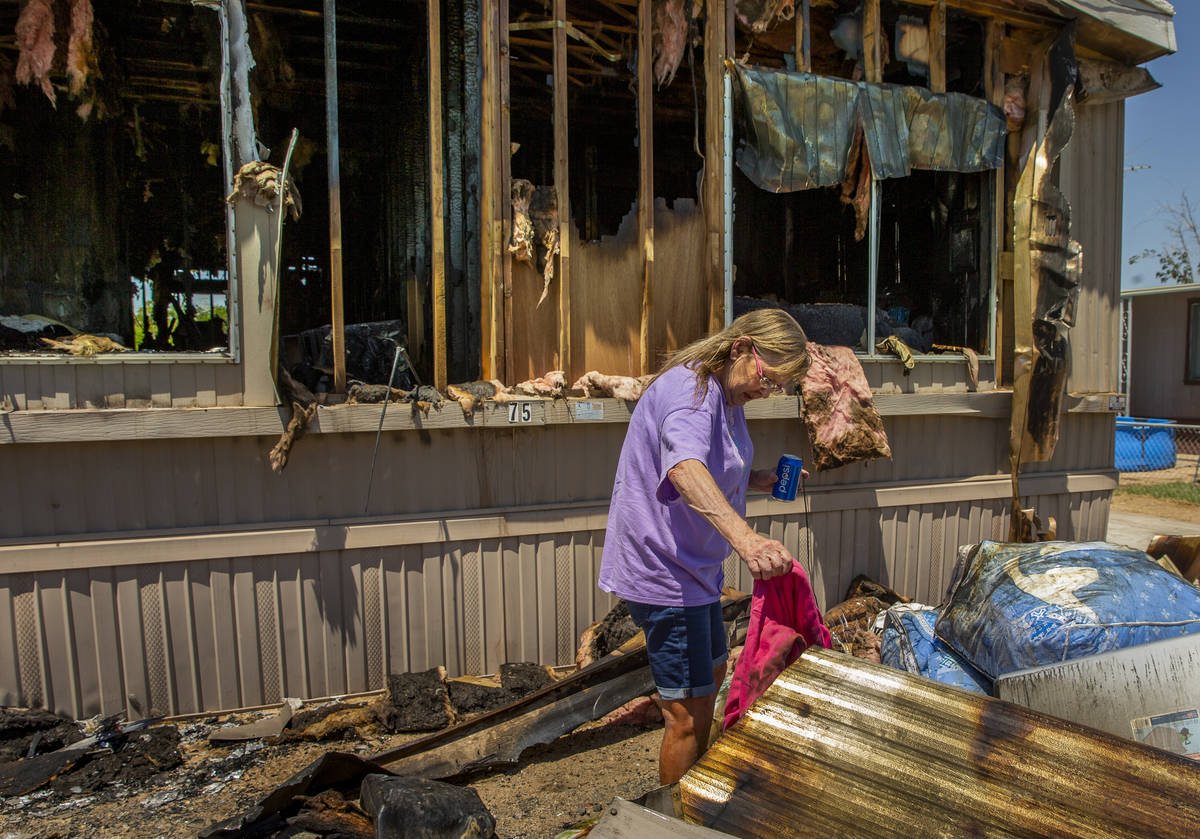 Claudia Arevala sorts through the remains of a fire in her home at the Town and Country Mobile Home Park following two earthquakes on Saturday, July 6, 2019, in Ridgecrest, California. (L.E. Baskow/Las Vegas Review-Journal) @Left_Eye_Images 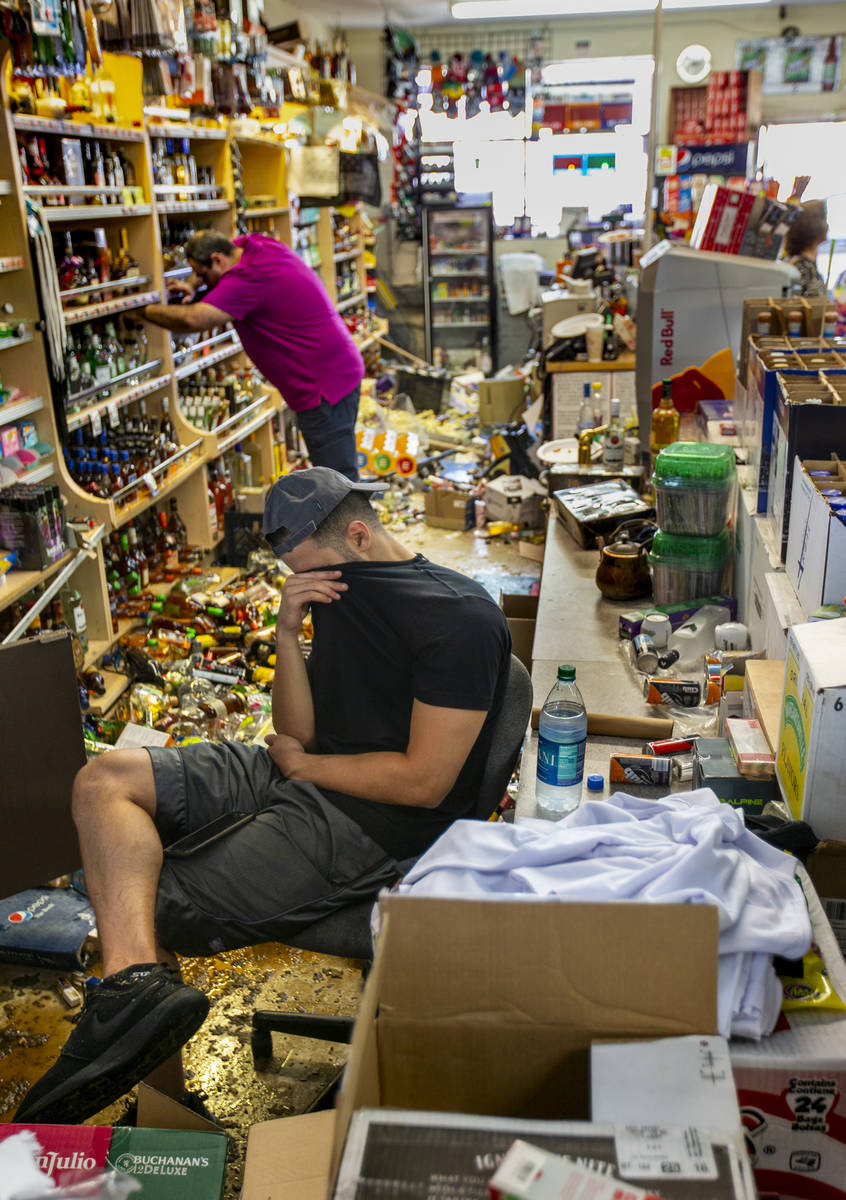 Ziad Abdullatif of the Eastridge Market liquor store is tired but still helping to run the family store after their shop sustained serious damage on the east end of Ridgecrest following two earthquakes on Saturday, July 6, 2019, in Ridgecrest, California. They have cleaned up several times now and are slowly at it again. (L.E. Baskow/Las Vegas Review-Journal) @Left_Eye_Images 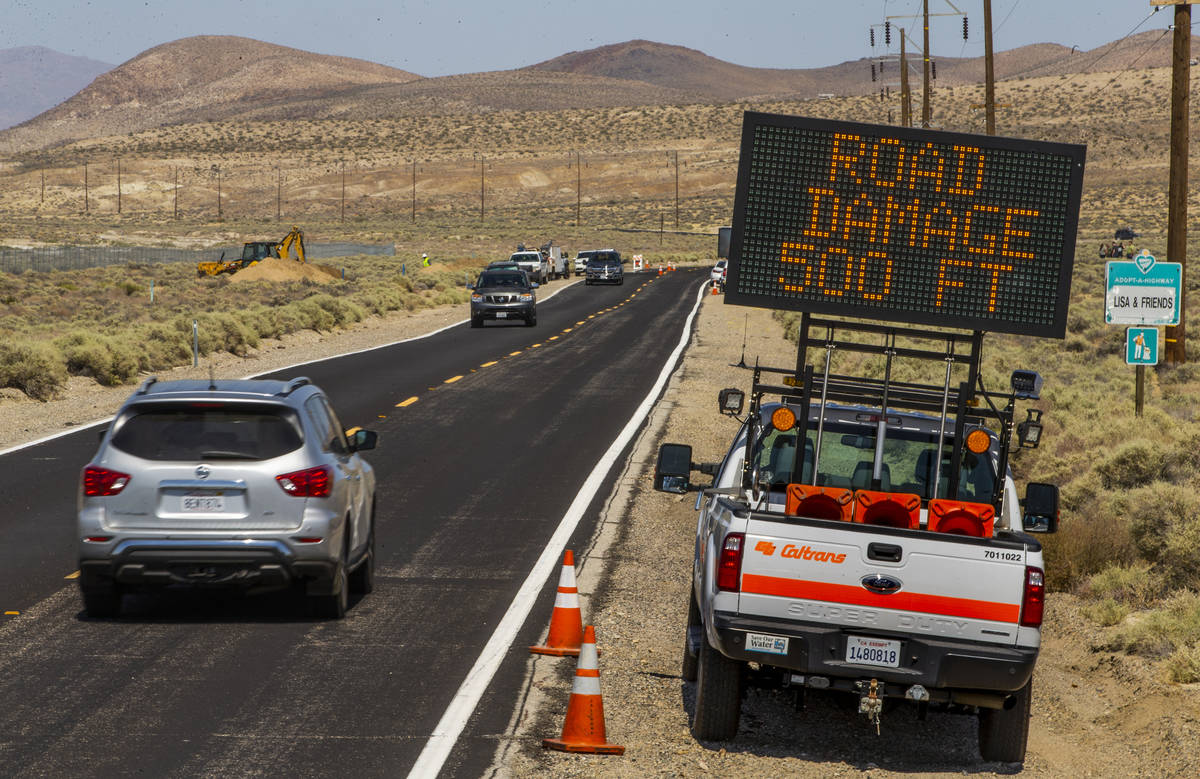 Caltrans workers have already patched some of the extensive cracks with shifting pavement that have opened up due to the earthquakes along Hwy 178 between Ridgecrest and Trona, California, on Saturday, July 6, 2019. (L.E. Baskow/Las Vegas Review-Journal) @Left_Eye_Images 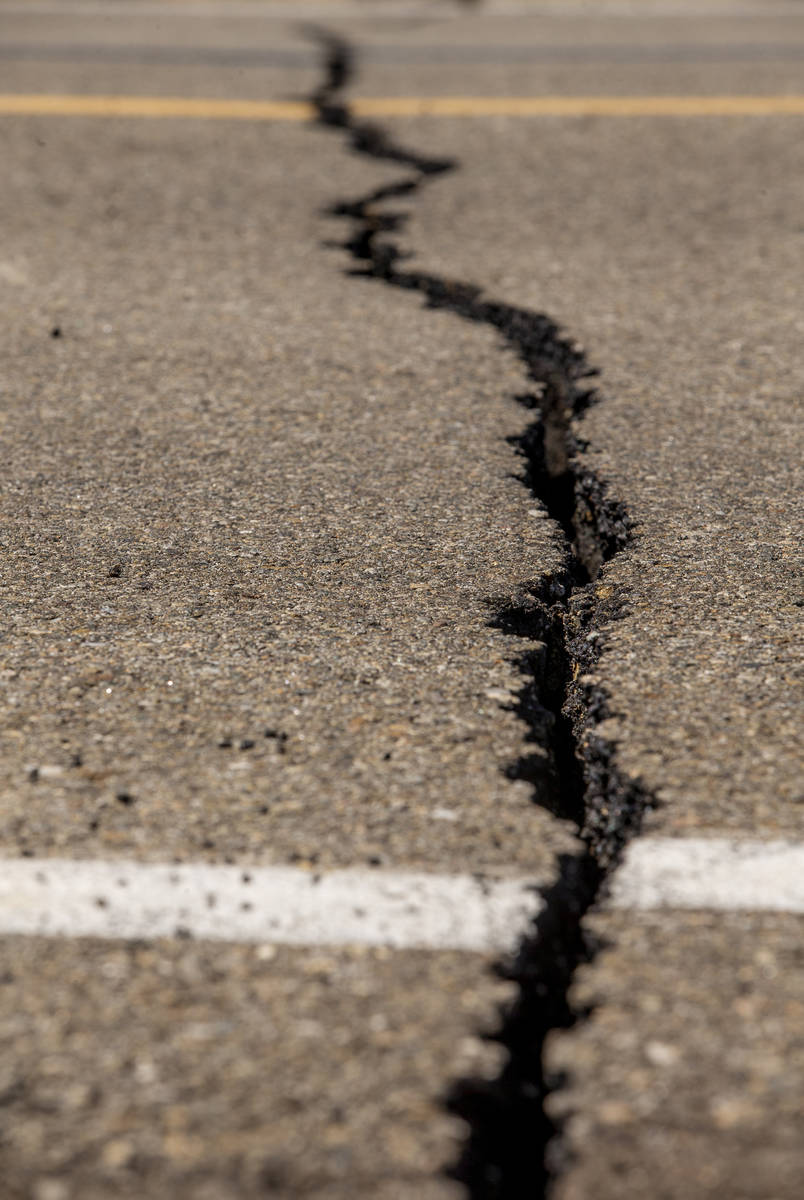 Caltrans workers continue to monitor the extensive cracks with shifting pavement that have opened up due to the earthquakes along Hwy 178 between Ridgecrest and Trona, California, on Saturday, July 6, 2019. (L.E. Baskow/Las Vegas Review-Journal) @Left_Eye_Images 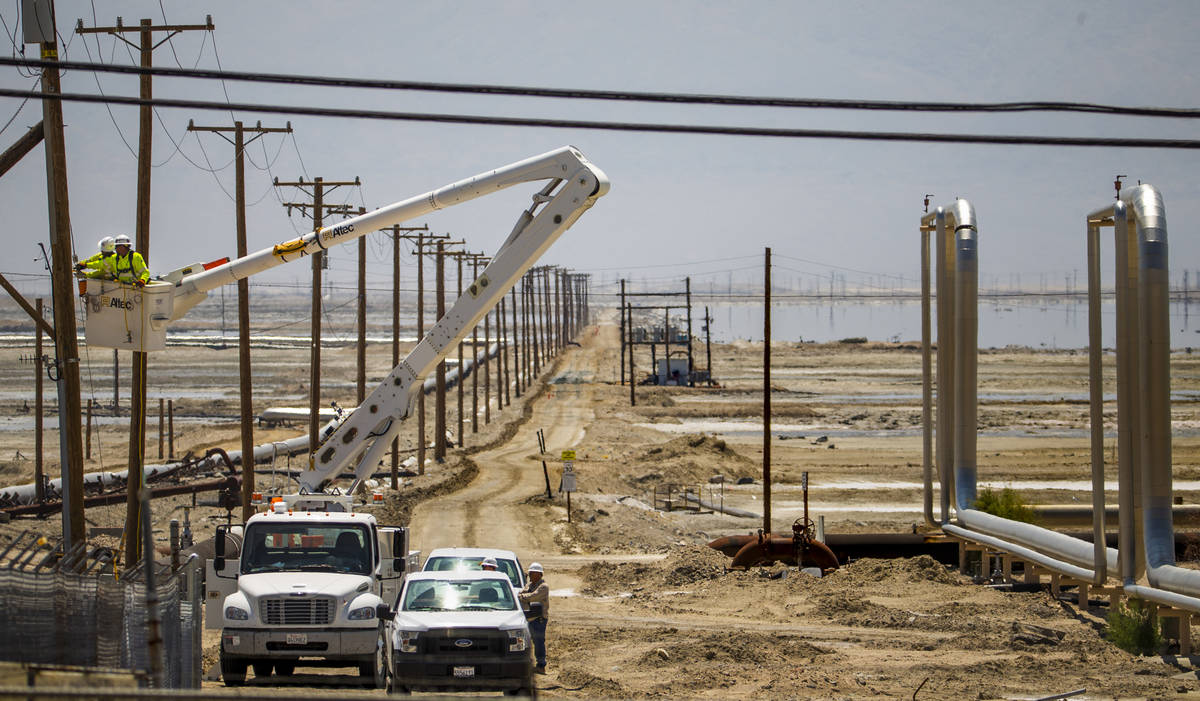 A Southern California Edison crew works to repair the power lines near the Searles Valley Minerals Westend plant in Trona, Calif.,Sunday, July 7, 2019. Power to the town was out again today for over four hours. (L.E. Baskow/Las Vegas Review-Journal) @Left_Eye_Images 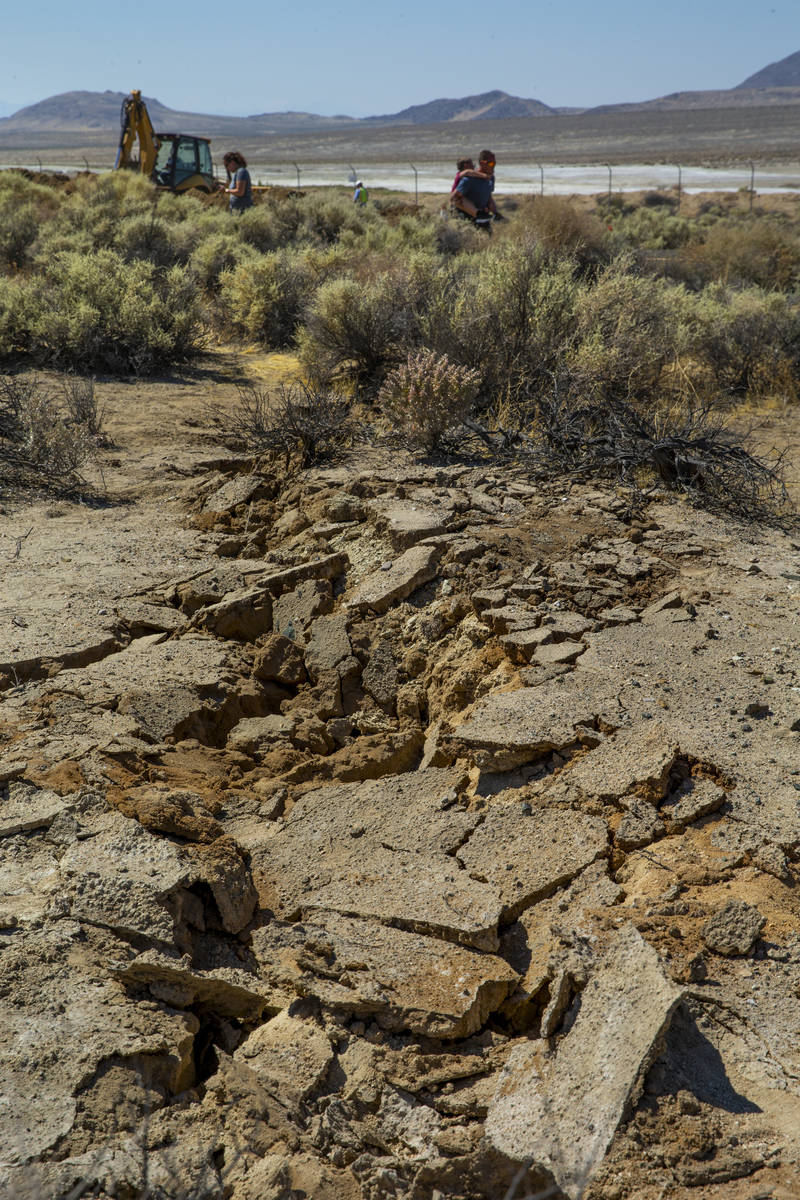 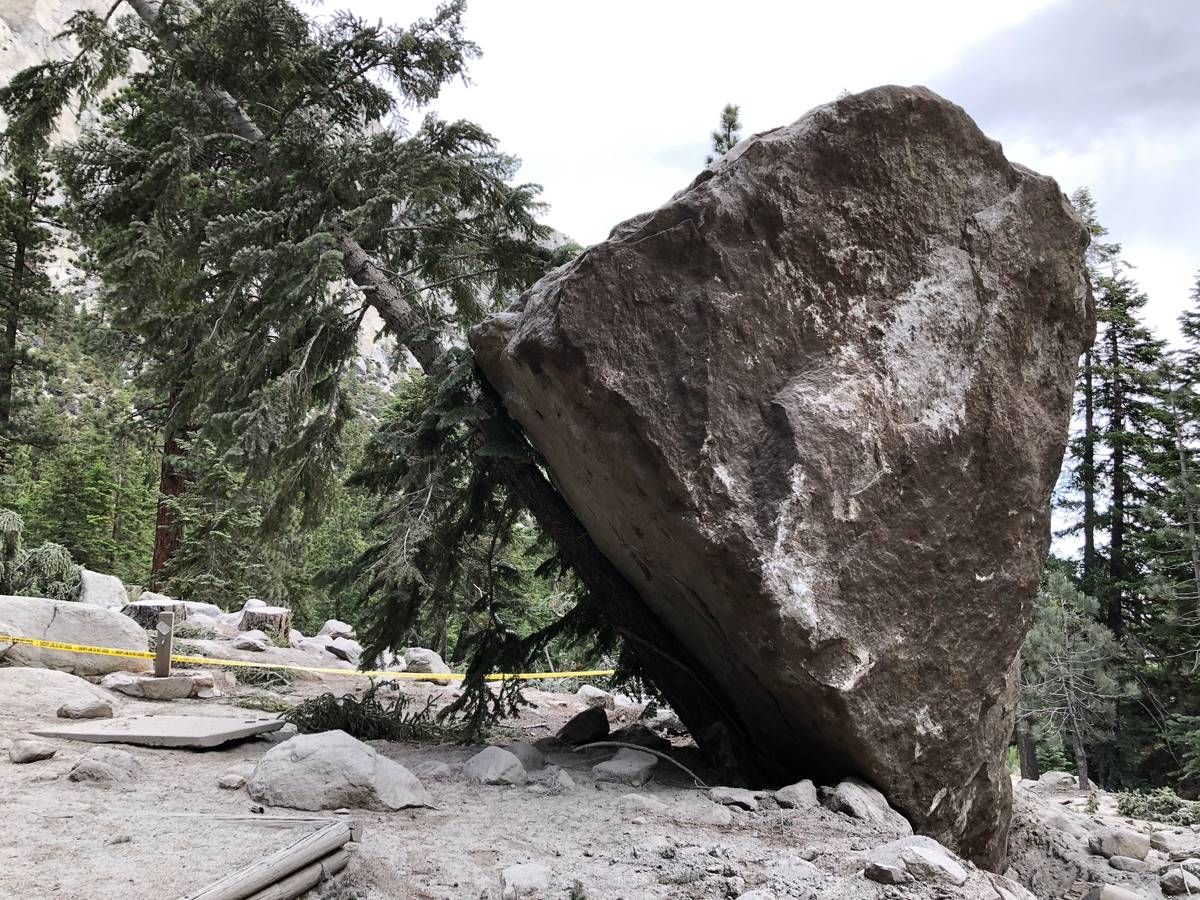 A nearly 20 ft diameter boulder launched into a Whitney Portal campground during an earthquake in Owens Valley, Calif., on Wednesday, June 24, 2020 at 10:40 a.m. No one in the area was harmed, according to officials. (Brian Olson/California Geological Survey) 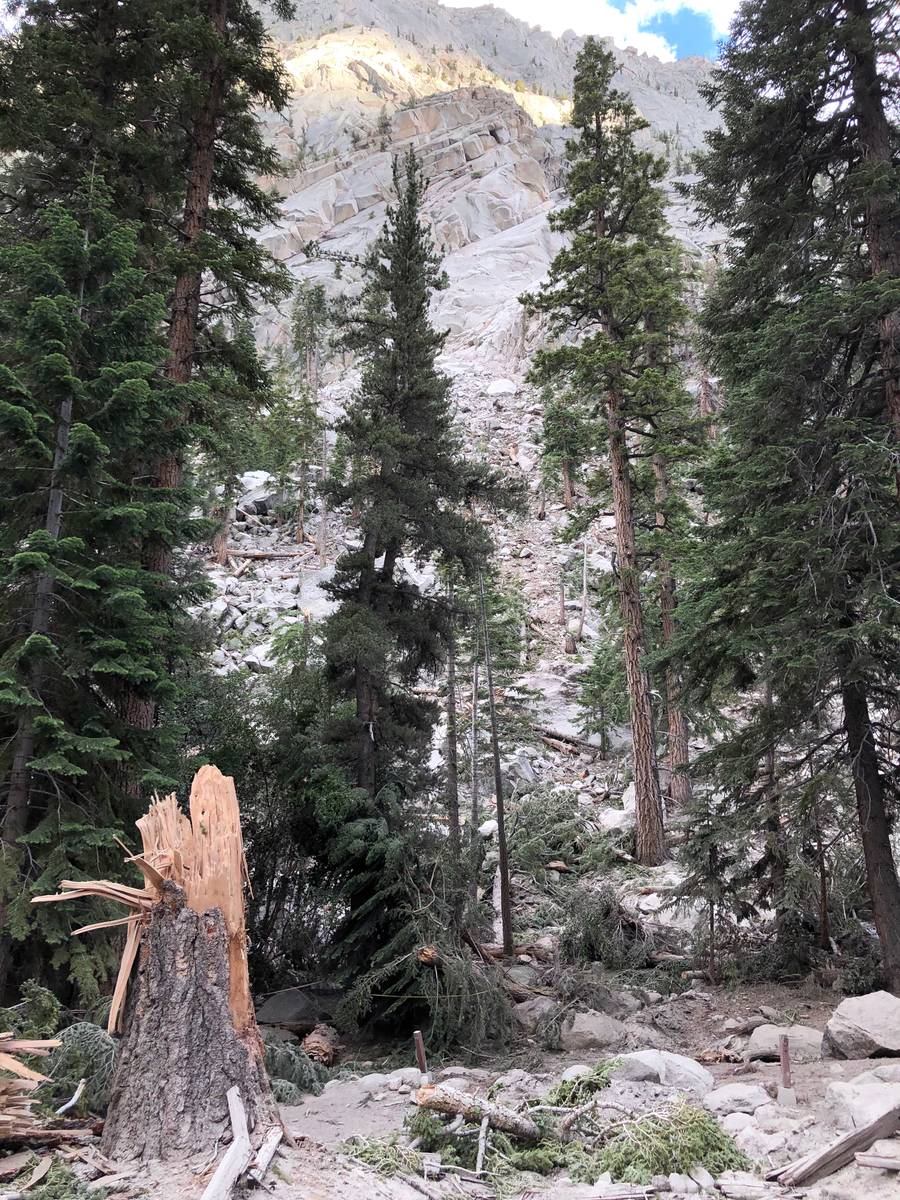 A 20 ft boulder descended 700 ft into a Whitney Portal campground during an earthquake in Owens Valley, Calif., on Wednesday, June 24, 2020 at 10:40 a.m., flattening a tree on the way and finally stopping at a nearby pine tree. (Brian Olson/California Geological Survey)

A single pine tree may have saved campers in California after a June 24 earthquake in Owens Valley by stopping a 20-foot diameter boulder from barreling deep into a campground after plunging 700 feet down a mountain.

The boulder passed through an empty campsite and flattened at least one other tree on the way down, said Brian Olson, an engineering geologist with the California Geological Survey who documented the earthquake’s aftermath on Twitter. He said the boulder appeared to have passed between two other campsites before it stopped.

“It happened in the afternoon (when) most people aren’t in camp,” Olson said. “But had anyone been there in that camp, it would have been deadly.”

The late-morning earthquake was one of at least three centered near the California-Nevada border that were felt in Las Vegas and other parts of of the Silver State in the past year. The 6.5 magnitude Monte Cristo earthquake on May 15 about 35 miles from Tonopah was felt in both Reno and Las Vegas; a 7.1 magnitude earthquake in Ridgecrest, California, shook Las Vegas in July 2019, as did a foreshock the preceding day.

The burst of seismic activity in a state that many residents mistakenly believe is relatively stable, geologically speaking, raised eyebrows and questions each time the earth moved. Where are these earthquakes coming from, many wondered, and why now?

The answer lies in Walker Lane, a region of seismically active fault lines hugging the border between California and Nevada. Spanning 620 miles from the Mojave Desert to Northern California and about 60 miles wide, the region is home to hundreds of faults responsible for a great deal of earthquake activity in the Southwest.

A less renowned younger neighbor of the San Andreas Fault, Walker Lane has a long history of triggering earthquakes in Nevada, the third-most seismically active state in the country after California and Alaska. The faults in the Walker Lane have been the epicenters of major earthquakes, including last year’s Ridgecrest earthquake, a series of serious earthquakes in Nevada in 1954 that hit some areas multiple times, and an earthquake in California’s Owens Valley in 1872. The latter, estimated to have been about magnitude 7.8, leveled the town of Lone Pine and killed 27 people.

The June 24 quake that made buildings sway and swimming pools splash in Las Vegas also was located on the Owens Valley Fault System and was estimated at 5.8 magnitude. It also rattled the rebuilt Lone Pine, east of the Sierra Nevada, causing rock slides but little damage.

But things could have been far worse if that well-placed tree hadn’t stopped the runaway boulder unleashed by the quake at the Whitney Portal Campground in California’s Inyo National Forest.

Hikers who returned to the camp that day likely found their cars covered in a blanket of dust and saw newly arrived boulders sitting nearby, said Olson, who documented the aftermath that evening as part of his work for the California Geological Survey, which includes determining the source and impact of earthquakes and assessing seismic hazards.

The epicenter of the quake in Owens Valley was 160 miles from that of the Monte Cristo earthquake in May, but the quakes were not related, experts say.

Western North America has seen a series of earthquakes in 2020, covering a wide swath of territory reaching from Mexico to Idaho. But the occurrences are unrelated, and there is no evidence that the frequency of earthquakes is increasing, at least on a time scale relevant to humans.

Rich Koehler, an earthquake geologist with the Nevada Bureau of Mines and Geology at the University of Nevada, Reno, who studies paleoseismology, or the study of prehistoric earthquakes, said the mere fact that earthquakes occur near one another doesn’t mean they are related.

“Earthquakes are distributed throughout Nevada, and they happen all the time,” Koehler said, “so one particular earthquake hundreds of miles away from a bigger earthquake is not necessarily related.”

An exception is aftershocks. Earthquakes can continue for months or years at or near the epicenter of an earthquake, but they typically decrease in magnitude and frequency over time. Boise, Idaho, is still experiencing aftershocks from a 6.5 magnitude earthquake on March 31, including a 4.5 magnitude quake on June 24. 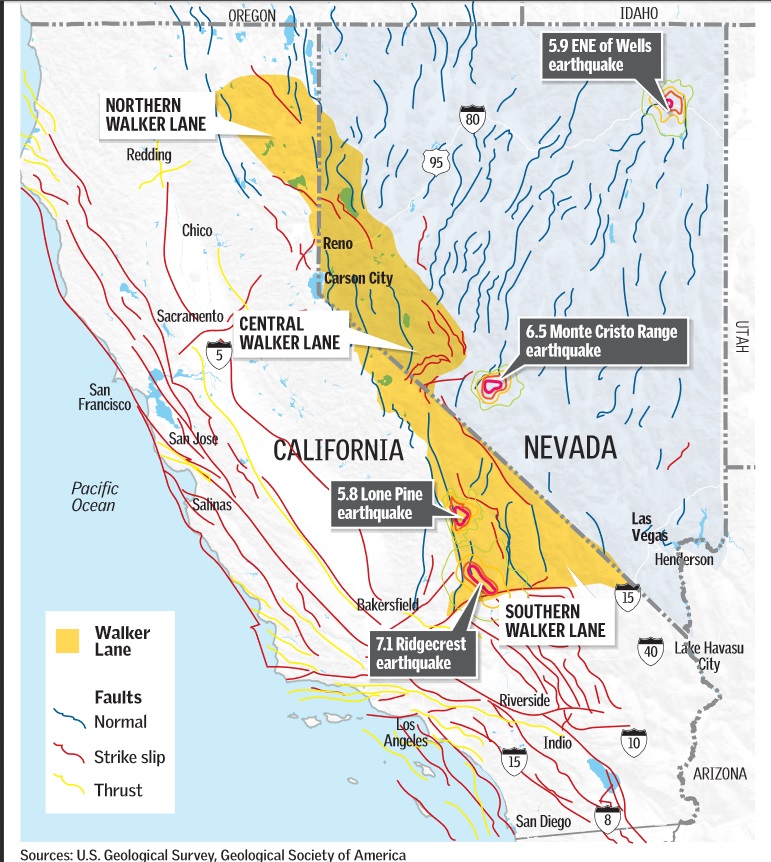 Walker Lane briefly gained some notoriety in 2019 as the subject of a theory proposing that instead of the continent splitting along the San Andreas Fault in millions of years, the rupture will actually occur along Walker Lane. In this scenario, most of California would be cast into the Pacific Ocean, leaving Reno as oceanfront property.

Geologists have a good idea of where earthquakes can happen because they know the geography of fault lines in the West, including Walker Lane, Koehler said.

Faults in the Walker Lane have recurrence intervals of hundreds to thousands of years, Koehler said. When averaging across all of the faults in Walker Lane, we can expect a major earthquake, above magnitude 6.0, in the zone about once every 20 or 30 years. Fault lines don’t care about human schedules or predictions, though; one could go 100 years without a major earthquake or unleash several over a period of months.

Studying earthquakes is more than just an academic pursuit into the history and geology of the Earth. What we do know about earthquakes is crucial to engineering and infrastructure projects. The location of faults and the potential severity of earthquakes can impact plans for projects like pipelines, schools, hospitals, bridges and more.

The 2019 Ridgecrest earthquake, which was actually two earthquakes on July 4 and 5, is a case study in the dangers of not taking seismic hazards into account. The 6.4 magnitude foreshock on July 4 occurred on a fault that wasn’t well-understood, according to Olson. The earthquake surprised locals and geologists, who didn’t anticipate such a large earthquake in the area, he said. The second quake on July 5 was a magnitude 7.1.

The first rupture intersected with a highway and two pipelines that fed water to the small California city of Trona. The earthquake ruptured the highway and broke both pipelines, leaving the city without water.

Knowing the seismic hazard could have guided the implementation of safer features in the pipeline, Olson said, such as using flexible connections, elevating the pipelines or using more durable construction materials.

Research into the Ridgecrest earthquake is still ongoing, and early findings suggest the surprisingly high magnitudes are the result of ruptures of multiple smaller faults in quick succession, not just the movement of a single larger fault.

Geologists now know that the Ridgecrest faults can trigger a large earthquake and can take that into account when rebuilding and starting new infrastructure projects, Olson said.

The work of understanding earthquakes and mapping new faults is a multidisciplinary effort, he said. From paleogeologists to engineering geologists, from cities to the federal government, scientists work together to form a comprehensive picture of a fault system like Walker Lane.

By adding more faults to the picture, he said, “We really start to be able to understand hazard better, and we can begin to understand how to protect the public better.”