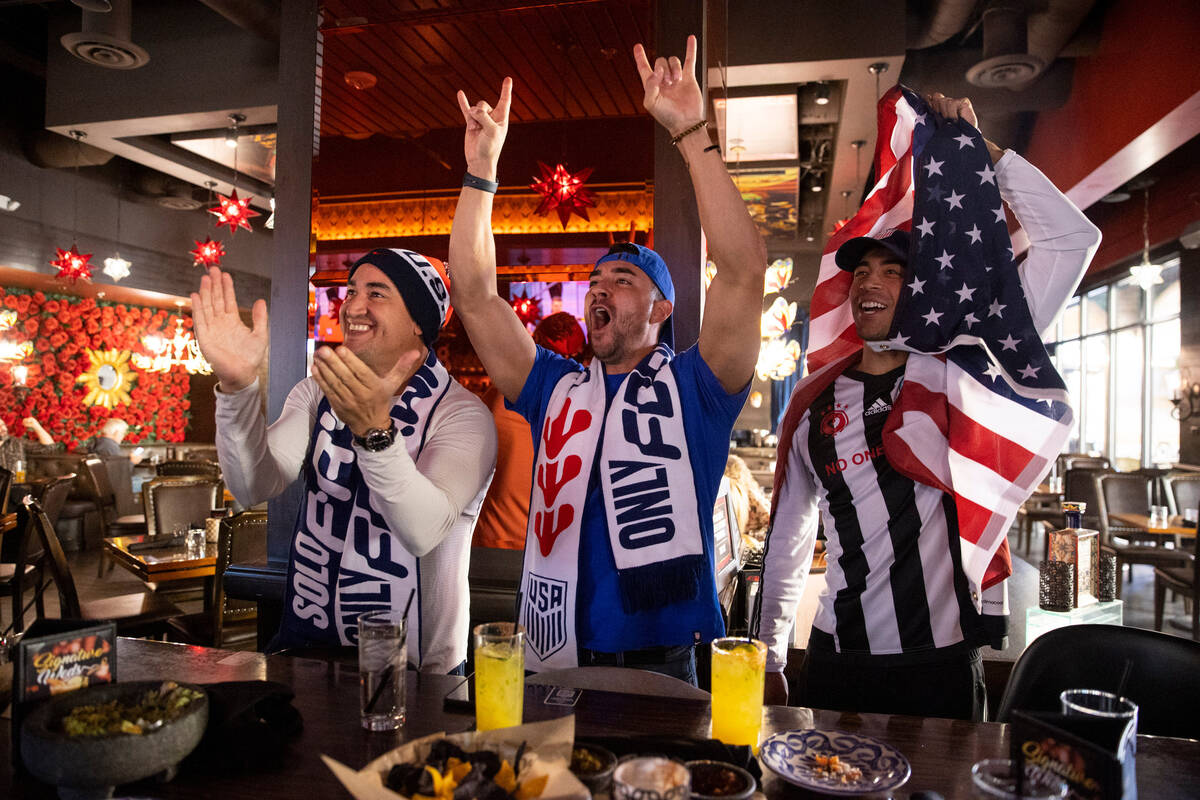 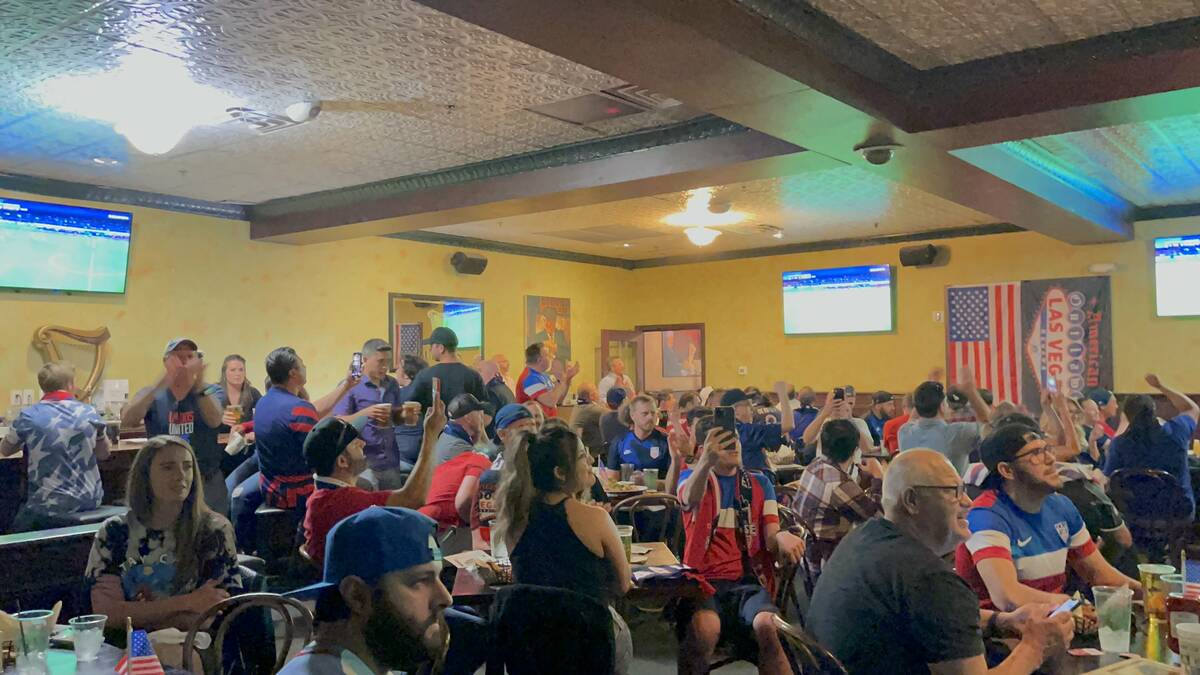 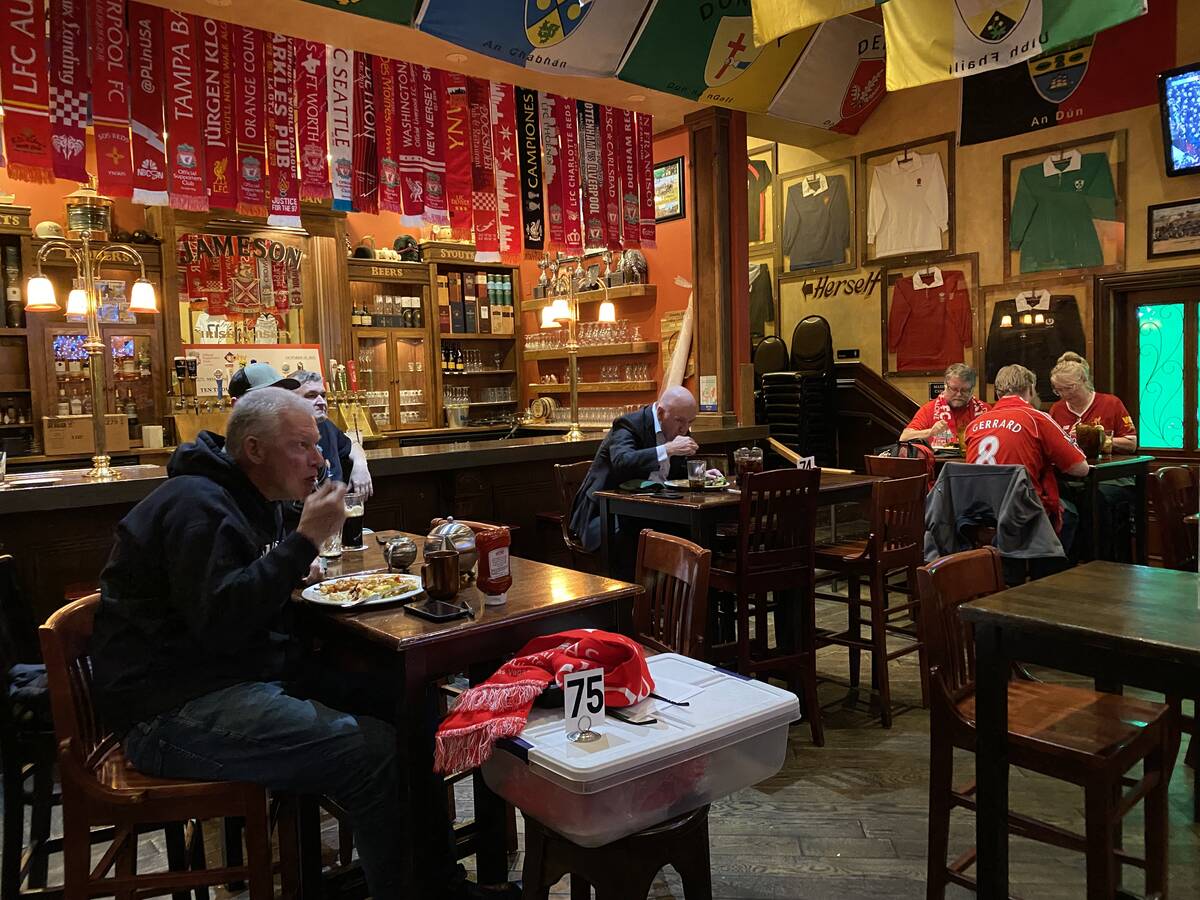 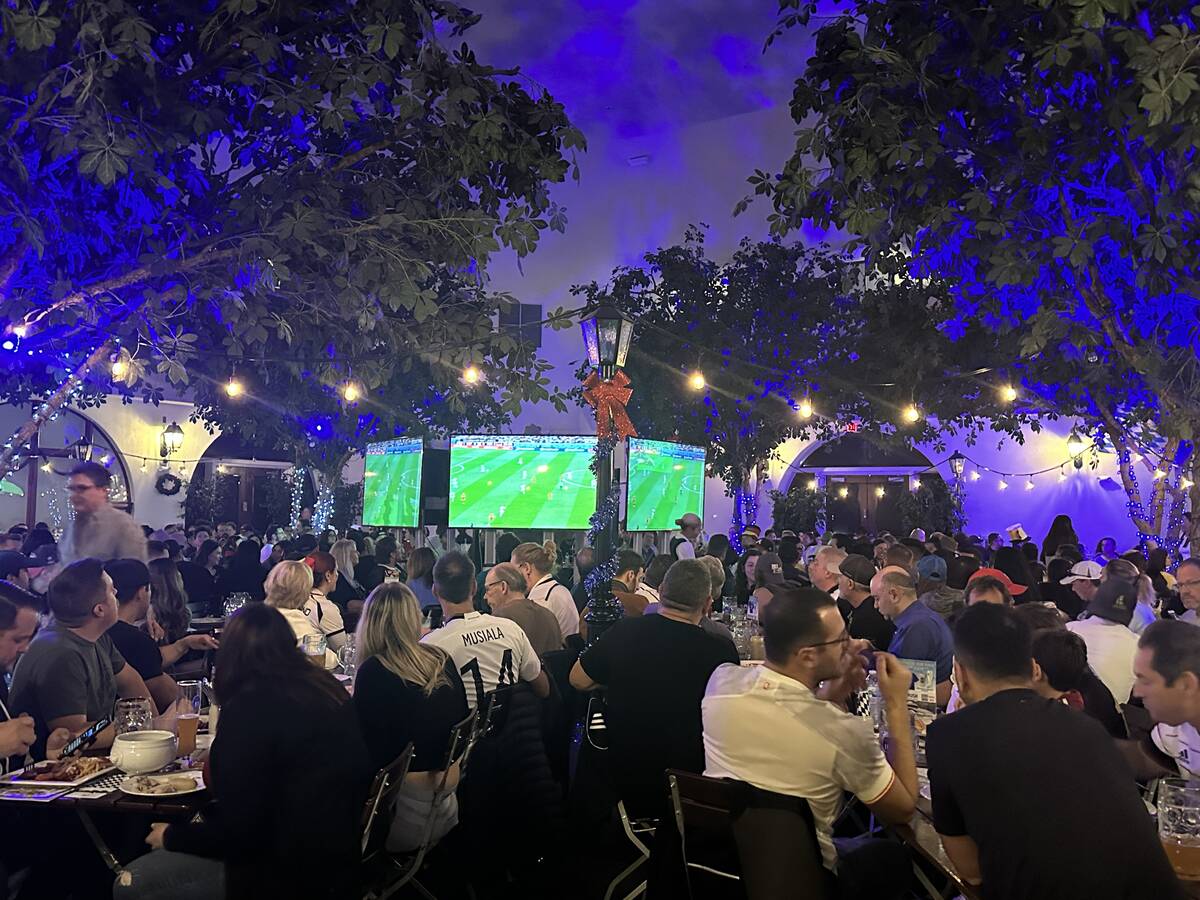 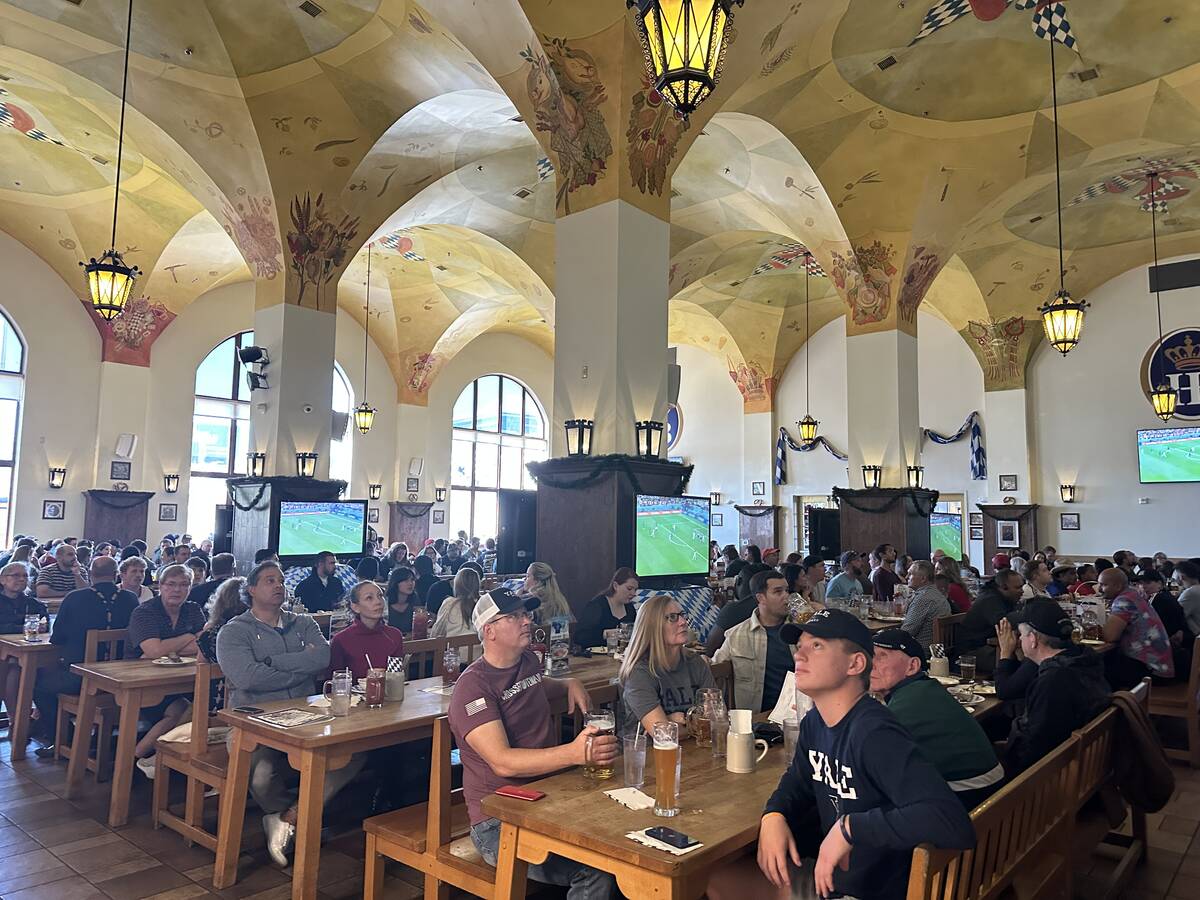 With the 2022 men’s World Cup well underway, local soccer fans have gathered at Hennessey’s Tavern downtown and at other restaurants and bars around the city to watch the games and cheer for their home countries.

Brian Aleman is a big fan of the the United States’ men’s soccer team. More than five years ago, Aleman was deployed to Iraq when the men’s team failed to qualify for the World Cup for the first time since 1986.

“I’ll never forget that feeling of deflation,” Aleman said. “It was probably one of the most disappointing things.”

This time around, Aleman and hundreds of other U.S. fans have packed into Hennessey’s to witness the team qualify for the single-elimination knockout stage of the tournament.

“It’s like we’re creating our own supporters’ section similar to what the stadium’s like,” Aleman said. “I’ll stand up and lead chants, I’ll have other people help me lead chants. It’ll come from anywhere.”

The 32-team quadrennial tournament started Nov. 20, with four games a day played most days for about the last two weeks. Throughout that time, fan groups for the United States, Mexico and a strong German contingent have taken over local establishments to watch their teams’ first three games.

Starting Saturday, the single-elimination stage of the tournament starts with 16 teams that qualified out of the opening group. Two games will be played at 7 a.m. and 11 a.m. local time almost every day from now until Dec. 18.

Aleman is the president of the Las Vegas chapter of the American Outlaws, a U.S. soccer fan group with chapters across the country. The chapter calls Hennessey’s home for watch parties.

Aleman sets up shop to the right of the bar in a corner by a fireplace in what he called the operations center of the watch party. His voice is usually hoarse by the end of a night — or day — of cheering and chanting.

“We suffer like we’re there with the fans there and it’s what I love about it,” Aleman said.

General manager Kris Olender, a longtime soccer fan, said he reached out to Aleman to offer Hennessey’s as a host for the group when it was in need of a home base.

During the World Cup, the bar has been opening at 7:30 a.m. and serves breakfast to show two games a day.

Olender said Hennessey’s had about 200 people last summer when the United States played Mexico in the Gold Cup final at Allegiant Stadium. Another crowd is likely Saturday when doors open at 6:30 a.m. for the U.S. game against the Netherlands starting at 7 a.m.

Here are some other spots that will be hosting World Cup watch parties between now and the final on Dec. 18.

The Mexican soccer fan group “Pancho Villa’s Army” has a large following in Las Vegas and group members gathered at Circa to watch Mexico’s games. At least 150 Mexico fans were expected for each game, according to group leader Richard Guel.

Those at Circa during Mexico’s games experienced drums and chanting fans throughout the 90 or more minutes of play.

“We use the same passion that we do in the stands at a watch party,” Guel said. “We’re very observant, very critical, we follow the team, very in tune into what’s going on during the match.”

While Mexico was eliminated from the tournament on Wednesday, Circa will be hosting watch parties at the casino’s sportsbook almost every day from now until Dec. 18, according to organizers.

The 24-hour pub located on West Tropicana Avenue, near South Decatur Boulevard, allows fans the chance to come early and stay late for games. It normally shows club games from England, including around noon on a recent Wednesday when only about a dozen people gathered.

He said games involving the U.S. and England will draw the most people. McMullan said how well England does could affect turnout as the tournament progresses.

The Melameds love El Dorado Cantina’s Sunset Road location and will be going there to share a meal and watch some games.

El Dorado is partnering with the Las Vegas Lights, the city’s professional soccer team, to put on watch parties. There will be giveaways that include a TV, tickets and merchandise.

Street tacos will be $5 during all U.S. games.

Hofbrauhaus vice president Klaus Gastager said the German restaurant and beer hall offers a convenient alternative to watching games at a sportsbook or hotel with free parking right behind the building.

“The atmosphere is extremely electrifying and that’s why I think makes it a big difference to be amongst such a big crowd at the Hofbrauhuas, in the beer garden or in the main (hall) because people could watch that game anywhere in the world,” he said. “In their hotel room, or wherever they want but obviously they want to be amongst other fans and it’s definitely more intimate being in the beer garden for example then being in the sportsbook in one of the casinos.”

Hofbrauhaus has eight TVs set up in the beer garden, which seats about 300 people, and will also have its main hall open. The restaurant is opening at 10 a.m. for games.

The beer hall will be open at 6:30 a.m. Saturday for the United States’ round of 16 game against the Netherlands.