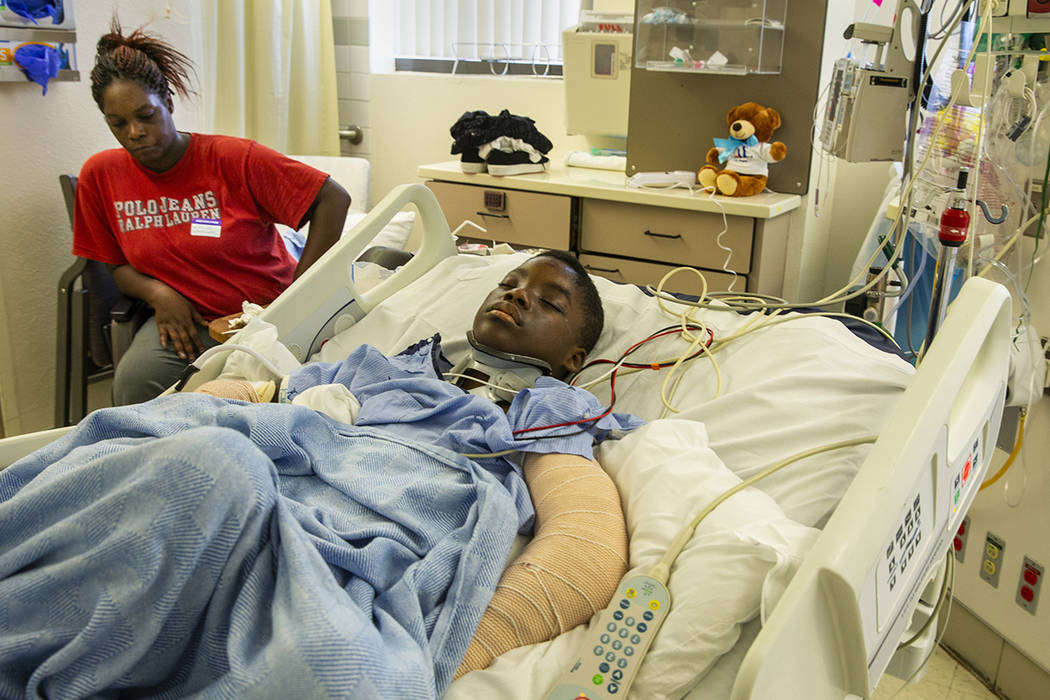 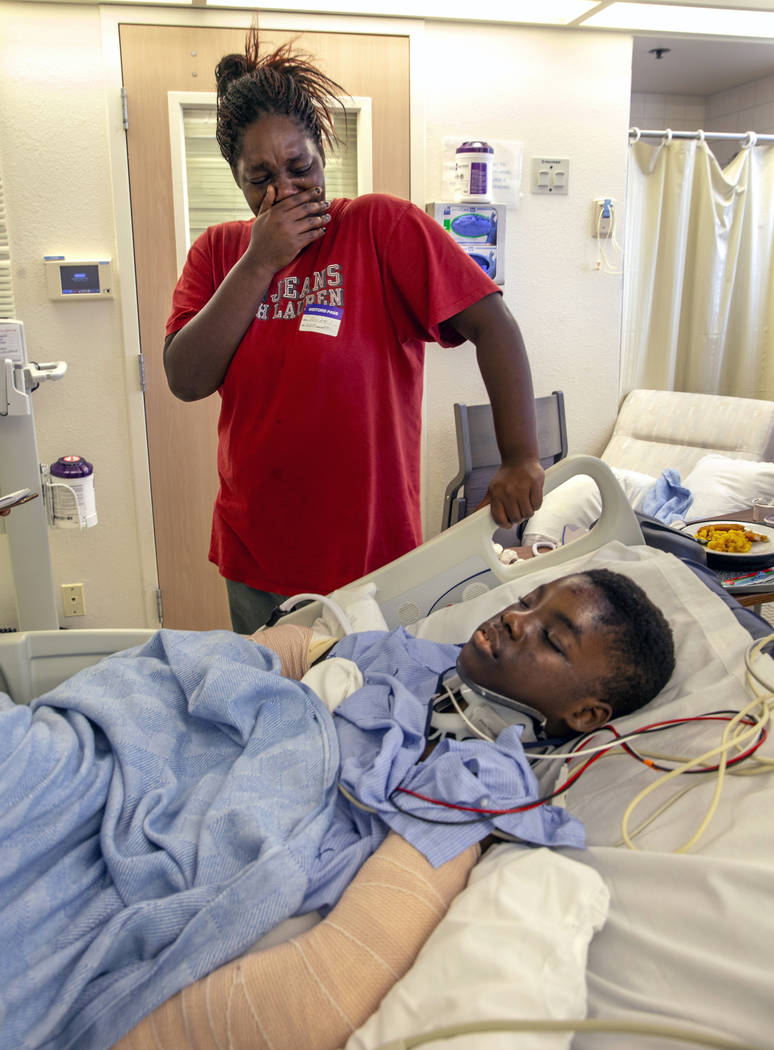 Thylicia McKnight, above, cries over her son Lennie Modica, 9, who is in recovery in the pediatric intensive care unit at University Medical Center following a major vehicle crash on Friday, July 12, 2019, in Las Vegas. (L.E. Baskow/Las Vegas Review-Journal) @Left_Eye_Images 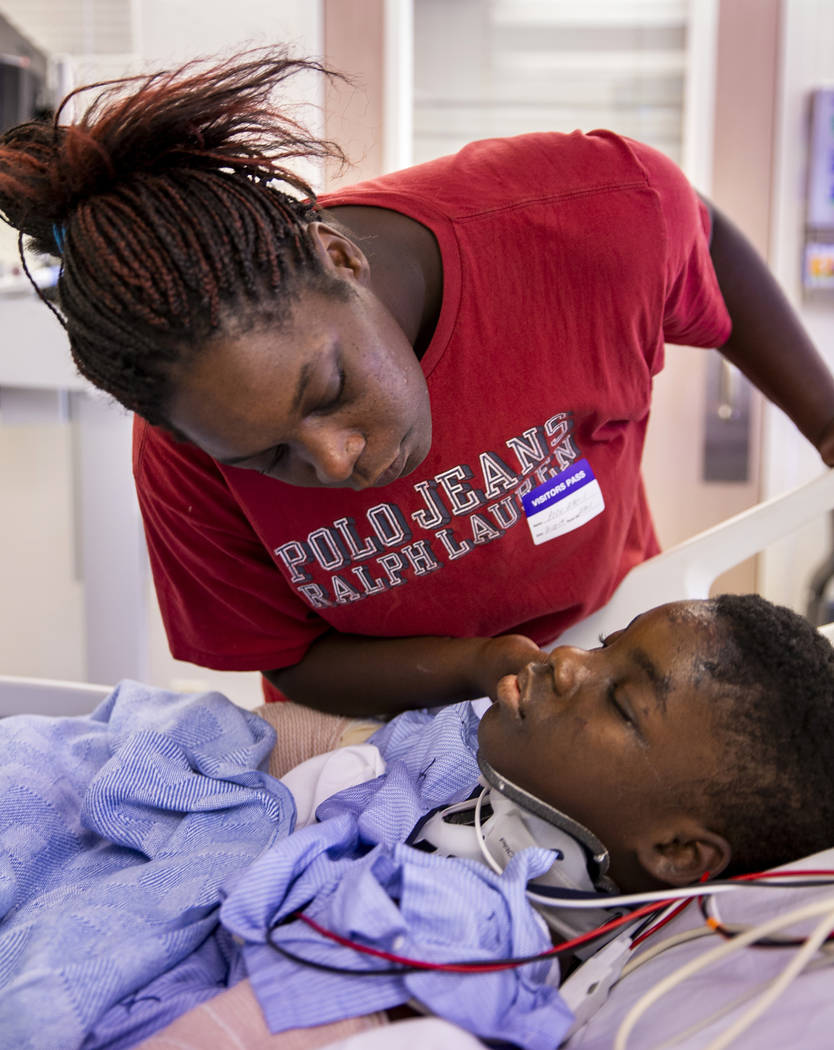 Thylicia McKnight, above, attempts to wake her son Lennie Modica, 9, who is in recovery in the pediatric intensive care unit at University Medical Center following a major vehicle crash on Friday, July 12, 2019, in Las Vegas. (L.E. Baskow/Las Vegas Review-Journal) @Left_Eye_Images 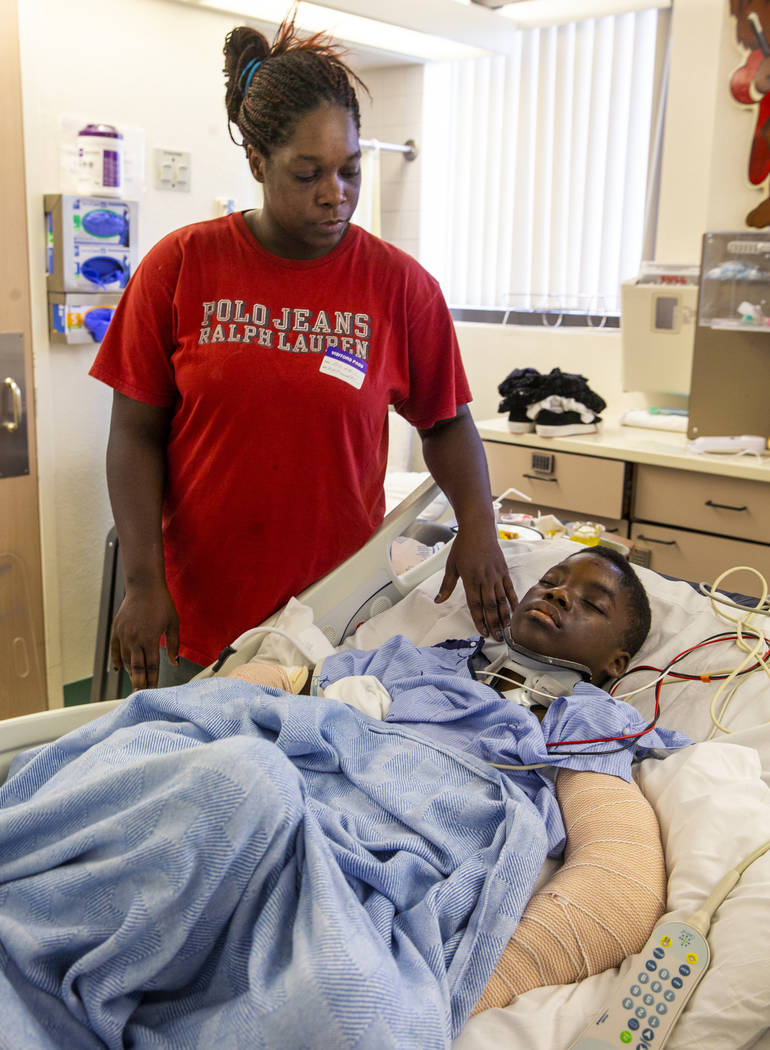 Thylicia McKnight, above, checks on her son Lennie Modica, 9, who is in recovery in the pediatric intensive care unit at University Medical Center following a major vehicle crash on Friday, July 12, 2019, in Las Vegas. (L.E. Baskow/Las Vegas Review-Journal) @Left_Eye_Images 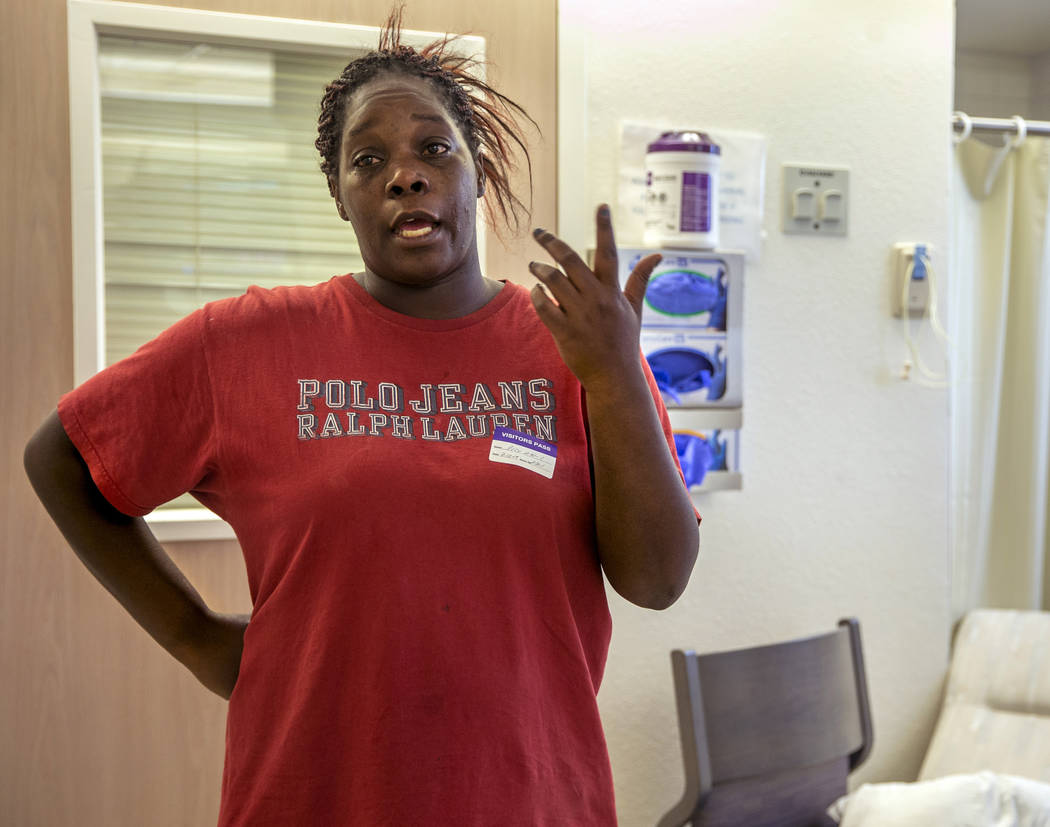 Thylicia McKnight talks about her children as one is still in the pediatric intensive care unit at University Medical Center following a major vehicle crash on Friday, July 12, 2019, in Las Vegas. (L.E. Baskow/Las Vegas Review-Journal) @Left_Eye_Images 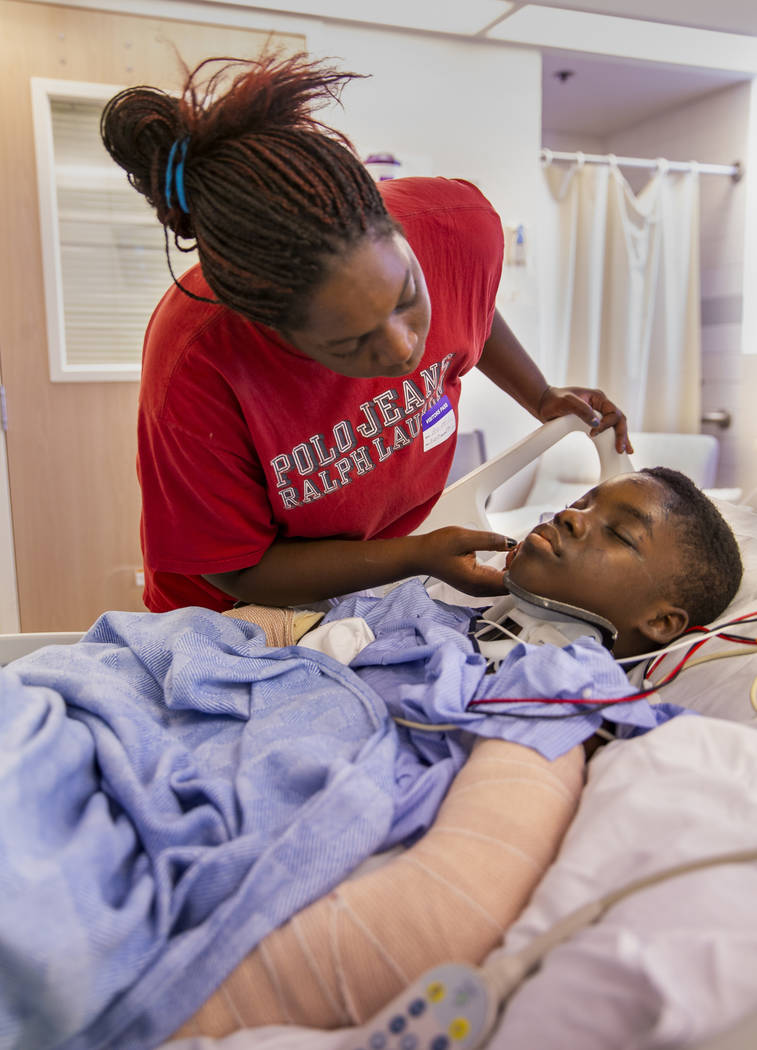 Thylicia McKnight, above, attempts to wake her son Lennie Modica, 9, who is in recovery in the pediatric intensive care unit at University Medical Center following a major vehicle crash on Friday, July 12, 2019, in Las Vegas. (L.E. Baskow/Las Vegas Review-Journal) @Left_Eye_Images

The kids packed into the Toyota Camry, their pockets stuffed with the loose change they had been secretly saving up. It was Grandma’s 56th birthday.

It was just after 10 a.m. Tuesday, and temperatures already were approaching 90 degrees, so they popped into a gas station for some cold drinks. It was to be the first stop on a list of surprises the siblings — ages 2, 4, 9 and 10 — had for Rose Mary Modica.

From there, they would ask “Nana Rose” to drive to the store. She could pick any gift she wanted, they told her.

But all of the sudden, according to 10-year-old Herman, the Toyota picked up speed on Washington Avenue, near Decatur Boulevard, as they entered a marked construction zone.

“Everybody hold on,” Herman recalled his grandmother yelling as she gripped the steering wheel, the car striking an orange cone. Nearby, construction workers were laying fresh concrete.

As the cone flew over the car and out of sight, Herman, terrified, began counting to himself.

Across town, the children’s mother, Thylicia McKnight, was at a job orientation at a Goodwill thrift store.

This new job felt like a promising fresh start. McKnight, 33, has been homeless for months, separated from her children’s father — Modica’s son — and working hard to turn things around and regain custody of the kids.

Modica had been caring for the siblings while McKnight was trying to get back on her feet. Their father has been incarcerated, awaiting sentencing in a battery case, court and jail records show.

But her job orientation was cut short. Her social workers called.

“The kids were in a crash. We’re going to come pick you up,” McKnight recalled them saying during an interview Friday evening at University Medical Center’s pediatric trauma unit, where her kids had been hospitalized with serious injuries.

The last thing Herman remembers before the crash was counting to three, and then suddenly he was lying on a sidewalk, strangers crowded around him. Everything on his body hurt. He was pretty banged up but somehow had not broken any bones.

But what Herman doesn’t remember is that after hitting that first cone, Las Vegas police have said, the sedan sped over an open trench in the construction site, colliding into a work truck. Spinning out from the trench, the car then slammed into a nearby dirt berm and momentarily became airborne before hitting a skid-steer loader.

It was a chain reaction, impact after impact.

“I am so grateful to have my children alive, because that car …” McKnight said, trailing off.

Witnesses have told the Las Vegas Review-Journal that Modica was yelling and honking, as if she “couldn’t stop or something.”

When the dust from the crash had settled, the sedan barely resembled the shape of a car anymore. Bystanders pulled the children from the wreckage.

Modica, who police said had not been wearing a seat belt, was lying in the street. She died that morning at the medical center of multiple blunt force injuries. The Clark County coroner’s office has said no other significant conditions were listed as a cause of death, including alcohol intoxication.

The day after the crash, a Las Vegas police spokesman said fatal detail investigators would use any retrievable car data to determine whether a malfunction was a contributing factor. As of Friday, a cause had not been released.

Two recalls for 2007 to 2010 model Camrys were announced in 2009 and 2010, respectively, for floor mats and accelerator pedals. Both were announced after reports of unintended acceleration.

McKnight and Modica, who had known each other for 16 years, had a strained relationship. Still, she felt sad over the death, because her children lost their Nana Rose, whom they adored and “loved so much,” according to McKnight.

“I give her a lot respect,” she said. “She was caring for her grandchildren.”

On Friday evening, Lennie was fast asleep in his hospital bed. Both his arms — in casts from the shoulders down — were propped up on pillows. He looked comfortable despite the stiff neck brace holding his head in place. His long eyelashes fluttered as if he was dreaming.

His mother’s tears dripped down onto his hospital gown as she hovered over him, her hand placed over his chest, feeling the rise and fall of his breath. She was trying to wake him up to eat.

“He’s such a strong guy,” she said, struggling to get the words out through her tears. “He has such a big heart.”

Lennie woke up for the first time Thursday, McKnight said. When he did, he asked his mom, “Is everybody OK? How’s everybody doing?”

Of the siblings, he was the most seriously injured in the crash. In addition to the broken arms, the bones in one of his hands were crushed and the back of his head had been split open, requiring staples. Doctors were still working Friday to flush out all the glass and debris in his left eye, and a surgery was scheduled for Monday to repair three of his fingers.

He will be the last of the four siblings to be discharged from the hospital.

His brothers, Herman and 4-year-old Noel, who suffered a concussion, got to go home Thursday. Meanwhile, their 2-year-old sister Christine, who was in a room down the hall from Lennie, would go home sometime Friday night or early Saturday.

For now, “home” means their great aunt’s house. She has agreed to take in the kids while McKnight finds a place to live.

Lennie was too tired to eat his dinner — cheese pizza and tater tots. So McKnight placed her cheek against his and whispered, “I love you, honey.” And then she tiptoed out of the room, snaking her way down the hall to Christine, taking a few wrong turns on the way there.

She had been running around the hospital since Tuesday, she said, but still found herself getting lost in the maze of hallways. Her kids were placed in separate rooms spread out among three floors.

In the other hospital room, Christine lay on a bed tucked under a heavy blanket. Her great aunt sat in a chair beside her, watching an informational video about shaken baby syndrome.

Christine’s left lung had collapsed after the crash, and she broke her right arm.

Her mother and aunt looked down at her, the toddler, who can’t yet speak full sentences, mumbled, “Where my brothers?”

The women, who both wore looks of exhaustion and stress, let out a laugh. Christine smiled back. 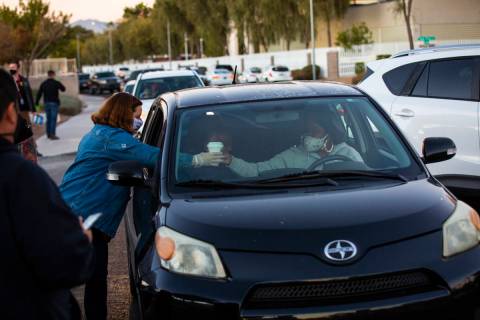