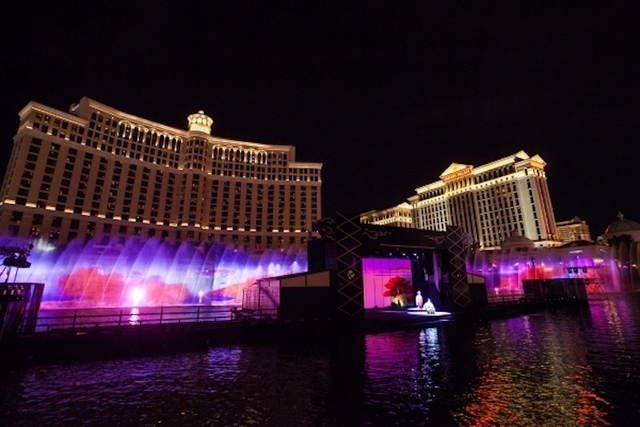 An adapted version of the kabuki classic "Koi Tsukami (Fight With a Carp)" is performed on a stage at the Bellagio fountains in Las Vegas on Friday, Aug. 14, 2015. (Chase Stevens/Las Vegas Review-Journal)

Joyce Rhone can’t look in the mirror without being reminded of the vicious attack.

Whenever people glance at her, the 48-year-old wonders if they are staring at the scars on her face.

The former Bellagio blackjack dealer’s face was slashed by a co-worker in December 2012.

In February 2013, Rhone filed a lawsuit against the casino and her attacker, who is serving a life sentence in prison.

On Friday afternoon, one of her attorneys, Tom Pitaro, told a Clark County jury that Rhone, who has not worked since the attack, deserved at least $1.7 million in lost wages. Rhone earned roughly $80,000 a year, according to the lawyer.

Pitaro argued that the casino did not take “reasonable precautions” to provide Rhone a safe work environment.

A guest at the casino stopped the attacker, Brenda Stokes, as Rhone crawled and staggered away through the casino, and a cocktail waitress came to the victim’s aid.

“They failed in that promise to Joyce,” Pitaro said. “The Bellagio let this happen by their failures. … This didn’t happen because of something at work. This happened because Brenda was jealous outside of work.”

Gina Mushmeche, a lawyer for the Bellagio, said the casino was not responsible for Stokes’ actions.

The assault lasted only four seconds, and security was on the scene within a minute, Mushmeche told jurors.

No one had a reason to be concerned about Stokes’ presence at the casino on her day off, Mushmeche said, and her behavior before the attack was “not suspicious at all.”

Rhone suffered deep cuts to her forehead and right side of her face.

“Bellagio acted reasonable in its response to this terrible event,” Mushmeche said, adding that the company offered Rhone work in another capacity at the casino or at another MGM property.