An opioid overdose in early July killed Malik Noshi, a former football player at Arbor View High School who went on to play for Northern Arizona University, according to state authorities.

The Coconino County Medical Examiner’s Office has determined that Noshi, 22, died July 7 in his Flagstaff home of “acute fentanyl intoxication with ethanol use and recent cocaine use.” His death was ruled an accident, according to spokeswoman Trish Lees.

Flagstaff police have said that a 911 call about noon that day came in requesting medical attention for Noshi, who was not breathing. Medics responded to Noshi’s home and performed “life-saving measures,” but Noshi was pronounced dead at 12:10 p.m.

At the time of his death, Noshi was a senior and starting offensive lineman, wearing jersey No. 65, for the Northern Arizona University Lumberjacks. He was recognized last year as a Big Sky Honorable Mention, according to his bio page on the university’s website.

A Las Vegas native, Noshi sported No. 55 and earned all-state, all-city and all-conference honors while playing on the offensive line for the Arbor View Aggies. He was a member of the first Arbor View football team to go undefeated. 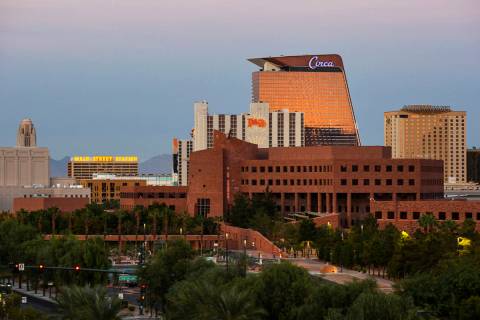 The National Weather Service is reporting that strong northwest winds are occurring over much of the valley, with gusts between 40-55 mph. McCarran International Airport reached a peak gust of 49 mph.

Homeless advocates worry that as the pandemic continues, more people will find themselves living in tunnels that cover more than 600 miles underneath Las Vegas.

Peter Umoh, a design and construction administrator for Clark County, died in August after a battle with COVID-19.