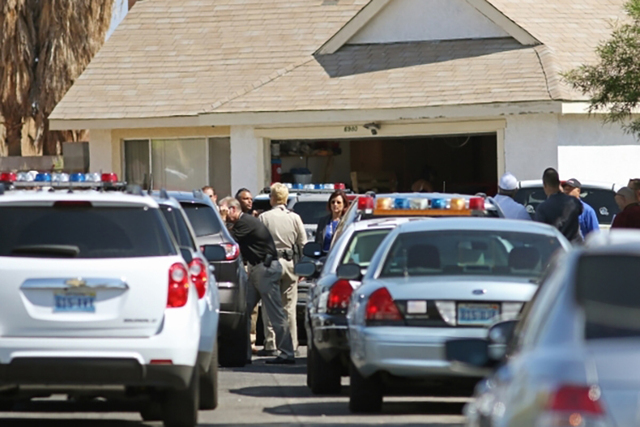 Police respond to an officer-involved shooting in the 6900 block of Berkshire Place on Friday, Aug. 7, 2015, in Las Vegas. Police checking reports of a broken window shot and killed a man who lunged at officers with a sharp object inside a home. (Ronda Churchill/Las Vegas Review-Journal)

The county holds a fact-finding review whenever the district attorney’s office preliminarily deems a police shooting justified. The hearings are meant to provide the public with the evidence that led to the decision and with an ombudsman to question investigators on the public’s behalf.

Correa, a 24-year-old methamphetamine addict with a documented history of mental illness, was shot five times by officers Glen Taylor and Eli Prunchak after the officers said he lunged at them with a screwdriver and a wrench.

Officers were called to the home after a neighbor saw Correa breaking a window to get into his mother’s home. Taylor and Prunchak arrived two hours later and searched the home for Correa, who was hiding in a small closet by the front door.

Footage from a body-worn camera on Taylor showed very little of the incident. The officers, who did a voluntary walkthrough — with their legal counsel — with detectives from the Metropolitan Police Department’s force investigation team, said they thought Correa had a knife and was going to stab them because he was in an attack pose.

“It’s pretty much their word against ours,” the man’s older brother, Gilberto Correa, 41, said of police. “The video doesn’t show anything.”

Detective Ryan Jaeger laid out the incident, and past incidents with Abel Correa that included numerous domestic disturbances involving the man and his mother.

After Correa smashed up her house in June 2015, the woman called police, who advised her to get a restraining order against her son and evict him, Gilberto Correa said.

Attorney Mace Yampolsky served as the public’s ombudsman for the review, and pointed out that the incidents with his mother generally did not involve battery and were cleared by police without an arrest.

One incident ended with Abel Correa’s being involuntarily admitted to the Seven Hills behavioral treatment center, where police said he was diagnosed with “paranoia and psychosis” and prescribed medication.

Jaeger, the only witness, had no specifics on the psychosis or any medications Correa may have been on.

“The way they’re making him seem is much worse than he was,” said Correa’s longtime friend Leonardo Miletovic, 24. “He wouldn’t hurt anyone.”

Many questions by Yampolsky and the family were blocked by hearing master William Jansen, who said they were too “administrative.”

Questions asked included whether the officers gave any other statements (they didn’t) and whether Metro’s administrative review of the incident, concerning policies and procedures, was open to the family or the public (it wasn’t).

The family wanted to know why the screwdriver was in his left hand if he was trying to stab the officers. Abel Correa was right-handed.

The family wanted to know how Correa could have lunged into an attack pose so quickly when the large man, who stands 6 feet tall, barely fit in the foyer’s coat closet.

“They don’t have measurements or anything (of the closet) because it wouldn’t benefit them,” Gilberto Correa said. “They’re always going to justify themselves.”

The family wanted to know why Taylor, who had dealt with Abel Correa before and knew about his mental illness, didn’t know how to de-escalate the situation.

Metro Undersheriff Kevin McMahill told reporters at an August press conference that the officers did not know about the mental health concerns when they went into the house.

But on the body cam footage, Taylor warns Prunchak that Correa is “421A,” the police code for a mentally ill person. He is also recorded talking to the family about the last time he was there and knew which way the man’s room was.

Another question the grieving family said they wanted asked was struck by the hearing master.

“My final question was: ‘Are we (Hispanics) safe to call the police?’” Gilberto Correa said. “We stay quiet, because there’s nobody out there to speak for us.”

He said the family is looking into other ways to get answers, including a legal means.

“The way they proceeded was totally wrong,” Correa said. “Their mistakes cost my brother his life.”

Another public fact-finding review is scheduled for June 30 and will examine Las Vegas police’s shooting of James Brown in August.