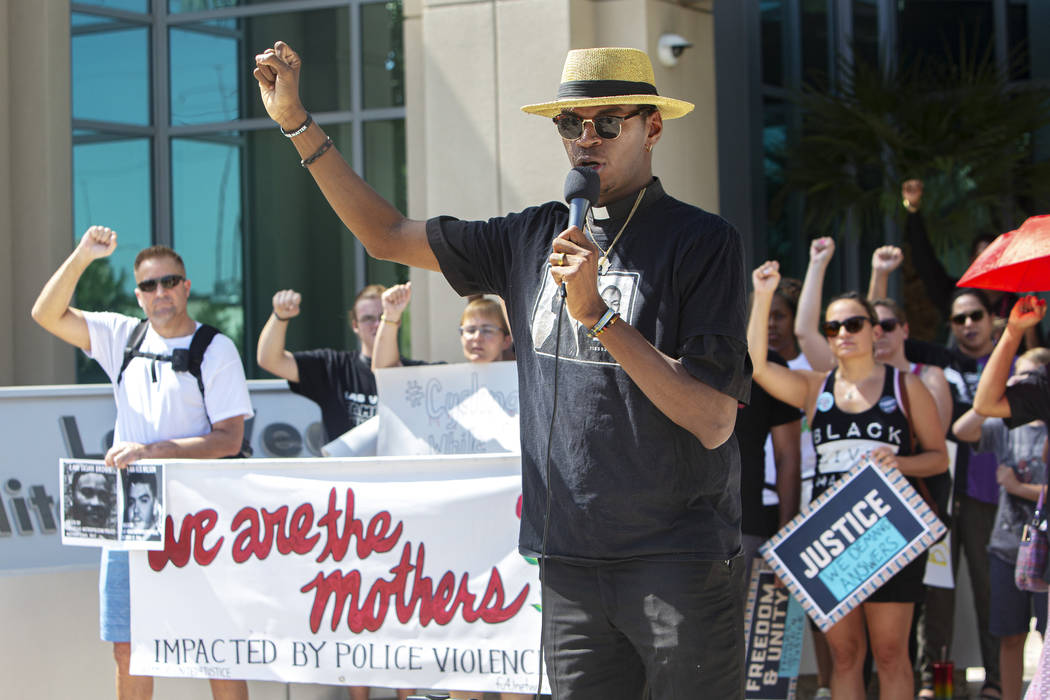 Reverend Stretch Sanders puts a fist up during a rally to protest the death of Byron Williams, the 50-year-old who died earlier this month in Metropolitan Police custody, on Sept. 14, 2019, in Las Vegas. (Michael Blackshire/Las Vegas Review-Journal) 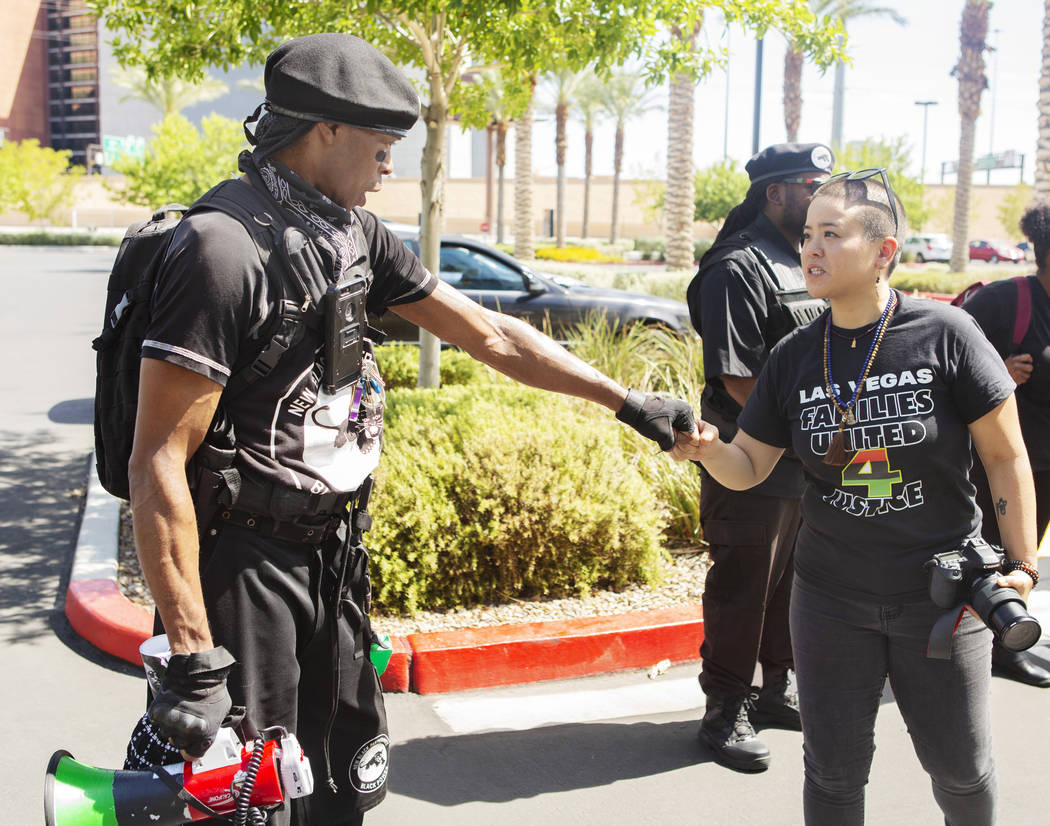 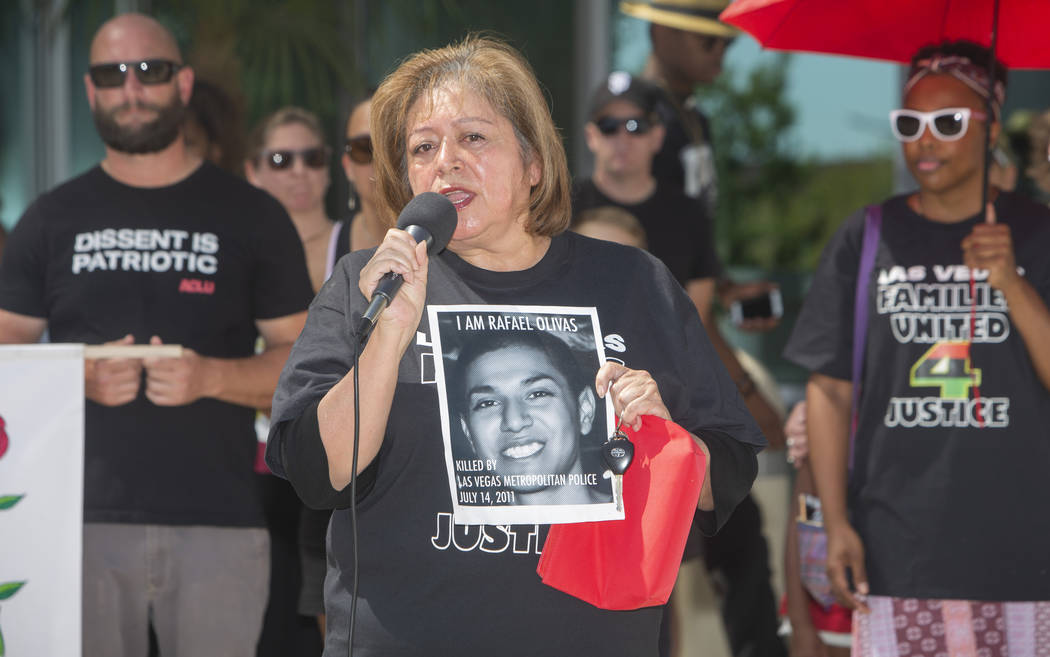 Alma Chavez, whose son, Rafael Olivas, was shot by Las Vegas police officers in 2011, speaks during a rally to protest the death of Byron Williams, the 50-year-old who died earlier this month in Metropolitan Police custody, on Sept. 14, 2019, in Las Vegas. (Michael Blackshire/Las Vegas Review-Journal) 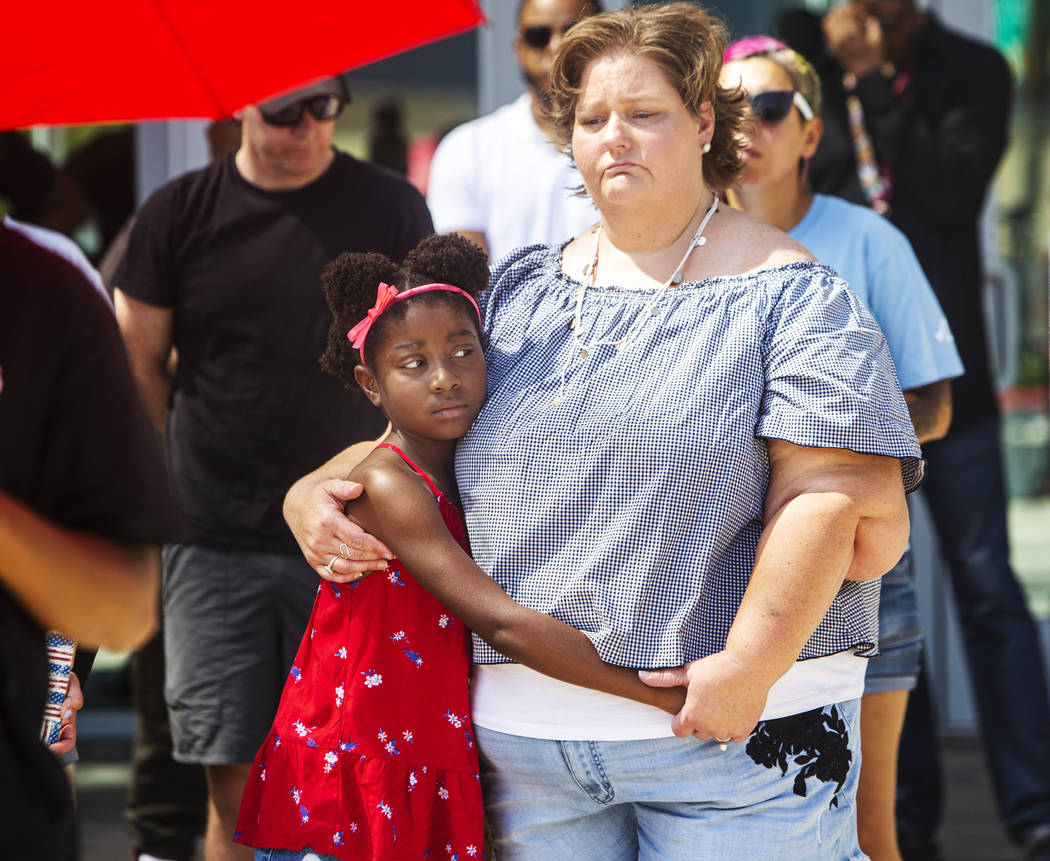 Tabatha Bissen, right, hugs her granddaughter, Chanel Bissen, 9, during a rally to protest the death of Byron Williams, the 50-year-old who died earlier this month in Metropolitan Police custody, on Sept. 14, 2019, in Las Vegas. (Michael Blackshire/Las Vegas Review-Journal) 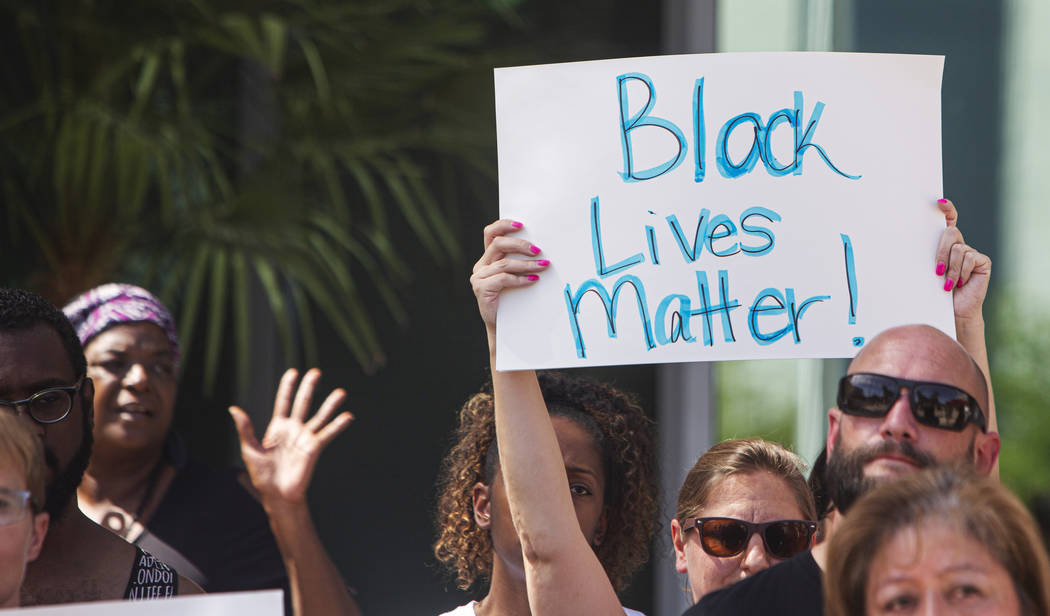 Attendees hold signs during a rally to protest the death of Byron Williams, the 50-year-old who died earlier this month in Metropolitan Police custody, on Sept. 14, 2019, in Las Vegas. (Michael Blackshire/Las Vegas Review-Journal) 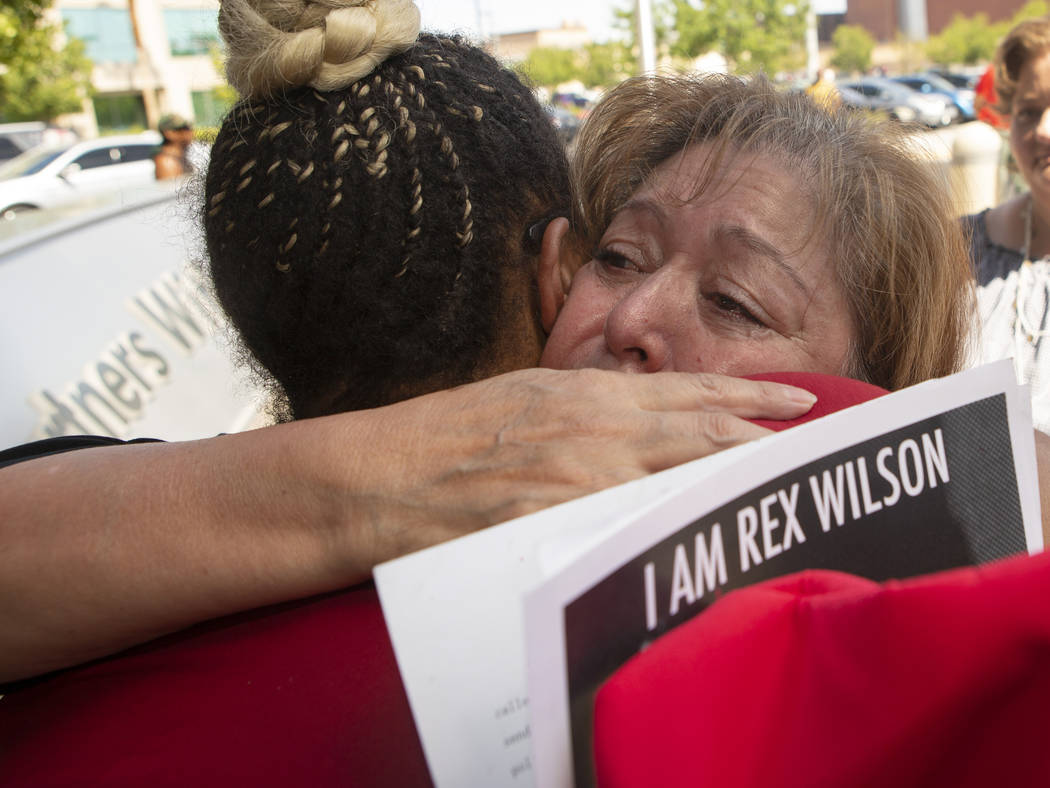 Alma Chavez, left, whose son, Rafael Olivas, was shot by Las Vegas police officers in 2011, hugs Kelly Williams during a rally to protest the death of Byron Williams, the 50-year-old who died earlier this month in Metropolitan Police custody, on Sept. 14, 2019, in Las Vegas. Kelly is the daughter of Byron Williams. (Michael Blackshire/Las Vegas Review-Journal)

Teena Acree wiped tears from her eyes Saturday as she talked about watching body camera footage from the day her uncle died in Las Vegas police custody.

“It’s devastating to see the footage we saw,” she said while standing with about 30 people in front of Metropolitan Police Department headquarters, 400 S. Martin Luther King Blvd., for a news conference and rally.

Acree said she wants people to know this about 50-year-old Byron Williams: “He was a person. He was a human being.”

Williams died in police custody the morning of Sept. 5. He yelled repeatedly “I can’t breathe” after officers handcuffed him, Assistant Sheriff Charles Hank said at a briefing Monday.

He didn’t deserve to die in the way he did, Acree said.

What happened to her uncle, she said, needs to be prevented from happening again.

Williams’ family met with the police after his death and reviewed body camera footage from seven officers who were at the scene. Metro showed clips of the footage at Monday’s briefing.

Family members say they want all of the unedited footage to be released publicly.

Metro last week denied a Review-Journal request for all of the body camera footage, citing the open investigation.

According to Keith Davidson, a Beverly Hills, California, attorney representing the family, Williams told police 21 times that he couldn’t breathe.

“We’re going to get to the bottom of this,” Davidson said. “No stone will be left unturned. Justice will be served.”

Police did not attend Saturday’s event. Metro deferred questions to its public information office, which is closed until Monday.

Another speaker, the Rev. Vance “Stretch” Sanders, told reporters the rally was to talk about how black, brown and impoverished communities are oppressed by police.

“This is a really difficult time for my family,” he said.

The family has lived in the community for about 17 years, Thompkins said.

Thompkins said he’s a single father to a 13-year-old son.

Thompkins said the crowd wasn’t there to talk about specifics of what happened to Williams. He said the family was shown body camera footage.

“For one to be picked as least offensive and be presented to the community, it’s not all right,” he said.

Williams was told by police that no one cared about him and no one would come to help him, Thompkins said.

“As he laid there, those were some of the last words he heard,” he said.

Thompkins said he wants to see changes in state law and within Metro. It’s not OK, he said, for “police to drive the narrative about what happened.”

‘They need to protect us’

Nissa Tzun, co-founder of the Forced Trajectory Project, which documents the effects of police violence on communities, read some of the names of unarmed black men she said were killed by Las Vegas police or who died while in their custody.

Sanders, the reverend, directed attendees to raise a fist in the air to signal “power to the people.”

“We may have to disrupt business as usual,” he said, including getting in the streets, blocking traffic and risking getting arrested, if that’s what it takes to create change.

Regarding the rally’s low turnout, Stretch said, “shame on Las Vegas.” He said he wanted to see thousands.

There were some department changes, but Chavez said there needs to be legislative action.

“I’m tired of seeing family members suffer like me,” she said.

Then, she held up a photo of her son.

“The police already have so much protection,” she said. “They need to protect us.”

After the news conference, Chavez spoke with members of Williams’ family and gave them hugs.

The rally ended with a moment of silence, participants saying Williams’ name three times and a prayer.