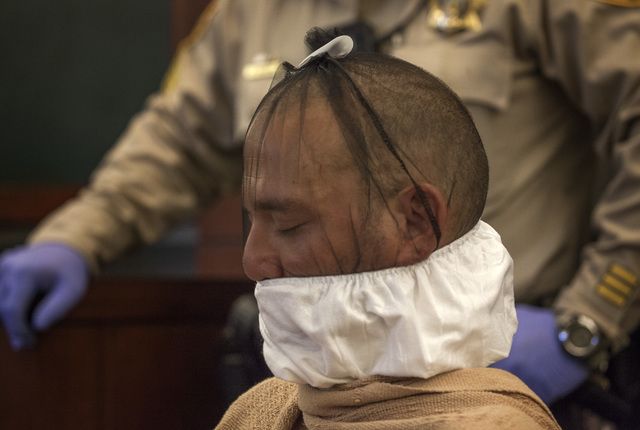 Scott Carmitchel makes his first appearance in Regional Justice Center on Wednesday, July 30, 2014. Carmitchel had a spit mask wrapped around his face. He is facing charges of battery, grand larceny, burglary and robbery with a deadly weapon in the robbing the Bellagio of about $43,500 Friday evening. (Jeff Scheid/Las Vegas Review-Journal) 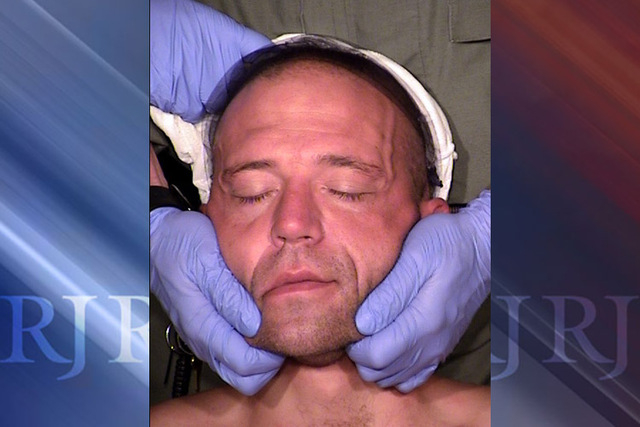 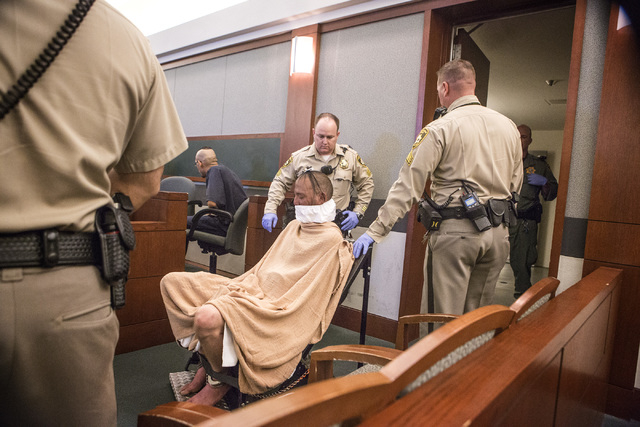 Scott Carmitchel makes his first appearance in Regional Justice Center on Wednesday, July 30, 2014. Carmitchel was is facing charges of battery, grand larceny, burglary and robbery with a deadly weapon in the robbing the Bellagio of about $43,500 Friday evening. (Jeff Scheid/Las Vegas Review-Journal) 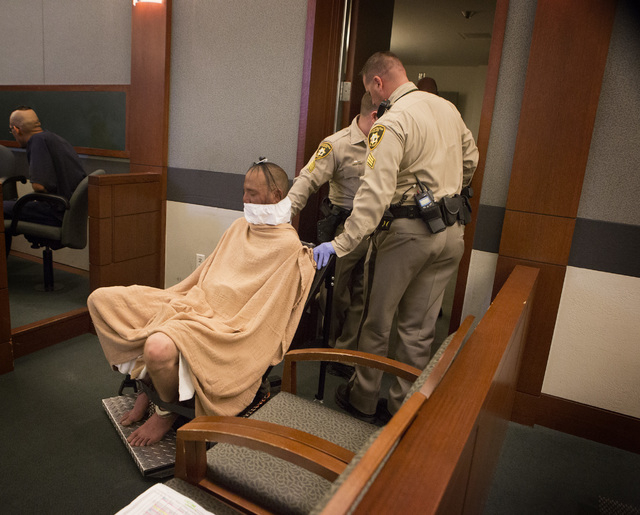 Correction officers wheel Scott Carmitchel out of Regional Justice Center after making his first appearance on Wednesday, July 30, 2014. Carmitchel was is facing charges of battery, grand larceny, burglary and robbery with a deadly weapon in the robbing the Bellagio of about $43,500 Friday evening. (Jeff Scheid/Las Vegas Review-Journal)

Federal authorities are taking over the high-profile prosecution of the Kansas felon charged in the robbery of the Bellagio casino and a Las Vegas bank.

“We believe they can get the most bang for the buck, and therefore it would be in everybody’s best interest to let the U.S. attorney’s office prosecute the case,” Wolfson said.

Federal prosecutors indicated they could get “significantly more prison time” for Carmitchel if he’s convicted in the federal system, Wolfson said.

A conviction would make Carmitchel a career offender in the federal system because he has two other felony convictions, and that could draw a sentence of 22 to 27 years behind bars, Wolfson said the U.S. attorney’s office told him.

Carmitchel, 34, was indicted by a federal grand jury Tuesday on one count of interference with commerce by robbery at the Bellagio and one count of armed bank robbery at a City National Bank branch on East Tropicana Avenue.

Authorities say Carmitchel stole $43,500 in the Bellagio heist on July 25 and $4,355 in the July 22 bank robbery and spent some of the cash on prostitutes and a shopping spree.

On Friday, U.S. Magistrate Judge Peggy Leen ordered a mental health evaluation for Carmitchel, who is in federal custody.

Leen ordered the evaluation after Carmitchel refused to answer questions in court and his lawyer said he refused to communicate with her prior to the hearing. Carmitchel earlier in the week was uncooperative with local authorities as they tried to get him to Las Vegas Justice Court for a series of hearings on charges stemming from his July 26 arrest by Las Vegas police.

Carmitchel, shackled and dressed in jail garb with a spit mask around his neck, was wheeled into court Friday by federal marshals for the hearing. He looked down the entire time and didn’t say a word.

Leen said the mental evaluation was needed to determine whether Carmitchel is competent to stand trial and was competent at the time the alleged crimes were committed.

Carmitchel was to appear in Las Justice Vegas Justice Court on Aug. 13 on local charges of robbery with the use of a deadly weapon, burglary while in possession of a firearm and grand larceny. But instead he is to be arraigned in federal court Aug. 14.

Wolfson said he also likely won’t pursue battery charges against Carmitchel over his scuffling with police during his arrest.