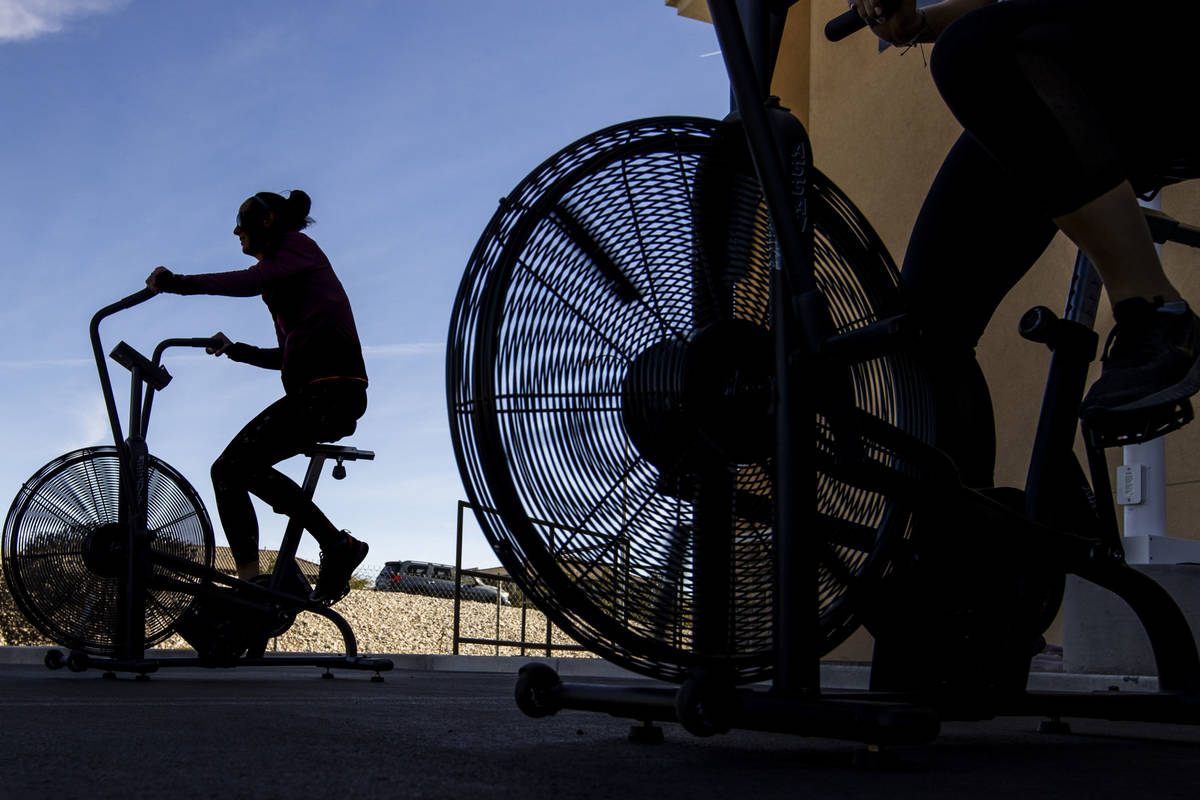 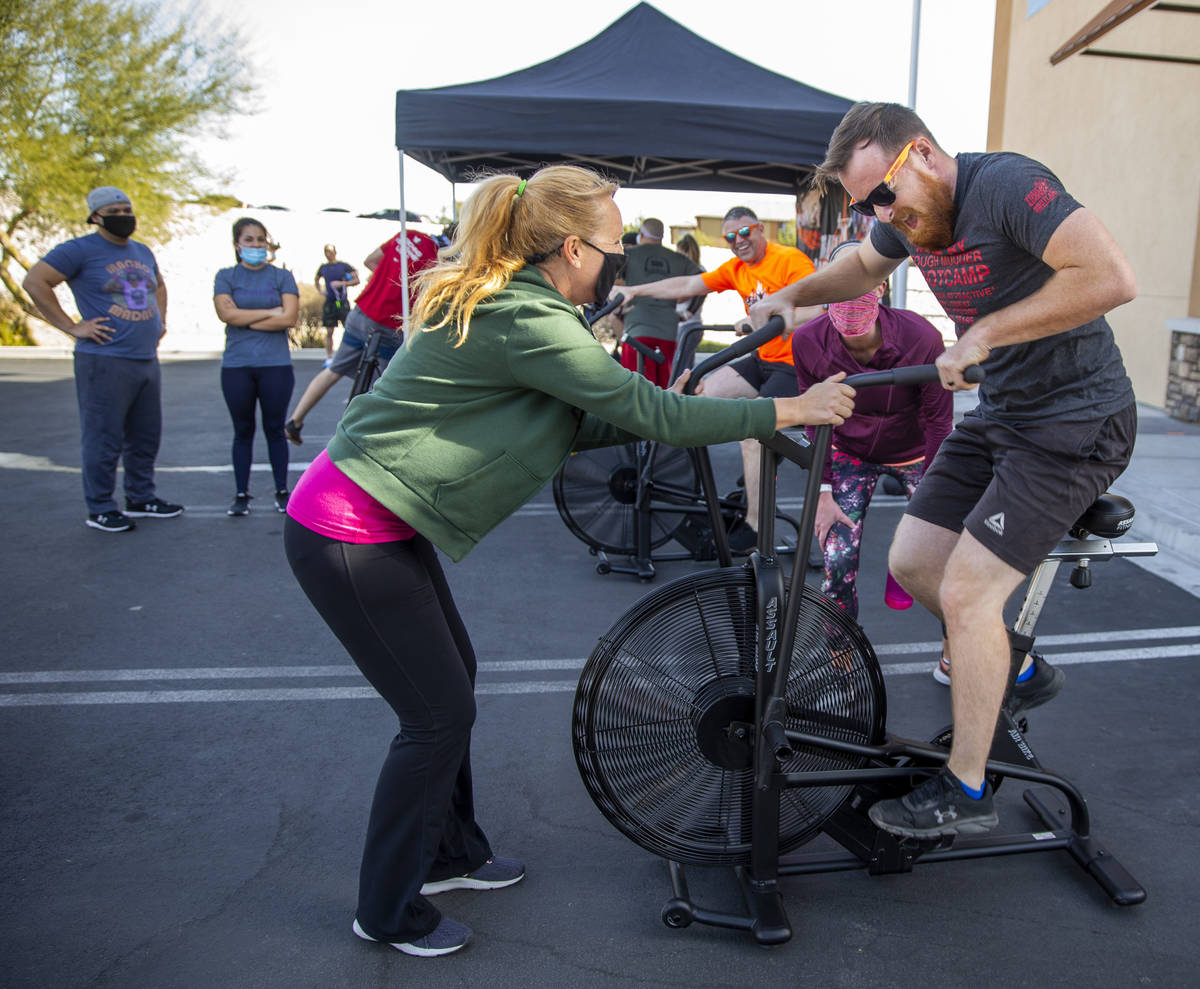 Patrick Lucas, left, grinds out some miles with an assist from Bobbie Martin as Tough Mudder Bootcamp Las Vegas members pedal 96 miles on stationary bikes for a fundraiser to the 5 cyclists killed recently near Searchlight on Saturday, Jan. 16, 2021. (L.E. Baskow/Las Vegas Review-Journal) @Left_Eye_Images 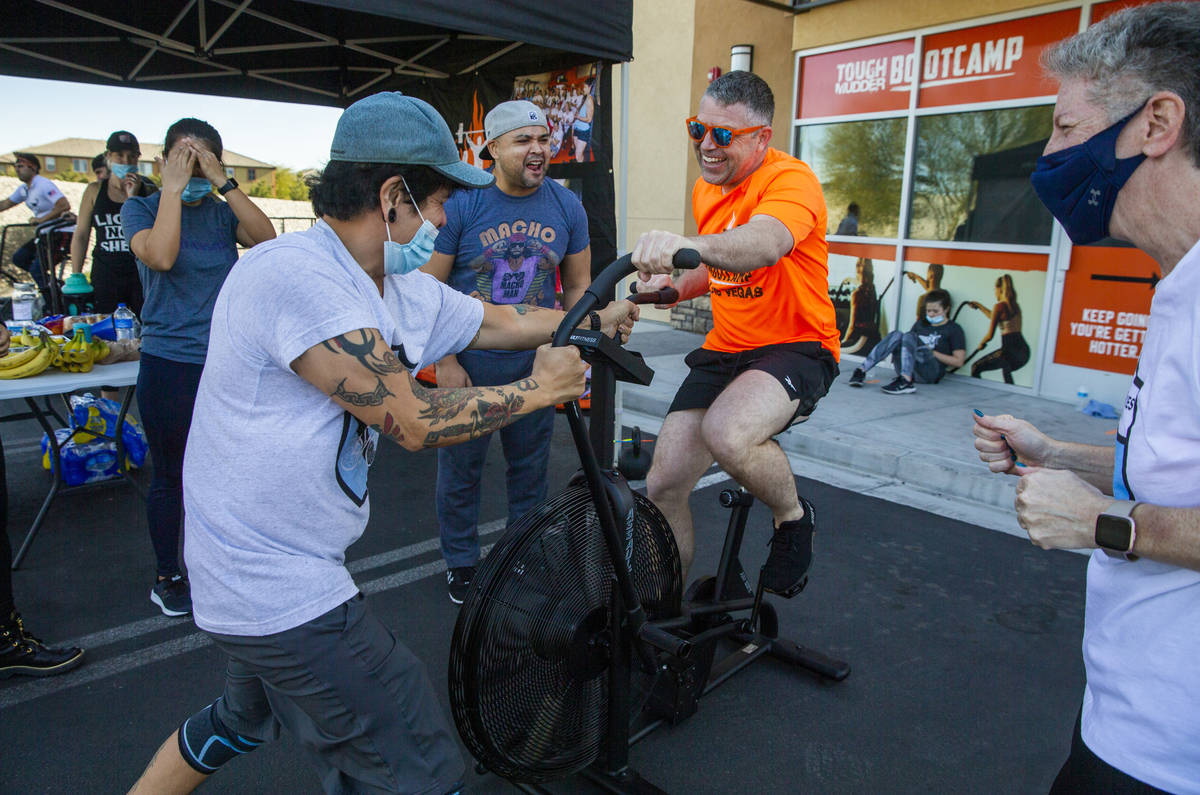 Co-owner Cory Drumright, center, is pumped up by Ron Bondoc,left, and others as he pedals some miles as Tough Mudder Bootcamp Las Vegas members pedal 96 miles on stationary bikes for a fundraiser to the 5 cyclists killed recently near Searchlight on Saturday, Jan. 16, 2021. (L.E. Baskow/Las Vegas Review-Journal) @Left_Eye_Images 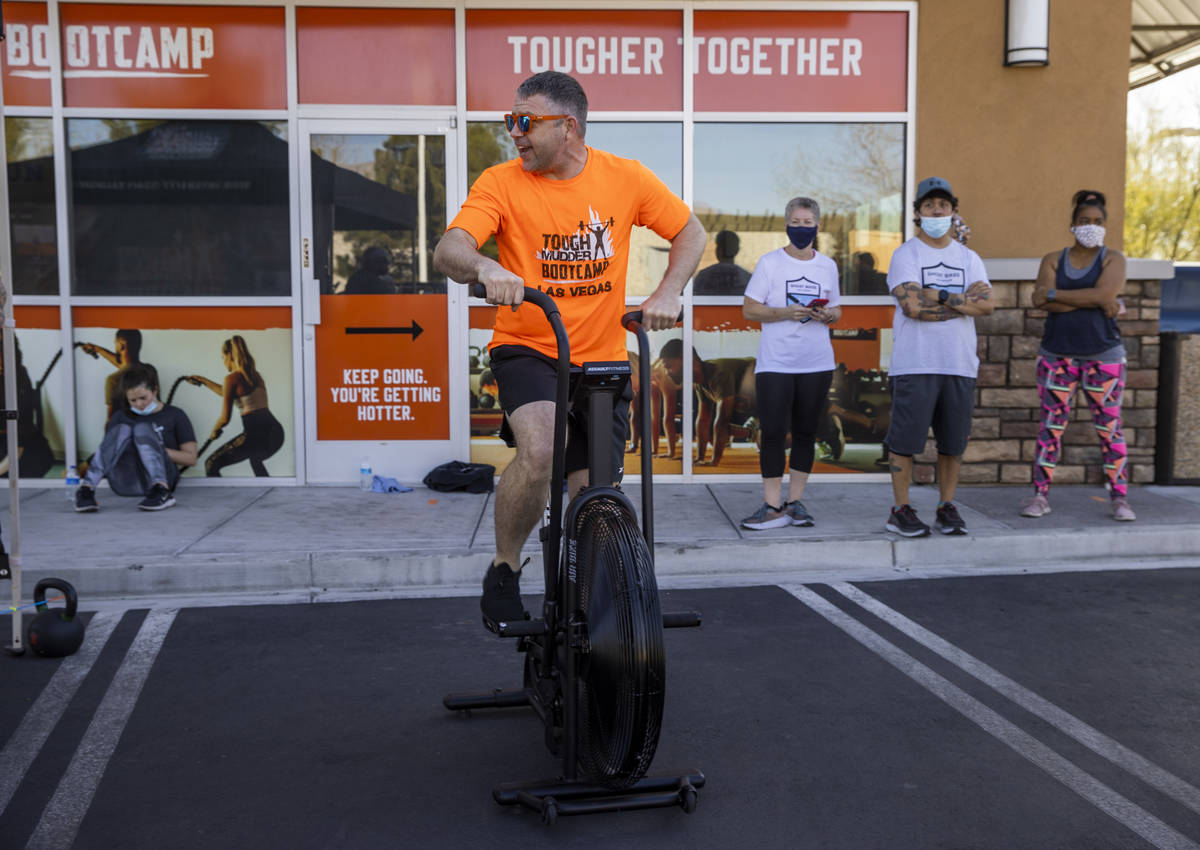 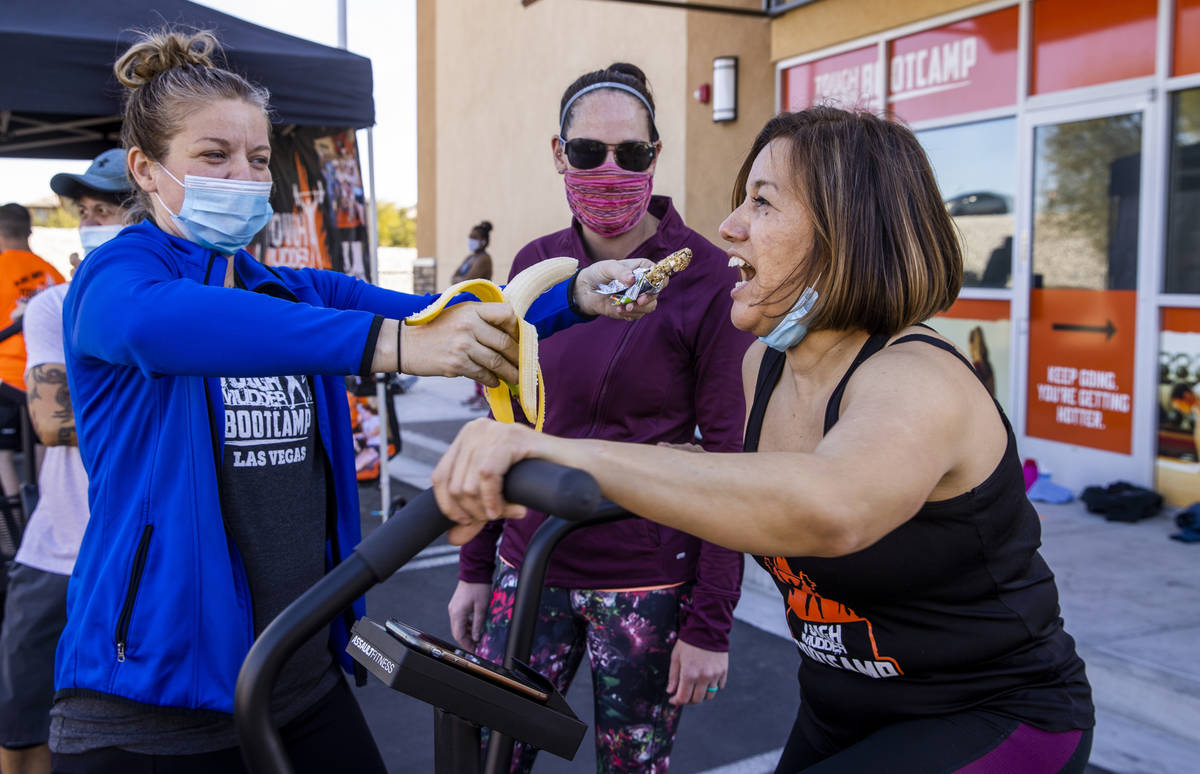 Yanet Martinez, right, is offered a choice of granola bar or banana while pedaling from Sandy Rogers, left, with Megan Kock looking on as Tough Mudder Bootcamp Las Vegas members pedal 96 miles on stationary bikes for a fundraiser to the 5 cyclists killed recently near Searchlight on Saturday, Jan. 16, 2021. (L.E. Baskow/Las Vegas Review-Journal) @Left_Eye_Images 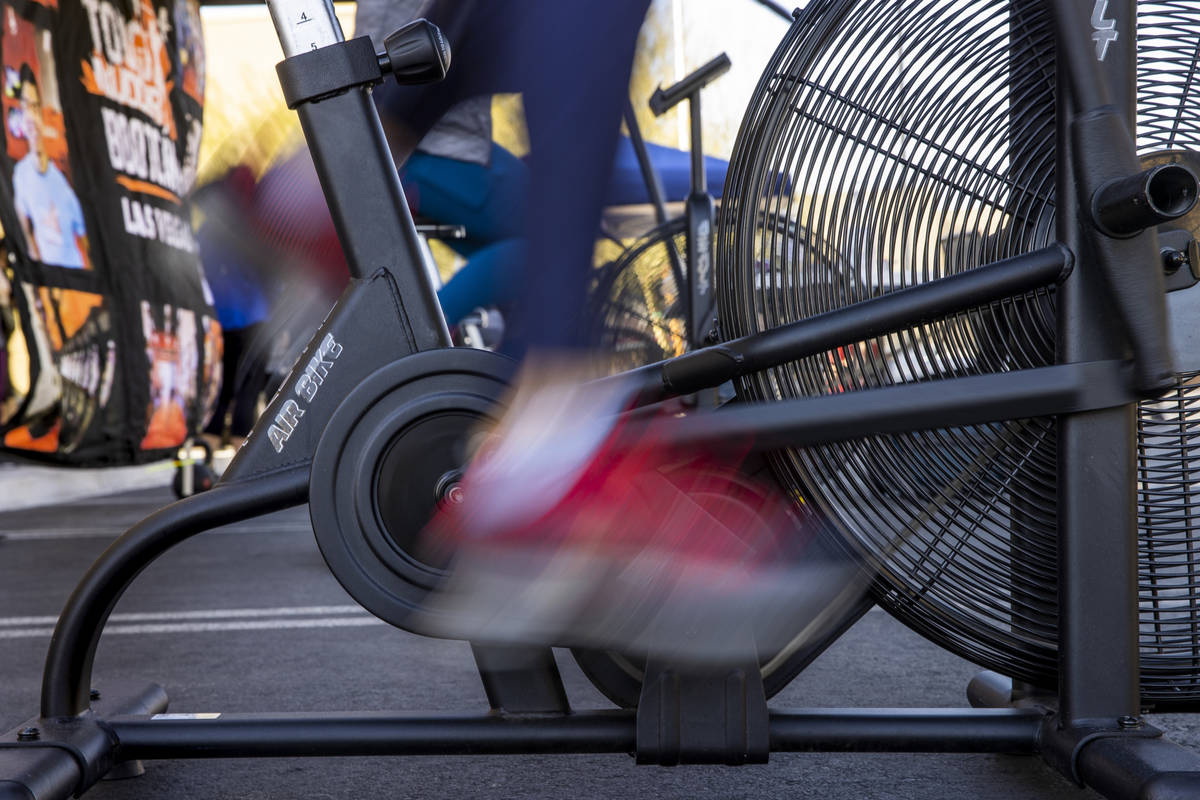 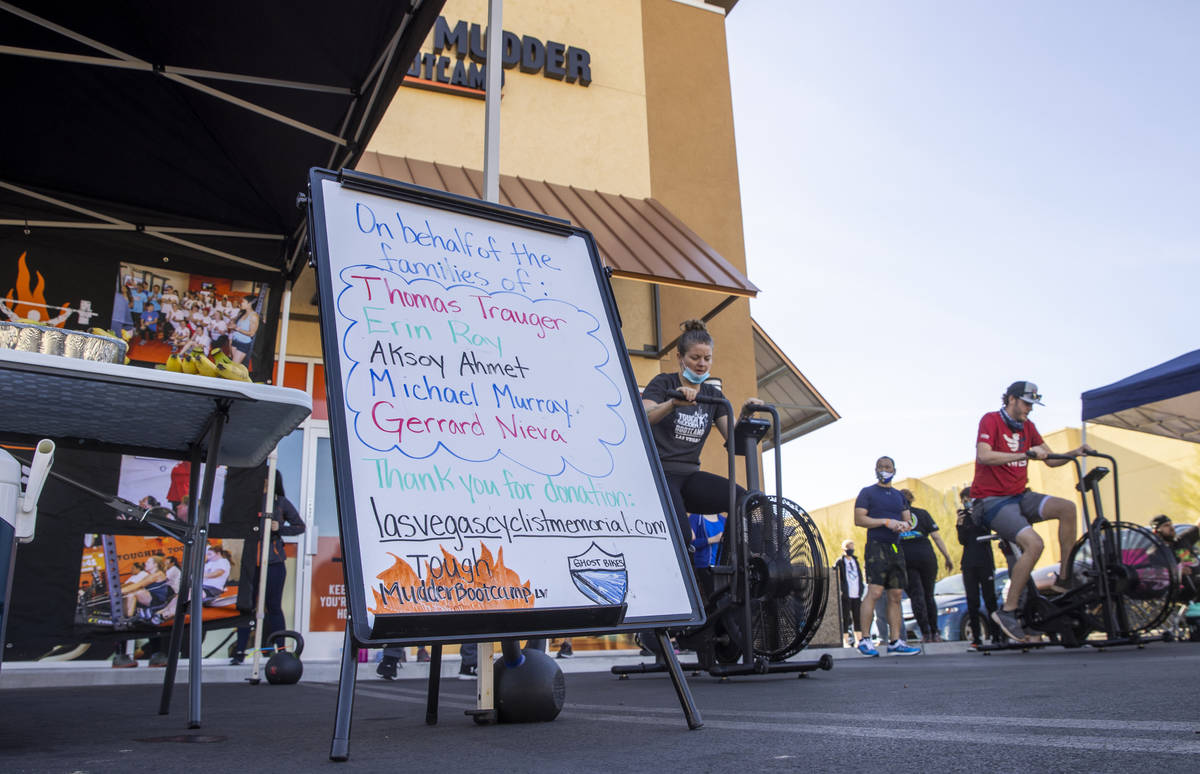 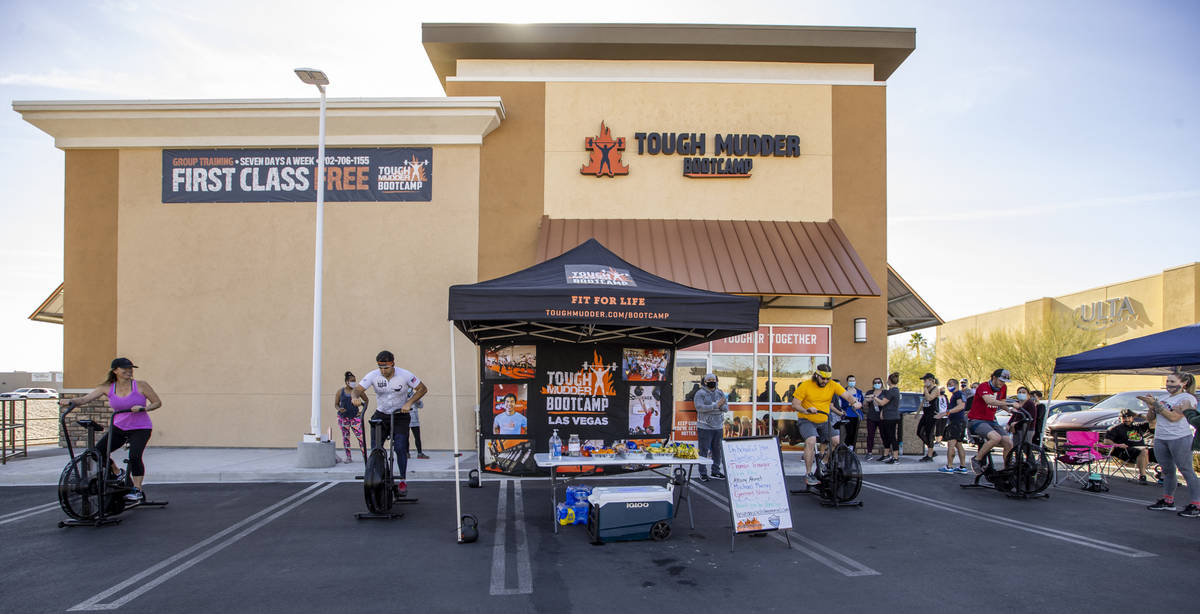 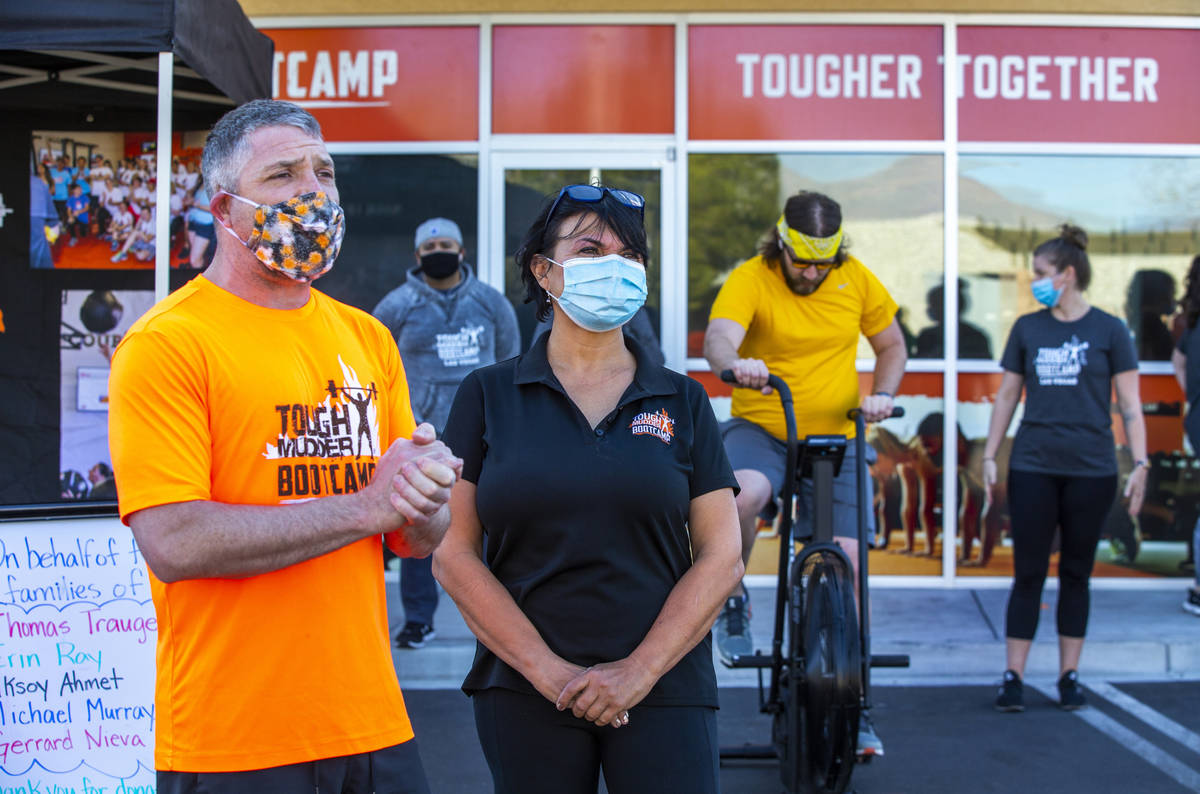 Marcy Gershin, 58, kept pedaling while waving her arms, as fellow members of the Tough Mudder Bootcamp gym, at 6311 N. Decatur Blvd., danced to “Wake Me Up Before You Go-Go” by Wham! Although the mood was cheerful, the gym members said they participated in the fundraiser Saturday afternoon because they were affected by the Dec. 10 fatal crash.

“It really takes a piece of your heart,” said 38-year-old Tyler Kock, who said he was drawn to attend the fundraiser even though, like most of the participants, he didn’t know anyone in the crash. “It kind of shows you how fragile life is.”

Cory Drumright, co-owner of the Tough Mudder Bootcamp gym, said the group was riding the stationary bicycles at least 96 miles, which is the distance the group of about 20 bicyclists had left on a roughly 130-mile ride when the crash happened. Drumright said the event was to encourage donations to the Las Vegas Cyclist Memorial Fund, which is run by Las Vegas bicycling organizations and is aimed at raising $1 million for the families of those killed and injured in the crash.

The bicyclists killed were Erin Michelle Ray, 39, Gerrard Suarez Nieva, 41, Michael Todd Murray, 57, Aksoy Ahmet, 48, and Tom Trauger, 57. They were killed when 45-year-old Jordan Barson, who was driving a box truck, crashed into the group of bicyclists and pinned them against an SUV that was acting as their safety vehicle, police say.

Barson had more than nine times the amount of methamphetamine in his system needed to be legally considered impaired at the time of the crash on U.S. Highway 95, near Searchlight, according to police and court reports. He is being held without bail in the Clark County Detention Center, and faces five counts of DUI resulting in death, two counts of DUI resulting in substantial bodily harm and seven counts of reckless driving, court records show.

In the aftermath of the crash, the Las Vegas bicycling community, which advocates have said is small and close-knit, have largely focused on the families of those killed and the need for drivers to be more aware of bicyclists on roads.

Gershin said she frequently works out at the Tough Mudder Bootcamp gym, but is too afraid to bicycle on roads because of tragedies like the December fatal crash.

“I hope they meet their goal of their $1 million to raise, and I really do hope that all of this brings about positive change,” Gershin said about the memorial fund.

As of Saturday afternoon, the memorial fund’s website was reporting $264,815 had been raised.

The memorial was organized by groups including Breakaway Cycling, Ghost Bikes Las Vegas, Save Red Rock and the Southern Nevada Bicycle Coalition. The fund has gathered donations from across the country, including a $5,000 donation from former professional cyclist Lance Armstrong and $5,000 from the Golden Knights, spokeswoman Stephanie Forté said Saturday.

Saturday’s fundraiser was also personal for Drumright, who met Ray about nine years ago and had spent time working out with her. He described the 39-year-old as an “extremely humble” woman whose “star shined very bright.”

“When I heard the news, it was like a sledgehammer to the chest,” he said about Ray’s death.

Next to a snack table stood a white board with the names of everyone who had died, as about a dozen participants encouraged each other to keep peddling.

“We’re going to finish the ride for them,” Drumright said.

Donations to the memorial fund can be made at lasvegascyclistmemorial.com.