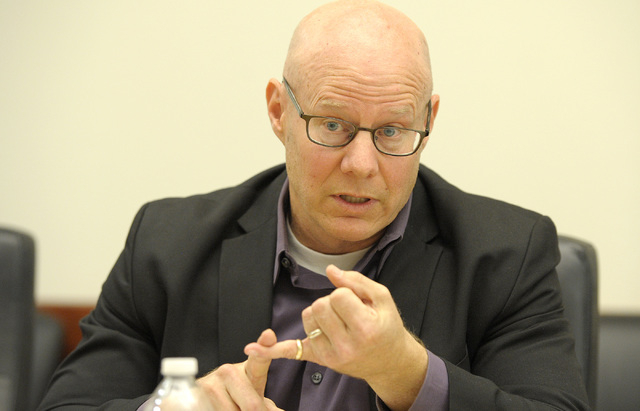 Jacob L. Snow, Henderson city manager, speaks during an interview with the Review-Journal editorial board on Thursday May 15, 2014. (Mark Damon/Las Vegas Review-Journal)

Henderson’s latest budget, which continues the trend of tapping reserves, goes before the City Council for approval Tuesday.

About $4.6 million will be pulled from the city’s vehicle purchasing and maintenance fund to fill operating gaps in the city’s $482.8 million fiscal 2015 budget, an ongoing practice city officials are aiming to end this year, Budget Manager Jill Lynch said.

City Councilman Sam Bateman said May 8 that only current revenues should be used for the operating budget going forward.

“We thought we’d be closer to balancing the budget this year, and we’ve had some revenue streams come in short,” Bateman said. “This is the last year we should be dipping into savings.”

The latest shortfall is driven by $2.8 million in lower-than-expected revenue from the city’s detention center, which has a contract to house detainees from U.S. Immigration and Customs Enforcement.

The city has moved $16.3 million from its municipal facilities fund to bridge previous funding gaps since 2012, but its $3.2 million balance was too low this year.

The new budget includes the estimated $2 million in service cuts and fee increases to parks and recreation operations approved May 6 by the City Council.

City Manager Jacob Snow has asked all departments to cut an additional $5 million from their budgets so the city can close its operating deficit.

The largest share of the budget is the $223.1 million in projected general fund expenditures, up from $213.2 million for the fiscal year ending June 30. The general fund pays for the city’s day-to-day operations and activities not covered by proprietary funds or special revenue, such as grants and special taxes. The general fund increase is driven by higher salaries and benefits.

Salary and benefits make up 82.4 percent of the projected general fund budget at $185.9 million, an increase from $179 million last budget. Public safety, which does not receive cost-of-living raises but still receives merit increases, will see pay and benefits increase $3.2 million.

The city is in negotiations with its six bargaining units, including the police and fire unions, whose contracts expire July 1. Only 508 of the city’s 1,850 employees are nonunion.

An additional $13.3 million in additional general government salary and benefits are projected to be paid out of other funds, including fuel and sales taxes.

The general fund is mostly financed by property taxes, sales tax, business licenses, franchise fees and city fees. About 55 percent of the general fund budget is for public safety, including police and fire.

The city’s general fund ending balance is projected to be $18.4 million, 8.3 percent of the fund’s budgeted revenues. The city also has $18.4 million in its rainy day fund.

The city is estimating a $4.3 million increase in sales tax revenues to $91.4 million, the highest since 2008. Henderson is expecting a slight bump in property taxes for all funds of nearly $1.1 million to $59.7 million in the new budget. That is still down, however, from the peak of $85.7 million in 2009.

Snow said Thursday any plans to bring a ballot question to Henderson voters to raise its residential property tax up to 20 cents per $100 of assessed value will not happen before 2015. Henderson’s property tax rate of 71 cents per $100 of assessed valuation is 35 cents lower than Las Vegas and 45 cents lower than North Las Vegas.

Any property tax increase approved by the voters would go toward the city’s $17 million annual infrastructure deficit, and not salary and benefits, Snow said.

This year’s $482.8 million budget is a sharp decrease from the $617 million budget in 2009. Snow said the budget has decreased while an estimated 19,000 more people have moved to the city during the past six years, making the population 280,400.