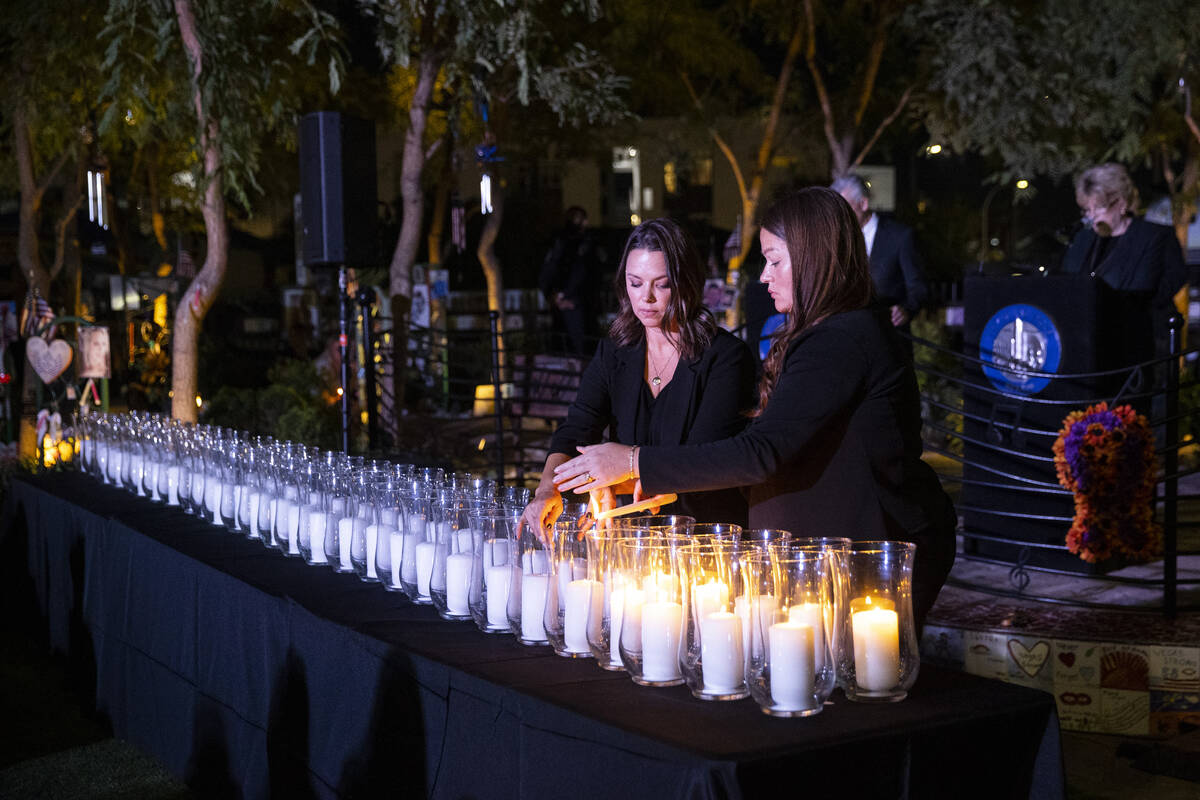 Las Vegas city employees Jasmine Freeman, left, special events administrator, and Marja Bigas, management analyst, light up a candle for reach of the victims of the Oct. 1, 2017, shooting after their name is read during a ceremony at the Las Vegas Community Healing Garden on Oct. 1, 2021. (Erik Verduzco / Las Vegas Review-Journal) @Erik_Verduzco

Clark County is hosting several events on Saturday, Oct. 1 to commemorate the fifth anniversary of the deadliest shooting in U.S. history.

The day will honor the 60 victims and thousands of survivors of the mass shooting, which unfolded across the street from Mandalay Bay on Oct. 1, 2017, the final night of the Route 91 Harvest music festival.

The Clark County Museum is expected to reopen its 1 October Remembrance Exhibit on Friday. The exhibit, “5 Years Later: Remembering 1 October & Becoming Vegas Stronger,” is scheduled to run through Jan. 30, beginning with a free public reception at 5 p.m. Friday.

The museum will display some of the items left at local spots in the days after the shooting, including letters, posters and at least one of the white crosses placed near the scene of the shooting and the “Welcome to Fabulous Las Vegas” sign. The museum also is seeking input from people who may have left those artifacts behind to help better tell their stories.

The county has plans to stream the ceremony on its social media accounts.

The Texas-based group Midland is set to headline a music festival that day at the Clark County Government Center amphitheater. The Country Strong Project and Stoney’s Rockin’ Country are hosting the Remember Music Festival. Doors open at 1 p.m., and the concert is set to begin at 2 p.m.

Meghan Patrick, Dylan Schneider and Walker Montgomery are among the singers expected to perform. Tickets are $85, and the proceeds will go toward creating the permanent 1 October Memorial.

Las Vegas Mayor Carolyn Goodman and the city’s communications director, David Riggleman, are expected to read the names of those who died as a result of the shooting. The reading begins at 10:05 p.m., commemorating the moment bullets descended on the crowd of concertgoers, at the Las Vegas Community Healing Garden.

The city of Las Vegas has plans to stream the reading on its social media channels.