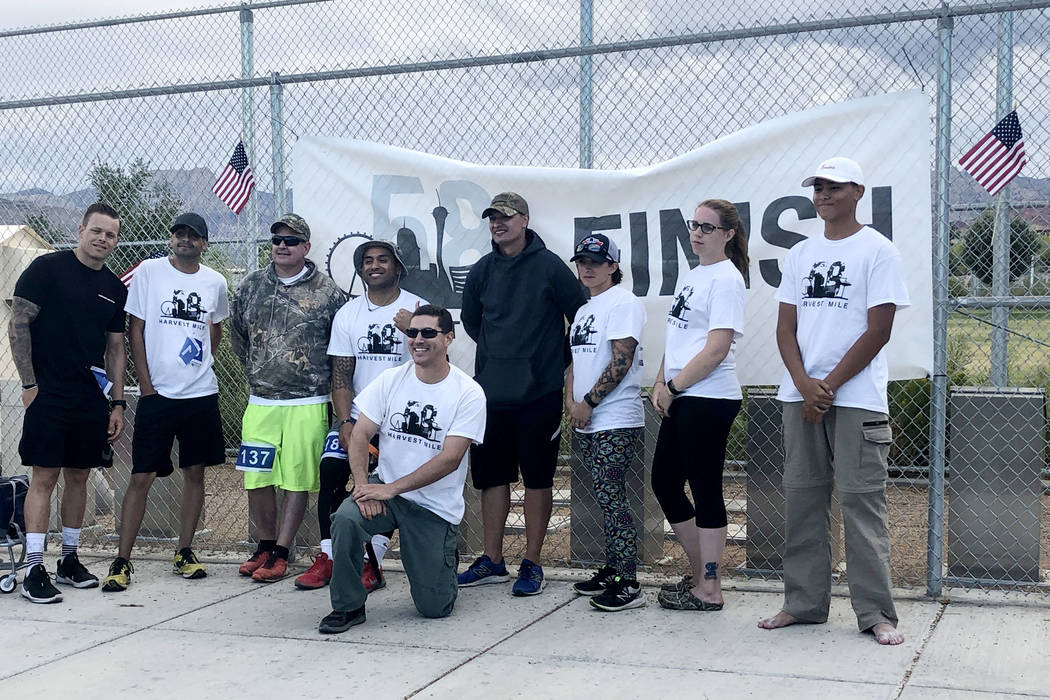 This year Hewitt did it all again and, just like last year, will donate the money he and a group of 12 others raise to scholarships for the children of the Oct. 1 mass shooting victims.

“I have no problem with continuing to do this over and over again as long as I’m helping these people, or wherever it takes me,” the 30-year-old said.

Hewitt, an Army recruiter, and his friend Michael Baggett both work in a Las Vegas Army recruitment office. Baggett said he had just moved to Las Vegas when a lone gunman on Oct. 1 shattered the city where Hewitt had grown up.

When Hewitt suggested recruiting active military personnel to take a hike to raise money for those who died, Baggett jumped on the idea to help his new home, leading the two to create the Harvest Mile organization.

“We were kind of outsiders looking in, in a way,” Baggett said of the military members who weren’t from the Las Vegas Valley, adding that they formed “a temporary community, but it is our community.”

On Saturday, the two friends organized the hike again, this time opening it up to civilians. A group of 13 left from West Career and Technical Academy on West Charleston Boulevard, not far from the Red Rock Canyon National Conservation Area, to walk 29 miles. They’ll do the same thing Sunday, walking 58 miles through the Red Rock area by the end of the weekend, one mile for each of the Oct. 1 shooting victims.

A 5K was also held Saturday morning to raise additional money. By 5:30 p.m., only eight of the original 13 finished the first day of the hike, Hewitt said Saturday.

“The 5K that we did, the turnout was a lot better than I expected,” he said, adding that a few of the people who planned on hiking 58 miles participated in the 5K instead.

Baggett said the task is not for the faint of heart, and they had to prepare with medics on hand if the civilians — or the military members — couldn’t handle it.

“Even with being in the Army, and you’re used to walking and carrying a load all the time, nothing can really prepare you for that 58 miles,” Baggett said.

The youngest of the group, 16-year-old Alex Ngo, finished first on Saturday and sat on the curb of a sidewalk afterward, his shoes kicked off and his brother’s white Chick-Fil-A hat next to him.

“I did all of it, and oh, man, it hurts,” said Ngo, who attends Foothill High School in Henderson.

Ngo’s older brother committed to joining the military during last year’s hike, which persuaded him to join the Army branch because they “had character,” the 16-year-old said.

His brother hiked 10 miles during the first day of 2017’s hike, and Ngo said he was determined to top his brother Saturday. But besides the sibling rivalry, Ngo was thinking of the Oct. 1 victims.

Ngo said he wanted to participate in the hike because “everything that you make is given to the children so they can go to college.”

Hewitt said the money goes to the Las Vegas Survivor Scholarship Fund to help the children of the Oct. 1 victims. Last year the group raised $15,000, and Baggett said that this year, about $8,000 was raised by Saturday evening.

The hikers said they plan to complete the entire 58 miles on Sunday. Mike Flores, who grew up in Vegas and works in Army recruitment with Hewitt and Baggett, said he would do his darnedest to finish, despite his blisters.