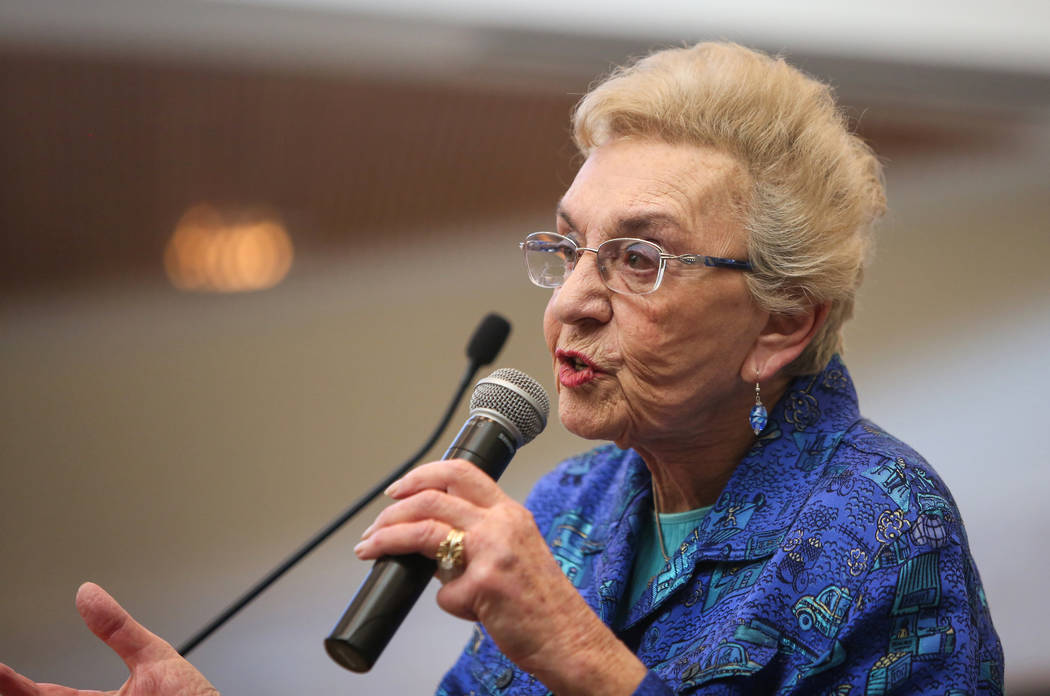 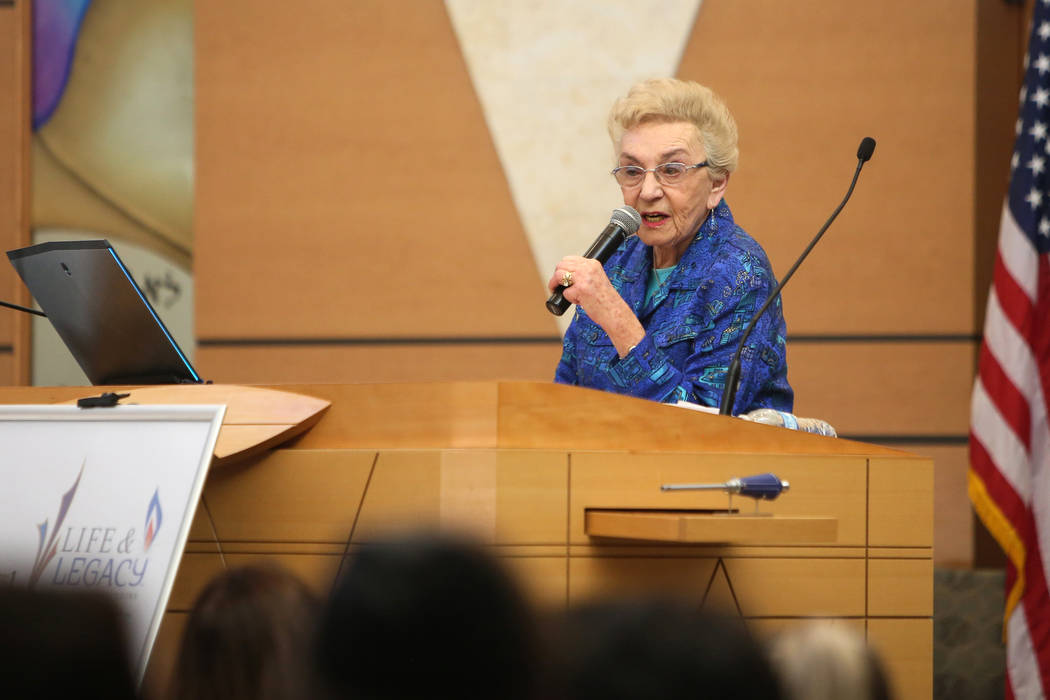 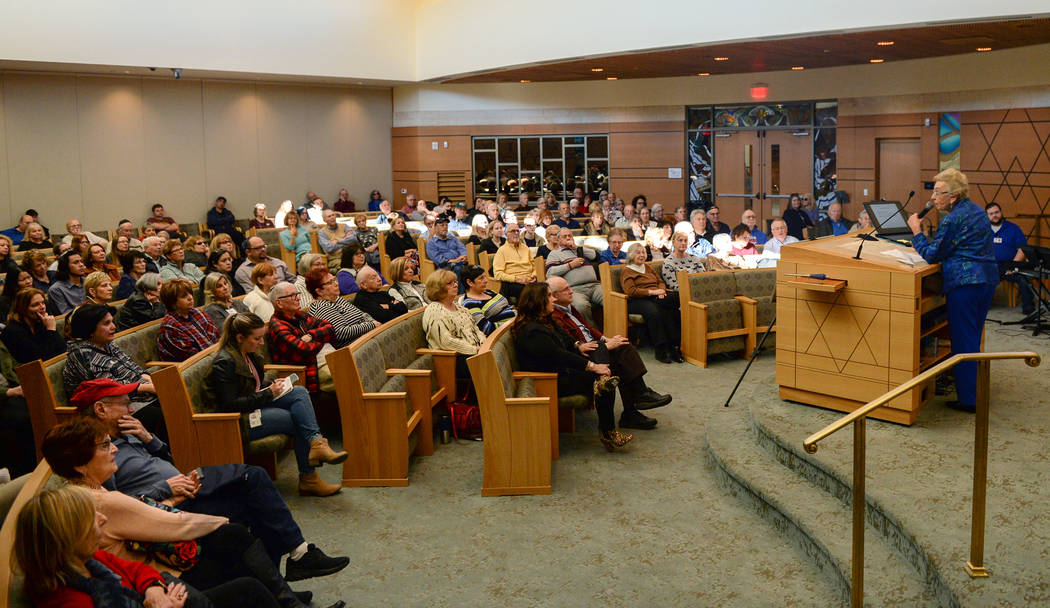 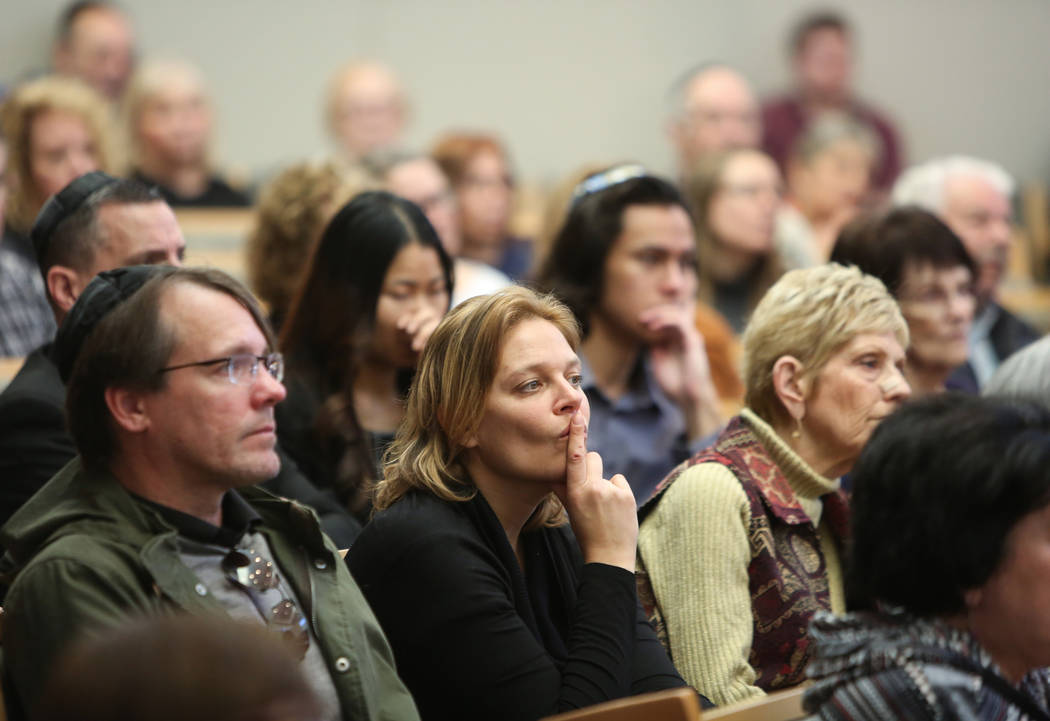 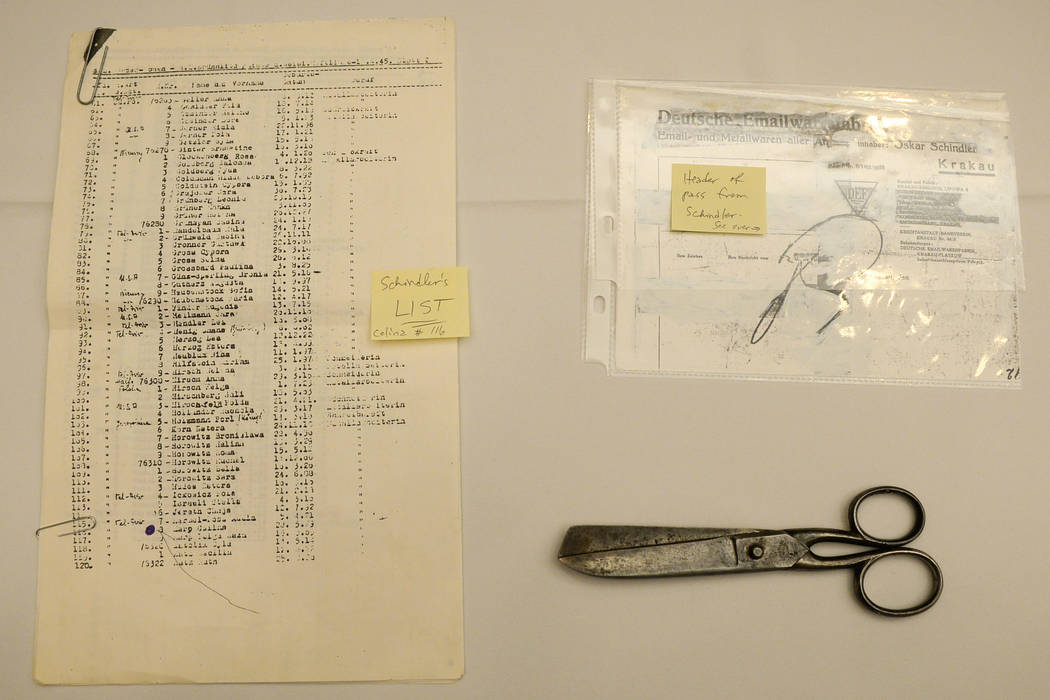 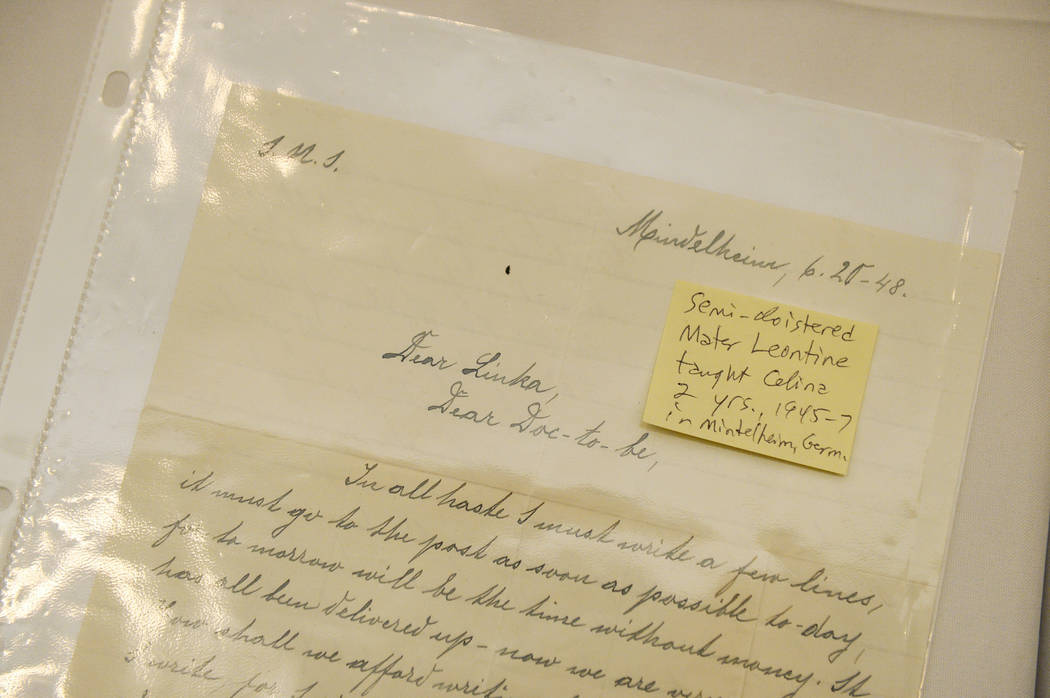 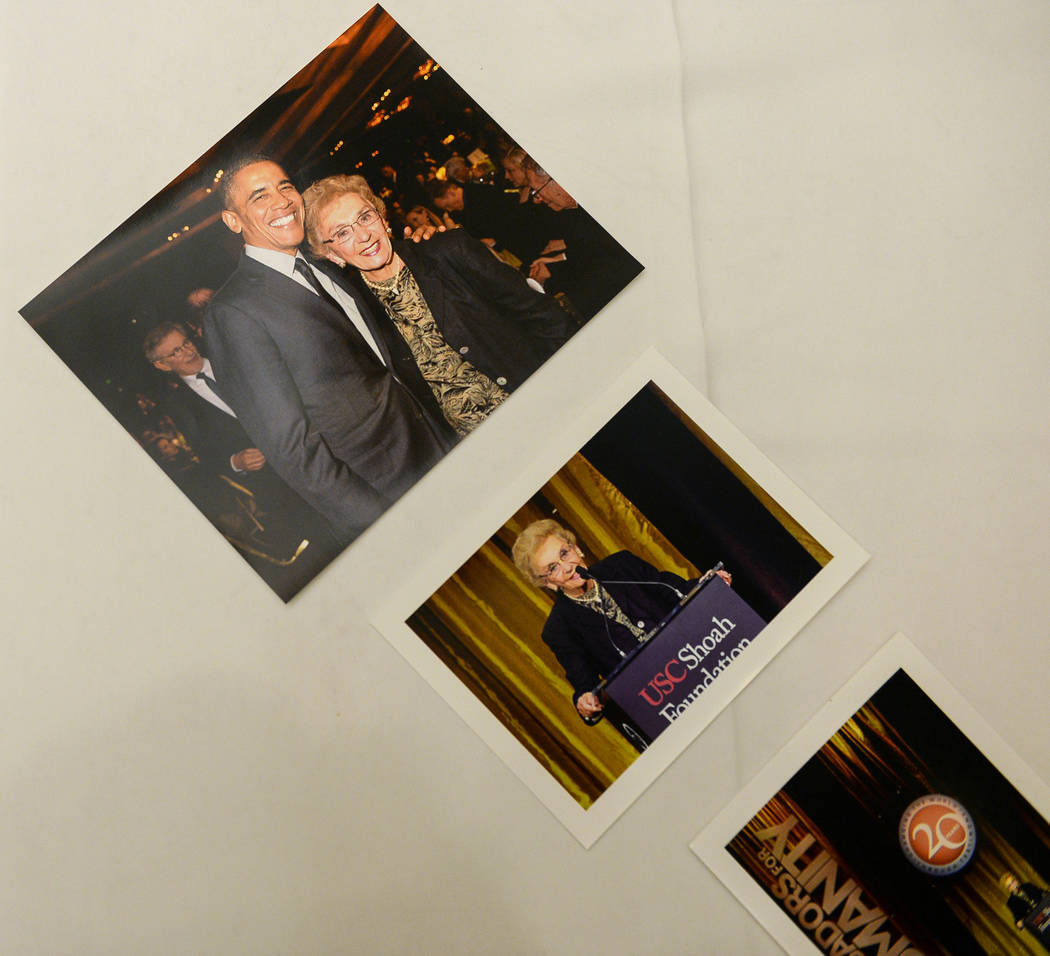 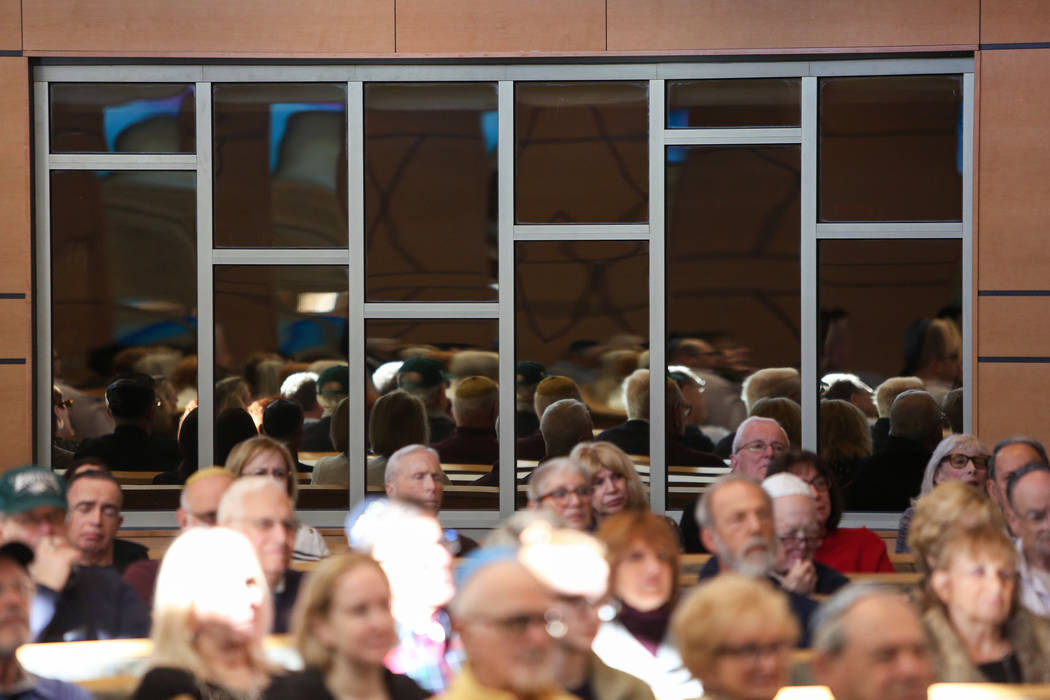 In a scene near the end of “Schindler’s List,” Jewish employees gather on a factory floor to hear a farewell speech from the man who saved them, Oskar Schindler.

Celina Karp Biniaz, 87, was on the factory floor in May 1945 when the actual speech was given, and she shared her story Sunday morning in Las Vegas at Temple Sinai, 9001 Hillpointe Road.

“He really had tears in his eyes, talking about wishing that he had had more money, that he could have saved more people,” Biniaz said of Schindler, who operated a factory in Nazi Germany-occupied Czechoslovakia. Schindler had bribed German officials for the release of about 1,200 Jewish people to work in his factory.

Biniaz was 13 when Germany surrendered in 1945, and the people in Schindler’s factory were liberated. Shortly after, Schindler fled with his wife. Before he did, he gave each Jewish family two bolts of fabric and five pairs of scissors, Biniaz said.

“We bartered four of the pairs of scissors for life in Krakow (Poland),” she said. “One pair of scissors I’ve kept.”

On Sunday, Biniaz brought with her a red coffee mug that her mother drank from while in a concentration camp, along with the pair of scissors from Schindler. More than 50 people at Temple Sinai listened as Biniaz recounted her journey, from living in a ghetto in German-occupied Poland as a young girl to teaching elementary school in the U.S.

Between 1945 and 1947, her family moved among Czechoslovakia, Poland and Germany. While in Germany, Biniaz learned English and German from a Catholic nun, whom she credits for teaching her to let go of her resentment.

“She truly helped me realize that hatred is very corrosive and that you have to work through it in order to move forward in life,” Biniaz said.

In 1947, Biniaz and her parents traveled on a ship across the Atlantic Ocean. When they arrived in New York, she was surprised by the pristine state of the buildings, she said.

“I fled from a devastated Europe. Everything was in shards. Everything was broken. There were no houses standing up,” Biniaz said. “And when you end up in New York, Times Square, beautifully lit up, with all the programs going on, it was just incredible rejuvenation for me.”

An uncle from Iowa met the family in New York and drove them to Des Moines, where Biniaz was placed in the 12th grade. She had no formal education after second grade, she said. Instead, she had bartered her family’s rations — coffee, cigarettes, soap and chocolate — for tutoring.

Biniaz accepted a scholarship to Grinnell College in Iowa and would become a schoolteacher.

“When I was teaching elementary school it was an incredible, wonderful affair for me because I was reliving my childhood with the children that I was teaching,” Biniaz said.

She eventually married and had two children, but she rarely spoke about her experience during World War II until after Schindler’s story was popularized in 1993 by Steven Spielberg’s Academy Award-winning movie.

Biniaz, who lives in Camarillo, California, said the movie gave her a voice. Before it was released, people could not fathom what she had been through, she said.

“There was no point of reference. Nobody would understand what it was like to be in a concentration camp,” Biniaz said. “They would ask such questions as, ‘Were you cold?’ ‘Were you hungry?’ Inappropriate questions.”

Her own kids did not know their mother’s story until they were 11 and 13 years old. “I wanted them to have a happy childhood,” she said.

Rhonda Schwartz, 60, grew emotional as she sat in the fourth row Sunday morning. The Holocaust and World War II were part of her religious education, Schwartz said, but she fears that young people today aren’t being taught the same stories in the classroom.

“When I grew up, history was a textbook, and you learned dates and places and a few names here and there,” Schwartz said. “You can only truly know the history if you hear it from the personal stories of the people who live it.”